Bridges to Independence: Fostering the Independence of New Investigators in Biomedical Research (2005)

Get This Book
Visit NAP.edu/10766 to get more information about this book, to buy it in print, or to download it as a free PDF.
« Previous: 6 Establishing Stable Research Programs
Page 118 Share Cite
Suggested Citation:"7 Conclusion." National Research Council. 2005. Bridges to Independence: Fostering the Independence of New Investigators in Biomedical Research. Washington, DC: The National Academies Press. doi: 10.17226/11249.
×

The career structure of academic biomedical research is, in many ways, a byproduct of the funding programs offered by the National Institutes of Health (NIH) and of imbalances in biomedical labor markets to which NIH may contribute. As the major source of support for biomedical research in the United States, the NIH has great influence in defining not only the specific research projects that are conducted, but also the environments in which that research is conducted and the scientists who conduct it. As NIH implements the NIH Roadmap, it must ensure that the vision outlined in the Roadmap can be sustained with a successful group of independent investigators to carry biomedical research into the future.

Although the current NIH system has very successfully stimulated groundbreaking biomedical research, there are growing concerns that it may not do as much as it could to foster the development of the next generation of investigators to conduct this research. In particular, scientists are now usually into their 40s before they have an opportunity for independent thought and the freedom to direct their own research. This delay runs the risk of discouraging promising young scientists from pursuing careers in biomedical research as they see greater opportunities for independence in other sectors. Moreover, new investigators may be less likely to engage in higher-risk research projects since they do not have the freedom to blaze their own path and must satisfy study sections that have an inherent bias toward research programs with a greater probability of

success.1 These challenges affect not only the new investigators themselves, but also threaten the health and vitality of the entire biomedical research enterprise.

There is need to act now. Not only can postdoctoral researchers and new investigators be impacted immediately, but the long-term effect on the biomedical workforce may only be fully manifest after a significant time. It may take 12–14 years for scientists to move from undergraduate years to an independent position. This is but one reason to have a continual source of current data on the scientific workforce to measure the ongoing effect of any efforts made to address these challenges. To that end, data collection on the biomedical workforce and how all individuals move through the grants system must be enhanced significantly. It is impossible to make informed programmatic decisions without accurate numbers of who is being supported, by what mechanism, and with what impact.

In this report, the committee has considered three different stages of biomedical careers—postdoctoral training, the transition to independence itself, and the establishment of stable research programs—and it offers recommendations appropriate to each career stage (Figure 7-1). The steps focus on fostering investigator independence and positioning investigators to continue that independence throughout their research career. “Independence” means not only independence of funding, but independence of thought; this broadening of the definition takes into account the new realities of biomedical research, including the development of large research teams and the growth of non-tenure-track research positions.

The committee has considered recommendations from previous reports made on these issues and examined the challenges that have prevented successful implementation. As such, many of the recommendations presented in this report have largely already been subjected to at least one round of testing and revision. The committee has also examined existing programs and models inside and outside the NIH to identify elements that appear to meet with success. The recommendations presented here incorporate these ideas.

In conclusion, this report presents an overview of biomedical research careers and strategies for recruiting, retaining, and supporting new investigators in biomedical research. While recognizing the realities of the present situation, it offers a vision for the future that will help ensure the continued vitality of the biomedical research enterprise and its workforce. 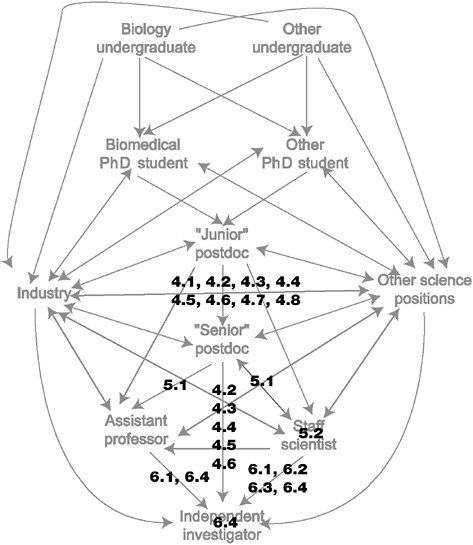 FIGURE 7-1 Transition and career stages addressed by recommendations in the report. While biomedical career pathways are still quite complicated, the report helps to move researchers from postdoctoral positions to that of independent investigator.

The recommendations are bold, but realistic and practical. Their successful implementation relies not only upon the actions of the NIH, but also on the participation of all stakeholders in biomedical and academic research. Working together, the stakeholders can meet their responsibility to provide a bridge to independence by helping to foster the independence of new investigators in biomedical research.

Next: References »
Bridges to Independence: Fostering the Independence of New Investigators in Biomedical Research Get This Book
× 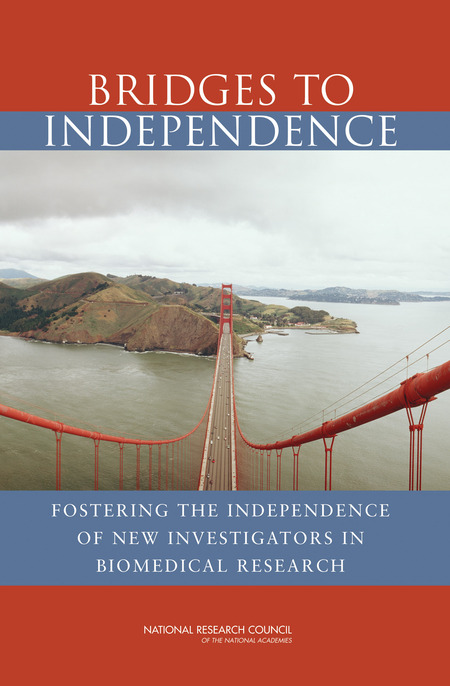 A rising median age at which PhD’s receive their first research grant from the National Institutes of Health (NIH) is among the factors forcing academic biomedical researchers to spend longer periods of time before they can set their own research directions and establish there independence. The fear that promising prospective scientists will choose other career paths has raised concerns about the future of biomedical research in the United States. At the request of NIH, the National Academies conducted a study on ways to address these issues. The report recommends that NIH make fostering independence of biomedical researchers an agencywide goal, and that it take steps to provide postdocs and early-career investigators with more financial support for their own research, improve postdoc mentoring and establish programs for new investigators and staff scientists among other mechanisms.