Get This Book
Visit NAP.edu/10766 to get more information about this book, to buy it in print, or to download it as a free PDF.
« Previous: 2.4 FINDINGS AND RECOMMENDATIONS
Page 38 Share Cite
Suggested Citation:"3 SPENT FUEL POOL STORAGE ." National Research Council. 2006. Safety and Security of Commercial Spent Nuclear Fuel Storage: Public Report. Washington, DC: The National Academies Press. doi: 10.17226/11263.
×

The first two of these objectives could be compromised by a terrorist attack that partially or completely drains the spent fuel pool.2 The committee will refer to such scenarios as “loss-of-pool-coolant” events. Such events could have several deleterious consequences; Most immediately, ionizing radiation levels in the spent fuel building rise as the water level in the pool falls. Once the water level drops to within a few feet (a meter or so) of the tops of the fuel racks, elevated radiation fields could prevent direct access to the immediate areas around the lip of the spent fuel pool building by workers. This might hamper but would not necessarily prevent the application of mitigative measures, such as deployment of fire hoses to replenish the water in the pool.

The ability to remove decay heat from the spent fuel also would be reduced as the water level drops, especially when it drops below the tops of the fuel assemblies. This would cause temperatures in the fuel assemblies to rise, accelerating the oxidation of the zirconium alloy (zircaloy) cladding that encases the uranium oxide pellets. This oxidation reaction can occur in the presence of both air and steam and is strongly exothermic—that is, the reaction releases large quantities of heat, which can further raise cladding temperatures. The steam reaction also generates large quantities of hydrogen:

These oxidation reactions can become locally self-sustaining (i.e., autocatalytic3) at high temperatures (i.e., about a factor of 10 higher than the boiling point of water) if a supply of oxygen and/or steam is available to sustain the reactions. (These reactions will not occur when the spent fuel is under water because heat removal prevents such high temperatures from being reached). The result could be a runaway oxidation reaction—referred to in this report as a zirconium cladding fire—that proceeds as a burn front (e.g., as seen in a forest fire or a fireworks sparkler) along the axis of the fuel rod toward the source of oxidant (i.e., air or steam). The heat released from such fires can be even greater than the decay heat produced in newly discharged spent fuel.

As fuel rod temperatures increase, the gas pressure inside the fuel rod increases and eventually can cause the cladding to balloon out and rupture. At higher temperatures (around 1800°C [approximately 3300°F]), zirconium cladding reacts with the uranium oxide fuel to form a complex molten phase containing zirconium-uranium oxide. Beginning with the cladding rupture, these events would result in the release of radioactive fission gases and some of the fuel’s radioactive material in the form of aerosols into the building that houses the spent fuel pool and possibly into the environment. If the heat from one burning assembly is not dissipated, the fire could spread to other spent fuel assemblies in the pool, producing a propagating zirconium cladding fire.

The high-temperature reaction of zirconium and steam has been described quantitatively since at least the early 1960s (e.g., Baker and Just, 1962), The accident at the Three Mile Island Unit 2 reactor and a set of experiments (e.g., CORA, FPT 1–6, CODEX, ORNL-VI, VERCORS) have provided a basis for understanding the phenomena of zirconium cladding fires and fission-product releases from irradiated fuel in a reactor core accident. This understanding and data from the experiments form the foundation for computer simulations of severe accidents involving nuclear fuel. These experiments and computer simulations are for inside-reactor vessel events rather than events in an open-air spent fuel pool array.

This chapter examines possible initiating factors for such loss-of-pool-coolant events and the potential consequences of such events. It is organized into the following four main sections: 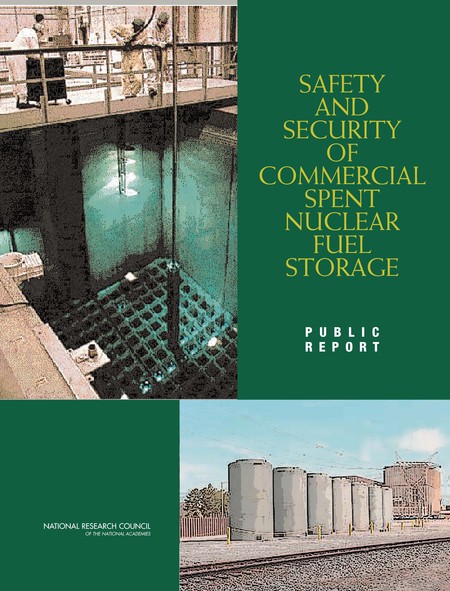 In response to a request from Congress, the Nuclear Regulatory Commission and the Department of Homeland Security sponsored a National Academies study to assess the safety and security risks of spent nuclear fuel stored in cooling pools and dry casks at commercial nuclear power plants. The information provided in this book examines the risks of terrorist attacks using these materials for a radiological dispersal device. Safety and Security of Commercial Spent Nuclear Fuel is an unclassified public summary of a more detailed classified book. The book finds that successful terrorist attacks on spent fuel pools, though difficult, are possible. A propagating fire in a pool could release large amounts of radioactive material, but rearranging spent fuel in the pool during storage and providing emergency water spray systems would reduce the likelihood of a propagating fire even under severe damage conditions. The book suggests that additional studies are needed to better understand these risks. Although dry casks have advantages over cooling pools, pools are necessary at all operating nuclear power plants to store at least the recently discharged fuel. The book explains it would be difficult for terrorists to steal enough spent fuel to construct a significant radiological dispersal device.