Systematics and the Origin of Species: On Ernst Mayr's 100th Anniversary (2005)

Get This Book
Visit NAP.edu/10766 to get more information about this book, to buy it in print, or to download it as a free PDF.
« Previous: Front Matter
Page 1 Share Cite
Suggested Citation:"1 Introductory Essay: Systematics and the Future of Biology--EDWARD O. WILSON." National Academy of Sciences. 2005. Systematics and the Origin of Species: On Ernst Mayr's 100th Anniversary. Washington, DC: The National Academies Press. doi: 10.17226/11310.
×

1
Introductory Essay: Systematics and the Future of Biology

Biology is a science of three dimensions. The first is the study of each species across all levels of biological organization, molecule to cell to organism to population to ecosystem. The second dimension is the diversity of all species in the biosphere. The third dimension is the history of each species in turn, comprising both its genetic evolution and the environmental change that drove the evolution. Biology, by growing in all three dimensions, is progressing toward unification and will continue to do so. A large part of the future of biology depends on interdisciplinary studies that allow easy travel across the three dimensions.

Molecular and cellular biology, the subdisciplines of maximum support and activity today, occupy the two lowest levels of biological organization. They are focused on the first dimension in a small set of model species, selected primarily for their ease of culturing and the special traits that make them amenable for different kinds of analysis. The triumph of molecular and cellular biology has been the documentation of one of the two overarching principles of biology: that all living phenomena are obedient to the laws of physics and chemistry. The other overarching principle of biology is that all living phenomena originated and evolved by natural selection. That, in turn, has been the triumph of organismic and evolutionary biology.

Viewed in the framework of the history of biology, the subdisciplines

of molecular and cellular biology are in the natural history period of their development. This perhaps surprising characterization can be clarified with the following metaphor. The cell is a system consisting of a very large number of interacting elements and processes. It can be compared to a conventional ecosystem, such as a lake or forest, in this sense: Researchers are discovering the anatomy and functions of the vast array of molecules, the equivalent of the species of plants and animals in ecosystems, that compose the cell. These scientists are the Humboldts, the Darwins, the Mayrs, and other explorer-naturalists in a new age, and of a new kind. Mercifully free of mosquito bites and blistered feet, they press forward into the unmapped regions at the lowest levels of biological organization. They are not in the business of creating fundamental principles, which they take mostly from physics and chemistry. Their spectacular success has come instead from technology invented and applied with creative genius. They render visible, by crystallography, immunology, genic substitution, and other methods, the anatomy and functions of the ultramicroscopic inhabitants of the cell, which are otherwise entirely beyond the range of the unaided human senses. They aim and can be expected in time to join with researchers in other subdisciplines of biology to develop the fundamental principles of biological organization.

There remains the rest of biology, the vast and mostly unexplored upper reaches of the first dimension (levels of organization), and the little known second dimension (diversity) and third dimension (evolution). These domains do not belong to the past of biology, nor are they antiquated and declining in any manner or to any degree whatsoever, as is sometimes misperceived. They are, in large part, the future of biology. Probably <10% of species on the planet have been discovered, and of these only a tiny fraction—<1%—have been addressed with more than a cursory anatomical description.

Keep in mind that each species is unique in its genotype, proteome, behavior, history, and environmental relationship to other species. Until we learn more about the immense array of Earth’s little known and entirely unknown species, how they came into being, and what they are doing in the biosphere, the development of the rest of biology, including molecular and cellular biology, will be vastly incomplete. A further consequence of the imbalance is that the relation of humanity to the rest of the biosphere will stay largely uncharted territory. And the means to save and manage the living environment for the long term will remain very much a guessing game.

The proportionate shortfall of the disciplines can be expressed in practical terms as follows. A large part of the success of molecular and cellular biology is due to their relevance to medicine. In public perception and support, they are virtually married to medicine. Hence, molecular and

cellular biology are rich not so much because they have been successful; rather, they are successful because they have been rich. What needs to be appreciated for the future of organismic and evolutionary biology in practical terms is that where molecular and cellular biology are vital to personal health, organismic and evolutionary biology are vital to environmental health, and thence also to personal health.

The exploration of life on this little known planet needs to be made the equivalent of the Human Genome Project. It should bean all-out effort that sets the global biodiversity census as a goal with a timetable and not just a result eventually to be reached. In fact, the technology now exists to speed exploratory and monographic systematics by at least an order of magnitude. This technology includes high-resolution digital photography with computer-aided automontaged depth of focus for even the smallest and hence most highly magnified specimens. As a practicing systematist, I am certain that the first order of business must be to thoroughly photograph representatives of all species for which either type specimens or indisputably authenticated substitutes exist. The images can then be published on the Internet for immediate access on command, available to anyone, at any time, anywhere in the world.

Such virtual type collections can in most cases remove most of the time-consuming necessity of visiting museums or securing loans of often fragile specimens. Combined with online reproductions of the original published descriptions and earlier monographs, they will accelerate the identification of vast numbers of specimens now backed up in unprocessed collections around the world. They will also allow the rapid preparation of revisionary monographs, local biodiversity analyses, and the publication of made-to-order field guides.

Systematics is now in the early stages of a technology-driven revolution. A conference of biodiversity and informatics leaders held at Harvard University in 2001 agreed that by using new methods already available and including genomics, systematists have the capacity to complete or nearly complete a global biodiversity survey within a single human generation—25 years—at about the cost of the Human Genome Project. To give a better feel for the magnitude of this biological moon shot, consider that whereas very roughly 10% of Earth’s species (out of, say, 15–20 million extant) have been discovered and named in the past 250 years since Linnaeus inaugurated the hierarchical and binomial system of classification, now it seems possible that the remaining 90% can be so covered in 1/10th of that time.

If such a goal seems out of reach, consider that perhaps 1million species of all kinds, mostly eukaryotes, have type specimens in good enough condition for electronic republication. The New York Botanical Garden has already processed and put online the types of 90,000 plant

species, and Harvard’s Museum of Comparative Zoology is well on its way to processing ≈28,000 insect species. Thus, even in its earliest stages, at only two institutions, the republication program has already reached the hypothetical 10% level.

A new global systematics initiative is under way on three fronts. The first is the all-species program, which aims to measure the full breadth of biodiversity in all of the three recognized domains, the Bacteria, Archaea, and Eucarya, by using new and future technology. The next is the Encyclopedia of Life, expanding the all-species program by providing an indefinitely expansible page for each species and containing information either directly available or by linkage to other databases. The final and rapidly growing body of knowledge is the Tree of Life, the reconstructed phylogeny of life forms in ever finer detail, with particular reliance on genomics.

The upper levels of biological organization, from organism to ecosystem, the mapping and analysis of biodiversity, and the development of the Tree of Life all of the way from genes to species will eventually amount to most of biology. These proportionately still-neglected domains, therefore, offer intellectual stock of substantial growth potential to universities and other research-oriented organizations that invest in them now. It is still relatively easy to provide leadership at the cutting edge of biology extended beyond the molecular and cellular levels of a few species. The cost would be low, and the returns to scale incalculably great.

Next: Part I--THE ORIGINS OF SPECIES BARRIERS: 2 The Genetic Basis of Reproductive Isolation: Insights from Drosophila--H. ALLEN ORR »
Systematics and the Origin of Species: On Ernst Mayr's 100th Anniversary Get This Book
× 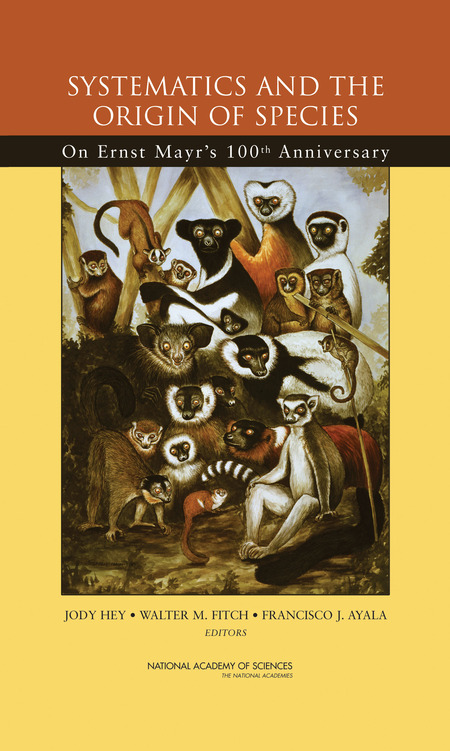 In December 2004, the National Academy of Sciences sponsored a colloquium on “Systematics and the Origin of Species” to celebrate Ernst Mayr’s 100th anniversary and to explore current knowledge concerning the origin of species. In 1942, Ernst Mayr, one of the twentieth century’s greatest scientists, published Systematics and the Origin of Species, a seminal book of the modern theory of evolution, where he advanced the significance of population variation in the understanding of evolutionary process and the origin of new species. Mayr formulated the transition from Linnaeus’s static species concept to the dynamic species concept of the modern theory of evolution and emphasized the species as a community of populations, the role of reproductive isolation, and the ecological interactions between species.

In addition to a preceding essay by Edward O. Wilson, this book includes the 16 papers presented by distinguished evolutionists at the colloquium. The papers are organized into sections covering the origins of species barriers, the processes of species divergence, the nature of species, the meaning of “species,” and genomic approaches for understanding diversity and speciation.