After the BEIR VII committee’s draft report had been reviewed by the Review Panel, an additional paper was submitted for its consideration (Cardis 2005). This publication provides results from a multinational collaborative study coordinated by the International Agency for Research on Cancer (IARC) and updates and supersedes the three-country study referred to in this report (IARC 1995). This new IARC 15-country study included almost 600,000 individually monitored workers from 15 countries (Australia, Belgium, Canada, Finland, France, Hungary, Japan, Korea, Lithuania, Slovakia, Spain, Sweden, Switzerland, the United Kingdom, and the United States). The main analyses included 407,391 nuclear industry workers who were employed for at least one year in a participating facility and who were monitored individually for external radiation. The total duration of follow-up was 5,192,710 person-years, and the total collective recorded dose was 7892 Sv, almost exclusively from external photon exposure. Most workers in the study were men (90%), who received 98% of the collective dose. The overall average cumulative recorded dose was 19.4 mSv. The distribution of recorded doses was skewed: 90% of workers received cumulative doses of less than 50 mSv, and less than 0.1% received cumulative doses of greater than 500 mSv. The study included a comprehensive study of errors in doses. The major sources of errors were quantified and taken into account in the risk estimates.

The excess relative risk estimate for all cancers excluding leukemia was reported as 0.97 Gy−1 (95% CI 0.14, 1.97) and for all solid cancers 0.87 Gy−1 (95% CI 0.03, 1.88). These estimates are somewhat higher than, but statistically compatible with, the estimates on which current radiation protection recommendations are based. Analyses of smoking-and non-smoking-related causes of death indicate that although confounding by smoking may be present, it is unlikely to explain all of this increased risk.

The excess relative risk estimate for leukemia excluding chronic lymphocytic leukemia was reported as 1.93 Gy−1 (95% CI <0, 8.47). This estimate, although not statistically significantly elevated, is close to that observed in previous nuclear workers studies.

Next: References »
Health Risks from Exposure to Low Levels of Ionizing Radiation: BEIR VII Phase 2 Get This Book
× 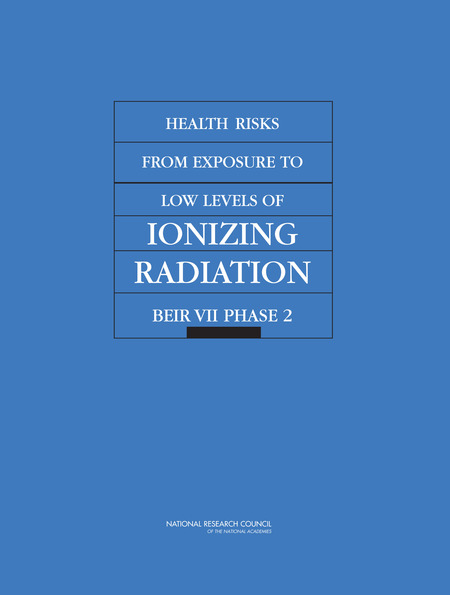