Get This Book
Visit NAP.edu/10766 to get more information about this book, to buy it in print, or to download it as a free PDF.
« Previous: Appendix A Statement of Task
Page 183 Share Cite
Suggested Citation:"Appendix B Committee Biographies." National Research Council. 2005. Critical Needs for Research in Veterinary Science. Washington, DC: The National Academies Press. doi: 10.17226/11366.
×

James E. Womack (chair) is a distinguished professor and the director of the Center for Animal Biotechnology and Genomics at Texas A&M University. He received his BS in mathematics education from Abilene Christian College and his PhD in genetics from Oregon State University. His research interest is comparative mammalian genomics, particularly comparative mapping of the bovine genome and the genomes of humans and mice. He launched the discipline of livestock genomics with his initial map of the bovine genome and the demonstration of extensive chromosomal conservation in cattle, humans, and mice. His international leadership resulted in a comprehensive bovine linkage map and the first genetic mapping of economically important traits in cattle. Dr. Womack is a fellow of the American Association for the Advancement of Science. He has received numerous awards, including the CIBA Prize for Research in Animal Health (1993) and the Wolf Prize in Agriculture (2001). He was a member of the National Research Council Steering Committee for Exploring Horizons for Domestic Animal Genomics.

Lynn C. Anderson is executive director of consulting and staffing services at Charles River Laboratories, Inc. She earned her DVM from Iowa State University and is certified by the American College of Laboratory Animal Medicine. Before joining Charles River Laboratories, she was executive director of global research safety and compliance at Merck Research Laboratories, and before that, she held management positions with Amgen and 3M, was an assistant professor of laboratory medicine and pathology at the University of Minnesota Medical School, and practiced small-animal medicine. She served as president of the

Leonard S. Bull is professor of animal science and associate director of the Animal and Poultry Waste Management Center at North Carolina State University. He received his BS and MS in dairy science and dairy cattle nutrition, respectively, from Oklahoma State University and his PhD in animal nutrition from Cornell University. His research interests include food-animal production systems; animal nutrition, especially protein and energy metabolism in ruminants; ruminal fiber digestion; and animal-waste management. Dr. Bull served as president of the American Society of Animal Sciences (1997-1998) and vice president of the North American chapter of the World Association for Animal Production (1998-2003). He is a fellow of the American Association for the Advancement of Science and the American Society of Animal Science. He chaired the National Research Council Subcommittee on Nitrogen Usage in Ruminants and served on the Board on Agriculture and Natural Resources (1995-1997).

Charles C. Capen is a distinguished university professor in the Department of Veterinary Biosciences at Ohio State University. He has chaired his department (the Department of Veterinary Pathobiology until the integrated Department of Veterinary Biosciences was established in 1994) since 1982 and was acting chair for a year before that. He joined the faculty in 1965 after serving as an instructor for 5 years while pursuing his PhD in veterinary pathology. He also earned his MS at Ohio State University and his DVM at Washington State University. Dr. Capen is renowned for his work in the use of animal models to study human diseases and was elected to the Institute of Medicine in 1992. He has received dozens of honors, including being named a distinguished member of the American College of Veterinary Pathologists—one of only 22 diplomates of 1,300 in the college to receive such a designation. He also received Ohio State’s Distinguished Scholar Award in 1993. He served on the National Research Council Committee on Review of the Smithsonian Institution’s National Zoological Park and the committee to Assess the Health Implications of Perchlorate Ingestion.

Disease Center. Dr. Cheville’s expertise is in pathogenesis and cytopathology. He has received many awards and honors, including the American Feed Industry Award for Outstanding Research from the American Veterinary Medical Foundation (2001), the Pfizer Award for research in bovine disease from the American Veterinary Medical Association Foundation (1998), and the Outstanding Achievement Award from the US Department of Agriculture (1991). He has served on the National Research Ccouncil Committee on Ungulate Management in Yellowstone National Park and Study on Brucellosis in the Greater Yellowstone Area.

Peter Daszak is executive director of the Consortium for Conservation Medicine, a collaborative partnership between Harvard Medical School’s Center for Health and the Global Environment, the Johns Hopkins School of Public Health, Tufts University’s School of Veterinary Medicine, the US Geological Survey National Wildlife Health Center, and the Wildlife Trust. He directs the consortium’s programs in research, education, policy, and practical conservation. He earned a BSc in zoology and a PhD in parasitology. His research focuses on the taxonomy, pathology, and conservation impact of parasitic diseases, particularly those of nonmammalian vertebrates and invertebrates. In collaboration with groups in Britain, Australia, and the United States, he discovered a previously unknown fungal disease of amphibians, chytridiomycosis, which is a major cause of frog population declines globally and may be transmitted by bullfrogs. The discovery highlights the link between global trade and disease emergence, a process known as pathogen pollution. Dr. Daszak has adjunct positions at three American and two British universities. He has served on committees of the World Conservation Union and the World Health Organization and has advised an array of government, commercial, and noncommercial organizations. Dr. Daszak has received a number of awards, including the 2000 CSIRO Medal for collaborative work on chytridiomycosis.

W. Jean Dodds is founder and president of Hemopet, the first nonprofit national blood bank program for animals. She received her DVM with honors from the Ontario Veterinary College, University of Toronto. In 1965, she accepted a position with the New York State Health Department in Albany, and she was later promoted to chief of the Laboratory of Hematology at the Wadsworth Center. In 1980, she became executive director of the New York State Council on Human Blood and Transfusion Services. Dr. Dodds has been a grantee of the National Heart, Lung, and Blood Institute and has over 150 research publications. She was formerly president of the Scientist’s Center for Animal Welfare and chairman of the Committee on Veterinary Medical Sciences and vice chair of the Institute of Laboratory Animal Resources. She was also the editor of Advances in Veterinary Science and Comparative Medicine. Her awards include Outstanding Woman Veterinarian of the Year; American Veterinary Medical Association’s Award for Outstanding Service to the Veterinary Profession, American Animal Hospital

Association; Gaines Fido Award as Dogdom’s Woman of the Year; Award of Merit in Recognition of Special Contributions to the Veterinary Profession, American Animal Hospital Association; Centennial Medal of the University of Pennsylvania School of Veterinary Medicine; and Holistic Veterinarian of the Year Award of the American Holistic Veterinary Medical Association. She was elected distinguished practitioner of the National Academy of Practice in Veterinary Medicine. In 1986, she moved to southern California to establish Hemopet, and she is expanding Hemopet’s nonprofit services and educational activities.

a past president and a distinguished member of the American College of Veterinary Pathologists. He was a member of the National Research Council Panel on Animal Health and Veterinary Medicine, which he chaired in 1996-1997.

Darcy H. Shaw is a professor of small-animal internal medicine and chair of the Department of Companion Animals at the Atlantic Veterinary College (AVC) of the University of Prince Edward Island. He received his DVM and MVSc from the University of Saskatchewan, Canada, and his MBA in educational administration from Royal Roads University, Canada. He is a diplomate of the American College of Veterinary Internal Medicine. His research interests include the role of the kidney in acid-base balance, mechanisms of progressive renal failure, and the role of cytokines in renal interstitial inflammation and fibrosis. Dr. Shaw was president of the Canadian Veterinary Medical Association (2000-2001). He has been service chief of small animal medicine and director of the AVC Veterinary Teaching Hospital (1992-1994).

David E. Swayne is laboratory director and supervisory veterinary medical officer at the Southeast Poultry Research Laboratory of the US Department of Agriculture (USDA), Agricultural Research Service. He leads a team of experts in studying exotic and emerging poultry viral diseases, including the H5 subtype of avian influenza virus. He received USDA’s Secretary’s Group Award and the Silver Plow Award for research that advanced the understanding of the pathobiology and epidemiology of Hong Kong H5N1 avian influenza and development of strategies to protect US poultry. He served on the Board of Governors of the American College of Poultry Veterinarians (ACPV) and the Board of Directors of the American Association of Avian Pathologists. Dr. Swayne received his BS in domestic-animal biology from the University of Arkansas, his DVM and MS in veterinary pathology from the University of Missouri, and his PhD in veterinary pathology from the University of Georgia. He is a diplomate of the American College of Veterinary Pathologists and of ACPV.

Ravi J Tolwani is an associate professor and director of postdoctoral training in laboratory animal and comparative medicine in the Department of Comparative Medicine at Stanford University. He received his DVM from Auburn University and PhD in molecular and cellular pathology from the University of Alabama, Birmingham. He is a diplomate of the American College of Laboratory Animal Medicine. Dr. Tolwani maintains an active research program that focuses on understanding the molecular mechanisms of plasticity in the nervous system and developing new therapies for neurodegenerative diseases. He is associate editor of Comparative Medicine and has served on the Board of Directors of the American College of Laboratory Animal Medicine. He received the Young Investigator Award from the American Association for Laboratory Animal Science in 1999 and the Special Emphasis Research Career Award from the National Institutes of Health in 1998. 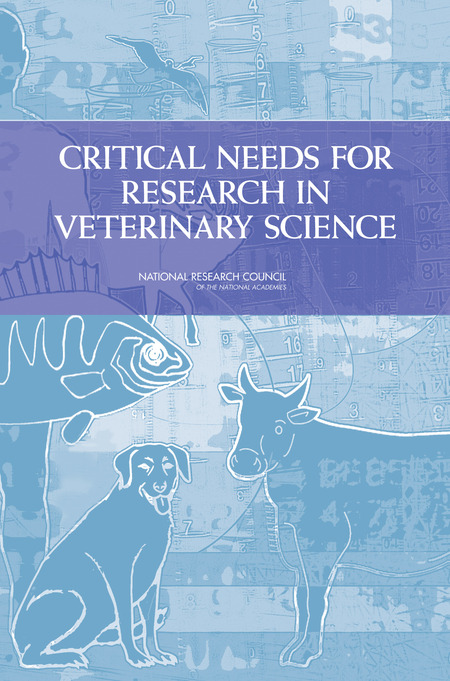 Research in veterinary science is critical for the health and well-being of animals, including humans. Food safety, emerging infectious diseases, the development of new therapies, and the possibility of bioterrorism are examples of issues addressed by veterinary science that have an impact on both human and animal health. However, there is a lack of scientists engaged in veterinary research. Too few veterinarians pursue research careers, and there is a shortage of facilities and funding for conducting research. This report identifies questions and issues that veterinary research can help to address, and discusses the scientific expertise and infrastructure needed to meet the most critical research needs. The report finds that there is an urgent need to provide adequate resources for investigators, training programs, and facilities involved in veterinary research.