Get This Book
Visit NAP.edu/10766 to get more information about this book, to buy it in print, or to download it as a free PDF.
« Previous: Executive Summary
Page 13 Share Cite
Suggested Citation:"1 Introduction." National Research Council. 2005. Autonomous Vehicles in Support of Naval Operations. Washington, DC: The National Academies Press. doi: 10.17226/11379.
×

One of the first topics addressed by the Committee on Autonomous Vehicles in Support of Naval Operations as it began this study was its definition of the term “autonomous vehicles.” To avoid a prolonged debate over how much “intelligence” is required for a vehicle to be considered “autonomous,” the committee elected to include within the scope of this report all relevant vehicles that do not have a human onboard. Moreover, an autonomous vehicle is an unmanned vehicle with some level of autonomy built in—from teleoperations to fully intelligent systems. Unmanned aerial vehicles (UAVs), unmanned surface vehicles (USVs), unmanned undersea vehicles (UUVs), and unmanned ground vehicles (UGVs) have some level of autonomy built in; the committee uses the acronym “AV” to refer to all such autonomous vehicles. While this definition of an AV as an unmanned vehicle with some level of autonomy built in is broad enough to include weapons systems such as torpedoes, mobile mines, and ballistic and cruise missiles, these systems may be mentioned peripherally but are not discussed in this report. Nor are space vehicles, although space-based applications such as enhanced command, control, and communications (C3) are discussed in terms of their enabling autonomous vehicles.

Past Use of Autonomous Vehicles

Autonomous vehicles (AVs) have been used in military operations for more than 60 years, with torpedoes, cruise missiles (e.g., the German V-1 in World War II), satellites, and target drones being early examples. They have also been widely used in the civilian sector (e.g., by first-responders for the disposal of

explosives, by those engaged in work and measurement in radioactive environments, by various offshore industries for both creating and maintaining undersea facilities, by researchers in atmospheric and undersea activities, and by industry in automated and robotic manufacturing).

This report is primarily forward-looking, building on recent AV successes experienced during military operations in Kosovo, Afghanistan, and Iraq. However, it is instructive to look briefly at the history of U.S. military Service use of AVs, some of which is summarized in Table 1.1; the table also contains lessons learned that are believed to have continuing value.

The primary threats to the security of the United States today are nonstate actors and rogue nations, with the potential rise of a serious military competitor in the future. The likelihood of conflict appears to be on the increase, and anticipating the next theater of war is more difficult now than in the recent past. The proliferation of weapons of mass destruction continues to be a fundamental concern. In addition, the importance of stability operations in which U.S. forces are employed as peacekeepers on foreign soil is increasing. Furthermore, while the American people appear to be very supportive of military initiatives, they are also increasingly concerned with limiting losses to U.S. military personnel and reducing collateral damage. As a result, “dull, dangerous, or dirty” tasks (e.g., mine clearance listed in Table 1.1) could continue to be performed by AVs.

The current U.S. defense strategy has as primary elements homeland defense, strategic deterrence, and the capability to conduct simultaneous conventional military operations as well as special operations in the war on terror. The role of the Department of Defense (DOD) in homeland defense is being defined as the Department of Homeland Security establishes itself. In this context, the U.S. Navy is being called upon to increase its collaboration with the U.S. Coast Guard.

The nation’s conventional forces are expected to be able to deter aggression in any four critical regions and to win decisively in one. The often geographically distributed threats and their uncertain nature today stress the size and operational tempo of U.S. forces. It is widely expected that smaller but highly capable and determined adversaries will employ asymmetric means to oppose U.S. forces. In many cases these means could be directed at naval forces—for example, the use of mines or the threat of supersonic, sea-skimming cruise missiles to slow down operations, which can cause failure at the campaign level.

The Trend Toward Joint Operations and Acquisition

TABLE 1.1 Past U.S. Military Use of Autonomous Vehicles (AVs)

quence have been conducted with forces drawn from more than one Service. Increasingly these forces have been integrated. Similarly, major military systems are more frequently being acquired jointly, either through a joint agency (e.g., the Missile Defense Agency) or through a Service selected as executive agent for the procurement of systems for more than one Service.

Department of Defense Vision for Transformation

Beginning with its issuance of Joint Vision 20101 in 1993, the Department of Defense has presented a vision for a future force—distributed and networked; rapidly deployable; with the capability to “observe, plan, and execute” on time lines within the adversary’s decision cycle; and capable of highly effective operations, denoted as precision engagement, providing full-dimensional protection, dominant maneuver, and focused logistics. In 2000, Joint Vision 20202 extended and refined the vision. The 2001 Quadrennial Defense Review Report (QDR)3 identified six operational goals of a transformed force: (1) protect critical bases of operation (including the U.S. homeland); (2) protect and sustain U.S. forces in distant antiaccess or area-denial environments and defeat antiaccess threats; (3) deny sanctuary to enemies through persistent surveillance, tracking, and rapid engagement with high-volume precision strikes; (4) assure information systems in the face of attack and conduct effective and discriminating offensive information operations; (5) enhance the capability and survivability of space systems and supporting infrastructure; and (6) leverage information technology and innovative concepts to develop an interoperable, joint command, control, communications, computers, intelligence, surveillance, and reconnaissance (C4ISR) architecture and capability that includes an adaptable joint operational picture.

The 2001 QDR also defined four pillars of a strategy for force transformation: (1) strengthen joint operations, (2) exploit U.S. intelligence advantages, (3) experiment in support of new warfighting concepts, and (4) develop transformational capabilities. As guidance on the fourth pillar of this strategy, Transformation Planning Guidance,4 released in 2003, offered the following principle: A

transformational capability is one that enables (1) superior information position, (2) high-quality shared awareness, (3) dynamic self-coordination, (4) dispersed forces, (5) de-massed forces, (6) deep sensor reach, (7) compressed operations and levels of war, (8) rapid speed of command, and (9) ability to alter initial conditions at increased rates of change. As addressed in the following chapters, achieving these capabilities poses new challenges to AVs in terms of their availability (relating to endurance, environmental sensitivity, vulnerability, logistics, and reliability), their cooperability, interoperability, and deconfliction with other systems, their flexibility and modularity, and their cost. Advances in AVs are enabled (and limited) by progress in the technologies of computing and robotics, navigation, communications and networking, power sources and propulsion, and materials.

THE PROMISE OF AUTONOMOUS VEHICLES

It is the thesis of this report that autonomous vehicles have the potential to contribute significantly to achieving many of the capabilities cited above from Transformation Planning Guidance, and that AVs thus qualify as providing potentially transformational capabilities.

As the autonomy level of AVs increases, the number and complexity of the missions that they can perform will increase—with the added benefit of their being able to perform missions not previously feasible simply owing to the risk involved or to a lack of available human operators. The potential advantages of fully autonomous vehicles are that they can enable a force that is mission-capable with fewer personnel, capable of more rapid deployment, and easier to integrate into the digital battlefield.

One can define different levels of autonomy that are appropriate for different missions (as discussed in Chapter 3). The level that includes waypoint navigation (en route navigation changes) and manual command of the payload may be adequate for present-day missions, but it does not provide a truly transformational capability.

More complex tasks require more decision-making capability. The Global Hawk intelligence, surveillance, and reconnaissance (ISR) UAV, for example, can choose between imaging and maneuvering when maneuvering would ruin an image. It can also choose an alternate airport when necessary, without operator input if communications are lost. However, these are still programmed choices, and the decision hierarchy must be anticipated at the mission-planning stage, which is more similar to traditional expert-system programming than to the still-developmental neural network, genetic algorithm, or more modern artificial intelligence techniques. Unless it has sustained high-bandwidth communications to a human operator, an unmanned aerial vehicle engaged in combat or in mixed aircraft operations needs a high level of autonomy in order to sense situations and make complex evaluations and action decisions. Likewise, for unmanned ground,

surface, or underwater vehicles, increased autonomy allows more complex missions and provides more value to the user, especially for those systems to which sustained communications are not feasible.

Following the Executive Summary and this brief introduction to the report, which provides the committee’s definition of the term “autonomous vehicles,” Chapter 2 contains a discussion of the naval operational environment and vision for the Navy and Marine Corps and of naval mission needs and potential applications and limitations of AVs. Chapter 3 discusses autonomy technology—including the state of the art of today’s autonomous systems and levels of autonomy. Chapter 4 focuses on the capabilities and potential of unmanned aerial vehicles. Chapter 5 focuses on unmanned surface and undersea vehicles, and Chapter 6 discusses unmanned ground vehicles. Each of these chapters discusses the potential of AVs for naval operations, the operational needs and technology issues, and the opportunities for improved operations. Chapter 7 discusses the integration of autonomy in network-centric operations, including UAV command and control, UAV communications, ISR and UAVs, interoperability issues for AVs, and space-based systems. Chapters 3 through 7 present the committee’s conclusions and recommendations.

Appendix A provides brief biographies of the members of the committee. Appendix B offers a technical discussion of AV scaling, energy, sensing, communications, and related topics. Appendix C provides more details on the UAV system descriptions. Appendix D is a list of acronyms and abbreviations. 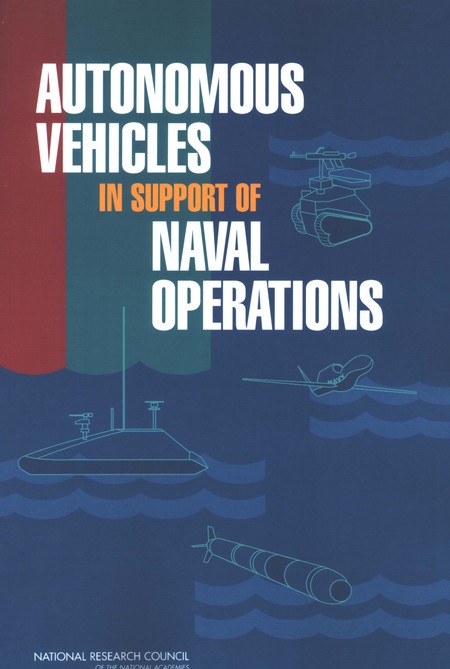 Autonomous vehicles (AVs) have been used in military operations for more than 60 years, with torpedoes, cruise missiles, satellites, and target drones being early examples.1 They have also been widely used in the civilian sector--for example, in the disposal of explosives, for work and measurement in radioactive environments, by various offshore industries for both creating and maintaining undersea facilities, for atmospheric and undersea research, and by industry in automated and robotic manufacturing.

Recent military experiences with AVs have consistently demonstrated their value in a wide range of missions, and anticipated developments of AVs hold promise for increasingly significant roles in future naval operations. Advances in AV capabilities are enabled (and limited) by progress in the technologies of computing and robotics, navigation, communications and networking, power sources and propulsion, and materials.

Autonomous Vehicles in Support of Naval Operations is a forward-looking discussion of the naval operational environment and vision for the Navy and Marine Corps and of naval mission needs and potential applications and limitations of AVs. This report considers the potential of AVs for naval operations, operational needs and technology issues, and opportunities for improved operations.