Globalization of Materials R&D: Time for a National Strategy (2005)

Get This Book
Visit NAP.edu/10766 to get more information about this book, to buy it in print, or to download it as a free PDF.
Page i Share Cite
Suggested Citation:"Front Matter." National Research Council. 2005. Globalization of Materials R&D: Time for a National Strategy. Washington, DC: The National Academies Press. doi: 10.17226/11395.
×

TIME FOR A NATIONAL STRATEGY

Committee on Globalization of Materials Research and Development

This project was supported by the Department of Defense under Award No. MDA972-01-D-0001. Any opinions, findings, conclusions, or recommendations expressed in this publication are those of the author(s) and do not necessarily reflect the views of the sponsors.

COMMITTEE ON GLOBALIZATION OF MATERIALS RESEARCH AND DEVELOPMENT

University of Science and Technology Beijing

The Committee on Globalization of Materials Research and Development was appointed by the National Research Council (NRC) in December 2003 to assess the status and impacts of the globalization of materials science and engineering (MSE) research and development (MSE R&D). The panel was charged to do the following:

The committee met four times during the course of the study to hear detailed presentations on the issues surrounding globalization and globalization’s impact on the current state of MSE R&D, the U.S. economy, and national security. In

addition, numerous private interviews were conducted with individuals and colleagues in academia, the federal research agencies, and industry. The committee also organized a poll of a self-selected sample of members of the materials community. The committee is grateful to several professional societies—the American Ceramic Society, the American Physical Society, the Federation of Materials Societies, the Materials Research Society, The Minerals, Metals and Materials Society, the Society for Biomaterials, and the Society of Manufacturing Engineers—for their assistance and to John Armor, Tia Benson-Tolle, Keith Bowman, James Daley, Duane B. Dimos, Robert Hawsey, Terry Lowe, John E. Marra, Ozden Ochoa, Greg Schoeppner, Robert Shull, and Kathleen Taylor for their valuable suggestions and their critical input to the committee’s report.

Chapter 1 of this report defines MSE and globalization in the broadest sense and examines the history of globalization and R&D in general. Chapter 2 focuses on indicators for the emergence of global research activity in MSE. Chapter 3 updates the NRC report Experiments in International Benchmarking of U.S. Research Fields (2000) in some of the materials subfields. Chapter 4 examines various U.S. regulatory regimes—export, technology transfer, intellectual property, tax policy, immigration, environmental safety and health, and product approval—that might influence corporate R&D globalization decisions. Chapter 5 discusses the economic and national security impacts for the United States of the globalizing trends in MSE R&D. Chapter 6 presents a series of recommendations based on the conclusions drawn in each of the chapters and aimed at defining a strategy for maintaining access to critical, cutting-edge MSE R&D. Because this study was sponsored by the Department of Defense (DOD), the committee focused much of its attention on analyzing and recommending particular actions for DOD and its agencies.

It is clear to the committee that the United States and other leading industrial nations are experiencing the globalization of MSE R&D. While R&D is moving offshore to support manufacturing facilities in central Europe and Asia, a much more important aspect of globalization is the massive and accelerating investments that foreign governments, most notably China and India, are making in their own R&D infrastructures, particularly education. This trend is occurring at a time when such investments in the United States are falling. The enrollment of foreign students in graduate science and engineering education at U.S. universities is dropping rapidly and that of U.S. students is in free fall. The Organisation for Economic Co-operation and Development (OECD) reports that in 2000, the share of students in China graduating with engineering degrees was about 40 percent while for the United States it was about 5 percent. Clearly, the United States has a serious problem in education that must be addressed at the national/ federal level if it is to maintain its leadership in innovation. The solution to this

problem is too important to our future to be left to local decision makers. Like much of U.S. commerce, the U.S. defense and intelligence communities have been successful because they have had access to a one- or two-generation lead in critical technologies.

It is the committee’s hope that the conclusions and recommendations in this report will help prepare the United States to deal effectively with the globalization of MSE R&D, secure the nation from future threats, and ensure continued access to the best domestic or foreign MSE R&D in the world.

Finally, I wish to thank all the committee members for their insights, inputs, and various contributions to this study. I also wish to thank the staff of the National Materials Advisory Board for their assistance in the development and execution of this study and in the production of this report.

Committee on Globalization of Materials Research and Development

Although the reviewers listed above have provided many constructive comments and suggestions, they were not asked to endorse the conclusions or recommendations, nor did they see the final draft of the report before its release. The review of this report was overseen by Elsa Garmire, Dartmouth College. Appointed by the National Research Council, she was responsible for making certain that an independent examination of this report was carried out in accordance with institutional procedures and that all review comments were carefully considered. Responsibility for the final content of this report rests entirely with the authoring committee and the institution.

Next: Executive Summary »
Globalization of Materials R&D: Time for a National Strategy Get This Book
× 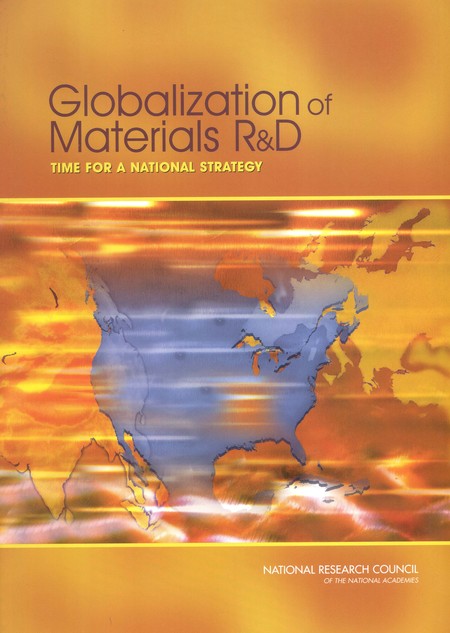 Materials Science and Engineering (MSE) R&D is spreading globally at an accelerating rate. As a result, the relative U.S. position in a number of MSE subfields is in a state of flux. To understand better this trend and its implications for the U.S. economy and national security, the Department of Defense (DOD) asked the NRC to assess the status and impacts of the global spread of MSE R&D. This report presents a discussion of drivers affecting U.S. companies' decisions about location of MSE R&D, an analysis of impacts on the U.S. economy and national security, and recommendations to ensure continued U.S. access to critical MSE R&D.