Priorities in Space Science Enabled by Nuclear Power and Propulsion (2006)

Chapter:Appendix A: Past U.S. Space Nuclear Power and Propulsion Programs

Get This Book
Visit NAP.edu/10766 to get more information about this book, to buy it in print, or to download it as a free PDF.
« Previous: 9 Findings and Recommendations
Page 109 Share Cite
Suggested Citation:"Appendix A: Past U.S. Space Nuclear Power and Propulsion Programs." National Research Council. 2006. Priorities in Space Science Enabled by Nuclear Power and Propulsion. Washington, DC: The National Academies Press. doi: 10.17226/11432.
×

A
Past U.S. Space Nuclear Power and Propulsion Programs

The United States has a long history of developing space nuclear power and propulsion programs. The most common systems have been the various types of radioisotope power systems used for outer planet spacecraft such as Voyager and Cassini (see Table 1.2 for details). However, many other technologies have been studied and occasionally progressed to advanced testing or even launch.

Starting in the mid-1950s, the United States initiated a program to develop nuclear propulsion for spacecraft. The basic technology involved passing hydrogen through a very high temperature nuclear reactor, where it expanded and blasted out of the reactor at high velocity. Eventually NASA and the Atomic Energy Commission jointly ran two main programs, a reactor technology development program named Rover and a program to develop a flight-capable nuclear rocket engine known as NERVA.

Under the Rover program, nuclear reactors were built at the Los Alamos National Laboratory’s Pajarito Site and tested at very low power, and then shipped to the Nevada Test Site for higher-power tests. Laboratory work also included developing and testing the fuel elements that powered the reactors. Phase one of Project Rover was called Kiwi and entailed building and testing eight reactors between 1959 and 1964. Phase two, called Phoebus, involved advanced nuclear reactors.

NERVA began in 1961 and by the mid-1960s progressed to hardware development tests in the Nevada desert. The NERVA engine utilized a hot-bleed cycle in which a small amount of hydrogen gas is diverted from the thrust nozzle to drive the turbine that pumps fuel into the engine. NERVA reached an integrated system component demonstration readiness level. At various points NASA planned on using NERVA as a rocket upper stage, a space ferry for lunar missions, and a propulsion stage for human missions to Mars. However, after Apollo, none of these projects was approved, and NERVA therefore had no dedicated mission. Congress showed greater support for NERVA than did the White House, but the program was eventually canceled by 1972.

The nuclear pulse drive was conceived by H-bomb designers Stanislaw Ulam and Cornelius Everett at Los Alamos in 1955 and sponsored primarily as a study project by the Atomic Energy Commission and then the U.S. Air Force under the name Project Orion.

Orion adapted nuclear explosives for space use: nuclear bombs would be ejected aft of a spacecraft and exploded some distance away. Propellant (water or wax) surrounding the bombs would be transformed into high-energy plasma and bounce off a pusher plate at the rear of the rocket and push it forward. Shock absorbers would reduce the substantial vibration caused by detonating nuclear weapons behind the craft approximately once every second. Although the plasma from the explosion would have a temperature of 80,000 K, the impulse would be brief and only a tiny layer of the ablative pusher plate would sublimate after each explosion. The vehicle would be ground launched from a remote location.

The Orion design theoretically allowed vast payloads to be hurled to the planets. A typical design had a payload of hundreds of tons, meaning no complex environmental recycling systems or lightweight structures or equipment would be needed. The pusher plate was typically about one-third of the weight of the craft. The project was transferred to the Air Force in 1957 and produced small-scale demonstration tests involving conventional explosives detonated under a model suspended from a crane. The 1963 Nuclear Test Ban Treaty banned atmospheric nuclear tests, essentially killing the program. Funding was eliminated entirely in 1965. Even Orion’s designers had acknowledged that it was a difficult project with a limited chance of success.

The Air Force’s Project RAND first proposed using nuclear reactors to power satellites in 1946. At the time there was no other way to provide sufficient power to an orbiting satellite. The Air Force funded low-level study efforts of space nuclear reactors over the next decade, but the eventual development of solar cells made nuclear reactors unnecessary. By the late 1950s the Atomic Energy Commission began the Systems for Nuclear Auxiliary Power (SNAP) program to develop fission reactors and radioisotope power systems for both terrestrial and space use. Radioisotope and reactor programs were given odd- and even-number designations, respectively. In 1965 the Air Force launched the SNAP-10A reactor into orbit. It operated for 43 days, producing 500 W of power until the failure of a voltage regulator caused it to shut down. The SNAP-10A reactor was a small zirconium hydride (ZrH) thermal reactor fueled by uranium-235.

Radioisotope power systems (RPSs) convert heat generated by the natural decay of radioisotope fuel (typically plutonium-238 in the United States) into electricity through thermoelectric coupling. The first two RPS demonstration systems (called SNAP-3) were flown in 1961 and generated 3 W of power. Later ones were flown on several Earth-orbiting spacecraft. RPSs were used on Apollo 12, 14, 15, 16, and 17 to supply power to the Apollo lunar surface experiment packages. They were also used to provide primary power to Viking 1 and 2 (SNAP-19, 85 We total), Pioneer 10 and 11 (SNAP-19, 165 We total), Voyager 1 and 2 (each RPS provided 157 We), Galileo (300 We total, along with 120 lightweight radioisotope heater units), Ulysses (same as Galileo), and Cassini (three RTGs delivering 870 We, along with 117 lightweight radioisotope heater units). Many other systems, including all Mars rovers, have used lightweight radioisotope heater units to maintain appropriate temperatures for system electronics. Table A.1 gives a more complete list. These systems have been successfully deployed.

In 1983, a triagency group (National Aeronautics and Space Administration, Department of Defense, and Department of Energy) began development of a 100-kilowatt-electric-class space nuclear reactor called the SP-100. The SP-100 was designed with a 2-MWt fast reactor unit and thermoelectric system delivering 100 kWe for a 7-year period. This reactor was intended to support a wide variety of deep-space exploration needs, defense applications, and planetary outpost power requirements. Because of high costs, schedule delays, and changing national space mission priorities, the SP-100 program was suspended in the early 1990s and later canceled.

The Timberwind space nuclear thermal propulsion program was initiated by the Strategic Defense Initiative Organization in November 1987. Timberwind was a highly classified program to develop technology for a very high acceleration nuclear-powered rocket to launch missile interceptors into space. The project was transferred to the Air Force in 1991 and terminated in 1992, at which point some of the material was declassified. The Project Timberwind concept was based on a particle-bed reactor using tiny uranium carbide pellets as fuel to heat hydrogen propellant. The exhaust would have been highly radioactive. Preliminary designs had been selected but no prototype components had been tested before the program was canceled. No system was ever launched.

Launching dozens of nuclear reactors into space during the 1970s and 1980s, the Soviet Union had a far more active space nuclear power program than did the United States. Although full details remain inaccessible, the Soviet Union is known to have had several separate space nuclear reactor programs under development in the late 1980s. One of these projects, mistakenly labeled “Topaz-2” in the United States but actually known as “Enisey,” was purchased by the U.S. Ballistic Missile Defense Organization in the early 1990s. (Two Soviet nuclear reactors known as Topaz were flown in orbit in the later 1980s but were an entirely different design.) Six Topaz-2 reactors and supporting equipment were flown from Russia to the United States, where several of the reactors were extensively ground tested by a joint team of U.S., British, French, and Russian engineers. The reactors’ unique design allowed them to be tested without nuclear fuel. Topaz utilized a thermionic design for directly converting heat energy into electricity without using a circulating heat transfer fluid or turbine. Although the test program was considered highly successful and the United States retained several flight-capable reactors, no plans were pursued to actually use the equipment in any flight programs.

Dewar, James A., To the End of the Solar System: The Story of the Nuclear Rocket, University Press of Kentucky, Lexington, Ky., 2003.

Next: Appendix B: The Interstellar Observatory »
Priorities in Space Science Enabled by Nuclear Power and Propulsion Get This Book
× 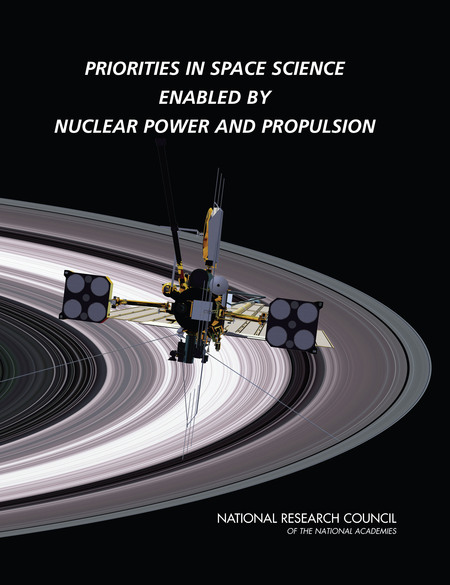 In 2003, NASA began an R&D effort to develop nuclear power and propulsion systems for solar system exploration. This activity, renamed Project Prometheus in 2004, was initiated because of the inherent limitations in photovoltaic and chemical propulsion systems in reaching many solar system objectives. To help determine appropriate missions for a nuclear power and propulsion capability, NASA asked the NRC for an independent assessment of potentially highly meritorious missions that may be enabled if space nuclear systems became operational. This report provides a series of space science objectives and missions that could be so enabled in the period beyond 2015 in the areas of astronomy and astrophysics, solar system exploration, and solar and space physics. It is based on but does not reprioritize the findings of previous NRC decadal surveys in those three areas.