Chapter:Appendix B Committee and Staff Biographies

Get This Book
Visit NAP.edu/10766 to get more information about this book, to buy it in print, or to download it as a free PDF.
« Previous: Appendix A Glossary
Page 139 Share Cite
Suggested Citation:"Appendix B Committee and Staff Biographies." National Research Council. 2006. Asking the Right Questions About Electronic Voting. Washington, DC: The National Academies Press. doi: 10.17226/11449.
×

B
Committee and Staff Biographies

Dick Thornburgh, Co-chair, served as governor of Pennsylvania, attorney general of the United States, and under-secretary-general of the United Nations during a public career that spanned more than 25 years. He is currently counsel to the international law firm of Kirkpatrick & Lockhart Nicholson Graham, LLP, resident in its Washington, D.C. office. Elected governor of Pennsylvania in 1978 and reelected in 1982, Governor Thornburgh was the first Republican ever to serve two successive terms in that office and was named by his fellow governors as one of the nation’s most effective big-state governors in a 1986 Newsweek poll. After his unanimous confirmation by the U.S. Senate, Governor Thornburgh served 3 years as attorney general of the United States (1988-1991) under Presidents Ronald Reagan and George H.W. Bush. He was educated at Yale University, where he obtained an engineering degree, and at the University of Pittsburgh School of Law, where he served as an editor of the Law Review. Governor Thornburgh served as director of the Institute of Politics at Harvard’s John F. Kennedy School of Government (1987-1988). He is a member of the board of directors of the University of Pittsburgh, the Urban Institute, and the Gettysburg National Battlefield Museum Foundation. The governor was the founding chairman of the State Science and Technology Institute and is vice-chairman of the World Committee on Disability. He was selected as a lifetime national associate of the National Academies in 2001 and chaired the National Research Council studies

Harnessing Science and Technology for America’s Economic Growth (1999) and Youth, Pornography, and the Internet (2002).

Richard Celeste, Co-chair, is a native of Cleveland, Ohio. After graduating magna cum laude and Phi Beta Kappa from Yale University in 1959, he attended Oxford University in England as a Rhodes scholar. After a short term as a staff liaison officer in the Peace Corps, Ambassador Celeste worked for 4 years as special assistant to the U.S. ambassador to India in New Delhi. Following this, Ambassador Celeste returned to his native Ohio, where he served as a state representative for 4 years and lieutenant governor for a further 4 years. After an unsuccessful campaign for governor, he was asked by President Carter to serve as director of the Peace Corps. After 2 years, Ambassador Celeste returned to Ohio to wage a successful quest for the governor’s office. Celeste was elected in 1982 and reelected in 1986. Barred by Ohio’s constitution from seeking a third term, Ambassador Celeste became a managing partner in the business consultancy Celeste & Sabety Ltd., in Columbus, Ohio. On November 10, 1997, Richard Celeste was sworn in as the U.S. ambassador to India, a post he held until April 2001. In July 2002, Celeste was inaugurated as the 12th president of Colorado College, a highly selective liberal arts college founded in 1874. Ambassador Celeste serves as chairman of the Health Effects Institute in Boston. He is a member of the Council on Foreign Relations.

R. Michael Alvarez is professor of political science at the California Institute of Technology. He received a B.A. from Carleton College in 1986 and a Ph.D. from Duke University in 1992. At Caltech, his research has focused on elections, voting behavior, and survey and statistical research. Since 2000, much of his work has centered on the Caltech/MIT Voting Technology Project, which he currently codirects. As part of his efforts to study the electoral process, Dr. Alvarez has published a number of studies. He wrote (with Thad E. Hall) Point, Click, and Vote, published in early 2004, his third book. He is now writing another book with Hall on the electronic voting controversy. The recipient of many grants and awards, Dr. Alvarez was named to the Scientific American 50 in 2004 for his efforts in the field of voting technologies and electoral processes.

Thomas Sheridan is Ford professor emeritus of engineering and applied psychology in the Departments of Mechanical Engineering and Aeronautics and Astronautics at Massachusetts Institute of Technology (MIT) and director of the Human-Machine Systems Laboratory there. His research has been on mathematical models of human operator and socioeconomic systems, on man-computer interaction in piloting aircraft and in super-

vising undersea and industrial robotic systems, on computer graphics technology for information searching and group decision making, and on arms control. Dr. Sheridan has an S.M. degree from the University of California, an Sc.D. from MIT, and an honorary doctorate from Delft University of Technology, the Netherlands. He served as president of both the Human Factors and Ergonomics Society and the IEEE Systems, Man and Cybernetics Society and is a fellow of both organizations. Dr. Sheridan chaired the National Research Council’s Committee on Human Factors and has served on numerous other NRC committees. He is senior editor of the journal Presence: Teleoperators and Virtual Environments and is a member of the National Academy of Engineering.

Joseph Smialowski was named Freddie Mac’s executive vice president of Operations and Technology in December 2004. Prior to joining Freddie Mac, Mr. Smialowski was executive vice president at Fleet Boston Financial, where he was part of the firm’s management committee and had direct oversight of information technology, bank operations, corporate real estate, procurement, security and business continuity for Fleet’s business lines in Asia, Europe, Latin America, and the United States. Mr. Smialowski held a key position on the integration team following the acquisition of Fleet Boston by Bank of America. Prior to joining Fleet Boston in 1998, he was chief information officer at Sears, Roebuck and Co., overseeing all of the information technology units for the company’s retail, credit, product service and direct-response businesses in North America. During this time, Mr. Smialowski also served as chairman of the National Retail Federation’s Technology Council and was a recipient of the National Center for Supercomputing’s Grand Challenge Award. He received a B.A. in philosophy from Merrimack College and a master’s degree in computer systems management from the Rochester Institute of Technology.

Anthony Stevens is assistant secretary of state for New Hampshire, a position he has held since 1994. In this role, he has served as the New Hampshire coordinator for the Help America Vote Act, serves as project manager for the statewide voter registration system, and is part of the management team engaged in purchasing voting systems equipped for accessibility. Prior to taking his current position, he was vice president for corporate lending at Citicorp/Citibank and a member of the New Hampshire State Legislature for two terms. He received an M.B.A. from the Harvard Business School and an undergraduate degree in economics, summa cum laude, from the University of New Hampshire. He is a current member of the National Association of State Election Directors.

Peter Weinberger has a Ph.D. in mathematics (number theory) from the University of California at Berkeley. After teaching mathematics at the University of Michigan in Ann Arbor, he moved to Bell Laboratories. At Bell Labs he worked on Unix and did research on topics including operating systems, compilers, network file systems, and security. Dr. Weinberger then moved into research management, ending up as Information Sciences Research vice president, responsible for computer science research, math and statistics, and speech. His organization undertook productive new initiatives, one using all available call detail to detect fraud and another doing applied software engineering research to support building software for the main electronic switching systems for central offices. After Lucent and AT&T split, Dr. Weinberger moved to Renaissance Technologies, a technical trading hedge fund, as head of technology, responsible for computing and security. In 2003 he moved to Google in New York, where he is now.

Herbert S. Lin is senior scientist and senior staff officer at the Computer Science and Telecommunications Board, National Research Council of the National Academies, where he has been study director of major projects on public policy and information technology. These studies include a 1996 study on national cryptography policy (Cryptography’s Role in Securing the Information Society); a 1991 study on the future of computer science (Computing the Future); a 1999 study of Defense Department systems for command, control, communications, computing, and intelligence (Realizing the Potential of C4I: Fundamental Challenges), and a 2000 study on workforce issues in high-technology (Building a Workforce for the Information Economy). Prior to his NRC service, Dr. Lin was a professional staff member and staff scientist for the House Armed Services Committee (1986-1990), where his portfolio included defense policy and arms control issues. He also has significant expertise in math and science education. He received his Ph.D. in physics from MIT in 1979. Avocationally, he is a long time folk and swing dancer, and a poor magician. Apart from his CSTB work, a list of publications in cognitive science, science education, biophysics, and arms control and defense policy is available on request.

Telecommunications and Information Administration, and in the Technology and Public Policy Program at the Center for Strategic and International Studies. Ms. Batch also earned a B.A. from Carnegie Mellon University in literary and cultural studies and Spanish and received two travel grants to conduct independent research in Spain.

Ted Schmitt is a consultant for the Computer Science and Telecommunications Board of the National Academies. Schmitt is currently involved in the CSTB projects providing a comprehensive exploration of cybersecurity and the use of IT to enhance disaster management. Before CSTB, Ted was involved in the development of the digital publishing industry and has taken an active role in various standards groups related to digital rights management. Prior to that, he served as technical director at a number of small technology companies in Germany, Sweden and the United States. He started his career in 1984 as a software engineer for IBM, earning two patents. Ted is currently working on his M.A. in international science and technology policy at George Washington University. His graduate work is supported by a fellowship from the Diplomat and Consular Officers – Retired. He received a B.S. in electrical engineering in 1984 and a B.A. in German in 1997 from Purdue University and studied at the University of Hamburg, Germany.

Next: Appendix C Contributors to the Study »
Asking the Right Questions About Electronic Voting Get This Book
× 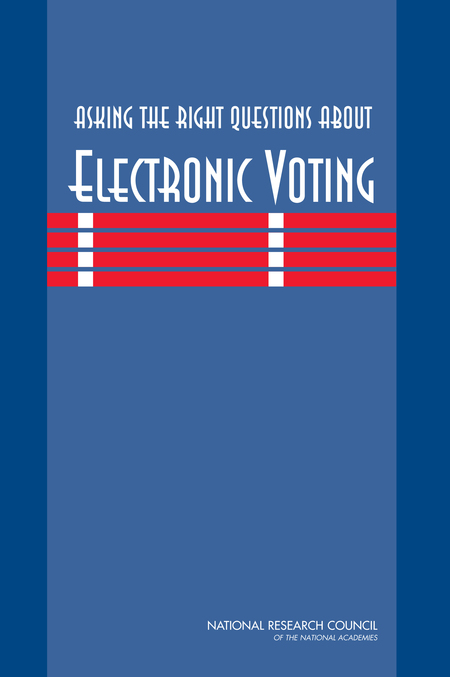