Chapter:Implications of Changes in the Financing of Public Higher Education

Get This Book
Visit NAP.edu/10766 to get more information about this book, to buy it in print, or to download it as a free PDF.
« Previous: Undergraduate, Graduate, and Postgraduate Education in Science, Engineering, and Mathematics
Page 357 Share Cite
Suggested Citation:"Implications of Changes in the Financing of Public Higher Education." National Academy of Sciences, National Academy of Engineering, and Institute of Medicine. 2007. Rising Above the Gathering Storm: Energizing and Employing America for a Brighter Economic Future. Washington, DC: The National Academies Press. doi: 10.17226/11463.
×

Implications of Changes in the Financing of Public Higher Education

Public colleges and universities play a critical role in our nation’s integrated system of education, research, and innovation. They educate the majority of undergraduates and constitute many of the nation’s top research universities. They are training grounds for the people and ideas that drive innovation and improve our lives.

Yet even as public colleges and universities are becoming more important than ever in our knowledge-intensive society, many have come under intense financial pressure. Demographic changes in enrollments are driving up student enrollment in some places and reducing them in others, forcing institutions to adapt to new circumstances. The increasing costs of higher education have led to difficult tradeoffs affecting the quality of the education and services students receive. Extremely tight budgets in some states have reduced the relative appropriations to education in those states even as more students are looking to college as a means of personal advancement.

Though federal funding for student aid is up, more of this funding is going toward loans and tax benefits as opposed to student grants. Also, increases in funding have not been sufficient to match the needs of students.

The result has been a narrowing of educational choices for some students and concerns over deteriorating quality of public institutions.

Some organizations have proposed that the federal government take several important steps to improve the funding of public higher education and to increase student access to these institutions:

THE ROLE OF HIGHER EDUCATION IN THE KNOWLEDGE ECONOMY

Higher education has been central to the strength of the US economy over the last half-century. Broadened access for students has created social and economic opportunities for millions of Americans. The integration of education and research has become a key pillar of our research and innovation system. And the new knowledge generated has provided a strong engine for innovation and economic growth.

Public institutions are a particularly important component of America’s higher education system. They enroll and educate one-quarter of all 4-year undergraduates (see Figure PHE-1). When community colleges are included, public schools account for more than 70% of all undergraduate enrollment (see Figures PHE-2A and B). Many of the nation’s top research institutions, particularly in the Midwest and West, are public universities.

A strong system of higher education is more critical now than ever. Global competition in the knowledge economy is growing. Developed and developing countries are working to create high-quality educational institutions, often using American colleges and universities as a model. They are developing their own pool of knowledge workers and knowledge-sector firms.

For the United States to compete in this environment, American higher education needs to remain preeminent. It must continue to play a central role in the production of knowledge and innovation. It needs to create dynamic environments that will entice knowledge-based companies to locate in this country. The United States should facilitate world leadership of its higher education system by continuing to invest where it counts most. 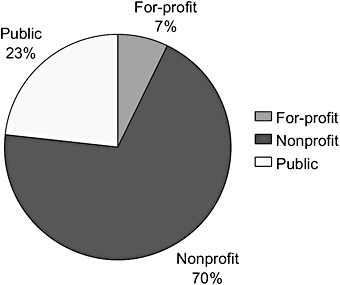 STRESSES IN THE FINANCIAL STRUCTURE OF PUBLIC HIGHER EDUCATION

Public higher education is under severe financial pressures. The first source of pressure is increasing enrollments. The children of the baby boom are now reaching college age and will increase enrollments at some institutions over the coming decade (see Figures PHE-3A, B, and C). At the same time, the value of higher education as a means for students and society to achieve economic, social, and political goals also is boosting enrollments. Because public institutions typically do not charge students for the full cost of their education, the financial demands on these institutions are expected to grow significantly.1 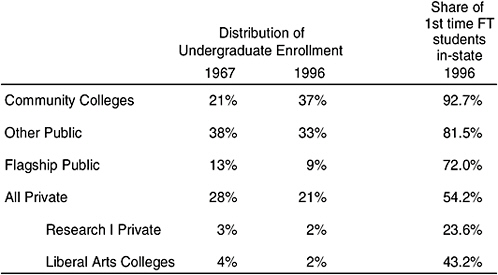 FIGURE PHE-2A Distribution of undergraduate enrollment, by type of college, 1967 and 1996. 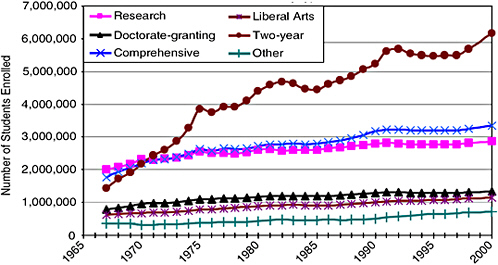 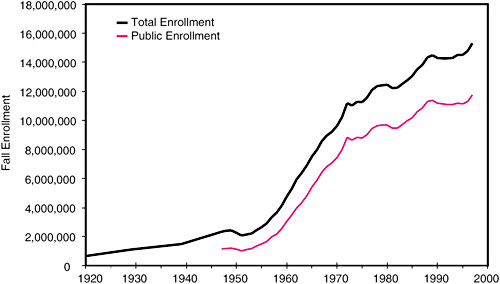 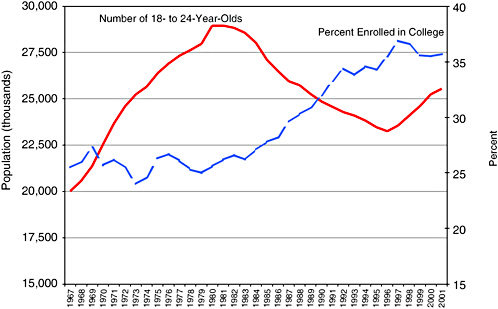 NOTE: Calculations based on US Census Bureau, Population Projections.

A third and perhaps the most important stress on public higher education has been a changing paradigm for public support at both the state and federal levels (see Figures PHE-6A, B, and C). Public colleges and universities—and even private ones that receive state support—have experienced strong competition for state resources over the last decade. Other state financial commitments—such as Medicaid payments—have continued to increase both in real dollars and as a percentage of state budget outlays, which has crowded out other spending priorities4 (see Figure PHE-7). 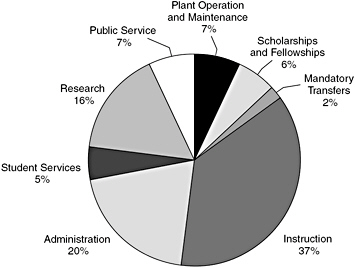 FIGURE PHE-4 Expenditure of all public institutions, by type of expense, 2001. 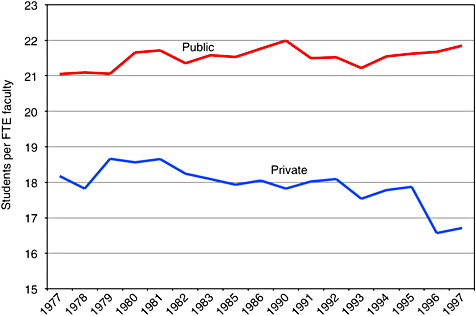 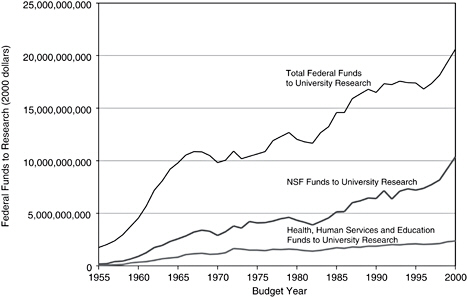 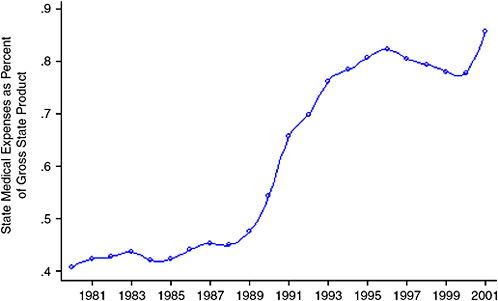 As a consequence of this financial pressure, education funding as a share of state spending, the percentage of education dollars directed to higher education, and the percentage of higher education dollars going to institutions (as opposed to students) all have declined5 (see Figures PHE-8A and B). In brief, state support as a percentage of total revenue for public colleges and universities is down, and these institutions are adapting by restructuring costs and looking elsewhere (for example, to tuition) for financial support (see Figures PHE-9A and B).

At the federal level, spending for higher education appears on the surface to be strong. Spending on the Pell grant program, for example, increased 60% in real terms from 1999-2000 to 2003-20046 (see Figure PHE-10). However, hiding beneath the overall increases in federal support are important shifts in its distribution. The mix of federal support in 2003-2004 was 34% grants, 55% loans, and 5% tax benefits, the latter two of which have been growing as a percentage of federal support (see Figure PHE-11). Thus, there hasbeen a shift away from grants to other modes of support (for example, subsidized loans, tax credits, and tax-sheltered education accounts) and a shift from need-based to merit-based aid (see Figures PHE-12A, B, and C). Together, these changes have tended to shift subsidies away from students from lower-income families and toward the middle and upper-middle classes.

In addition, while there have been real increases in per student funding under the Pell grant program, they have not been adequate to offset larger increases in college prices. The size of the average grant has increased in real terms in recent years, but average tuition, fees, and room and board at public 4-year colleges and universities increased faster. As a result, the average Pell grant in 2003-2004 covered 23% of the charges at a public 4-year institution compared with 35% in 1980-19817 (see Figure PHE-13). Meanwhile, the Leveraging Education Assistance Partnerships (LEAP) program, which provides matching funds to states for providing need-based grant aid, has declined 31% in real terms over the last decade.8

IMPLICATIONS FOR AFFORDABILITY AND QUALITY

These developments have important implications both for access to higher education and for educational quality. As tuition increases, the array 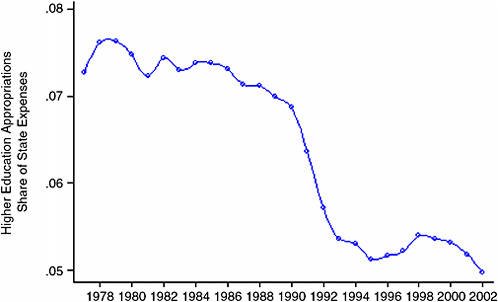 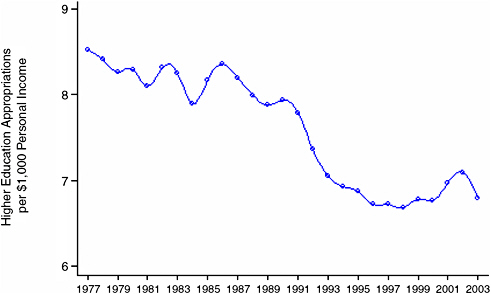 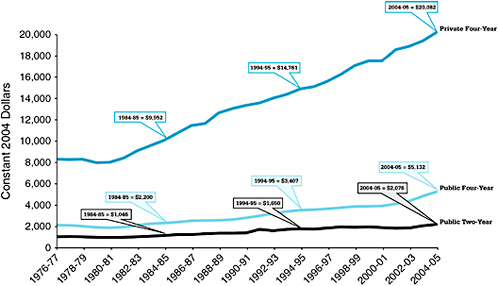 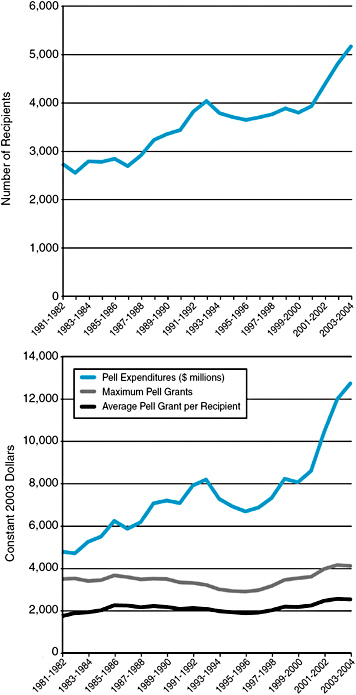 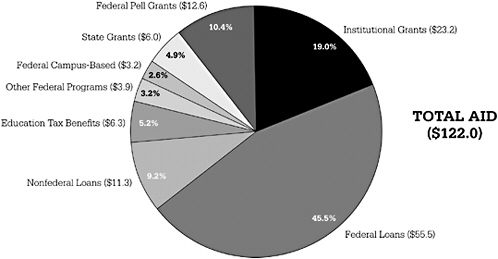 of educational choices for students may be constrained unless the availability of financial aid can compensate. Especially for low-income students, the real and perceived cost increases for college education can limit access and lifetime opportunity (see Figures PHE-14A and B).

The second implication is for the quality of teaching and research. Reductions in funding for public education combined with constraints on tuition increases appear to be causing deterioration in the quality of public colleges and universities compared with private institutions.9 Private universities benefit from larger endowments, have constrained enrollment growth to control costs, and have steadily increased tuition to offset inflation and provide new resources for qualitative improvement. Public institutions are less able to use these measures for fiscal control and as a result are falling behind private colleges and universities, in endowments, faculty salaries, student:faculty ratios, student services, and facilities (see Figure PHE-15). Also, to the extent that changes in faculty composition—such as increases in part-time and nontenure-track staff—affect the quality of teaching and mentoring and the availability of tenure-track faculty as role mod- 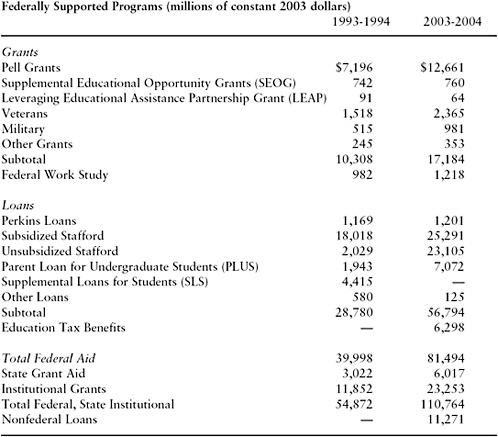 els, they may affect undergraduate persistence, graduation rates, and the propensity to continue to graduate school. The consequences include a more stratified, less dynamic society and a more limited workforce available for generating knowledge and innovation in the economy.

Issues of attainment also have come to the fore. With a growing number of postsecondary students starting out at community colleges and intending to transfer, 2- and 4-year institutions need to work to improve transfer and articulation agreements and processes to facilitate smooth transfers.10 Colleges and universities must make a commitment to the stu- 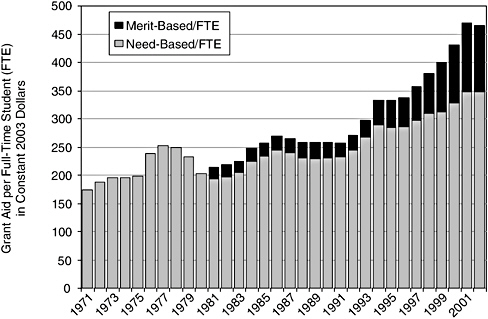 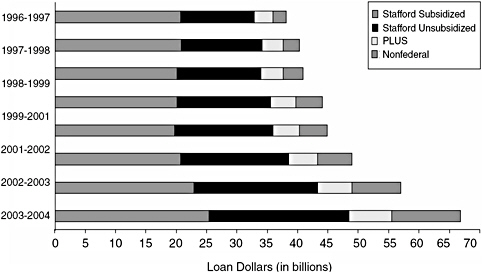 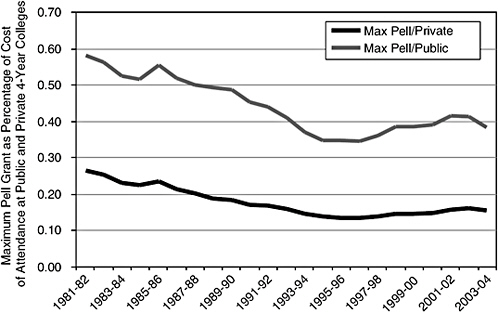 FIGURE PHE-13 Maximum Pell Grant as percentage of cost of attendance at public and private four-year colleges, 1981-82 to 2003-04. 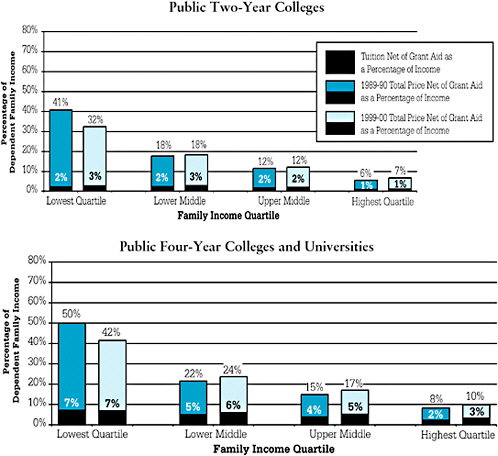 FIGURE PHE-14B Net tuition and fee and net cost of attendance as a percentage of family income, by family income quartile and institution type, 1989-1990 and 1999-2000.

dents they admit by supporting retention efforts so that students do not drop out of college with high debts and no degree.

The federal government has a number of options that could help public institutions receive revenues that reflect the true costs of higher education: 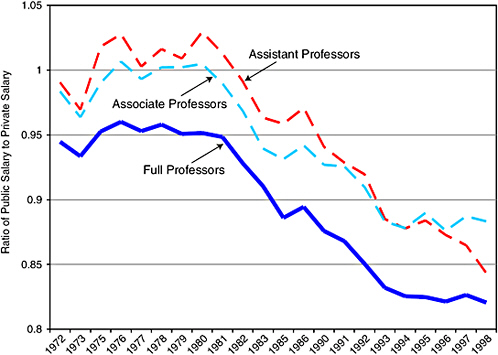 In addition, the federal government can help the states improve access to higher education for all Americans through several actions:

Next: International Students and Researchers in the United States »
Rising Above the Gathering Storm: Energizing and Employing America for a Brighter Economic Future Get This Book
× 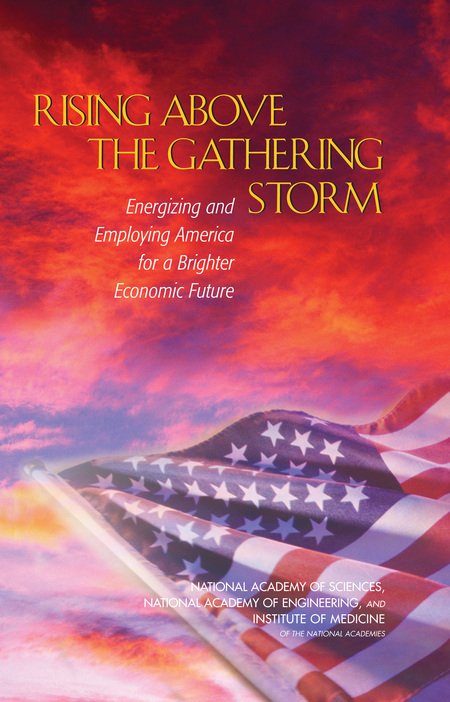