A Risk Reduction Strategy for Human Exploration of Space: A Review of NASA's Bioastronautics Roadmap (2006)

Get This Book
Visit NAP.edu/10766 to get more information about this book, to buy it in print, or to download it as a free PDF.
« Previous: Executive Summary
Page 17 Share Cite
Suggested Citation:"1 Introduction." Institute of Medicine and National Research Council. 2006. A Risk Reduction Strategy for Human Exploration of Space: A Review of NASA's Bioastronautics Roadmap. Washington, DC: The National Academies Press. doi: 10.17226/11467.
×

Extending the spatial and temporal boundaries of human space flight is an important goal for the nation and for the National Aeronautics and Space Administration (NASA). However, human space flight remains an endeavor with substantial risks, and these risks must be identified, managed, and mitigated appropriately to achieve the nation’s goals in space. The Bioastronautics Roadmap (BR) is the result of extensive, commendable efforts on the part of NASA to prioritize research efforts to meet these challenges. It is a broad and complex document that has been developed with care and thought and has evolved over time as the thinking at NASA has progressed regarding its role. During the time this committee was active, the Bioastronautics Critical Path Roadmap of April 2004 (NASA, 2004) evolved into the Bioastronautics Roadmap of February 9, 2005 (NASA, 2005). The former contained 50 risks, 5 cross-cutting areas, and 1,414 “enabling questions” for the three Design Reference Missions: the International Space Station (ISS), the lunar mission, and Mars. The latter contains 45 risks, the same 5 cross-cutting areas, and 1,360 research and technology questions. Other changes occurred as well, as NASA reviewed and revised its own efforts, and in response to the committee’s interim report of 2005 (IOM, 2005). For example, the concepts of “requirements” and “operating bands” were strengthened considerably as the BR evolved. Thus, the committee faced a considerable challenge in responding to its charge to review the BR and its related thought processes because these were dynamic and evolving during most of the review process. How-

ever, the committee recognizes that the ongoing changes represent progress that is both necessary and appropriate, and it acknowledges the continued focus on this approach as a management tool for bioastronautics. The committee’s comments are, therefore, based on the Bioastronautics Roadmap version of February 9, 2005, the current version at the time of this writing (NASA, 2005), referred to as the BR. The February 2005 baseline version of the BR used by the committee for its review is enclosed as a CD in the cover of this report. Both the baseline BR and the interactive version that relates to specific risks and Design Reference Missions are available on-line at http://bioastroroadmap.nasa.gov.

The Bioastronautics Roadmap was developed collaboratively by NASA’s Office of Biological and Physical Research and the Office of Space Flight with the concurrence of the Office of the Chief Health and Medical Officer. NASA describes the document as “the framework used to identify and assess the risks of crew exposure to the hazardous environments of space” (NASA, 2005). According to the baseline BR, the BR also “guides the prioritized research and technology development that, coupled with operational space medicine, will inform” the following:

The BR also provides information that helps establish operating bands—or exposure limits—for humans exposed to risks during space travel and develop countermeasures to maintain the health and functioning of the crew within those limits and technologies to improve the safety and productivity of human space flight. Operating bands represent an acceptable range of performance or functioning, specifically for life support and habitation systems. Exposure limits describe an acceptable maximum decrement or change in a human physiological or behavioral parameter that impacts the performance of assigned tasks or has implications for lifetime medical status.

The BR was created to facilitate and support the successful accomplishment of the three Design Reference Missions described in the President’s space initiative of January 14, 2004 (White House, 2004). The stated goal of the BR is “to reduce risk through effective and efficient mitigation solutions developed from a focused research and technology development strategy” (NASA, 2005). The contents of the BR are the identified

risks; the research and technology questions associated with these risks; and the deliverables—the desired outcomes or solutions to these questions. Major processes of the BR include risk identification and risk assessment. The context in which these risks are identified include the mission requirements for the three Design Reference Missions as well as the organization and systems within NASA and the external organizations and systems that govern NASA (e.g., executive and legislative branches of government, federal budget).

Efforts to understand and manage the risks associated with human space flight have been ongoing at NASA for many years, and specific activities related to the development of a roadmap began in the early 1990s. The process of risk identification that resulted in the BR commenced in 1997 in brainstorming sessions involving NASA and non-NASA experts who rated risks within their own discipline areas. With guidance from NASA and other advisory reports (see Appendix A), 150 risks were identified. More recently, and after several iterations, the list was culled to the 45 risks that are the focus of the current BR. The BR currently identifies 31 human health–related risks and 14 risks related to systems performance and efficiency clustered in 5 cross-cutting areas: human health and countermeasures, radiation health, behavioral health and performance, autonomous medical care, and advanced human life support technologies.

The final risks and related research questions were identified by discipline-specific teams using internal NASA and external advisory committee reports, as well as other recent research findings. The Bioastronautics Science Management Team, which includes NASA scientists, managers, and flight surgeons, and the National Space Biomedical Research Institute (NSBRI) director reviewed and discussed the risks and provided oversight for the project. In the spring of 2004, NASA held several consensus workshops, which included the research community and NASA operations communities (flight surgeons, astronauts, and the medical office), to address the sample size needed for research related to the risks identified, the use of animal models, and the ranking of biomedical risks from the point of view of astronauts and flight surgeons. In addition, NASA sought comments on the BR from the relevant research communities in a web-based query.

Risk assessment and rating are described in the BR for two general types of risk: human health risks and system performance/efficiency risks. The ratings for the human health risks derive from the analysis of the likelihood of occurrence of each risk, the severity of the consequences should a

given event occur, and the status of efforts to mitigate each risk. For the systems risks, the criterion is improved efficiency. Input from the iterative process described above, including results of the workshops, fed into this risk assessment. Table 1-1 shows the risk rating categories and priority definitions used in the BR.

The intent of this risk rating process is to aid communication and decision making by demonstrating the consensus on the relative importance of each risk. The same criteria were applied to all 45 risks in the current BR.

tinued human and robotic space exploration is summarized in Box 1-1. The BR refers to three scenarios in the plan as “Design Reference Missions” and describes them as follows: (1) a one-year mission to the International Space Station (ISS); (2) a one-month stay on the lunar surface; and (3) a 30-month journey to Mars and back.

CHARGE TO THE COMMITTEE

In 2003, NASA asked the Institute of Medicine (IOM), in collaboration with the Division on Engineering and Physical Sciences of the National Academies, to conduct a review of the BR. Specifically, NASA asked the committee to (1) conduct a comprehensive assessment and report of the strengths and weaknesses of the content and processes of the Bioastronautics Roadmap as applied to the missions described in the President’s exploration initiative and (2) identify the unique challenges for accomplishing its goals and objectives. Specific questions for the committee to answer included—but were not limited to—the following:

In September 2004, the committee released its preliminary report to NASA entitled Preliminary Considerations Regarding NASA’s Bioastronautics Critical Path Roadmap (IOM, 2005). That document presented the committee’s preliminary conclusions about the strengths and weaknesses of

Responding to NASA’s request, the committee approached its task with enthusiasm and a strong sense of commitment to the goals of NASA overall and to its most visible images, the astronauts. The efforts of the committee were buoyed by the excitement associated with the President’s exploration initiative of January 2004. The committee included members with a broad range of relevant expertise, and it supplemented that expertise by holding eight meetings in either open session (see Appendix B) or executive session,

where experts from NASA and elsewhere presented their views on relevant content of the BR; by individual meetings between subgroups of the committee, NASA personnel, and outside experts; by more than 60 hours of deliberations in executive session; and by countless hours of independent reading, analysis, and team writing. This report represents the synthesis of these efforts and the collective agreement of committee members.

OVERALL ASSESSMENT OF THE BIOASTRONAUTICS ROADMAP

The committee’s comments focus on areas in which improvement seems necessary and most valuable, but the committee wishes to emphasize that the present document demonstrates that NASA has considered many of the key factors carefully and is handling many aspects of this complex

challenge appropriately. The committee was impressed by the progress that appeared in the BR during the course of its review. The reader should not lose sight of these many positives when reading the following analyses, conclusions, and recommendations, which focus on opportunities for improvement. The current version of the BR is a useful first step, but it will not be adequate to achieve its stated goals unless the recommendations provided here are incorporated into the document and into the thinking and actions of NASA management. The BR must constantly be updated and maintained, the resulting action plans that flow from the BR must be supported by adequate allocation of resources both to NASA and within NASA, and the action plans must be implemented fully. If these criteria are met, the committee believes that the BR will be an effective mechanism to mitigate the risks to human health and thus contribute to ensuring mission success during extended space flight.

The report has been structured according to the committee’s charge insofar as the BR content (Chapter 2) and process (Chapter 3) are concerned. Chapter 4 deals with issues relevant to the BR context and thus addresses what the committee views as the unique challenges faced by NASA in accomplishing the roadmap’s goals and objectives. Specific questions posed in the charge are addressed in the relevant sections of this report. The Summary presents the committee’s finding and recommendations, highlighted throughout the report.

Next: 2 Considerations Regarding the BR Content »
A Risk Reduction Strategy for Human Exploration of Space: A Review of NASA's Bioastronautics Roadmap Get This Book
× 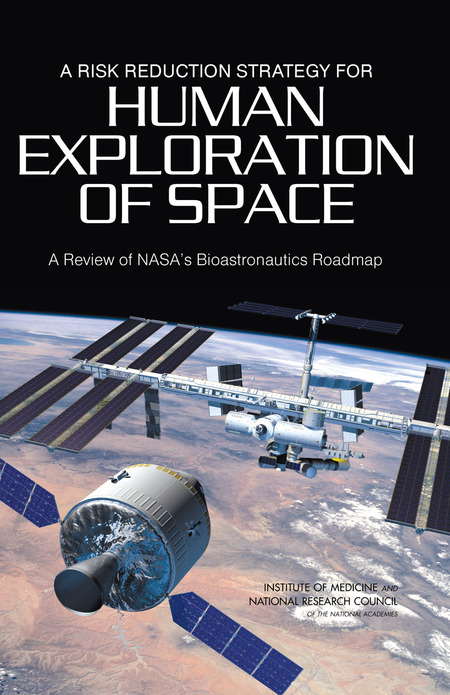 Extending the spatial and temporal boundaries of human space flight is an important goal for the nation and for the National Aeronautics and Space Administration (NASA). However, human space flight remains an endeavor with substantial risks, and these risks must be identified, managed, and mitigated appropriately to achieve the nation's goals in space. The Bioastronautics Roadmap (BR) is the result of extensive, commendable efforts on the part of NASA to prioritize research efforts to meet these challenges.

In 2003, NASA asked the Institute of Medicine (IOM), in collaboration with the Division on Engineering and Physical Sciences of the National Academies, to conduct a review of the BR. Specifically, NASA asked the committee to (1) conduct a comprehensive assessment and report of the strengths and weaknesses of the content and processes of the Bioastronautics Roadmap as applied to the missions described in the President's exploration initiative and (2) identify the unique challenges for accomplishing its goals and objectives.