Chapter:Appendix A Committee and Staff Biographies

Get This Book
Visit NAP.edu/10766 to get more information about this book, to buy it in print, or to download it as a free PDF.
« Previous: References
Page 185 Share Cite
Suggested Citation:"Appendix A Committee and Staff Biographies." National Research Council. 2006. Drawing Louisiana's New Map: Addressing Land Loss in Coastal Louisiana. Washington, DC: The National Academies Press. doi: 10.17226/11476.
×

Appendix A
Committee and Staff Biographies

Robert Dean (chair) is a professor of civil and coastal engineering at the University of Florida. Dr. Dean earned a Sc.D. in 1959 from Massachusetts Institute of Technology. His research focuses on clarifying wave theories, beach erosion, and coastal processes by combining field measurements with relevant analytical procedures. Dr. Dean is a member of the National Academy of Engineering.

Stephen Farber is a professor of economics at the University of Pittsburgh and director of the Environmental Decision Support Program and the Public and Urban Affairs Program. Dr. Farber earned a Ph.D. in economics in 1973 from Vanderbilt University. His research focuses on the economics of ecosystems, particularly the economic valuation of ecosystems and their services.

Reinhard E. Flick is an oceanographer at the California Department of Boating and Waterways and a research associate at the Scripps Institution

of Oceanography’s Center for Coastal Studies. Dr. Flick earned a Ph.D. in 1978 in oceanography from Scripps Institution of Oceanography. His research focuses on shoreline erosion assessment, environmental impacts of engineering works, inlet hydrology, and tidal processes.

Margot Garcia was an associate professor in the Department of Urban Studies and Planning at Virginia Commonwealth University, from which she retired in June 2003. Dr. Garcia earned a Ph.D. in watershed management in 1980 from the University of Arizona. Her research focuses on environmental planning, especially a watershed approach to water quality, bicycle planning and safety, citizen participation, and waste management.

Peter Goodwin is the DeVlieg Presidential Professor in Ecohydraulics at the University of Idaho. Dr. Goodwin earned a Ph.D. in hydraulic engineering in 1986 from the University of California, Berkeley. His research focuses on modeling physical processes in natural aquatic systems.

Joseph Kelley is a professor of marine science in the Department of Geological Sciences and School of Marine Sciences at the University of Maine. Dr. Kelley earned a Ph.D. in geology in 1980 from Lehigh University. His research focuses on measuring sea level change and the response of shorelines to that change.

Lisa Levin is a professor of integrative oceanography at Scripps Institution of Oceanography. Dr. Levin earned a Ph.D. in biological oceanography from Scripps Institution of Oceanography. Her research focuses on population and community ecology of soft-sediment habitats, wetlands ecology and restoration, larval dispersal and the influence on life histories on population dynamics, ecology of deep-sea reducing environments, ecosystem-level consequences of species invasion, and animal-sediment-plant-geochemical interactions.

Scott Nixon is a professor of oceanography at the University of Rhode Island. Dr. Nixon earned a Ph.D. in botany in 1970 from the University of North Carolina. His research focuses on productivity and biogeochemical cycling of coastal ecosystems with an emphasis on estuaries, lagoons,

and wetlands. Dr. Nixon is a previous member of the Ocean Studies Board.

L. Donelson Wright is the Chancellor Professor of Marine Science in the Virginia Institute of Marine Science at the College of William and Mary. Dr. Wright earned a Ph.D. from Louisiana State University. His research focuses on coastal and shoreface morphodynamics and benthic boundary layer processes and variability, nearshore and estuarine oceanography, waves, sediment transport processes, river-mouth deltaic and estuarine processes, and river effluent dynamics.

Dan Walker (study director) earned a Ph.D. in geology in 1990 from the University of Tennessee. A scholar at the Ocean Studies Board, Dr. Walker also holds a joint appointment as a Guest Investigator at the Marine Policy Center of the Woods Hole Oceanographic Institution. Since joining the Ocean Studies Board in 1995, he has directed a number of studies including Oil Spill Dispersants: Efficacy and Effects (2005), Future Needs in Deep Submergence Science: Occupied and Unoccupied Vehicles in Basic Ocean Research (2004), Environmental Information for Naval Warfare (2003), Oil in the Sea III: Inputs, Fates and Effects (2002), Spills of Emulsified Fuels: Risks and Response (2002), Clean Coastal Waters: Understanding and Reducing the Effects of Nutrient Pollution (2000), Science for Decisionmaking: Coastal and Marine Geology at the U.S. Geological Survey (1999), Global Ocean Sciences: Toward an Integrated Approach (1998), and The Global Ocean Observing System: Users, Benefits, and Priorities (1997). A member of the American Geophysical Union, the Geological Society of America, and the Oceanography Society, Dr. Walker was recently named Editor of the Marine Technology Society Journal. A former member of both the Kentucky and North Carolina State geologic surveys, his interests focus on the value of environmental information for policy making at local, state, and national levels.

Jodi Bostrom is a research associate with the Ocean Studies Board. She earned a B.S. in zoology in 1998 from the University of Wisconsin-Madi-

son. Since starting with the Ocean Studies Board in May 1999, Ms. Bostrom has worked on several studies pertaining to fisheries, marine mammals, nutrient overenrichment, and ocean exploration. She will earn an M.S. in environmental science from American University in December 2006.

Next: Appendix B Acronyms and Abbreviations »
Drawing Louisiana's New Map: Addressing Land Loss in Coastal Louisiana Get This Book
× 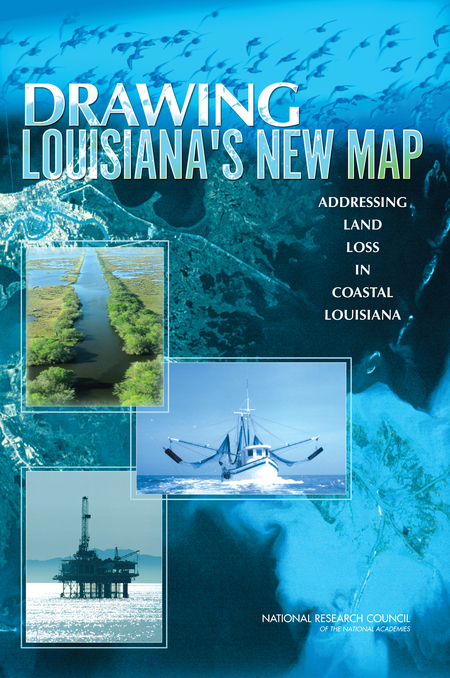 During the past 50 years, coastal Louisiana has suffered catastrophic land loss due to both natural and human causes. This loss has increased storm vulnerability and amplified risks to lives, property, and economies--a fact underscored by Hurricanes Katrina and Rita. Drawing Louisiana's New Map reviews a restoration plan proposed by the U.S. Army Corps of Engineers and the State of Louisiana, finding that, although the individual projects in the study are scientifically sound, there should be more and larger scale projects that provide a comprehensive approach to addressing land loss over such a large area. More importantly, the study should be guided by a detailed map of the expected future landscape of coastal Louisiana that is developed from agreed upon goals for the region and the nation.