Chapter:Appendix B Analysis of Waivers for Disqualifying Conditions

Get This Book
Visit NAP.edu/10766 to get more information about this book, to buy it in print, or to download it as a free PDF.
« Previous: Appendix A Medical Standards for Appointment, Enlistment, or Induction in the Armed Forces
Page 215 Share Cite
Suggested Citation:"Appendix B Analysis of Waivers for Disqualifying Conditions." National Research Council. 2006. Assessing Fitness for Military Enlistment: Physical, Medical, and Mental Health Standards. Washington, DC: The National Academies Press. doi: 10.17226/11511.
×

Appendix B
Analysis of Waivers for Disqualifying Conditions

TABLE B-1 Active Accessions and Cumulative Attrition Rates by Waiver Type, All Services

TABLE B-3 Medical Failures and Waivers, May 1, 2003 to April 30, 2005, Active Forces (most frequent medical failures, ranked by frequency; excludes cases with 2+ failures)

TABLE B-4 Medical Failures and Waivers By Gender, Race, and Service

Next: Appendix C Sponsors and Contributors »
Assessing Fitness for Military Enlistment: Physical, Medical, and Mental Health Standards Get This Book
× 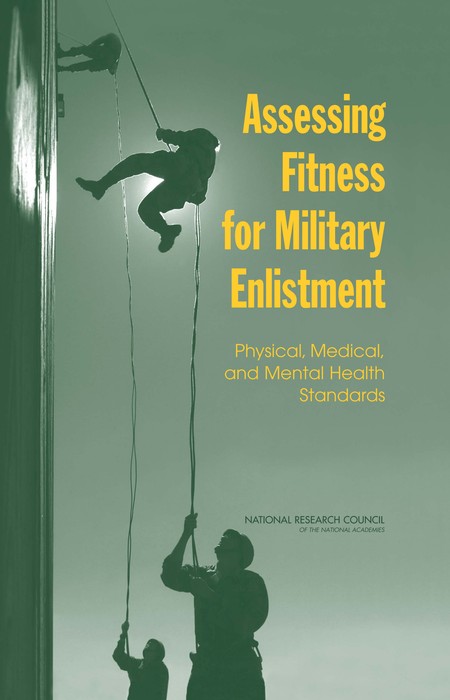 The U.S. Department of Defense (DoD) faces short-term and long-term challenges in selecting and recruiting an enlisted force to meet personnel requirements associated with diverse and changing missions. The DoD has established standards for aptitudes/abilities, medical conditions, and physical fitness to be used in selecting recruits who are most likely to succeed in their jobs and complete the first term of service (generally 36 months). In 1999, the Committee on the Youth Population and Military Recruitment was established by the National Research Council (NRC) in response to a request from the DoD. One focus of the committee's work was to examine trends in the youth population relative to the needs of the military and the standards used to screen applicants to meet these needs.

When the committee began its work in 1999, the Army, the Navy, and the Air Force had recently experienced recruiting shortfalls. By the early 2000s, all the Services were meeting their goals; however, in the first half of calendar year 2005, both the Army and the Marine Corps experienced recruiting difficulties and, in some months, shortfalls. When recruiting goals are not being met, scientific guidance is needed to inform policy decisions regarding the advisability of lowering standards and the impact of any change on training time and cost, job performance, attrition, and the health of the force.

Assessing Fitness for Military Enlistment examines the current physical, medical, and mental health standards for military enlistment in light of (1) trends in the physical condition of the youth population; (2) medical advances for treating certain conditions, as well as knowledge of the typical course of chronic conditions as young people reach adulthood; (3) the role of basic training in physical conditioning; (4) the physical demands and working conditions of various jobs in today's military services; and (5) the measures that are used by the Services to characterize an individual's physical condition. The focus is on the enlistment of 18- to 24-year-olds and their first term of service.