Assessing and Managing the Ecological Impacts of Paved Roads (2005)

Get This Book
Visit NAP.edu/10766 to get more information about this book, to buy it in print, or to download it as a free PDF.
« Previous: References
Page 249 Share Cite
Suggested Citation:"Appendix A: Biographical Information on Committee Members." Transportation Research Board and National Research Council. 2005. Assessing and Managing the Ecological Impacts of Paved Roads. Washington, DC: The National Academies Press. doi: 10.17226/11535.
×

Lance Gunderson (Chair) is an associate professor at Emory University. He earned a B.S. and M.S. in botany and a Ph.D. in environmental engineering sciences from the University of Florida. His research interests include how ecosystem processes and structures interact across space and time and how scientific understanding influences resource policy and management. Dr. Gunderson worked for over a decade as a botanist with the U.S. National Park Service in the Big Cypress and Everglades regions of southern Florida. He then worked for a decade as a research scientist in the Department of Zoology at the University of Florida. He has been chairman of the Department of Environmental Studies at Emory University since January 1999. From 1997 to 2000, he served as the executive director of the Resilience Network, a program of the Beijer International Institute for Ecological Economics, Swedish Royal Academy of Sciences, Stockholm. He is currently vice-chair of the Resilience Alliance, and co-editor in chief of Conservation Ecology.

Anthony Clevenger is a research scientist at the Western Transportation Institute at Montana State University. He earned a B.S. in the conservation of natural resources from the University of California, Berkeley (1980), M.S. in wildlife ecology from the University of Tennessee (1986), and Ph.D. in vertebrate zoology from the Universidad de León, Spain (1990). He has been studying road effects on wildlife populations in Banff and the surrounding national and provincial parks in the Canadian Rocky Mountains since 1996. Dr. Clevenger’s research is focused on long-term monitoring of wildlife crossings to assess their conservation value on animal populations and their performance at maintaining regional landscape connectivity. He has worked as a research wildlife

Virginia Dale is corporate fellow at Oak Ridge National Laboratory. She earned her B.A. in mathematics from the University of Tennessee (1974), M.S. in mathematics with a minor in ecology from the University of Tennessee, Knoxville (1975), and Ph.D. in mathematical ecology from the University of Washington (1980). Dr. Dale’s primary research interests include environmental decision making, forest succession, land-use change, landscape ecology, and ecological modeling. She has worked on developing tools for integrating socioeconomic and ecological models of land-use change. She is editor-in-chief of the journal Environmental Management. She has published over 140 scientific articles and edited six books. She served on the National Academy of Sciences Ecosystem Panel, which produced the report Global Change Ecosystems Research and on the editorial boards of three journals. Dr. Dale was also a member of the “Committee of Scientists” appointed by Secretary of Agriculture and the Ecosystems Panel of the National Science Foundation.

Leonard Evans is president of the Science Serving Society. He earned his D.Phil. in physics from Oxford University. His primary research interest is traffic safety. He is author of “Traffic Safety” (2004) and “Traffic Safety and the Driver” (1991), and 150 journal articles. He has pre-

sented the keynote address at a dozen international traffic safety meetings and has received awards from the International Traffic Medicine Association, the Association for the Advancement of Automotive Medicine, the Human Factors and Ergonomics Society, and National Highway Traffic Safety for his contributions to traffic safety research. He is a member of the National Academy of Engineering.

Gary Evink (retired) earned a B.S. in wildlife ecology (1972) and M.S. in aquatic ecology from the University of Florida (1976). He worked for over 31 years as the state ecologist for the Florida Department of Transportation. Mr. Evink managed environmental services in the Environmental Management Office and was involved in all aspects of policy, procedure, training, research, and quality assurance. He has published hundreds of papers on diverse ecological topics and has experience in every area of environmental documentation in the state and federal processes. Mr. Evink developed and carried out the Florida Department of Transportation’s Ecosystem Management Program, which was a multidisciplinary approach to a systems-level consideration of environmental issues related to transportation. He chaired the annual International Conference on Wildlife Ecology and Transportation. Mr. Evink participated in five National Cooperative Highway Research Program (NCHRP) panels dealing with wetlands, stormwater, and other ecological issues and chaired two of these panels. He is chairing NCHRP 25-09, which is dealing with the impacts of stormwater from construction and repair materials. Mr. Evink is also a consultant for NCHRP Project 20-5, Synthesis Topic 32-11: “Interactions between wildlife ecology and roadways.” He served on the Governor's Commission for a Sustainable South Florida, the South Florida Ecosystem Restoration Task Force, and the State Committee for Environmental Education (chair). He received the 2001 FHWA Environmental Excellence Award for individual leadership.

Kingsley Haynes is university professor and dean of the School of Public Policy at George Mason University. He earned a B.A. in history, geography, and political science from Western Michigan University, M.A. in geography from Rutgers University, and Ph.D. in geography and environmental engineering from the Johns Hopkins University. His areas of expertise include resource and environmental management, urban and regional economic development, economic geography, regional science, social systems modeling, policy analysis and governmental affairs. He has served as professor and director of the Regional Economic Development Institute, School of Public and Environmental Affairs at Indiana University, professor of public affairs and geography at the LBJ School of the University of Texas at Austin, and chair of the Department of Geography at Boston University. Dr. Haynes has been involved in regional economic development, natural resource management, transportation and environmental planning in Montana’s Yellowstone Basin, in the Lake Michigan and Ohio River regions of Indiana, in the Texas coastal zone and internationally in Brazil, Malaysia, Taiwan, and the Middle East. Using mathematical programming techniques for evaluating resource utilization and economic simulation for community water supply alternatives, he has been active in state resource assessment in Texas, Indiana, and Massachusetts. He also directed the Ford Foundation's Office of Resources and Environment.

Wayne W. Kober is president of Wayne W. Kober, Inc. He earned a B.S. in environmental resource management from Pennsylvania State University (1973). He has over 30 years of multimodal transportation and environmental management experience for the public and private sectors. He is nationally recognized as an innovative leader in the field of transportation project development and environmental management. His broad span of experience at successfully integrating environmental analysis, agency and public involvement, and context-sensitive design aspects into a systematic decision-making process has enabled him to play a prominent role in advancing multimodal transportation improvement programs across the country. He led the development of the environmental streamlining and stewardship legislation, policies and practices at the mid-Atlantic state and national levels. From an ecological perspective, he was instrumental in the development and deployment of the Pennsylvania modified habitat evaluation procedure (PAMHEP) used to assess highway wildlife habitat impacts for over an 18-year period on every major transportation project in Pennsylvania, as well as the devel-

opment and implementation of the Pennsylvania Department of Transportation’s wetland and upland mitigation policies and programs. He contributed to the book Road Ecology—Science and Solutions. He is in private practice and currently serves as a senior transportation and environmental management technical expert for the American Association of State Highway and Transportation Officials.

Stephen Lester is vice president of Urban Engineers, Inc. He earned a Bachelors of Civil Engineering (1965) and Masters of Civil Engineering (1969) from Villanova University. Mr. Lester brought 30 years of experience to the position of vice president of engineering and quality services for Urban Engineers, Inc. when he retired from the position of district engineer for the Pennsylvania Department of Transportation (PennDOT). As district engineer, he oversaw the highway and bridge designs, construction and maintenance programs for PennDOT’s most populous district. He supervised over 1,000 employees within a five-county area, which included more than 3,900 miles of state highways and 2,600 state-owned bridges. Mr. Lester had previously served as assistant district engineer for maintenance, district traffic engineer, and assistant district locations engineer.

Kent Redford is vice president of the Wildlife Conservation Society. He earned a Ph.D. in biology from Harvard University (1987). His research interests range from mammalian biology to traditional peoples and biodiversity conservation. His earlier work concentrated on South American mammals with emphasis on anteaters and armadillos and zoogeographic patterns. He is also interested in the study of subsistence hunting and the impacts it has on the conservation of game species in particular and on biodiversity in general. Dr. Redford's work has been expanded to include the role of parks in protecting biodiversity and the relationships between traditional peoples, resource harvesting, and biodiversity conservation.

Margaret Strand is an attorney with Venable, LLP. She earned a B.A. in history from the University of Rochester, M.A. in history from the University of Rhode Island, and J.D. from Marshall Wythe School of Law at the College of William and Mary. Her areas of expertise include environmental policy and wetlands regulation and enforcement. She advises clients on environmental compliance and conducts environmental litigation, focusing on EPA-administered regulatory programs. Before entering private practice, Ms. Strand was chief of the Environmental De-

fense Section of the U.S. Department of Justice, where she was involved in environmental policy issues, including wetlands regulation and enforcement. Ms. Strand is chair of the Wetlands and Water Quality Committee of the American Bar Association Section of Environment, Energy and Resources Law.

Paul Wagner is biology program manager at the Washington Department of Transportation. He earned a B.S. from Juniata College (1986). He has served on a number of review panels, including a National Cooperative Highway Research Program synthesis study of ecology and transportation issues. Mr. Wagner participated in a technical oversight committee that developed a set of ecological models and methodologies for wetland functions assessment for Washington based on the hydrogeomorphic method concepts.

J.M. Yowell (retired) was state highway engineer at the Kentucky Transportation Cabinet. He earned a B.S. in civil engineering from the University of Kentucky (1959). Mr. Yowell has 45 years of experience in the transportation industry and has held such positions as project manager for an engineering and construction firm and vice-president for multimillion dollar construction firms. He has served on a number of advisory boards including the Advisory Board of Kentucky Transportation Center at the University of Kentucky, Industry Advisory Board of Civil Engineering Department.

Next: Appendix B: Spatial Scale of Road Effects on Ecological Conditions: Annotated Bibliography »
Assessing and Managing the Ecological Impacts of Paved Roads Get This Book
× 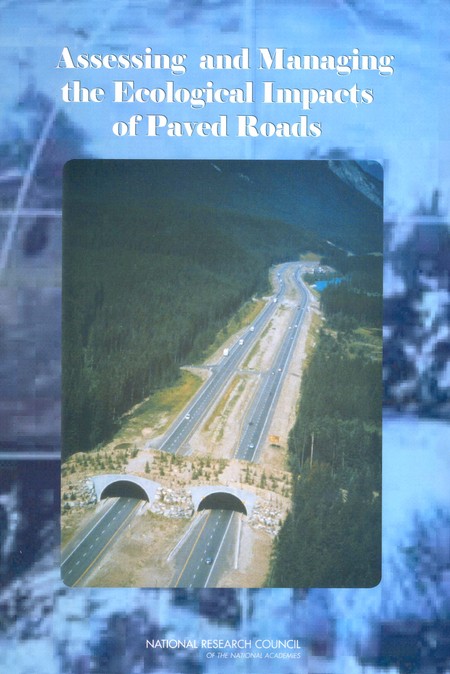 All phases of road development—from construction and use by vehicles to maintenance—affect physical and chemical soil conditions, water flow, and air and water quality, as well as plants and animals. Roads and traffic can alter wildlife habitat, cause vehicle-related mortality, impede animal migration, and disperse nonnative pest species of plants and animals. Integrating environmental considerations into all phases of transportation is an important, evolving process. The increasing awareness of environmental issues has made road development more complex and controversial. Over the past two decades, the Federal Highway Administration and state transportation agencies have increasingly recognized the importance of the effects of transportation on the natural environment. This report provides guidance on ways to reconcile the different goals of road development and environmental conservation. It identifies the ecological effects of roads that can be evaluated in the planning, design, construction, and maintenance of roads and offers several recommendations to help better understand and manage ecological impacts of paved roads.