The Fuel Tax and Alternatives for Transportation Funding: Special Report 285 (2006)

Get This Book
Visit NAP.edu/10766 to get more information about this book, to buy it in print, or to download it as a free PDF.
Page i Share
Suggested Citation:"Front Matter." Transportation Research Board. 2006. The Fuel Tax and Alternatives for Transportation Funding: Special Report 285. Washington, DC: The National Academies Press. doi: 10.17226/11568.
×

The Fuel Tax
AND ALTERNATIVES FOR TRANSPORTATION FUNDING

TRANSPORTATION RESEARCH BOARD OF THE NATIONAL ACADEMIES

This study was sponsored by the National Cooperative Highway Research Program, the Federal Highway Administration of the U.S. Department of Transportation, and the Transportation Research Board.

National Research Council (U.S.). Committee for the Study of the Long-Term Viability of Fuel Taxes for Transportation Finance.

The fuel tax and alternatives for transportation funding / Committee for the Study of the Long-Term Viability of Fuel Taxes for Transportation Finance, Transportation Research Board of the National Academies.

The National Academy of Sciencesis a private, nonprofit, self-perpetuating society of distinguished scholars engaged in scientific and engineering research, dedicated to the furtherance of science and technology and to their use for the general welfare. On the authority of the charter granted to it by the Congress in 1863, the Academy has a mandate that requires it to advise the federal government on scientific and technical matters. Dr. Ralph J. Cicerone is president of the National Academy of Sciences.

The Institute of Medicinewas established in 1970 by the National Academy of Sciences to secure the services of eminent members of appropriate professions in the examination of policy matters pertaining to the health of the public. The Institute acts under the responsibility given to the National Academy of Sciences by its congressional charter to be an adviser to the federal government and, on its own initiative, to identify issues of medical care, research, and education. Dr. Harvey V. Fineberg is president of the Institute of Medicine.

The Transportation Research Boardis a division of the National Research Council, which serves the National Academy of Sciences and the National Academy of Engineering. The Board’s mission is to promote innovation and progress in transportation through research. In an objective and interdisciplinary setting, the Board facilitates the sharing of information on transportation practice and policy by researchers and practitioners; stimulates research and offers research management services that promote technical excellence; provides expert advice on transportation policy and programs; and disseminates research results broadly and encourages their implementation. The Board’s varied activities annually engage more than 5,000 engineers, scientists, and other transportation researchers and practitioners from the public and private sectors and academia, all of whom contribute their expertise in the public interest. The program is supported by state transportation departments, federal agencies including the component administrations of the U.S. Department of Transportation, and other organizations and individuals interested in the development of transportation. www.TRB.org

The Transportation Research Board (TRB) formed the Committee for the Study of the Long-Term Viability of Fuel Taxes for Transportation Finance to respond to concerns that present funding arrangements, especially fuel taxes, may become less reliable revenue sources for transportation programs in the future. At the same time, transportation agencies are interested in developments in toll collection technology and in public–private road projects that suggest opportunities to try fundamentally new approaches to paying for transportation facilities. The goals of the study were to assess what recent trends imply for the future of traditional transportation finance, identify finance alternatives and the criteria by which they should be evaluated, and suggest ways in which barriers to acceptance of new approaches might be overcome. The study was sponsored by the state transportation departments through the National Cooperative Highway Research Program, the Federal Highway Administration, and TRB.

The committee’s conclusions address the viability of present revenue sources, the merits of present transportation finance arrangements, and the potential value of various reform options. The recommendations propose immediate changes to strengthen the existing highway and transit finance system and actions to prepare the way for more fundamental reform in the long term. Because the impetus for the study was concern for the continued reliability of the revenues derived from the special fees and taxes paid by highway users, most of this report is devoted to questions about future tax revenue, alternative forms of highway user charges, how these charges affect highway system performance, and related aspects of highway finance. Problems relating to finance of public transit were not considered as comprehensively. An important feature of present transportation finance arrangements is the dedication of portions of highway user revenues to transit. The committee considered transit funding primarily insofar as it is linked in this way to highway user fee revenue.

Although the reviewers listed above provided many constructive comments and suggestions, they were not asked to endorse the committee’s conclusions or recommendations, nor did they see the final draft of the report before its release. The review of this report was overseen by John S. Chipman, University of Minnesota, and C. Michael Walton, University of Texas at Austin. Appointed by NRC, they were responsible for making certain that an independent examination of the report was carried out in accordance with institutional procedures and that all review comments were carefully considered. Responsibility for the final content of this report rests entirely with the authoring committee and the institution.

Joseph R. Morris managed the study and drafted the final report under the guidance of the committee and the supervision of Stephen R. Godwin, Director of Studies and Information Services. Suzanne Schneider, Associate Executive Director of TRB, managed the report review process. Special appreciation is expressed to Norman Solomon, who edited the report; Jennifer Weeks, who prepared the prepublication copy; and Juanita Green, who managed the book design and production, all under the supervision of Javy Awan, Director of Publications. Frances Holland assisted with meeting arrangements and communications with committee members.

Next: Summary »
The Fuel Tax and Alternatives for Transportation Funding: Special Report 285 Get This Book
× 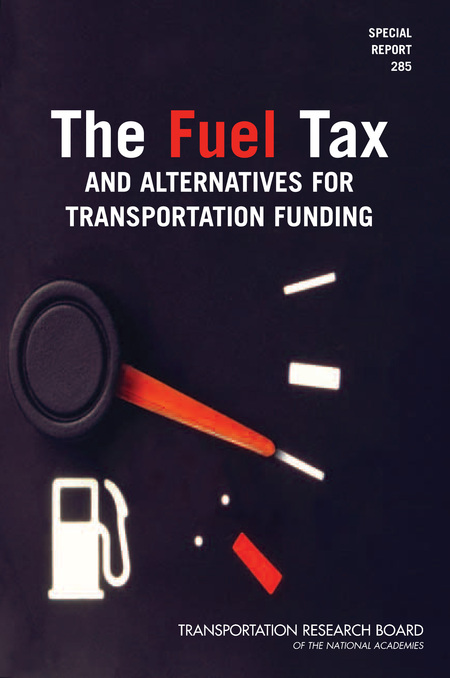 TRB Special Report 285: The Fuel Tax and Alternatives for Transportation Funding examines the viability of existing revenue sources, the merits of present transportation finance arrangements, and potential directions for reform of transportation finance. According to the report, fuel taxes can remain the primary funding source for the nation's highways for at least another decade, but eventually replacing them with a system for metering road use and charging accordingly could benefit travelers and the public. In addition, the committee that developed the report suggests that while the current funding system helps maintain existing highways and build new ones and ensures that users pay most of these costs, it does not help transportation agencies alleviate congestion or target investment in the most valuable projects.