Fluoride in Drinking Water: A Scientific Review of EPA's Standards (2006)

Get This Book
Visit NAP.edu/10766 to get more information about this book, to buy it in print, or to download it as a free PDF.
« Previous: 5 Musculoskeletal Effects
Page 181 Share Cite
Suggested Citation:"6 Reproductive and Developmental Effects of Fluoride." National Research Council. 2006. Fluoride in Drinking Water: A Scientific Review of EPA's Standards. Washington, DC: The National Academies Press. doi: 10.17226/11571.
×

6
Reproductive and Developmental Effects of Fluoride

The large number of studies gleaned from a search of the literature since 1990 that evaluated reproductive tract structure or function in animal models are outlined in Table 6-1, listing the fluoride dosing regimens and main observations. Most of the studies were conducted for the purpose of hazard identification and involved high doses of fluoride to reveal potentially sensitive reproductive-tract targets and pathways. A few selected

examples illustrate the results of the many hazard identification studies: (1) cessation of spermatogenesis and alterations in the epididymis and vas deferens were observed in rabbits administered sodium fluoride (NaF) at 10 milligrams per kilogram (mg/kg) of body weight for 29 months (Susheela and Kumar 1991); (2) effects on Leydig cells and decreased serum testosterone were observed in rats exposed to NaF at 10 mg/kg for 50 days (Narayana and Chinoy 1994b); and (3) decreased protein in the ovary and uterus and decreased activity of steroidogenic enzymes (3β-hydroxysteriod dehydrogenase [HSD] and 17β-HSD) was found in mice treated with NaF at 10 mg/kg for 30 days (Chinoy and Patel 2001). In general, the hazard identification studies show that the reproductive tract is susceptible to disruption by fluoride at a concentration sufficiently high to produce other manifestations of toxicity.

For risk evaluation, a comprehensive multigenerational study of fluoride effects on reproduction using standard guidelines and adequate numbers of animals has been conducted in rats (Collins et al. 2001a). Rats were administered drinking water with NaF at 0, 25, 100, 175, and 250 mg/L over three generations. No compound-related effects were found on mating or fertility; gestation or lactation; or F1 survival, development, and organ weights. No alterations in the teeth were seen except for mild whitening observed in rats exposed to fluoride at 100 mg/L or greater. That well-conducted study concluded that NaF at concentrations up to 250 mg/L in the drinking water did not alter reproduction in rats (Collins et al. 2001a).

The few studies gleaned from a search of the literature since 1990 that evaluated reproductive effects of fluoride ingestion in humans are outlined in Table 6-2, listing the estimated fluoride exposure and main observations. In highly exposed men with and without skeletal fluorosis (fluoride at 1.5-14.5 mg/L in the drinking water), serum testosterone concentrations were significantly lower than in a control cohort exposed to fluoride at less than 1.0 mg/L in drinking water (Susheela and Jethanandani 1996). Although there was a 10-year difference in the mean ages between the skeletal fluorosis patients (39.6 years) and control subjects (28.7 years), this study suggests that high concentrations of fluoride can alter the reproductive hormonal environment.

In an ecological study of U.S. counties with drinking-water systems reporting fluoride concentrations of at least 3 mg/L (Freni 1994), a decreased fertility rate was associated with increasing fluoride concentrations. Because methods for analyzing the potential amounts and direction of bias in ecological studies are limited, it is possible only to discuss some of the strengths and weaknesses of this complicated study (see Chapter 10 and

Appendix C for a more in-depth discussion of ecologic bias). Freni’s study is actually partially ecologic; the outcome (fertility) is age-standardized at the individual level, while exposure to fluoride and covariates are measured at the group level. Controlling for age of the mother is a strength of the study, but to avoid bias all ecological variables should be standardized in the same fashion (Greenland 1992). The model adjusted for a number of important socioeconomic and demographic variables at the group level, but these might not adequately control for individual-level determinants of fertility such as family income and use of contraceptives. For example, median income (a group-level variable) and family income (an individual-level variable) may have independent and interactive effects on outcome. One of the two ecologic exposure measures examined the percentage of the population served by water systems with fluoride concentrations of at least 3 mg/L. That has the potential advantage of not assuming an effect at lower fluoride concentrations (as does the mean fluoride concentration, the other exposure measure), but it has the disadvantage that, unlike individual-level studies, nondifferential misclassification of dichotomous exposures within groups tend to bias ecologic results away from the null (Brenner et al. 1992). While the results of the Freni study are suggestive, the relationship between fertility and fluoride requires additional study.

A study of workers in Mexico, who were occupationally exposed to fluoride (estimated to range from 3 to 27 mg/day) producing hydrofluoric acid and aluminum fluoride, found alterations in serum hormone concentrations with normal semen parameters (Ortiz-Perez et al. 2003). However, that study involved a comparison of a high-fluoride-exposed group and a low-fluoride-exposed group with poorly defined exposures and overlapping exposure characteristics.

Overall, the available studies of fluoride effects on human reproduction are few and have significant shortcomings in design and power, limiting inferences.

Studies gleaned from a search of the literature since 1990 that evaluated developmental toxicity in animal models are outlined in Table 6-3, listing the fluoride dosing regimens and main observations. High-dose hazard identification studies, such as a recently reported Xenopus embryo development study using the FETAX assay (Goh and Neff 2003), suggest that developmental events are susceptible to disruption by fluoride.

For risk evaluation, several comprehensive studies of fluoride effects on development using standard guidelines and adequate numbers of animals have been conducted in rats and rabbits (Collins et al. 1995; Heindel et al. 1996; Collins et al. 2001b). Those high-quality studies evaluated fluoride concentrations in drinking water of 0-300 mg/L in rats and 0-400 mg/L in rabbits. Across the studies, there was a trend toward lower maternal body weights and lower maternal intake of food and water at the higher concentrations in both rats and rabbits (250-400 mg/L). Overall, developmental effects of fluoride were minimal, with 250 mg/L in rats being the lowest-observed-adverse-effect level due to skeletal variations (Collins et al. 1995, 2001b). For rabbits, the no-observed-adverse-effect level was >400 mg/L for administration during gestation days 6-19, the period of organogenesis (Heindel et al. 1996).

The few studies gleaned from a search of the literature since 1990 that evaluated developmental effects of fluoride ingestion in humans are outlined in Table 6-4, listing the type of study, estimated fluoride exposure, and main observations. These studies have focused on examining an association between fluoride and three different human developmental outcomes—spina bifida occulta, sudden infant death syndrome, and Down’s syndrome. Two small studies have raised the possibility of an increased incidence of spina bifida occulta in fluorosis-prone areas in India (Gupta et al. 1994, 1995); larger, well-controlled studies are needed to evaluate that possibility further. Studies from New Zealand (Mitchell et al. 1991; Dick et al. 1999) found no association between fluoride and sudden infant death syndrome. In one of those studies (Dick et al. 1999), a nationwide case-control database of sudden infant death syndrome was evaluated for fluoride exposure status and controlled for the method of infant feeding (breast or reconstituted formula) with the conclusion that exposure to fluoridated water prenatally or postnatally at the time of death did not affect the relative risk of sudden infant death syndrome.

ences in water fluoride concentrations. The possible association of cytogenetic effects with fluoride exposure (see Chapter 10) suggests that Down’s syndrome is a biologically plausible outcome of exposure. There are other indications in the literature that environmental exposures could contribute to an increased incidence of Down’s syndrome births among younger mothers (Read 1982; Yang et al. 1999; Hassold and Sherman 2000; Peterson and Mikkelsen 2000).1 There are many difficulties with analyzing the available data on Down’s syndrome and fluoride. First, the source of the data on Down’s syndrome births must be considered. Sources have included birth certificates, hospital records, and reports from parents. Birth certificates are not an ideal source of data because signs of Down’s syndrome are not always readily apparent at birth and the condition, even when diagnosed early, is not always recorded on the birth certificate. Thus, considerable differences can be expected in the data collected when different sources are used to determine the incidence of the disorder. At the present time, the only firm diagnosis of Down’s syndrome comes from examination of chromosomes or DNA. Second, the mother’s history of exposure to fluoride is difficult to determine. The fact that a woman has a baby in one city does not mean she is from that city or indicate how long she has been in the region. Third, the age of the mother is an important risk factor in the occurrence of children with Down’s syndrome; the rates rise exponentially with age.

Overall, the available studies of fluoride effects on human development

are few and have some significant shortcomings in design and power, limiting their impact.

A large number of reproductive and developmental studies in animals have been conducted and published since 1990, and the overall quality of the database has improved significantly. High-quality studies in laboratory animals over a range of fluoride concentrations (0-250 mg/L in drinking water) indicate that adverse reproductive and developmental outcomes occur only at very high concentrations. A few studies of human populations have suggested that fluoride might be associated with alterations in reproductive hormones, fertility, and Down’s syndrome, but their design limitations make them of little value for risk evaluation.

Next: 7 Neurotoxicity and Neurobehavioral Effects »
Fluoride in Drinking Water: A Scientific Review of EPA's Standards Get This Book
× 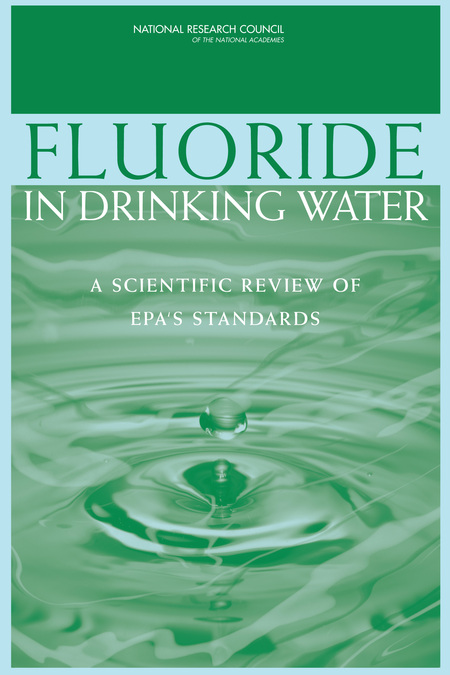 Most people associate fluoride with the practice of intentionally adding fluoride to public drinking water supplies for the prevention of tooth decay. However, fluoride can also enter public water systems from natural sources, including runoff from the weathering of fluoride-containing rocks and soils and leaching from soil into groundwater. Fluoride pollution from various industrial emissions can also contaminate water supplies. In a few areas of the United States fluoride concentrations in water are much higher than normal, mostly from natural sources. Fluoride is one of the drinking water contaminants regulated by the U.S. Environmental Protection Agency (EPA) because it can occur at these toxic levels. In 1986, the EPA established a maximum allowable concentration for fluoride in drinking water of 4 milligrams per liter, a guideline designed to prevent the public from being exposed to harmful levels of fluoride. Fluoride in Drinking Water reviews research on various health effects from exposure to fluoride, including studies conducted in the last 10 years.