Frontiers of Engineering: Reports on Leading-Edge Engineering from the 2005 Symposium (2006)

Get This Book
Visit NAP.edu/10766 to get more information about this book, to buy it in print, or to download it as a free PDF.
« Previous: Challenges in the Implementation of Appropriate Technology Projects: The Case of the DISACARE Wheelchair Center in Zambia
Page 45 Share Cite
Suggested Citation:"Engineering Inputs to the CDC Safe Water System Program." National Academy of Engineering. 2006. Frontiers of Engineering: Reports on Leading-Edge Engineering from the 2005 Symposium. Washington, DC: The National Academies Press. doi: 10.17226/11577.
×

In September 2000, the United Nations General Assembly adopted the Millennium Development Goals (MDGs) to promote “human development as the key to sustaining social and economic progress” (World Bank Group, 2004). One MDG target is to “halve, by 2015, the proportion of people without sustainable access to safe drinking water (1.1 billion) and basic sanitation (2 billion)” (World Bank Group, 2004). Although the world is on schedule to meet the water-supply target (WHO/UNICEF, 2004), even if the goal is met, more than 600 million people will still lack access to safe water in 2015 (WHO/UNICEF, 2000). In addition, although the MDG target specifically states “safe” drinking water, assessing the safety of water at the household level is difficult; thus, the metric for assessing the target is access to water from “improved” sources, such as boreholes or household connections (WHO/UNICEF, 2004). Therefore, people who drink unsafe water from improved sources will not be impacted by the MDG.

Chlorination, first used for disinfection of public water supplies in the early 1900s, has drastically reduced waterborne disease in cities in the developed world (Cutler and Miller, 2005). Elsewhere, although small trials of point-of-use chlorination have been conducted in the past (Mintz et al., 1995), large-scale trials began only in the 1990s, as part of the Pan American Health Organization (PAHO) and U.S. Centers for Disease Control and Prevention (CDC) response to epidemic cholera in Latin America (Tauxe, 1995). The Safe Water System (SWS) Program devised by CDC and PAHO includes three elements: (1) water treatment with dilute sodium hypochlorite at the point of use; (2) storage of water in a safe container; and (3) education to improve hygiene and water practices. In four randomized, controlled trials, SWS resulted in a 44 to 84 percent reduction in the risk of diarrheal disease (Luby et al., 2004; Quick et al., 1999, 2002; Semenza et al., 1998).

Subsequent SWS implementation has varied according to local partnerships and social and economic conditions. The disinfectant solution has been disseminated in 13 countries at national and subnational levels through social marketing in partnership with Population Services International (PSI), a nongovernmental organization (NGO). In Ecuador, Laos, Haiti, and Nepal, the Ministry of Health or a local NGO have implemented the SWS Program at the community level. SWS has also been made available free of charge following disasters in a number of places, including Indonesia, India, and Myanmar (following the 2004 tsunami) and Kenya, Bolivia, Haiti, Indonesia, and Madagascar (after other natural disasters).

The instructions on the bottle of sodium-hypochlorite solution (“product”) used by SWS advises users to add one full cap of the solution to clear water (or two caps to turbid water) in a standard-sized storage container, agitate, and wait 30 minutes before drinking. From 1993 to 2003, CDC assisted PSI in eight countries, and NGOs or government ministries in six additional countries, to establish SWS projects. In each location, the best packaging option for the solution was either selected from available existing plastic bottles and caps or contracted in-country for new bottle and cap designs. A dosing strategy and sodium-hypochlorite concentration were selected after testing chlorine dosages. This strategy led to wide variations in products, with some caps 22-millimeters in diameter with a volume of 8 to 10 mL (Figure 1). For these large-volume caps, the concentration of sodium hypochlorite had to be lowered to ensure correct dosing. 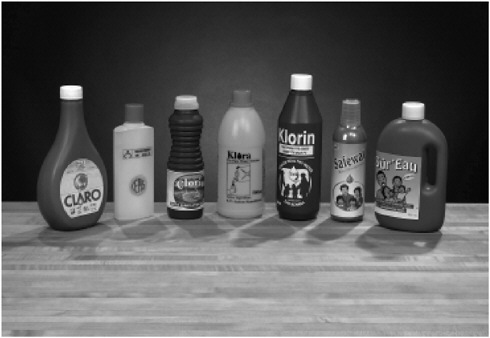 strategies. A loading factor, called the “dose factor,” was developed for comparing dosing strategies for different packaging options. The dose factor is simply the hypochlorite concentration in percent multiplied by the amount (in mL) of hypochlorite solution added to 20 liters of clear water for treatment. The unit of measurement is %-mL, which is convenient for measuring water use (Equation 1). However, scientifically, the dose factor is the concentration of sodium hypochlorite added to 20 liters of water (Equation 2).

There was a large range of dose factors in the initial SWS products (1.6 to 8.0, median 4). To determine the cause of this variation, a consistent methodology was developed to complete dosage testing for SWS implementation. This methodology has since been completed in 15 countries. The methodology includes: (1) collecting three 20-liter containers of water from six representative

sources; (2) testing the water for turbidity, pH, conductivity, and residual chlorine; (3) adding a dose factor of 1.875, 3.75, and 7.5 of sodium hypochlorite to one container from each source; and (4) testing free and total residual chlorine at 1, 2, 4, 8, and 24 hours after the addition of chlorine to determine the dose factor that leads to a free chlorine residual value of less than 2.0 mg/L one hour after the addition and greater than 0.2 mg/L 24 hours after the addition. The one hour value of free chlorine residual (2.0 mg/L) represents the limit of user acceptability, and the 24 hour value represents the minimum level for protection from recontamination. This range also meets the World Health Organization (WHO) guidelines for free chlorine in drinking water (WHO, 2005).

In Angola, 11 of 12 water tests fell into the 3.75 to 7.5 dose factor regime (Figure 2). Water in the Luanda water treatment plant (the tanker-truck filling station) was already chlorinated and thus contained more than 2.0 mg/L free chlorine at all times; the river water had higher chlorine demand, necessitating a dose factor of 7.5.

These consistent results are in contrast to the wide dosage range in the initial products. Thus, the wide initial range can be attributed to compromises in dosing to fit available bottles, inconsistent testing methodologies, and the testing of unrepresentative water sources in pilot project areas.

Based on the consistent results in Angola, we were able to design a standard product. After analyzing design variables, dosing requirements, and constraints, such as transport considerations and available label size, a 150-mL bottle with a 3-mL cap and 1.25 percent hypochlorite solution was chosen. Adding one cap per 20 liters of water (dose factor 3.75), this bottle can treat 1,000 liters of clear water and last a family of 5 or 6 for approximately one month.

PSI (the social-marketing NGO that operates in 70 countries) is adopting this ideal product regionally. PSI designs brand names for health products, sells them at low cost, distributes them through wholesale and retail commercial networks, and generates demand through behavior-change communications, such as radio and TV spots, mobile video units, point-of-sale materials, theatrical presentations, and person-to-person communication. Currently, PSI has SWS programs in 13 countries; programs in eight additional countries are expected to be launched by mid-2006. PSI sold more than 12 million bottles of SWS solution in 2004, and has adopted or will adopt the regional product in 13 countries, including Kenya (Figure 3).

PSI implements the regional product by importing a bottle mold (US$2,200) for installation in a local plastics company. In Nairobi, Kenya, US$12,000 was invested in the design and manufacture of a 3-mL volume cap mold (by AMM Engineering) and production of the caps (by BlowPlast Industries) for just

US$0.011 each. The caps, which are difficult to produce but easy to transport, are then shipped to other countries in the region. Regional production has significantly reduced product cost (e.g., by 55 percent in Madagascar), simplified project initiation, and facilitated the importation of product from neighboring countries in emergencies. The SWS program operated by PSI has not only had an impact at the country level but has also brought these benefits to regions throughout Africa and Asia.

The SWS is a proven, low-cost intervention that has the potential of providing safe drinking water in areas where there will be no infrastructure to treat water in the near future and of significantly reducing morbidity from waterborne diseases and improving the quality of life for millions of people. As SWS was scaled up from pilot projects to at-scale implementation, engineering inputs were critical to ensuring that effective, high-quality, easy-to-use, cost-effective products were designed and produced. To achieve, and even surpass, the MDG, will require continued collaboration between engineers, public health professionals, and in-country implementers. SWS and similar point-of-use treatment programs are our best hope for rapid reductions in the burden of waterborne diseases and deaths in developing countries.

Next: Sustainable Development Through the Principles of Green Engineering »
Frontiers of Engineering: Reports on Leading-Edge Engineering from the 2005 Symposium Get This Book
× 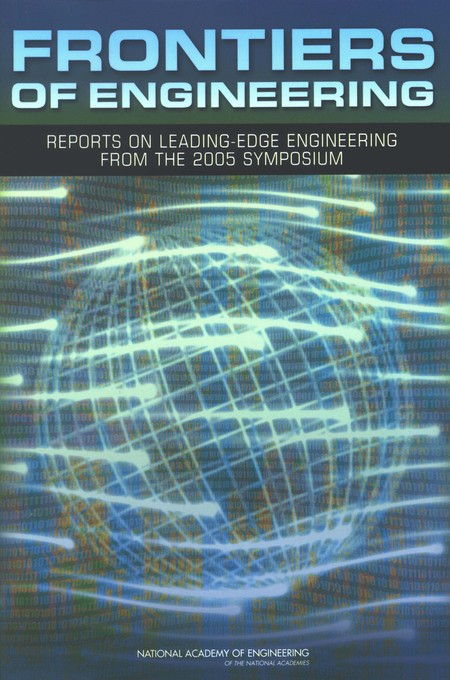 This volume includes 16 papers from the National Academy of Engineering's 2005 U.S. Frontiers of Engineering (USFOE) Symposium held in September 2005. USFOE meetings bring together 100 outstanding engineers (ages 30 to 45) to exchange information about leading-edge technologies in a range of engineering fields. The 2005 symposium covered four topic areas: ID and verification technologies, engineering for developing communities, engineering complex systems, and energy resources for the future. A paper by dinner speaker Dr. Shirley Ann Jackson, president of Rensselaer Polytechnic Institute, is also included. The papers describe leading-edge research on face and human activity recognition, challenges in implementing appropriate technology projects in developing countries, complex networks, engineering bacteria for drug production, organic-based solar cells, and current status and future challenges in fuel cells, among other topics. Appendixes include information about contributors, the symposium program, and a list of meeting participants. This is the eleventh volume in the USFOE series.