Get This Book
Visit NAP.edu/10766 to get more information about this book, to buy it in print, or to download it as a free PDF.
« Previous: 7 Glacier Length and Mass Balance Records
Page 77 Share Cite
Suggested Citation:"8 Boreholes." National Research Council. 2006. Surface Temperature Reconstructions for the Last 2,000 Years. Washington, DC: The National Academies Press. doi: 10.17226/11676.
×

BOREHOLES IN ROCK AND PERMAFROST

Analyses of a large number of continental boreholes have yielded temperature reconstructions for the last 500 years (Lachenbruch and Marshall 1986, Pollack and Huang 2000, Harris and Chapman 2001, Majorowicz et al. 2006). These reconstructions have particular value because they do not have to be calibrated against the instrumental record and because temperature itself is being measured, not a proxy for temperature. Important quantitative uncertainties exist, but general trends in these reconstructions are likely robust.

Borehole-based temperature reconstructions averaged for broad regions (including eastern North America, western North America, Europe, Australia, and South Africa) show warming from the 19th century to the present and persistently cool conditions for the preceding few centuries (Gosnold et al. 1997, Pollack and Huang 2000 and references therein, Huang et al. 2000, Harris and Chapman 2001, Pollack and Smerdon 2004, Majorowicz et al. 2006). Temperature changes for earlier times are not resolvable. Estimates of the magnitude of recent warming as a global (continental) average, or an average over the middle latitudes, are approximately 0.7–0.9°C, from the mid-19th century to the late 20th century (Huang et al. 2000, Pollack and Huang 2000, Harris and Chapman 2001), which is similar to the temperature increase estimated from the instrumental record discussed in Chapter 2 (Figures 8-1 and 8-2). Some 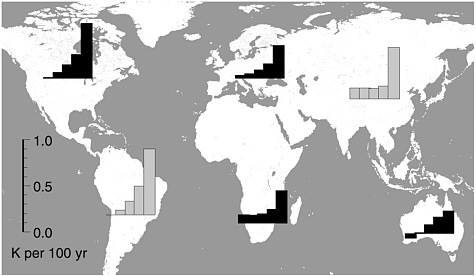 FIGURE 8-1 Summary of borehole-based reconstructions of continental century-long ground surface temperature trends. In each bar plot, the five columns from left to right represent, respectively, the magnitude of temperature increase in the 16th, 17th, 18th, 19th, and 20th centuries. Magnitude of the temperature change is shown as the height of the column. The reconstructions for South America and Asia are lightly shaded to indicate the larger uncertainties in these two continents because of the low spatial density of observations. SOURCE: Huang et al. (2000). Reprinted by permission from Macmillan Publishers Ltd.; copyright 2000. 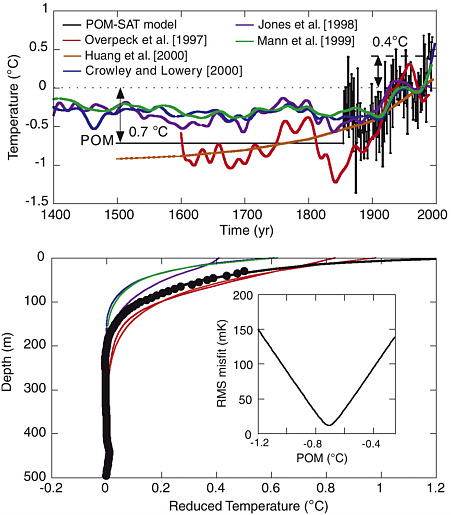 The time resolution and length of borehole-based surface temperature reconstructions are severely limited by the physics of the heat transfer process (Clow 1992). A surface temperature signal is irrecoverably smeared as it is transferred to depth. The time resolution of the reconstruction thus decreases backward in time. For rock and permafrost boreholes, this resolution is a few decades at the start of the 20th century and a few centuries at 1500. Borehole temperatures thus only reveal long-term temperature averages and trends prior to the period of instrumental records; they tell us nothing about decadal variations or specific years, except for the most recent ones. For rock and permafrost boreholes, the thermal smearing is strong enough to prevent recovery of clear temperature signals prior to about 1500. The spatial distribution of borehole temperature records is also strongly weighted toward North America, Europe, South Africa, East Asia, and Australia (Pollack and Smerdon 2004), with almost no information from South America and North or Central Africa and spotty coverage in Asia. Furthermore, the usable boreholes are mostly a legacy of mining exploration, so the spatial coverage has not been chosen to optimize climate reconstruction.

Important quantitative uncertainties in borehole-based reconstructions could arise from two separate sources. First, borehole temperatures respond to the ground surface temperature and not the temperature in the overlying air (Gosnold et al. 1997, Smerdon et al. 2004, Pollack et al. 2005). It is possible that these two temperatures will vary differently over time, for example, due to changes in snow cover and soil moisture. Thus, a key question is whether long-term trends in air and ground temperature are similar. Although there are clear exceptions (Gosnold et al. 1997), the majority of evidence indicates that this similarity is generally strong: As a large-scale geographic average, measured ground temperatures match those predicted directly from air temperature changes (Harris and Chapman 2001), and air versus ground temperature trends are similar at some specific sites (Baker and Ruschy 1993, Majorowicz and Safanda 2005, Majorowicz et al. 2006).

The second important potential source of error in rock borehole-based temperature reconstructions is the downward percolation of groundwater, which can reduce the temperature at depth and be misinterpreted as a warming of the surface over time (Chisholm and Chapman 1992, Harris and Chapman 1995, Ferguson and Woodbury 2005, Majorowicz et al. 2006). This may introduce a “warming” bias to reconstructions based on continental boreholes, the magnitude of which has not been addressed systematically. However, the similarity between measured ground temperatures and ground temperatures calculated using air temperatures (Harris and Chapman 2001) suggests that the average bias must be small over the middle latitudes. In general, groundwater bias can only be a problem in humid climates and in rock that readily conducts groundwater (including all highly fractured rock and many sandstones and

basalts). The groundwater bias cannot be responsible for the strong reconstructed warming in permafrost regions of northern Alaska (Lachenbruch and Marshall 1986) and in the semiarid U.S. and Canadian plains (Gosnold et al. 1997), although it may be partly responsible for the stronger reconstructed warming in eastern versus western North America (Pollack and Huang 2000). A comparison of borehole-based and instrumental 20th century warming trends for specific regions (Pollack and Smerdon 2004) shows no consistent offset related to precipitation: borehole-inferred warming exceeds instrumental warming in the wet regions of North America but is less than instrumental warming in the wet regions of Europe and Southeast Asia. This is further evidence that the groundwater bias is quantitatively small in borehole-based temperature reconstructions on larger scales. The borehole temperature database has been screened to eliminate other sorts of groundwater influences that are more readily apparent (Huang and Pollack 1998).

A separate issue from the uncertainty of reconstructions is that air temperature itself can change for many local reasons, including deforestation and urban expansion (Skinner and Majorowicz 1999, Majorowicz et al. 2006), as discussed in Chapter 2. Borehole temperatures do record such changes, which are real changes of local climate. The borehole temperature database has been screened to eliminate sites with urban influence. Effects of rural land use change are not eliminated and represent part of the human influence on climate in rural regions.

A small number of boreholes in the ice sheets have also been analyzed in conjunction with ice core studies (Cuffey et al. 1994, 1995; Cuffey and Clow 1997; Dahl-Jensen et al. 1998, 1999). Ice sheet boreholes permit longer timescale temperature reconstructions because of the purity of ice, the great depth of the boreholes, and the opportunity for combination with isotopic information from the ice core itself. These analyses can only be conducted in dry cold ice, and so are limited to the polar ice sheets and some high-altitude sites. As with the continental boreholes, the time resolution of reconstructions is strongly limited by the heat flow process; ice boreholes can only be used to reconstruct long-term averaged temperatures. Ice borehole reconstructions have used several different methods, yielding similar results (Cuffey et al. 1995, Dahl-Jensen et al. 1998, Clow and Waddington 1999). The main assumption of these analyses is that the physical process of heat transfer in the ice is well understood.

As with continental boreholes, the ice boreholes give a temperature history that is the local surface temperature. For central Greenland (Cuffey et al. 1995, Cuffey and Clow 1997, Dahl-Jensen et al. 1998), results show a warming over the last 150 years of approximately 1°C ± 0.2°C preceded by a few centuries of cool conditions. Preceding this was a warm period centered around A.D. 1000, which was warmer than the late 20th century by approximately 1°C. An analysis for south-central Greenland (Dahl-Jensen et al. 1998) shows the same pattern of warming and cooling but with larger magnitude changes. Uncertainties on these earlier numbers are a few tenths of a degree Celsius for averages over a few centuries.

A borehole from Law Dome (Dahl-Jensen et al. 1999), in coastal East Antarctica, reveals a warming of approximately 0.7°C from the middle 19th century to present (uncertainty of approximately 0.2°C). This was preceded by a period of comparable

warmth centered on 1500–1600, a 1°C cooler period centered on 1300, and consistently warmer conditions prior to this (with temperature at A.D. 1 being approximately 1°C warmer than the late 20th century). There was no apparent warming during medieval times at this site. Uncertainties on these results for earlier time periods are on the order of a few tenths of a degree Celsius for averages over a few centuries.

Next: 9 Statistical Background »
Surface Temperature Reconstructions for the Last 2,000 Years Get This Book
× 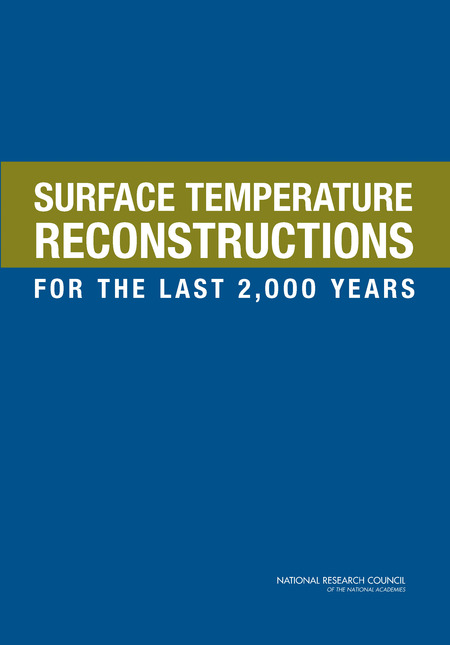