Beyond Bias and Barriers: Fulfilling the Potential of Women in Academic Science and Engineering (2007)

Get This Book
Visit NAP.edu/10766 to get more information about this book, to buy it in print, or to download it as a free PDF.
« Previous: Summary
Page 13 Share Cite
Suggested Citation:"1 Introduction." National Academy of Sciences, National Academy of Engineering, and Institute of Medicine. 2007. Beyond Bias and Barriers: Fulfilling the Potential of Women in Academic Science and Engineering. Washington, DC: The National Academies Press. doi: 10.17226/11741.
×

Science and engineering education and research are increasingly global endeavors. As described in the recent National Academies report Rising Above the Gathering Storm, globalization has already begun to challenge the longstanding scientific pre-eminence of the United States and, therefore, its economic leadership. Identifying the best, brightest, and most innovative science and engineering talent will be crucial if the nation’s industries and the nation itself are to maintain their competitive edge.

In the last 30 years, the numbers and proportion of women obtaining science and engineering bachelor’s, master’s, and doctoral degrees have increased dramatically. Women’s presence has grown across the sciences (Figure 1-1). In the life sciences, women outnumber men in both under-

graduate and graduate programs.2 Women now earn one-third of the PhDs granted by the 50 leading departments in chemistry, 27% in mathematics and statistics, and one-fourth in physics and astronomy. Even in engineering, historically the field with the fewest female participants, women now constitute one-fifth of undergraduate and graduate students.3 In the top 50 engineering departments, women earn one-fourth of the PhDs granted in chemical engineering and 15% in engineering overall.4

In counterpoint to that dramatic educational progress, women, who constitute about half of the total workforce in the United States and half of the degree recipients in a number of scientific fields, still make up only one-fifth of the nation’s scientific and technical workers. As shown in Chapter 3, at every academic career milestone the proportion of women in science and engineering declines. These declines are evident even in 2003, the most recent year for which data are available. In examining the transition into academic positions (Figure 1-2), the declines are greatest in fields requiring

The situation is especially severe for minority-group women in sciences and engineering,5 who are subject to dual discrimination and are required to overcome more barriers to achieve success. The bottom line is that minority-group women doctorates are less likely to be in tenure positions than men of any racial group or white women. The data on women faculty of color are discouraging (Box 1-1).

Women continue to face impediments to academic careers that do not confront men of comparable ability and training. Those barriers cause substantial waste of scientific and engineering talent and training. Several reports issued in the last 3 years have examined the barriers that women interested in science and engineering encounter at various stages of their career development. Some reports, including those by the Congressional Commission on the Advancement of Women and Minorities in Science, Engineering, and Technology (CAWMSET) and the Building Engineering and Science Talent (BEST) Initiative (Box 1-2) have focused on broad pipeline issues. Others, including RAND’s Gender Differences in Major Federal External Grant Programs and the Government Accountability Office’s Women’s Participation in the Sciences Has Increased, but Agencies Need to Do More to Ensure Compliance with Title IX, have focused on the role of funding agencies. A number of university task forces have also issued reports on the institutional climate for women faculty,6 including Harvard 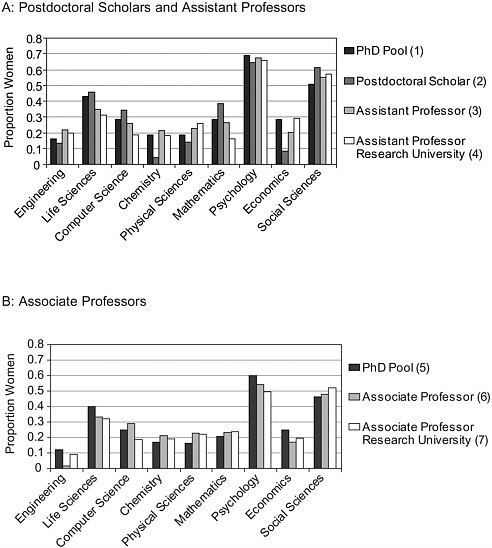 FIGURE 1-2 Comparison of the proportion of women in PhD pools with those in tenure-track or tenured professor positions in 2003, by field.

University’s task forces on Women Faculty and Women in Science and Engineering (Box 1-2).

The National Academies, under the oversight of the Committee on Science, Engineering, and Public Policy, formed the Committee on Maximizing the Potential of Women in Academic Science and Engineering to provide a synthesis of the existing reports and basic research and to examine the implicit and explicit obstacles to educational and academic career advancement of women scientists and engineers, and the effects of race and sex in academic science and engineering careers.

logical, Social, and Organizational Components of Success for Women in Academic Science and Engineering (http://books.nap.edu/catalog/11766.html), published by the National Academies Press, details the proceedings of that event.

This report is organized according to the major themes of the committee’s charge. Chapter 2 examines the research on learning and per-

Throughout the report, quotations, figures, tables, and boxes provide vignettes and additional data to illustrate the main points. Where possible, the committee broke out data by sex and by race or ethnicity. The boxes are organized into five categories: Controversies, Defining the Issues, Experiments and Strategies, Focus on Research, and Tracking and Evaluation. To assist universities in their efforts to remove the barriers that limit women’s participation in academic science and engineering, the committee has developed a scorecard that universities can use to evaluate their progress. It appears as a box in Chapter 6. Appendixes provide information on the committee and its charge and reprint a chapter discussing theories of discrimination from a 2005 National Academies report entitled Measuring Racial Discrimination.

As the committee’s deliberations progressed, it became increasingly clear that various cultural stereotypes and commonly held but unproven beliefs play major, frequently unacknowledged roles in the perception and treatment of women and their work in the scientific and engineering community. Those beliefs have often been cited as arguments against taking steps to improve the position of women in science and engineering or as reasons why such efforts are unnecessary, futile, or even harmful. To facilitate clear, evidence-based discussion of the issues, the committee compiled a list of commonly-held beliefs concerning women in science and engineering (Table S-1). Each is discussed and analyzed in detail in the text of the report.

The committee hopes that each of the actors involved in determining institutional culture and implementing relevant policies—universities, professional societies and higher education organizations, journals, federal funding agencies and foundations, federal agencies, and Congress—will give careful consideration to the extensive evidence supporting its findings and recommendations.

Next: 2 Learning and Performance »
Beyond Bias and Barriers: Fulfilling the Potential of Women in Academic Science and Engineering Get This Book
× 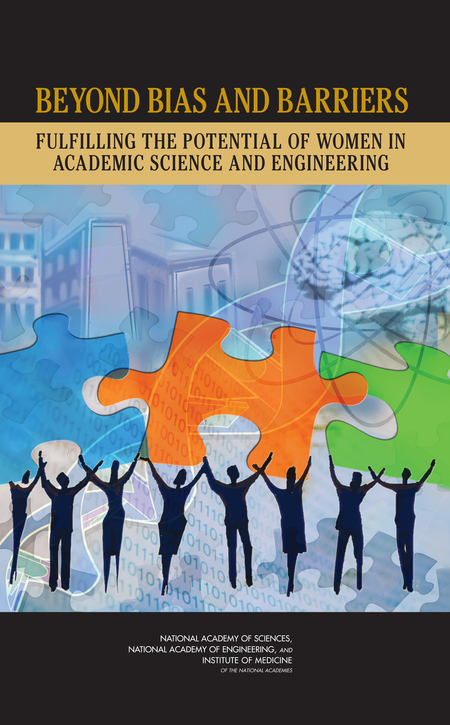 The United States economy relies on the productivity, entrepreneurship, and creativity of its people. To maintain its scientific and engineering leadership amid increasing economic and educational globalization, the United States must aggressively pursue the innovative capacity of all its people—women and men. However, women face barriers to success in every field of science and engineering; obstacles that deprive the country of an important source of talent. Without a transformation of academic institutions to tackle such barriers, the future vitality of the U.S. research base and economy are in jeopardy.

Beyond Bias and Barriers explains that eliminating gender bias in academia requires immediate overarching reform, including decisive action by university administrators, professional societies, federal funding agencies and foundations, government agencies, and Congress. If implemented and coordinated across public, private, and government sectors, the recommended actions will help to improve workplace environments for all employees while strengthening the foundations of America's competitiveness.