Get This Book
Visit NAP.edu/10766 to get more information about this book, to buy it in print, or to download it as a free PDF.
« Previous: Front Matter
Page 1 Share Cite
Suggested Citation:"Summary." Institute of Medicine. 2007. Gulf War and Health: Volume 5: Infectious Diseases. Washington, DC: The National Academies Press. doi: 10.17226/11765.
×

Thousands of US veterans of the Persian Gulf War have reported an array of unexplained illnesses since the war ended in 1991. Many veterans have believed that the illnesses were associated with their military service in southwest Asia during the war. In response, the US Congress legislated in 1998 that the Department of Veterans Affairs (VA) use a specific procedure to determine the illnesses that warrant presumption of a connection to Gulf War service (Public Law [PL] 105-277, Persian Gulf War Veterans Act). Moreover, VA must financially compensate Gulf War veterans in whom the determined illnesses are diagnosed (PL 105-368, Veterans Programs Enhancement Act). To reach those determinations, the law states, VA must obtain independent evaluations of the scientific evidence of associations between illnesses and exposures to various chemical, physical, and biologic substances connected to military service in southwest Asia during the war. The law instructs VA to obtain the scientific evaluations from the National Academy of Sciences (NAS). NAS assigned the task of evaluating the associations to the Institute of Medicine (IOM).

This report is the fifth volume produced by IOM for VA in response to the congressional mandate.1 A committee of nationally recognized experts in infectious diseases was appointed and charged with evaluating the scientific and medical literature on long-term adverse human health outcomes associated with selected infectious diseases pertinent to Gulf War veterans. The conclusions herein characterize the long-term adverse health outcomes associated with infection by the following pathogens: Brucella species (spp.), the cause of brucellosis; Campylobacter spp., nontyphoidal Salmonella spp. and Shigella spp., which cause diarrheal disease; Coxiella burnetii, the cause of Q fever; Leishmania spp., the cause of leishmaniasis; Mycobacterium tuberculosis, which causes tuberculosis; Plasmodium spp., the cause of malaria; and West Nile virus, the cause of West Nile fever. The committee identified those pathogens through the process outlined below. The committee then developed conclusions by studying the relevant published evidence, deliberating to reach consensus, and responding to a formal process of peer review.2

IOM appointed the Committee on Gulf War and Health: Infectious Diseases in January 2005. The committee considered infections that US troops might have contracted in southwest Asia during the Persian Gulf War. At VA’s request, the committee also examined infections that might have afflicted US military personnel deployed to south-central and southwest Asia for Operation Enduring Freedom (OEF)3 and Operation Iraqi Freedom (OIF).4 Thus, the committee’s deliberations covered infectious diseases known to occur in Saudi Arabia, Kuwait, Iraq, Afghanistan, and most countries along their borders (Yemen, Oman, United Arab Emirates,

Identifying the Pathogens to Study

The committee first identified about 100 naturally occurring pathogens that could potentially have infected US troops during their service in the Gulf War, OEF, or OIF. The identified pathogens comprise viruses, bacteria, helminths, and protozoa that have been reported in southwest and south-central Asia, have historically caused outbreaks of illness in military populations, or have generated particular concern among US veterans of the Persian Gulf War. As required by PL 105-277 and PL 105-368, the pathogens include Escherichia coli, Shigella spp., Leishmania spp., and the Phlebovirus pathogens that cause sand fly fever.

In addition, a long-term adverse health outcome could be reversible, related to secondary transmission,5 or both.

Given that definition, the committee identified about 90 infectious diseases that have long-term adverse health outcomes and that were any of the following:

Many of the diseases have never been reported in US military personnel in close temporal relationship to deployment to southwest or south-central Asia for the Gulf War, OEF, or OIF. Even so, the committee could not rule out the possibility that one or more people contracted an unreported disease during deployment. Consequently, the committee created a tabular summary of such diseases’ acute and long-term characteristics.

Finally, the committee examined the likelihood that the candidate infections would have occurred specifically during military deployment to southwest and south-central Asia during the three operations in question. The risk of contracting the disease in the theater of operations must have been equal to or greater than the risk of contracting it in the United States. Moreover, given the natural history of the disease or infection, it must have been diagnosed in US troops in appropriate temporal relationship to deployment.

By applying those criteria to the dozens of infectious diseases recognized initially, the committee identified the group that required in-depth evaluation and conclusions: brucellosis, Campylobacter infection, leishmaniasis, malaria, Q fever, salmonellosis, and shigellosis. Two other diseases did not meet all the criteria but still merited in-depth evaluation: tuberculosis and West Nile virus infection.

Tuberculosis (TB) could cause long-term adverse health outcomes in US troops and veterans deployed to southwest and south-central Asia, where TB is highly endemic. TB has a long history of activation and transmission in military settings. Moreover, about 2.5% of military personnel deployed to OEF and OIF and given predeployment and postdeployment skin tests for TB converted from negative to positive; that is, these troops acquired new TB infections during deployment.6 Therefore, although the committee found no published reports of active TB cases among the troops in question, conclusions about the long-term adverse health outcomes of TB infection are quite pertinent.

Unlike TB, West Nile virus (WNV) has been reported in troops deployed to southwest and south-central Asia, where the virus is endemic. The long-term adverse health outcomes associated with WNV infection are usually manifest during the acute illness—a characteristic that disqualified other diseases from comprehensive evaluation in this report. Nevertheless, dramatic changes in the epidemiology of WNV since the mid-1990s led the committee to make an exception for WNV and to review it in depth.

Identifying the Literature to Review and Evaluate

Conducting extensive searches of the biomedical and epidemiologic peer-reviewed literature on the diseases identified for study yielded about 20,000 potentially relevant

references. On closer examination, some 1,200 references appeared to provide the requisite types and quality of scientific evidence for this study.

Assessing the Strength of the Evidence

By evaluating the evidence in the published scientific literature, the committee determined the relationships between each of the nine diseases of interest and specific adverse health outcomes that might appear weeks to years after the primary infection. Those relationships are conceived in terms of the strength of association between the primary infection and a specific long-term adverse health outcome.

The committee framed its conclusions in categories, described below, that qualitatively rank the strength of the evidence of an association. Used by many previous IOM committees, including those in the Gulf War and Health series, this five-tier framework was adapted from the system used by the International Agency for Research on Cancer to evaluate evidence of the carcinogenicity of various agents.

Sufficient Evidence of a Causal Relationship

Sufficient Evidence of an Association

The evidence from available studies is sufficient to conclude that there is an association. A consistent association has been observed between exposure to a specific agent and a specific health outcome in human studies in which chance and bias, including confounding, could be ruled out with reasonable confidence. For example, several high-quality studies report consistent associations and are sufficiently free of bias, including adequate control for confounding.

Limited or Suggestive Evidence of an Association

Inadequate or Insufficient Evidence to Determine Whether an Association Exists

The evidence from available studies is of insufficient quantity, quality, or consistency to permit a conclusion regarding the existence of an association between exposure to a specific agent and a specific health outcome in humans.

Limited or Suggestive Evidence of No Association

Evidence from well-conducted studies is consistent in not showing an association between exposure to a specific agent and a specific health outcome after exposure of any magnitude. A conclusion of no association is inevitably limited to the conditions, magnitudes of exposure, and length of observation in the available studies. The possibility of a very small increase in risk after exposure cannot be excluded.

Each branch of the US military has polices regarding tuberculin skin testing and treatment of latent TB infection (LTBI). The most effective way to mitigate TB transmission and activation is to identify and treat for LTBI. In addition, the only way to determine whether military personnel and reservists have become infected with M. tuberculosis during their service is to test all personnel for TB shortly before and after deployment. Such testing would make it possible to trace cases of active TB to periods of military service if that is when infection occurred.

Next: 1 Introduction »
Gulf War and Health: Volume 5: Infectious Diseases Get This Book
× 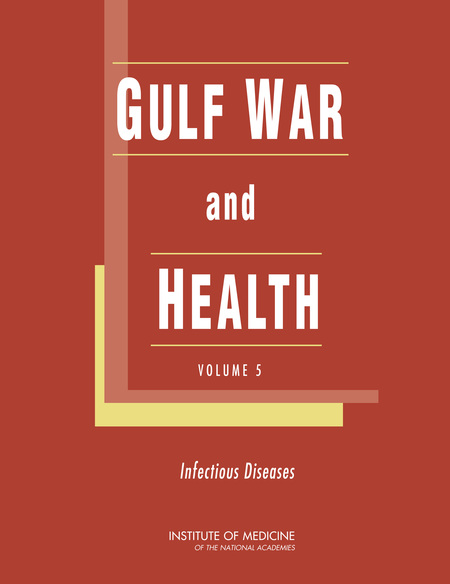 Infectious diseases have been a problem for military personnel throughout history. The consequences in previous conflicts have ranged from frequent illnesses disrupting daily activities and readiness to widespread deaths. Preventive measures, early diagnosis, and treatment greatly limit the exposures and acute illnesses of troops today in comparison with those in armies of the past, but infections and consequent acute illnesses still occur.

Thousands of US veterans of the Persian Gulf War have reported an array of unexplained illnesses since the war ended in 1991. Many veterans have believed that the illnesses were associated with their military service in southwest Asia during the war. This volume of Gulf War and Health evaluates the scientific literature on chemical, biologic, and physical agents to which military personnel in the gulf were potentially exposed and possible long-term adverse health outcomes.