Get This Book
Visit NAP.edu/10766 to get more information about this book, to buy it in print, or to download it as a free PDF.
Page i Share Cite
Suggested Citation:"Front Matter." Institute of Medicine and National Research Council. 2007. Earth Materials and Health: Research Priorities for Earth Science and Public Health. Washington, DC: The National Academies Press. doi: 10.17226/11809.
×

Committee on Research Priorities for Earth Science and Public Health

Board on Earth Sciences and Resources

NATIONAL RESEARCH COUNCIL AND INSTITUTE OF MEDICINE OF THE NATIONAL ACADEMIES

COMMITTEE ON RESEARCH PRIORITIES FOR EARTH SCIENCE AND PUBLIC HEALTH

DAVID A. FEARY, Study Director (Board on Earth Sciences and Resources)

BOARD ON EARTH SCIENCES AND RESOURCES

American Association for the Advancement of Science, Washington, D.C.

We live in an era with unparalleled opportunities to practice disease prevention based on knowledge of the earth environment. Although globally distributed early warning systems can monitor physical hazards such as earthquakes and tsunamis, chemical hazards on the other hand—whether actual or potential and natural or anthropogenically induced—remain difficult to accurately identify in time and space. Such hazards often have lengthy asymptomatic latency periods before disability or disease becomes evident. The scientific information available from the earth sciences—knowledge about earth materials and earth processes, the normal environment, or potential hazards—is essential for the design and maintenance of livable environments and a fundamental component of public health.

A global perspective is necessary when considering the interlinked geochemical and biochemical research issues at the intersection of the earth sciences and public health. The air that carries viruses or earth-sourced particulate matter is clearly global and circulates beyond human control. Pathogens in soil and water have enhanced potential for global spread as food is increasingly transported worldwide. And the availability of irrigation and potable water is increasingly acknowledged as a worldwide issue. As the United Nations International Year of Planet Earth (2008) approaches, it is particularly gratifying that “Earth and Health: Building a Safer Environment” is one of the 10 research themes. This presents an important opportunity for the earth science and public health research communities on a global scale; the committee hopes that this re-

port will provide research focal points and suggest mechanisms to improve communication and collaboration between these communities.

The broad purview of the committee’s task has been a blessing rather than a curse. As the topics and issues addressed by the committee ranged from global to personal, remarkable opportunities arose for interaction among committee members from diverse backgrounds and with differing scientific vocabularies and knowledge bases. From the immense range of potential research opportunities, the committee members were able to achieve a consensus on the priority research directions and mechanisms that we believe will contribute to improved public health and better safeguarding of our earth environment.

This report has been reviewed in draft form by individuals chosen for their diverse perspectives and technical expertise, in accordance with procedures approved by the National Research Council’s (NRC) Report Review Committee. The purpose of this independent review is to provide candid and critical comments that will assist the institution in making its published report as sound as possible and to ensure that the report meets institutional standards for objectivity, evidence, and responsiveness to the study charge. The review comments and draft manuscript remain confidential to protect the integrity of the deliberative process. We wish to

thank the following individuals for their participation in the review of this report:

Although the reviewers listed above provided many constructive comments and suggestions, they were not asked to endorse the conclusions or recommendations nor did they see the final draft of the report before its release. The review of this report was overseen by David S. Kosson, Department of Civil and Environmental Engineering, Vanderbilt University, Nashville, Tennessee, and Edward B. Perrin, School of Public Health, University of Washington, Seattle. Appointed by the NRC, they were responsible for making certain that an independent examination of this report was carried out in accordance with institutional procedures and that all review comments were carefully considered. Responsibility for the final content of this report rests entirely with the authoring committee and the institution.

Next: Summary »
Earth Materials and Health: Research Priorities for Earth Science and Public Health Get This Book
× 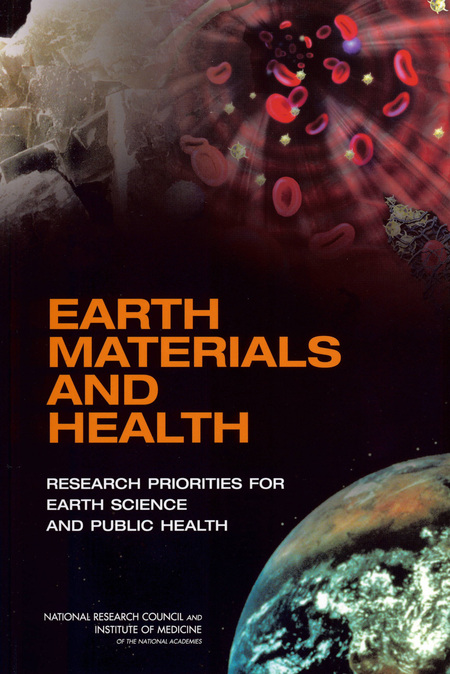 A range of natural earth materials, like arsenic or fluoride, have long been linked to significant human health effects. Improved understanding of the pervasive and complex interactions between earth materials and human health will require creative collaborations between earth scientists and public health professionals. At the request of the National Science Foundation, U.S. Geological Survey, and National Aeronautics and Space Administration, this National Research Council book assesses the current state of knowledge at the interface between the earth sciences and public health disciplines. The book identifies high-priority areas for collaborative research, including understanding the transport and bioavailability of potentially hazardous earth materials, using risk-based scenarios to mitigate the public health effects of natural hazards under current and future climate regimes, and understanding the health risks that result from disturbance of earth systems. Geospatial information - geological maps for earth scientists and epidemiological data for public health professionals - is identified as one of the essential integrative tools that is fundamental to the activities of both communities. The book also calls for increased data sharing between agencies to promote interdisciplinary research without compromising privacy.