3
Hurricane Katrina: Challenges for the Community

The affected area of Hurricane Katrina covered three states and approximately 90,000 square miles. In the state of Louisiana alone, approximately 1.7 million people were affected by the storm and needed to be evacuated. This was a daunting task that required evacuating the most densely populated area of the state to unaffected regions both within the state and in other states around the country. The state of Louisiana evacuated approximately 1.5 million people before Hurricane Katrina made landfall. However, approximately 150,000 to 200,000 individuals (accurate numbers were difficult to attain) remained during the storm. While many people chose to stay, others did not have an opportunity to evacuate because of unavailable resources, noted Jimmy Guidry of the Louisiana Department of Health and Hospitals.

During the pre- and post-storm evacuation, the state set up special needs shelters for those with medical needs and began triaging approximately 30,000 to 40,000 people. The largest emergency room of 700 beds was established at an assembly center to take care of people from affected areas. Available resources were stretched further when Hurricane Rita made landfall in the Gulf Coast a few weeks after Hurricane Katrina. While Hurricane Katrina affected primarily the eastern part of Louisiana, Hurricane Rita affected the western part. The challenge in responding to Hurricane Rita was that individuals evacuated before Hurricane Katrina to the western part of Louisiana needed to be reevacuated to the eastern and northern parts of the state. Thus, within two hours of the order to evacuate from the path of Hurricane Rita, every remaining gymnasium and every empty space not in the affected area became a shelter, said Guidry.

In the initial days following the storm flooding of Hurricane Katrina, the state evacuated approximately 12,000 caregivers and their patients from 25 hospitals. This was a slow process. In some cases patients were evacuated, one or two at a time, by boat to a helipad where they were transferred to a helicopter that brought them to the airport, from which they were flown to other states. This evacuation

of hospital patients to out-of-state locations helped to empty beds and prepared hospitals for attending to victims of the storms.

At the time of the workshop, there were still multiple environmental health issues in the area affected by Hurricane Katrina, particularly in New Orleans. A multidisciplinary team comprising both state and federal agencies and workers was formed to address these problems, including (but not limited to) the U.S. Environmental Protection Agency (EPA), the Centers for Disease Control and Prevention (CDC), the U.S. Public Health Service, the Louisiana Department of Environmental Quality (DEQ), and the Louisiana Department of Health and Hospitals/Office of Public Health. The environmental issues of concern included the following:

said Guidry. Wastewater treatment was a crucial task that needed to be accomplished prior to allowing residents to reinhabit the region.

According to Guidry, it was important for people to get back to a sense of normalcy and to move on with their lives as soon as possible. People who were trying to come back to the affected area and rebuild needed to know the risks they were taking. To provide proper risk communication, it was critical to educate health care providers about environmental issues and to ensure their understanding of the science so that they could knowledgeably explain to people the possible environmental impacts of Hurricane Katrina on their health. This task was impeded by the lack of workforce and infrastructure as a result of the storms. Prior to Hurricane Katrina, New Orleans was a mecca in the state for medical care, with one-third of public health employees (450) working in the central Office of Public Health in New Orleans, said Guidry. Many health care facilities, including the downtown Office of Public Health, were closed after the storm, and at the time of the workshop, only 200 of the central Office of Public Health employees in New Orleans had reported back to work.

The economic impact of the storm will change the future of the entire country,

The economic impact of the storm will change the future of the entire country.

asserted Guidry. Prior to the storm, the city was one of the largest ports in the country. The damage from the storm will impact the city’s provision of seafood and tourism—two key components of the local economy. Still, Guidry noted, the destruction may be an opportunity to rebuild Louisiana into a better place and even to lead the country in deciding how to contend with health care for everyone, including the indigent.

CHALLENGES AND NEEDS FOR HEALTH IN NEW ORLEANS

The City of New Orleans Health Department’s mission is to protect, promote, and enhance health status; to advocate and support health maintenance; to develop health policy; and to map diseases and manage their prevention. The department’s goals are to increase the quality and the longevity of the public’s life and to eliminate health disparities, said Kevin Stephens, Director of Health of the New Orleans Health Department. After Hurricanes Katrina and Rita, New Orleans Health Department officials faced many challenges associated with flooding, environmental exposure assessment and monitoring, and infrastructure rebuilding. The city’s public health officials interpreted the exposure data received from scientists for the general population and worked on determining how to protect and ensure the safety of the people who chose to return to their homes.

Hurricane Katrina inundated New Orleans with contaminated floodwaters, making the city a unique toxic dump site. Through sediment testing it was determined that lead, arsenic, chromium, and copper values exceeded the levels for direct ingestion (EPA, 2005b). Petroleum hydrocarbons were detected in some samples; however, they were not widespread but limited to localized areas (EPA, 2005b). Metals, semivolatiles, and polycyclic aromatic hydrocarbons, related to wood-treating activities as well as pesticides from termite control efforts, were also found in the sediment. Among other components found in the sediment were organic compounds and heavy metals, including mercury; however, their levels were below what the Agency for Toxic Substances and Disease Registry (ATSDR) considers to be immediately hazardous to human health, noted Stephens. Lead levels detected in the sediment were similar to pre-Katrina levels, said Stephens. This is not surprising given the age of the New Orleans housing stock and the fact that some of the houses still had lead-based paints.

Among other components found in the sediment were organic compounds and heavy metals, including mercury; however, their levels were below what ATSDR considers to be immediately hazardous to human health.

health effects as long as the proper protective equipment was worn. The agencies recommended avoiding, whenever possible, all contact with sediment deposited by the floodwaters because of potential concerns associated with long-term skin contact. They also recommended that responders wear personal protective equipment, such as gloves and safety glasses.

In the immediate aftermath of a disaster, there is the potential for increased incidence of infectious diseases. To monitor this, the New Orleans Health Department conducted an environmental survey at all the hospitals, emergency rooms, and local ambulatory clinical sites in the city. Because E. coli from exposure to contaminated floodwaters was a concern, the city’s public health officials conducted a survey of patients with diarrhea.

The survey data showed that both watery and bloody diarrhea decreased significantly over time (Figure 3-1). Because of the risk of mold and particulate matter in the air, public health officials in New Orleans also conducted a survey on acute respiratory illnesses. Initially, there was a rise in respiratory illnesses,

FIGURE 3-1 Because E. coli from exposure to contaminated floodwaters was a concern, the city’s public health officials conducted a survey of patients with diarrhea. The survey data showed that both watery and bloody diarrhea decreased significantly over time.

and the department together with CDC launched a full-fledged investigation of those cases. Close analysis suggested that some members of a disaster medical assistance team had viral infections that spread from the group. Precautionary measures such as washing hands were taken, and after the intervention the rates declined, said Stephens.

Surveillance on unintentional injuries, such as motor vehicle crashes, animal bites, and bee stings, was also conducted. It showed that as the floodwaters receded and the disaster-affected areas were cleaned up, most of the threats, such as debris on streets, dark streets, and vermin living in brush piles, slowly resolved themselves.

Questions and Challenges for the New Orleans Health Department

The New Orleans Health Department still has a number of questions that need to be answered, said Stephens.

The last question is very important because public health officers need to reassure the public. False reassurance would serve no purpose and could impede the recovery, cautioned Stephens.

In conclusion, Stephens noted that unintentional injuries seemed to be the predominant problem in New Orleans, and no evidence of infectious disease outbreaks was found. He also noted that protective measures should be taken and that the New Orleans Health Department will continue to monitor data.

Next: 4 Nature and Extent of Environmental Exposures »
Environmental Public Health Impacts of Disasters: Hurricane Katrina: Workshop Summary Get This Book
× 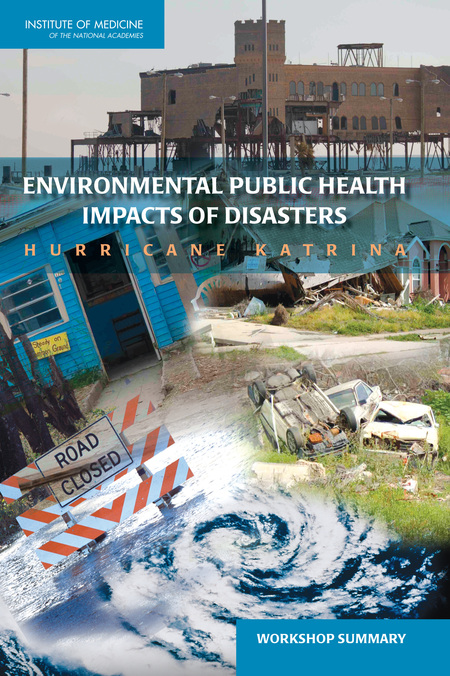 Public health officials have the traditional responsibilities of protecting the food supply, safeguarding against communicable disease, and ensuring safe and healthful conditions for the population. Beyond this, public health today is challenged in a way that it has never been before. Starting with the 9/11 terrorist attacks, public health officers have had to spend significant amounts of time addressing the threat of terrorism to human health.

Hurricane Katrina was an unprecedented disaster for the United States. During the first weeks, the enormity of the event and the sheer response needs for public health became apparent. The tragic loss of human life overshadowed the ongoing social and economic disruption in a region that was already economically depressed. Hurricane Katrina reemphasized to the public and to policy makers the importance of addressing long-term needs after a disaster.

On October 20, 2005, the Institute of Medicine's Roundtable on Environmental Health Sciences, Research, and Medicine held a workshop which convened members of the scientific community to highlight the status of the recovery effort, consider the ongoing challenges in the midst of a disaster, and facilitate scientific dialogue about the impacts of Hurricane Katrina on people's health. Environmental Public Health Impacts of Disasters: Hurricane Katrina is the summary of this workshop. This report will inform the public health, first responder, and scientific communities on how the affected community can be helped in both the midterm and the near future. In addition, the report can provide guidance on how to use the information gathered about environmental health during a disaster to prepare for future events.