A Path to the Next Generation of U.S. Banknotes: Keeping Them Real (2007)

Get This Book
Visit NAP.edu/10766 to get more information about this book, to buy it in print, or to download it as a free PDF.
« Previous: Front Matter
Page 1 Share Cite
Suggested Citation:"Summary." National Research Council. 2007. A Path to the Next Generation of U.S. Banknotes: Keeping Them Real. Washington, DC: The National Academies Press. doi: 10.17226/11874.
×

At the request of the U.S. Department of the Treasury’s Bureau of Engraving and Printing (BEP), the Committee on Technologies to Deter Currency Counterfeiting investigated trends in digital imaging and printing technologies to assess evolving counterfeiting threats to U.S. currency. The most significant threat is represented by nonprofessional, independent individuals with limited, if any, traditional counterfeiting skills. These opportunist, casual counterfeiters pose a particularly onerous risk to the integrity of currency, given the diffuse nature of their counterfeiting activities, which are enabled by affordable, highly capable, advanced reprographic and digital technology. This technology will continue to improve, primarily in response to digital photographic market demand for high-quality reproductions. Within 5 to 10 years, advances in image-processing tools and digital printing technology will allow a casual counterfeiter to attain the level of skill of a computer graphics art specialist. The committee also highlighted a newer threat—the use of the Internet to share best practices and sourcing of specialty materials, permitting the quality of the counterfeits to improve rapidly.

The BEP has adopted a successful proactive strategy of adding features to U.S. banknotes to enhance counterfeit deterrence. The counterfeiting rate of U.S. banknotes is one of the lowest of any major currency. The grand challenge is to up-hold this record while maintaining the “look and feel” of traditional U.S. banknotes. Security features make the currency readily recognizable. Several strategies have been pursued to make the counterfeiter’s job more challenging:

This report identifies new feature ideas that exploit 21st-century materials and technologies to deter 21st-century counterfeiting of banknotes. An appropriate mix of these feature ideas can form the basis for extending the proactive strategy a step or two ahead of the technology available to counterfeiters. This strategy requires that government efforts be directed at feature innovation rather than being focused solely on the integration of features developed by others.

The committee generated ideas and devised and applied an evaluation process for a variety of potential new features that could provide effective countermeasures to these threats. In general, these features employ technologies that are not being developed for currency applications, although several that are in use in other currencies are suggested, since they can be more quickly implemented to provide an added measure of deterrence for a period of time.

In order to refine the list of potential features, the committee found it helpful to describe the counterfeiting threat by means of a basic analytical model that maps the flow of counterfeit currency from its production to its removal from circulation. The committee recognized that the two most important parameters for assessing the effectiveness of a feature are (1) how well it deters simulation and (2) how well it aids in authentication. These parameters formed the basis for determining which features should be selected for further consideration. This report necessarily does not contain an exhaustive list of all possible new features. Additional technologies undoubtedly could be successfully employed to improve counterfeit deterrence. However, the committee believes that the process followed in conducting this study would be applicable to the analysis and development of other candidate features.

On the basis of the maturity of the various technologies for security feature applications, the committee divided the feature ideas into two categories—(1) those that could be fully developed and ready for insertion in a banknote within 7 years and (2) those that would likely require longer than 7 years. Those feature ideas for the longer term were revolutionary and were considered “feature platforms,” since many different feature options could be generated from these technologies. The game-changing technologies were derived from considering what could be possible

in terms of applying advanced technology to security features. They require special materials and/or special manufacturing technologies, such as microfabrication.

The committee anticipates that the battle for the two-dimensional reflected-light image will be lost to opportunist counterfeiters owing to advances in reprographic technology. The features that require a longer development time do not depend on reflected light. Thus, advances in currency features will progress from reliance on printed optical features to reliance on features based on advanced materials and processes that would be far above the simulation capability of opportunist counterfeiters.

The feature ideas that survived the committee’s evaluation process are listed below and described in detail in the report. Some of them can serve as upgrades and/or replacements for current features, while others are quite revolutionary. These features can be combined in different ways to provide a layered defense against a wide array of counterfeiters.

As counterfeiting technology continues to improve, the committee foresees an increased interest by cash handlers in using simple generic devices (such as a penlight) to aid in authenticating banknotes. This trend could also capture the interest of the public so that simple, readily accessible devices could be commonly used to validate banknotes. Many of the innovative security features would be readily detected by a simple device or machine. Features that might be useful to the blind are so noted in the committee’s feature evaluations as discussed in the report.

The feature ideas described in the report require a dedicated research and development (R&D) program to establish their feasibility for application in banknotes and to make them ready for full-rate production implementation. The committee suggests that a significant annual budget would provide the seed funding to initiate a balanced R&D program consisting of low-risk and higher-risk, game-changing technologies. This would allow the BEP to implement a very proactive counterfeit-deterrence strategy. The BEP currently has no such R&D program.

The committee generated so many new feature concepts that a structured development process would be necessary—for example, adapting an existing technology- and product-development process to the specific task of currency design and production. Development priority would take many factors into account, such as the estimated deterrent effectiveness against a projected threat, the need for a balanced mix of features to provide a layered defense against the range of threats, ensuring a high degree of recognizability by the different types of cash handlers, and the estimated time line and implementation cost. These considerations would be matched against the BEP’s internal assessment of the most critical security-feature needs and metrics.

Next: 1 Background and Motivation for the Study »
A Path to the Next Generation of U.S. Banknotes: Keeping Them Real Get This Book
× 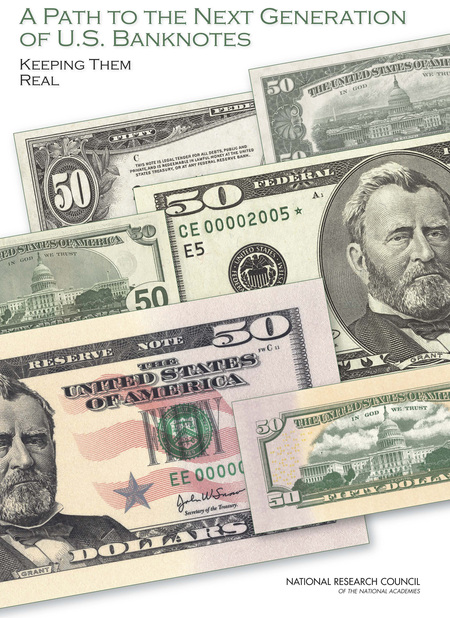 The rapid pace at which digital printing is advancing is posing a very serious challenge to the U.S. Department of the Treasury’s Bureau of Printing (BEP). The BEP needs to stay ahead of the evolving counterfeiting threats to U.S. currency. To help meet that challenge, A Path to the Next Generation of U.S. Banknotes provides an assessment of technologies and methods to produce designs that enhance the security of U.S. Federal Reserve notes (FRNs). This book presents the results of a systematic investigation of the trends in digital imaging and printing and how they enable emerging counterfeiting threats. It also provides the identification and analysis of new features of FRNs that could provide effective countermeasures to these threats and an overview of a requirements-driven development process that could be adapted to develop an advanced-generation currency.