Visit NAP.edu/10766 to get more information about this book, to buy it in print, or to download it as a free PDF.
Page i Share Cite
Suggested Citation:"Front Matter." National Research Council. 1989. Improving Risk Communication. Washington, DC: The National Academies Press. doi: 10.17226/1189.
×

National Academy Press · 2101 Constitution Avenue N.W. · Washington D. C. 20418 NOTICE: The project that is the subject of this report was approved by the Governing Board of the National Researeh Council, whose members are drawn from the councils of the National Academy of Sciences, the National Academy of Engineering, and the Institute of Medicine. The members of the committee responsible for the report were chosen for their special eompetences and with regard for appropriate balance. This report has been reviewed by a group other than the authors according to procedures approved by a Report Review Committee consisting of members of the National Aeademy of Seienees, the National Aeademy of Engineering, and the Institute of Medieine. The study reported here was supported by the Ageney for Toxie Substanees Disease Registry, Allied-Signal, Ameriean Cyanamid Company, Ameriean In- dustrial Health Council, Ameriean Petroleum Institute, Bristol-Myers Com- pany, U.S. Department of Defense, U.S. Department of Energy, Dow Chemieal USA, Eleetrie Power Researeh Institute, U.S. Environmental Proteetion Agency, Exxon Corporation, Hereules Incorporated, ILSI Risk Seienee Institute, Mobil Oil Corporation, Monsanto Company, Motor Vehicle Manufaeturers Assoeiation, and National Scienee Foundation. It also has received support from the National Research Council Fund, a pool of private, discretionary, nonfederal funds that is used to support a program of Academy-initiated studies of national issues in which science and technology figure significantly. The NRC Fund consists of contributions from a consortium of private foundations including the Carnegie Corporation of New York, the Charles E. Culpeper Foundation, the William and Flora Hewlett Foundation, the John D. and Catherine T. MaeArthur Foun- dation, the Andrew W. Mellon Foundation, the Rockefeller Foundation, and the Alfred P. Sloan Foundation; and the Aeademy Industry Program, which seeks annual contributions from companies that are concerned with the health of U.S. science and technology and with public policy issues with technological content. Library of Congress Cataloging-in-Publication Data Improving Risk Communieation / Committee on Risk Perception and Commu- nication, Commission on Physical Sciences, Mathematies, and Resourees, Commission on Behavioral and SoeiaI Seiences and Edueation, Na- tional Research Council. p. cm. Bibliography: p. Includes index. ISBN 0-309-03946-0. ISBN 0-309-03943-6 (pbk.). 1. Risk Communieation. I. National Researeh Council (U.S.). Committee on Risk Perception and Communieation. T10.68.I47 1989 89-9464 363.1-dc20 CIP Copyright A) 1989 by the National Academy of Scienees No part of this book may be reproduced by any mechanical, photographic, or electronic process, or in the form of a phonographic recording, nor may it be stored in a retrieval system, transmitted, or otherwise copied for public or private use, without written permission from the publisher, except for the purposes of official use by the U.S. government. Printed in the United States of America First Printing, August 1989 Second Printing, January 1990 Third Printing, March 1990 Forth Printing, June 1990 Fifth Printing, July 1994 Sixth Printing, March 1996 Seventh Printing, 1998

Preface In 1983 the National Research Council completed a study on managing risk, leading to a report Risk Assessment in the Federal Government: Managing the Process. This report focused on im- proving risk assessment and risk decisions within the government. However, a major element in risk management in a democratic so- ciety is communication about risk. Growing concern that risk com- munication was becoming a major problem led to the chartering of a National Research Council committee to examine possibilities for improving social and personal choices on technological issues by improving risk communication. The National Research Council initiated the study out of recog- nition that technological issues, in addition to being critically im- portant, are complex, difficult, and laden with political controversy. Because the issues are scientific and technical in content, and cut across the concerns of many government agencies, scientific disci- plines, and sectors of society, the National Research Council seemed to provide an ideal forum for the conduct of such a study. Moreover, in past work on policy in the areas of risk assessment and risk man- agement (notably, the above-mentioned report on risk assessment), the National Research Council has helped develop concepts widely used in thinking about the policy issues. It became evident in discussions with representatives of some key federal agencies that no single agency was willing to undertake 1X

x PREFA CB the needed study on its own or even to act as the primary source of support for a study at the National Research Council, even though representatives of several agencies recognized the importance of risk communication to their activities. As a result, the National Research Council initiated the study with its own funds, eventually receiving support for about half the cost from a consortium of federal and private sources. To reflect the breadth of issues to be studied, the Committee on Risk Perception and Communication was made responsible to two major units of the National Research Council, the Commission on Physical Sciences, Mathematics, and Resources and the Commission on Behavioral and Social Sciences and Education. The committee represents a cross section of many relevant kinds of experience and expertise. It includes members with extensive experience analyzing, managing, and communicating about diverse risks, including those from radiation, chemicals, drugs, disease, and consumer products. Members have experience in diverse settings, including federal and local decision-making bodies, industry, the mass media, and envi- ronmental and citizens' groups. The committee also exhibits diverse disciplinary backgrounds, including physical and social sciences, law, journalism, public health, and communications research. The Na- tional Research Council has tried in constituting the committee to achieve a balance of perspectives on all these dimensions. The committee's charge was to offer knowledge-based advice to governments, private and nonprofit sector organizations, and con- cerned citizens about the process of risk communication, about the content of risk messages, and about ways to improve risk commu- nication in the service of public understanding and better-informed individual and social choice. This report does not provide a set of prescriptional guidelines, a "how-to" manual for risk communicators. The committee concluded that many participants in the process lack fundamental understanding of the important points that form the basis for successful risk communication. Therefore this report con- centrates on developing those points. The committee believes that without such understanding detailed guidelines would not be useful. With such understanding, organizations should be able to develop their own guidelines to fit their own somewhat unique functions. Committee members met six times during the period from May 1987 to June 1988. The committee sought knowledge from several

PREFACE X1 sources: experimental research on processes of perception, cogni- tion, and understanding in individuals, including studies of the un- derstanding of risk estimates; laboratory and field research on the conditions affecting the effectiveness of communications; and the col- lected experience of individuals and organizations that have engaged in organized communication about risk. The committee discussed a wide range of hazards, including but by no means restricted to those posed by toxic and carcinogenic substances and by radioactivity. It considered communication both about social choices, such as whether or how strictly to regulate hazardous substances or processes, and about personal choices, such as whether to change eating habits to avoid cancer or sexual habits to avoid AIDS. And the committee considered addressing advice to several audiences, including public agencies at all levels of government; legislatures; firms and industrial associations; environmental, consumer, and citizens' groups; journal- ists and mass media organizations; scientists and the organizations that employ them; and the interested public. This report presents the insights of the committee. The report should significantly improve the understanding of what the problems are in risk communication, particularly the risk communication ac- tivities of government and industry. The committee's recornmenda- tions, if followed, would significantly improve the risk communication process. JOHN F. AHEARNE, Chairman Committee on Risk Perception and Communication

Acknowledgments Although this report represents the work of the comrn~ttee, it would not have been produced without the support of professional staff from the National Research Council, who drafted the chapters and refined them on the basis of the committee's discussions and con- clusions: Paul Stern (Chapters 1 through 4), Rob Coppock (Chap- ters 5 and 6), and Lawrence McCray (Chapter 7~. Their resumes are included with those of the committee because of their intellectual contributions, which advanced the committee's efforts throughout the study. The report was greatly improved by the diligent work of its editor, Roseanne Price. In addition, invaluable support was provided by Deborah Reischman for the first half of the committee's tenure and Nancy Crowell for the second half. The committee acknowledges with appreciation presentations made at committee meetings by the following persons: FREDERICK W. ALLEN, Associate Director, Office of Policy Analysis, U.S. Environmental Protection Agency BETSY ANcKER-JoHNsoN, Vice President, General Motors Corporation GERALD L. BARKDOLL, Associate Comrn~ssioner for Planning and Evaluation, U.S. Department of Health and Human Services, Food and Drug Administration RICHARD BAXTER, Senior Vice President, The Roper Organization · .. x~n

Next: Summary »
Improving Risk Communication Get This Book
× 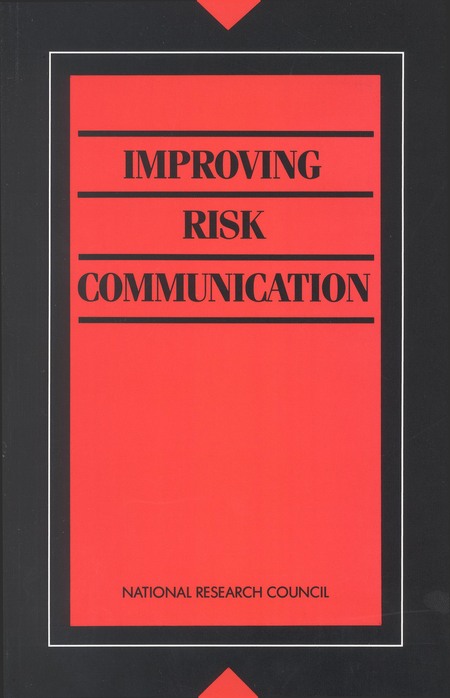 Technological risk and the process of explaining risks to the public have become major public issues. The mention of Bhopal or Love Canal can provoke emotional arguments—not only about the hazards themselves but also about how they were explained to the public. As new laws, the threat of AIDS, and other factors make risk communication more crucial, officials in government and industry are seeking guidelines on how to communicate effectively and responsibly.

This volume offers an approach to better quality in risk communication. The combined insight of experts from government, business, and universities, Improving Risk Communication draws on the most current academic and practical information and analysis. Issues addressed include why risk communication has become more difficult in recent decades, what the major problems are, and how common misconceptions often hamper communication campaigns. Aimed especially at top decisionmakers in government and industry, the book emphasizes that solving the problems of risk communication is as much about improving procedures as improving the content of risk messages.

Specific recommendations for change include a Risk Message Checklist and a call for developing a consumer's guide to risk. Appendixes provide additional details.