Chapter:Appendix A Biographical Sketches of Committee Members and Staff

Get This Book
Visit NAP.edu/10766 to get more information about this book, to buy it in print, or to download it as a free PDF.
« Previous: 6 Recommendations
Page 157 Share Cite
Suggested Citation:"Appendix A Biographical Sketches of Committee Members and Staff." National Research Council. 2007. Tools and Methods for Estimating Populations at Risk from Natural Disasters and Complex Humanitarian Crises. Washington, DC: The National Academies Press. doi: 10.17226/11895.
×

Appendix A
Biographical Sketches of Committee Members and Staff

SUSAN L. CUTTER, Chair, Ph.D., in geography from the University of Chicago, is a Carolina Distinguished Professor and Director of the Hazards Research Lab in the Department of Geography at the University of South Carolina in Columbia. Her areas of expertise include hazards research, risk analysis, vulnerability science, human dimensions of global environmental change, and environmental policy, management and justice. Scientifically, Dr. Cutter has a breadth of experience in the discipline of geography, especially with vulnerability and risk analysis pertaining to hazard situations and international research studies. Dr. Cutter is a member of the Geographical Sciences Committee of the Board on Earth Sciences and Resources. She serves or has served on several National Research Council (NRC) efforts including the Committee on Disaster Research in the Social Sciences; the Steering Committee for Earth Science and Applications from Space: A Community Assessment and Strategy for the Future; the Committee on Planning for Catastrophe: A Blueprint for Improving Geospatial Data, Tools, and Infrastructure; and the Panel on Social and Behavioral Science Research Priorities for Environmental Decision Making.

She led research initiatives to document the economic and developmental impacts of natural disasters, assess country capacity to manage disaster risk and promote investments in disaster risk reduction. Ms. Arnold is currently serving as head of the ProVention Consortium in Geneva, Switzerland, on a two-year-long Staff Exchange Assignment.

DEBORAH BALK is associate professor at the Baruch School of Public Affairs and acting associate director of the Institute for Demographic Research at the City University of New York. Until the fall of 2006, she was research scientist at the Center for International Earth Science Information Network at Columbia University. There she was also lead project scientist for the Socioeconomic Data and Applications Center, funded by the National Aeronautics and Space Administration (NASA), where she worked on large-scale integration of geographic, survey, and administrative data. Among her current projects, she is principal investigator on two studies of urbanization and another project on emerging infectious disease funded by the National Science Foundation (NSF). She is currently a member of the International Union for the Scientific Study of Population Working Group on Urbanisation. She received a Ph.D. in demography from the University of California at Berkeley, and master’s and bachelor’s degrees from the University of Michigan, in Ann Arbor.

BELA HOVY, advanced degree from Utrecht University, The Netherlands, is the chief of the Migration Section of the Population Division of the United Nations in New York. His areas of expertise include refugee demography, statistics, forced migration, and data management and analysis. He has extensive experience with population statistics and field experience in analyzing refugee population statistics. Dr. Hovy serves on the NRC Planning Committee for a Workshop on Forced Migration Typologies for Humanitarian Relief and Policy and the Roundtable on the Demography of Forced Migration.

MEI-PO KWAN, Ph.D. from the University of California, Santa Barbara, is a Distinguished Professor of Social and Behavioral Sciences at Ohio State University in Columbus. Her areas of expertise include urban, transportation, and economic geography; geographic information systems (GIS); geospatial analysis; and three-dimensional geovisualization. She is a member of the board of directors of the University Consortium for Geographic Information Science, a national councilor of the Association of American Geographers (AAG), and Chair of the AAG GIS specialty Group.

JONATHAN D. MAYER, Ph.D. in geography from the University of Michigan, is a professor in the Departments of Epidemiology, Geography, and

International Health at the University of Washington in Seattle. He is adjunct professor of medicine (infectious diseases), family medicine, and health services, and clinical consultant with the Tropical Medicine and Infectious Disease Service at the University of Washington Medical Center. His areas of expertise include medical geography including comparative public health systems; geographical patterns of disease, with an emphasis on infectious disease; disease ecology; new and emerging infectious diseases; infectious disease epidemiology; and clinical applications of medical geography. He travels to Africa frequently to do field work. Dr. Mayer is a member of the Geographical Sciences Committee of the Board on Earth Sciences and Resources. He is a member of the NRC Committee on Research Priorities in the Earth Sciences and Public Health, and a member of the National Institute of Health’s committee on the Epidemiology of Clinical Disorders and Aging. He was a member of the joint Institute of Medicine/National Academy of Sciences Committee on Climate, Ecosystems, Infectious Diseases, and Human Health.

DAVID R. RAIN, Ph.D. from Pennsylvania State University in University Park, is an assistant professor of geography at George Washington University in Washington, D.C. His areas of expertise include demography, population and the environment, international development, urban geography, and U.S. federal census GIS analysis and applications. He has experience analyzing international population data at the national and subnational scale, analysis of data on the international geographic distribution and redistribution of population, geographic information systems, and international experience. Dr. Rain is a member of the Urbanization Working Group of the International Union for the Scientific Study of Population, the Roundtable on Sustainable Forests, and the Population-Environmental Policy Forum.

HAVIDÁN RODRÍGUEZ, Ph.D. from the University of Wisconsin-Madison, has been appointed vice provost for academic affairs at the University of Delaware in Newark where he is a professor of sociology and core faculty member of the Disaster Research Center. His areas of expertise include sociology, disaster research, population composition, geographic distribution, and analysis of population vulnerability. His research has focused on population composition, geographic distribution, national hazards, and vulnerability in the coastal regions of Puerto Rico. Dr. Rodriguez serves on the NRC Disasters Roundtable and served on the Committee on Assessing Vulnerabilities Related to the Nation’s Chemical Infrastructure.

BARBARA BOYLE TORREY, M.S. from Stanford University, is a visiting scholar at the Population Reference Bureau in Washington, D.C. Her areas

of expertise include demography, international policy, population vulnerabilities, and comparative economics. She has been the primary author on several population dynamics and population-economic studies. Ms. Torrey served on the NRC International Advisory Board, the Board of the Population Reference Bureau, and the Science Committee of the International Institute of Applied Systems Analysis (IIASA) in Vienna. She is the former executive director of the NRC Division of Behavioral and Social Sciences and Education, and the Census Bureau’s Center for International Research. She was a member of the NRC Committees on Population and the Human Dimensions of Global Change. She has edited two books, one entitled Population and Land Use Change. She is a fellow of the American Association for the Advancement of Science (AAAS).

BILLIE L. TURNER II, NAS, Ph.D. from the University of Wisconsin at Madison, is the Milton P. and Alice C. Higgins Professor of Environment and Society and director of the Graduate School of Geography at Clark University. Dr. Turner is an internationally recognized scholar who examines human-environmental relationships. His recent work is focusing on global to local land-use and land-cover change to enrich understanding of relationships among population, technology, political economy, and environment across different temporal and spatial scales. He is a member of the Board on Agriculture and Natural Resources and the Board on Earth Sciences and Resources.

JOHN R. WEEKS, Ph.D. from the University of California, Berkeley, is professor of geography and director of the International Population Center at San Diego State University in California. His areas of expertise include remote sensing, demography, geographic applications to demography, international demographic applications, and public health. He applies geographic science to population and public health issues. Dr. Weeks is a member of the Advisory Board of the GIS and Population Science Program at the Center for Spatially Integrated Social Science and is principal investigator of a study funded by the National Institute of Child Health and Human Development (NICHD) that uses remotely sensed imagery and GIS to model health inequalities in Accra, Ghana. Dr. Weeks has been a demographic and statistical consultant and expert witness in nearly 200 criminal and civil legal cases.

TUKUFU ZUBERI, Ph.D. from the University of Chicago, is the Lasry Family Endowed Professor of Race Relations and director of the Center for African Studies at the University of Pennsylvania in Philadelphia. His areas of expertise include demographic research, research in mortality in Africa, interracial contact and social status, African migration system, and population and health. He has demographic research expertise and experi-

ELIZABETH A. EIDE, Study Director, is a senior program officer with the Board on Earth Sciences and Resources at the National Academies. Her areas of expertise include geochronology and petrology applied to crustal processes. Prior to joining the Academies, she worked overseas managing a noble gas geochronology laboratory, and administrating personnel, budget and research programs in geology and geophysics. She received her Ph.D. in geology from Stanford University and B.A. in geology from Franklin and Marshall College.

BARNEY COHEN is director of the Committee on Population at the National Research Council. For the past 14 years he has worked at the National Research Council on numerous domestic and international population-related issues. He has an M.A. in economics from the University of Delaware and a Ph.D. in demography from the University of California, Berkeley.

CAETLIN M. OFIESH is a research associate with the Board on Earth Sciences and Resources at the National Academies. Since graduating from Amherst College with a B.A. in Geology, where she focused on structural geology and tectonics, she has worked in the Boulder, Colorado, office of Environmental Defense, and spent a semester teaching geology to high school sophomores in Zermatt, Switzerland. Prior to that, she interned at the American Geological Institute in Alexandria, Virginia, and worked as a research assistant at the University of Virginia’s School of Engineering, where she published a paper on global food and water supply issues.

NICHOLAS ROGERS is a senior program assistant with the Board on Earth Sciences and Resources. He received a B.A. in history, with a focus on the history of science and early American history, from Western Connecticut State University in 2004. He began working for the National Academies in 2006 and has primarily supported the Board on Earth Sciences and Resources on earth resource and geographical science issues.

TONYA FONG YEE is a program assistant with the Board on Earth Science and Resources. She received her B.S. in business administration with a focus on marketing, from the University of Florida in Gainesville, Florida. Before coming to the National Academies, she interned at the Substance Abuse and Mental Health Services Administration, working on the Safe Schools/Healthy Students Initiative.

Next: Appendix B Acronyms and Abbreviations »
Tools and Methods for Estimating Populations at Risk from Natural Disasters and Complex Humanitarian Crises Get This Book
× 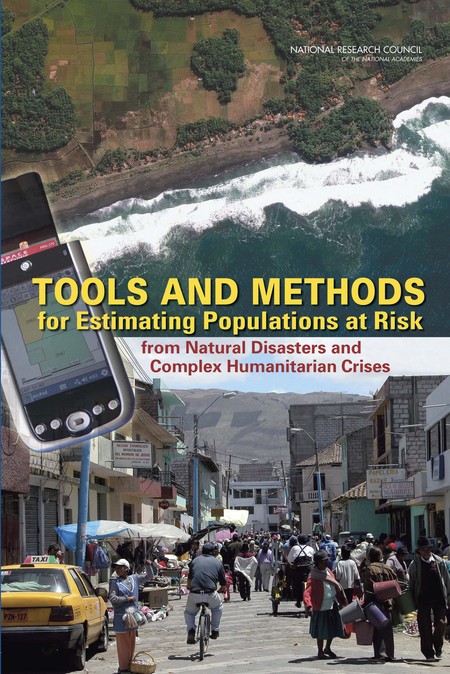 Worldwide, millions of people are displaced annually because of natural or industrial disasters or social upheaval. Reliable data on the numbers, characteristics, and locations of these populations can bolster humanitarian relief efforts and recovery programs. Using sound methods for estimating population numbers and characteristics is important for both industrialized and developing nations. Ensuring that the data are geographically referenced for projection onto maps is essential. However, good data alone are insufficient. Adequate staff training and strong organizational and political desire to maintain and use the information are also required. Tools and Methods for Estimating Populations at Risk from Natural Disasters and Complex Humanitarian Crises, reviews the main methods and tools for making estimates of subnational populations and makes several recommendations to improve the collection and the use of population data for emergency response and development.