The Limits of Organic Life in Planetary Systems (2007)

Get This Book
Visit NAP.edu/10766 to get more information about this book, to buy it in print, or to download it as a free PDF.
« Previous: 7 Life Detection and Biomarkers
Page 84 Share Cite
Suggested Citation:"8 Conclusions and Recommendations." National Research Council. 2007. The Limits of Organic Life in Planetary Systems. Washington, DC: The National Academies Press. doi: 10.17226/11919.
×

The statutory goals of the National Aeronautics and Space Administration (NASA)—sending missions to the solar system, understanding the origin and distribution of life in the galaxy, and contributing to the scientific development of the United States—remain. However, recent long-term planning has come to focus on human missions, first to the Moon, then to Mars, and then beyond. Human missions have both strengths and weaknesses. It is clear that an astronaut can improvise and explore in a fashion not possible for even the most sophisticated robot, including exploration for living systems. Balancing that advantage, in addition to the much greater cost per unit of data obtained, is the fact that human exploration is concomitant with human contamination. No discovery that we can make in our exploration of the solar system would have a greater impact on our view of our position in the cosmos or be more inspiring than the discovery of an alien life form, even a primitive one.

At the same time, it is clear that nothing would be more tragic in the American exploration of space than to encounter alien life and fail to recognize it either because of the consequences of contamination or because of the lack of proper tools and scientific preparation.

The committee’s investigation makes clear that life is possible in forms different from those on Earth. Different specific biomolecules may be considered highly likely in extraterrestrial life. Different architectures at the microscopic and macroscopic levels must also be considered likely. Advocates of replicator-first theories hold that—with reasonable interactions between minerals, polar refractory solvents, and organic species—the spontaneous emergence of genetic biopolymers may be expected. Other scientists feel that the chances of such an event are infinitesimal but that other circumstances may suffice for the origin of life. Whichever group is correct, the likelihood of encountering some form of life in subsurface Mars and sub-ice Europa appears high. Life-detection strategies should be redesigned to maximize the possibility of successful detection of life by seeking intermediates common to the two theories.

Furthermore, life should be considered possible in aqueous environments that are extreme in their solute content, in their acidity or alkalinity, and in their temperature range, especially with ammonia as an antifreeze in low-temperature water-ammonia eutectics. The committee sees no reason to exclude the possibility of life in environments as diverse as the aerosols above Venus and the water-ammonia eutectics of Titan. It seems that life is less likely in more exotic solvents—such as liquid dinitrogen, liquid methane, and supercritical dihydrogen—but this conclusion is based on few data.

Given the importance of developing the understanding and capability to detect and recognize possible life forms in other planetary environments, the committee offers recommendations for three lines of research: labora-

tory studies, field studies, and space studies. The first two are clearly appropriate for both NASA and the National Science Foundation (NSF), and the third is likely to be solely in the purview of NASA.

Laboratory studies are needed that will help to elucidate the origin of life, especially studies that use information from NASA missions, the inventory of organic materials in the cosmos, and interactions between organic materials and minerals set in a planetary context. There is a need for basic research to understand interactions of organic and inorganic species in exotic solvents, including water under extreme conditions (as found on Venus, Mars, Europa, Enceladus, and elsewhere), water-ammonia eutectics at low temperatures (as possible on Titan), and liquid cryosolvents (as found on Triton and elsewhere). A need also exists for synthetic biology that constructs and studies molecular systems capable of Darwinian evolution that are different from standard DNA and RNA, especially those designed to improve understanding of the chemical possibilities that support Darwinian evolution. Such studies should include the search for self-sustaining energy-driven metabolic cycles. The committee’s recommendations to NASA and NSF for specific kinds of laboratory studies are as follows.

Many of the environments on Earth that have analogous environments on other planets and moons have not been adequately sampled. They include the deep subseafloor crust, the deep oligotrophic ocean, and the upper atmosphere. Therefore, the committee places particular emphasis on the search for organisms that have novel metabolisms that use novel energy sources, including black-body radiation or sources thought to be ancient but ubiquitous on other rocky planets. They include organisms that use hydrogen and sulfur as energy sources and iron (FeIII) as an electron acceptor. The focus should be on microbial ecosystems that do not depend on photosynthesis. There is also an opportunity to look at submarine hydrothermal vent environments as primordial and to design experiments to search for organisms that have relic genes and metabolisms that can reveal something about early life. The committee’s recommendations to NASA and NSF for field studies are as follows:

The laboratory and field studies that are recommended above are not expensive by any metric; progress can be made with consistent NASA support at the $20 million annual level. That is a small fraction of the cost of a single launch of a space shuttle or of the contribution over the years to the space station, and it is a nearly negligible fraction of the cost of a human mission to Mars. Laboratory and field studies are a necessary component of such a mission. The results obtained from such studies not only will provide an answer to the question, Why go to Mars? but also will be needed to prevent a human landing on Mars from vitiating a key discovery that might have the greatest of effects for science and society.

The committee’s specific recommendations to NASA for space studies are as follows:

Finally, the committee calls attention to the importance of using remote sensing to detect and characterize extrasolar planets that could support alternative carbon-based life. In addition to looking for evidence of water in

such places, it will be valuable to look for evidence of plate tectonics, because that would indicate hydrothermal activity and the abiotic production of chemical energy and carbon sources that can support life. Studies of atmospheres of extrasolar planets will benefit from access to models of atmospheric conditions on planets that never have evolved oxygenic photosynthesis and that remain anaerobic. Earth did not accumulate oxygen during the first roughly 3 billion years, and it did not form an ozone layer until about 1.5 billion years ago. There is considerable emphasis on looking for contemporary Earth atmospheres that have oxygen and an ozone layer, but there should also be models of atmospheres with different anaerobic microbial ecosystems, atmospheres that might parallel the different stages in the evolution of Earth’s atmospheres over 4 billion years, and atmospheric conditions that could indicate the presence of a tectonically active planet.

Next: Appendix A Glossary »
The Limits of Organic Life in Planetary Systems Get This Book
× 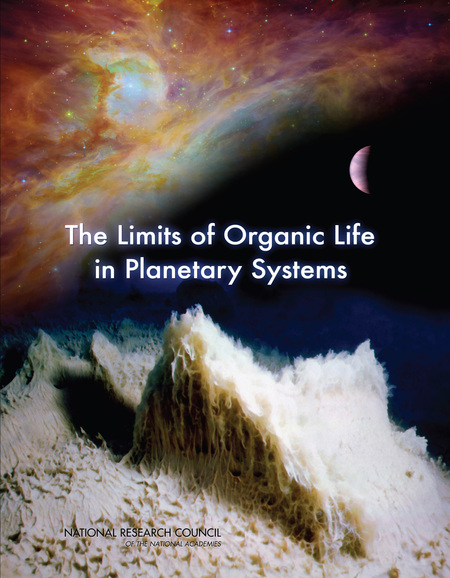 The search for life in the solar system and beyond has to date been governed by a model based on what we know about life on Earth (terran life). Most of NASA's mission planning is focused on locations where liquid water is possible and emphasizes searches for structures that resemble cells in terran organisms. It is possible, however, that life exists that is based on chemical reactions that do not involve carbon compounds, that occurs in solvents other than water, or that involves oxidation-reduction reactions without oxygen gas. To assist NASA incorporate this possibility in its efforts to search for life, the NRC was asked to carry out a study to evaluate whether nonstandard biochemistry might support life in solar system and conceivable extrasolar environments, and to define areas to guide research in this area. This book presents an exploration of a limited set of hypothetical chemistries of life, a review of current knowledge concerning key questions or hypotheses about nonterran life, and suggestions for future research.