An Astrobiology Strategy for the Exploration of Mars (2007)

Get This Book
Visit NAP.edu/10766 to get more information about this book, to buy it in print, or to download it as a free PDF.
« Previous: 6 Astrobiological Assessment of Current Mars Mission Archictecture
Page 95 Share Cite
Suggested Citation:"7 Planetary Protection for Mars Missions." National Research Council. 2007. An Astrobiology Strategy for the Exploration of Mars. Washington, DC: The National Academies Press. doi: 10.17226/11937.
×

For the purposes of defining an astrobiology strategy, planetary protection relates to the ability to protect Mars from contamination by life from Earth, as a means of ensuring that future life sciences experiments and analyses will not be compromised. Concerns deal both with introducing organisms from Earth into martian environments in which they might grow and with introducing organisms or organic contamination originating on Earth into environments in which they might be inadvertently mistaken for indigenous martian materials.

NASA policy and implementation for planetary protection follow COSPAR guidelines. A recent NRC report dealt explicitly with planetary protection, and the committee summarizes briefly the recommendations from that report and the subsequent analyses and interpretations.1 Within the COSPAR guidelines, the degree of action necessary depends on the nature of the mission. Mars is of particular interest in planetary protection due to its relevance to the processes of chemical evolution that might have led to life, the possible origin or occurrence of life in the past or at present, and the potential for contamination to jeopardize future life-related measurements or experiments. Missions such as flybys or orbiters that are to have no direct contact with the planet are designated as Category III, and landers or probes that have direct contact at the surface are designated as Category IV. The requirements imposed on spacecraft for cleanliness and sterilization depend on the category into which they fall.

Category IV missions are subject to a variety of different planetary-protection requirements depending on the science objectives. Missions searching for extant martian life fall into Category IVb. Missions going to a place where liquid water is present or where the presence of the spacecraft could cause liquid water to be present—termed “special regions”—are Category IVc. Other missions to the surface (generally not investigating life; e.g., the Mars Exploration Rovers) fall into Category IVa.

The designation of “special regions” for Mars, pertinent to Category IVc, has been addressed by three separate committees. In 2002, COSPAR defined a special region as “a region within which microorganisms from Earth are likely to propagate, or a region which is interpreted to have a high potential for the existence of extant martian organisms.”2 A 2006 NRC report examined the 1992 NRC findings on planetary protection for Mars3 in light of the new COSPAR guidelines, new data on the survival of extemophiles, and data from orbital and robotic missions.4 Given the compelling nature of the geochemical and geological role played by liquid water on Mars and the potential that any location on the planet might have surface or near-surface water ice, or might have been in contact with relatively recent liquid water, the 2006 report concluded that all of Mars had to be considered as a special region until further observations and analyses could demonstrate that a particular site was not a special region. In essence, that report designated all of Mars as a planetary protection IVc area, unless the mission was to focus primarily on life detection, in which case category IVb would apply.

A IVc designation would have significant ramifications for Mars exploration, in general, and astrobiology, in particular. In short, any lander or rover visiting the surface would have to accept this designation, with its accompanying stringent bioload-reduction requirements. This would have the effect of adding a substantial financial and technical burden to all future missions to the surface, without regard to the scientific intent or objectives. In response, the Mars Exploration Program Analysis Group (MEPAG) chartered a Special Regions Science Analysis Group (SRSAG) to reexamine the issues in the NRC report.5 This group’s primary objective was fivefold:

The SRSAG recommended that a location be designated as a special region if propagation of organisms was likely to occur within a 100-year time frame. It reasonably pointed out that life on Earth did not reproduce at temperatures of less than 258 K or at a water activity (aw) of less than 0.61, and that these conditions were generally not likely to be met on the martian surface absent special geological conditions. To be conservative, the SRSAG adopted a temperature and water activity constraint of T > 253 K and aw > 0.50, respectively, as the specific definition of a special region. With this definition in mind, the only areas on Mars that are currently designated as special regions are the polar regions, gullies, and “pasted terrain” that appear to be formed from liquid water, and specific geological environments such as hot springs that might have access to liquid water.

The recommendations of the SRSAG have yet to be formally adopted by NASA and are currently in review by NASA’s Planetary Protection Advisory Subcommittee.

Both the 2006 NRC report and the 2006 MEPAG report indicate that technology development for sterilization, bioburden reduction, and monitoring of bioburden are high priorities in planetary protection. It should be noted that several of the analytical techniques currently under development and mentioned in those documents cannot undergo the heat-sterilization protocols currently used for bioload reduction. For these technologies to be viable, protocols are necessary that ensure that instruments have already been cleaned and sterilized prior to integration onto the spacecraft but after the spacecraft has undergone heat sterilization, that provide for the use of cooling loops to keep critical instruments cool during sterilization; or that ensure that alternatives to heat sterilization are put in place for these technologies to fly.

Technology development is necessary in areas such as the following: 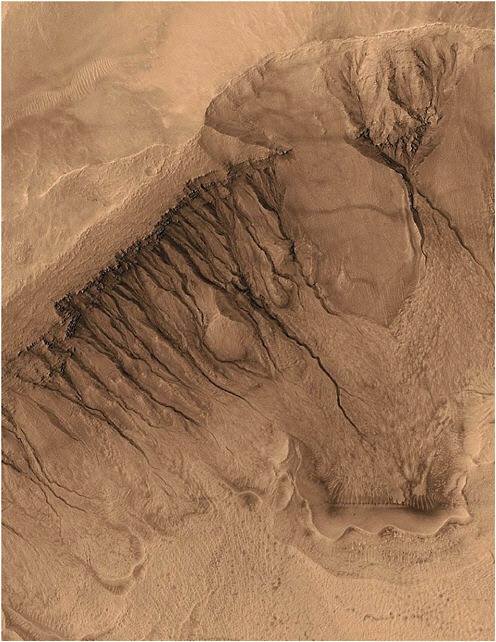 FIGURE 8.1 The gullies at the edge of this crater may have been formed recently by groundwater flowing to the surface from specific horizons. Image from the Mars Orbiter Camera on the Mars Global Surveyor spacecraft courtesy of NASA/JPL/Malin Space Science Systems.

Next: 8 Findings and Recommendations »
An Astrobiology Strategy for the Exploration of Mars Get This Book
× 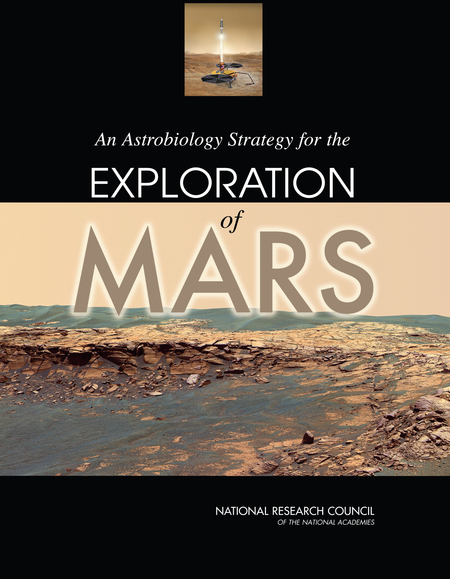 Three recent developments have greatly increased interest in the search for life on Mars. The first is new information about the Martian environment including evidence of a watery past and the possibility of atmospheric methane. The second is the possibility of microbial viability on Mars. Finally, the Vision for Space Exploration initiative included an explicit directive to search for the evidence of life on Mars. These scientific and political developments led NASA to request the NRC’s assistance in formulating an up-to-date integrated astrobiology strategy for Mars exploration. Among other topics, this report presents a review of current knowledge about possible life on Mars; an astrobiological assessment of current Mars missions; a review of Mars-mission planetary protection; and findings and recommendations. The report notes that the greatest increase in understanding of Mars will come from the collection and return to Earth of a well-chosen suite of Martian surface materials.