Visit NAP.edu/10766 to get more information about this book, to buy it in print, or to download it as a free PDF.
Page i Share Cite
Suggested Citation:"Front Matter." National Research Council. 2008. Biosocial Surveys. Washington, DC: The National Academies Press. doi: 10.17226/11939.
×

THE NATIONAL ACADEMIES PRESSâ 500 Fifth Street, N.W.â Washington, DC 20001 NOTICE: The project that is the subject of this report was approved by the Gov- erning Board of the National Research Council, whose members are drawn from the councils of the National Academy of Sciences, the National Academy of Engi- neering, and the Institute of Medicine. The members of the committee responsible for the report were chosen for their special competences and with regard for appropriate balance. This study was supported by Contract No. N01-4-OD-2139 between the National Academy of Sciences and the National Institutes of Health and National Institute on Aging. Any opinions, findings, conclusion, or recommendations expressed in this publication are those of the author(s) and do not necessarily reflect the views of the organization or agencies that provided support for the project. International Standard Book Number-13: 978-0-309-10867-6 (Book) International Standard Book Number-10: 0-309-10867-5 (Book) International Standard Book Number-13: 978-0-309-10868-3 (PDF) International Standard Book Number-10: 0-309-10868-3 (PDF) Library of Congress Control Number: 2007939988 Additional copies of this report are available from the National Academies Press, 500 Fifth Street, NW, Lockbox 285, Washington, DC 20055; (800) 624-6242 or (202) 334-3313 (in the Washington metropolitan area); http://www.nap.edu. Printed in the United States of America. Copyright 2008 by the National Academy of Sciences. All rights reserved. Suggested citation: National Research Council. (2008). Biosocial Surveys. Committee on Advances in Collecting and Utilizing Biological Indicators and Genetic Infor- mation in Social Science Surveys. M. Weinstein, J.W. Vaupel, and K.W. Wachter, Eds. Committee on Population, Division of Behavioral and Social Sciences and Education. Washington, DC: The National Academies Press.

Acknowledgments T he Committee on Population was established in 1983 by the National Research Council (NRC), under the charter of the National Acad- emy of Sciences, to bring population sciences to bear on issues affecting public policy. A dozen years ago, with sponsorship from the U.S. National Institute on Aging (NIA), the Committee embarked on a series of projects relating to the emerging field of biodemography. In 1997, the Committee on Population published Between Zeus and the Salmon: The Biodemography of Longevity, edited by K.W. Wachter and C.E. Finch. This pioneering volume brought together demographers, evolutionary theo- rists, genetic epidemiologists, anthropologists, and biologists, describing implications of their disciplines for understanding and foreseeing the trajectory of human longevity. With support from the U.S. National Insti- tute on Child Health and Human Development, the Committee went on to explore biodemographic aspects of fertility and family formation in the 2003 volume Offspring: Human Fertility Behavior in Biodemographic Perspecï¿½ tive, edited by K.W. Wachter and R.A. Bulatao. The call in the 1997 volume for more interdisciplinary work con- tributed to demand for collecting biological data in the context of large, population-based social and demographic surveys. Advances in biode- mography would require data with better linkages between social and biological domains. Techniques under development made the collection of biological measurements and samples in nonclinical settings more fea- sible. With renewed support from the NIA, the Committee on Population held workshops that led in 2001 to the volume, Cells and Surveys: Should vii

viii ACKNOWLEDGMENTS Biological Measures Be Included in Social Science Research?, edited by C.E. Finch, J.W. Vaupel, and K. Kinsella. The volume is a sequel to Cells and Surveys. It takes stock of the rapid advances made in the field since 2001. The volume is based on a work- shop that was held at the National Research Councilâs Keck Center in Washington, D.C., in June 2006. In the forefront is the question, what has been learned so far from the inclusion of biological indicators in social surveys? What changes in perspective are emerging from the interdisci- plinary communication associated with the enterprise? What biological and genetic data promise to be most useful? How can better models integrate biological information with social, behavioral, and demographic information? The chapters of this volume were enriched by free-flowing discussion and debate at the workshop. In response to suggestions, several addi- tional chapters were added after the workshop. We owe a debt of grati- tude to the individuals who gave of their time to evaluate and strengthen the contributions, providing authors with candid comments to assist them with revisions. The independent review also seeks to ensure that the vol- ume meets the institutional standards of the National Research Council for objectivity, balance, faithfulness to evidence, and responsiveness to the original charge. The review comments and draft manuscript remain confidential to protect the integrity of the process. We thank the following individuals for their participation in the review: Dan G. Blazer, Psychiatry, Duke University Medical Center; Floyd E. Bloom, Department of Molecular and Integrative Neuroscience (emeritus), The Scripps Research Institute; James R. Carey, Department of Entomology, University of California, Davis; Kaare Christensen, Insti- tute of Public Health, University of Southern Denmark; Christopher L. Coe, Department of Psychology, University of Wisconsin; Caleb E. Finch, Davis School of Gerontology, University of Southern California; Vicki A. Freedman, Department of Health Systems and Policy, University of Medicine and Dentistry of New Jersey School of Public Health; Guang Guo, Department of Sociology, University of North Carolina; Judith R. Kidd, Department of Genetics, Yale University School of Medicine; Chris Kuzawa, Department of Anthropology, Laboratory for Human Biology Research, Northwestern University; Margie E. Lachman, Psychology Department, Brandeis University; Partha P. Majumder, Human Genet- ics Unit, Indian Statistical Institute, Kolkata, India; Carlos F. Mendes de Leon, Rush Institute for Healthy Aging and the Department of Preven- tive Medicine, Rush-Presbyterian-St. Lukeâs Medical Center, Chicago; Robert Millikan, School of Public Health, University of North Carolina; Kathleen A. OâConnor, Department of Anthropology and Center for Studies in Demography and Ecology, University of Washington, Seattle;

ACKNOWLEDGMENTS ix Jose M. Ordovas, Nutrition and Genomics Laboratory, Tufts University; Alberto Palloni, Department of Sociology, Northwestern University; GermÃ¡n RodrÃ­guez, Office of Population Research, Princeton University; Luis Rosero-Bixby, Centro Americano de PoblaciÃ³n, University of Costa Rica; Michael L. Rutter, Institute of Psychiatry, Social, Genetic and Devel- opment, Psychiatry Centre, London; Carol D. Ryff, Institute on Aging, Department of Psychology, University of Wisconsin; Nicolas J. Schork, Research and Scripps Genomic Medicine and Department of Molecular and Experimental Medicine, The Scripps Research Institute; Christopher L. Seplaki, Center on Aging and Health and Department of Population, Family, and Reproductive Health, The Johns Hopkins Bloomberg School of Public Health; Mikhail S. Shchepinov, Office of the President, Ret- rotope, Inc., Oxford, U.K.; Jean Chen Shih, Department of Molecular Pharmacology and Toxicology, Pharmaceutical Science Center, University of Southern California; Burton H. Singer, Office of Population Research, Princeton University; MaryFran Sowers, Department of Epidemiology, Center for Integrated Approaches to Complex Diseases, University of Michigan; Duncan Thomas, Department of Economics, Duke University; Kenneth W. Wachter, Department of Demography, University of Cali- fornia, Berkeley; and Keith E. Whitfield, Department of Psychology and Neuroscience, Duke University. The Committee on Population expresses its warm appreciation to Jim Vaupel, who chaired the planning meetings and workshop and took charge as editor of the volume. Special thanks are also due to the mem- bers of the Steering Committee who advised and assisted the chair: Kaare Christensen, Susan Hankinson, Teresa Seeman, Kenneth Wachter, and Kenneth Weiss. Their intellectual contributions can be found throughout this volume. Jennifer Harris at the NIA also provided valuable input and guidance. Committee on Population member Eileen Crimmins, of the Davis School of Gerontology, oversaw the review process. Particular thanks go to Maxine Weinstein who served as consultant on the project and took responsibility for the broad range of practical and intellectual tasks that have gone into shaping it and bringing it to completion. From identifying and recruiting participants to putting the final touches on the work, her efforts have been indispensable. Funding from the NIA has made this volume possible. Richard Suzman, director of the NIA for Behavioral and Social Research, has long been a lively supporter of NRC endeavors, relying on the NRC to assemble appropriate scholars and craft reliable, influential reports. His vision has been crucial in launching and developing the field of biode- mography. John Haaga, Georgeanne Patmios, and Erica Spotts at the NIA have encouraged and guided us in our biodemographic emphases. Thanks are also due to the staff of the NRC. Anthony Mann coordi-

xii CONTENTS 5 An Overview of Biomarker Research from Community and Population-Based Studies on Aging 96 Jennifer R. Harris, Tara L. Gruenewald, and Teresa Seeman 6 The Womenâs Health Initiative: Lessons for the Population Study of Biomarkers 136 Robert B. Wallace 7 Comments on Collecting and Utilizing Biological Indicators in Social Science Surveys 149 Duncan Thomas and Elizabeth Frankenberg 8 Biomarkers in Social Science Research on Health and Aging: A Review of Theory and Practice 156 Douglas C. Ewbank Part II: The Potential and Pitfalls of Genetic Information 9 Are Genes Good Markers of Biological Traits? 175 Mary Jane West-Eberhard 10 Genetic Markers in Social Science Research: Opportunities and Pitfalls 194 George P. Vogler and Gerald E. McClearn 11 Comments on the Utility of Social Science Surveys for the Discovery and Validation of Genes Influencing Complex Traits 208 Harald H.H. GÃ¶ring 12 Overview Thoughts on Genetics: Walking the Line Between Denial and Dreamland, or Genes Are Involved in Everything, But Not Everything Is âGeneticâ 231 Kenneth M. Weiss Part III: New Ways of Collecting, Applying, and Thinking About Data 13 Minimally Invasive and Innovative Methods for Biomeasure Collection in Population-Based Research 251 Stacy Tessler Lindau and Thomas W. McDade 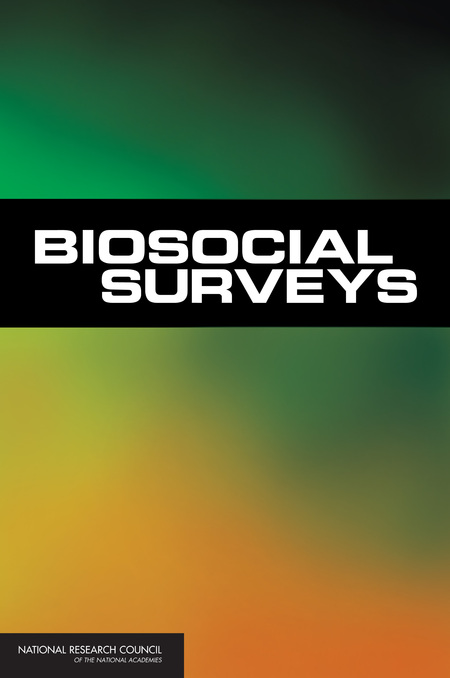 Biosocial Surveys analyzes the latest research on the increasing number of multipurpose household surveys that collect biological data along with the more familiar interviewer–respondent information. This book serves as a follow-up to the 2003 volume, Cells and Surveys: Should Biological Measures Be Included in Social Science Research? and asks these questions: What have the social sciences, especially demography, learned from those efforts and the greater interdisciplinary communication that has resulted from them? Which biological or genetic information has proven most useful to researchers? How can better models be developed to help integrate biological and social science information in ways that can broaden scientific understanding? This volume contains a collection of 17 papers by distinguished experts in demography, biology, economics, epidemiology, and survey methodology. It is an invaluable sourcebook for social and behavioral science researchers who are working with biosocial data.