Treatment of Posttraumatic Stress Disorder: An Assessment of the Evidence (2008)

Visit NAP.edu/10766 to get more information about this book, to buy it in print, or to download it as a free PDF.
Page i Share Cite
Suggested Citation:"Front Matter." Institute of Medicine. 2008. Treatment of Posttraumatic Stress Disorder: An Assessment of the Evidence. Washington, DC: The National Academies Press. doi: 10.17226/11955.
×

THE NATIONAL ACADEMIES PRESS â500 Fifth Street, N.W. âWashington, DC 20001 NOTICE: The project that is the subject of this report was approved by the Govern- ing Board of the National Research Council, whose members are drawn from the councils of the National Academy of Sciences, the National Academy of Engineer- ing, and the Institute of Medicine. The members of the committee responsible for the report were chosen for their special competences and with regard for appropri- ate balance. This study was supported by Contract No. V101(93)P-2136, Task Order No. 9, between the National Academy of Sciences and the Department of Veterans Af- fairs. Any opinions, findings, conclusions, or recommendations expressed in this publication are those of the author(s) and do not necessarily reflect the view of the organizations or agencies that provided support for this project. International Standard Book Number-13:â 978-0-309-10926-0 International Standard Book Number-10:â 0-309-10926-4 Additional copies of this report are available from the National Academies Press, 500 Fifth Street, N.W., Lockbox 285, Washington, DC 20055; (800) 624-6242 or (202)Â 334-3313 (in the Washington metropolitan area); Internet, http://www.nap.edu. For more information about the Institute of Medicine, visit the IOM home page at: www.iom.edu. Copyright 2008 by the National Academy of Sciences. All rights reserved. Printed in the United States of America. The serpent has been a symbol of long life, healing, and knowledge among almost all cultures and religions since the beginning of recorded history. The serpent a Â­ dopted as a logotype by the Institute of Medicine is a relief carving from ancient Greece, now held by the Staatliche Museen in Berlin. Suggested citation: Institute of Medicine (IOM). 2008. Treatment of posttraumatic stress disorder: An assessment of the evidence. Washington, DC: The National Academies Press.

Reviewers T his report has been reviewed in draft form by individuals chosen for their diverse perspectives and technical expertise, in accordance with procedures approved by the NRCâs Report Review Committee. The purpose of this independent review is to provide candid and critical com- ments that will assist the institution in making its published report as sound as possible and to ensure that the report meets institutional standards for objectivity, evidence, and responsiveness to the study charge. The review comments and draft manuscript remain confidential to protect the integrity of the deliberative process. We wish to thank the following individuals for their review of this report: Art Blank, Jr., Psychiatrist, Bethesda, Maryland Gregory Burke, Department of Public Health Sciences, Wake Forest University School of Medicine Allen J. Dietrich, Department of Community and Family Medicine, Dartmouth Medical School and MacArthur Foundation Initiative on Depression and Primary Care at Dartmouth and Duke Ted Ganiats, Department of Family and Preventive Medicine and Health Outcomes Assessment Program (HOAP), University of California, San Diego School of Medicine John E. Halver, School of Aquatic and Fishery Sciences, Professor Emeritus in Nutrition, University of Washington Stevan Hobfoll, The Applied Psychology Center, Kent State University vii

viii REVIEWERS Donald F. Klein, New York Presbyterian Hospital and Columbia University Department of Psychiatry, Professor Emeritus, New York State Psychiatric Institute, Director of Research Emeritus Roderick J. Little, Department of Biostatistics, University of Michigan Craig Mallinckrodt, Eli Lilly and Company James McNulty, Depressive/Manic Depressive Association of Rhode Island Cynthia Mulrow, Department of Medicine, University of Texas Health Science Center at San Antonio Barbara O. Rothbaum, Department of Psychiatry, Emory University School of Medicine Peter P. Roy-Byrne, Department of Psychiatry and Behavioral Sciences, University of Washington School of Medicine and Harborview Center for Healthcare Improvement for Addictions, Mental Illness and Medically Vulnerable Populations (CHAMMP), Harborview Medical Center Myrna M. Weissman, College of Physician and Surgeons, Columbia University Although the reviewers listed above have provided many constructive comments and suggestions, they were not asked to endorse the conclusions or recommendations nor did they see the final draft of the report before its release. The review of this report was overseen by Elaine L. Â­Larson, School of Nursing, Columbia University. Appointed by the Â­ National Â­ Research C Â­ ouncil she was responsible for making certain that an independent examinaÂ­tion of this report was carried out in accordance with institutional procedures and that all review comments were carefully considered. Re- sponsibility for the final content of this report rests entirely with the author- ing committee and the institution.

Preface T his report was commissioned by the Department of Veterans Â­Affairs (VA) to assess the scientific evidence on treatment modalities for Post- traumatic Stress Disorder (PTSD). Reviewing the PTSD treatment literature dating back to 1980, the year the disorder was first Â­ defined by the Diagnostic and Statistical Manual of the American Psychiatric AssoÂ­ciaÂ­ tion, proved to be a challenging task. Assessing the outcomes of treatment depends entirely upon the self-report of those affected, without âobjec- tiveâ measures such as laboratory tests or imaging. Treatment modalities and research methods used in their evaluation have been in continuous development. The last 30 years have also seen dramatic changes in the way scientific evidence has been assessed in general with emerging international standards for conducting systematic qualitative and quantitative reviews that are quite different from the methods used in the 1980s when research on the treatment of PTSD began. In applying a rigorous approach to the assessment of evidence that meets todayâs standards, the committee identified significant gaps in the evidence that made it impossible to reach conclusions establishing the e Â­ fficacy of most treatment modalities. This result was unexpected and may surprise VA and others interested in the disorder. Important treatment decisions for most modalities will need to be made without a strong body One committee member does not concur with the committeeâs specific conclusions concern- ing (a) selective serotonin reuptake inhibitors (SSRIs) and (b) novel antipsychotic medications as add-on treatments, as described in Appendix H; however, that does not affect his agreement with these general statements about the overall inadequacy of the evidence. ix

 PREFACE of evidence meeting current standards (the committee summarizes clinical practice guidelines developed by others in the face of this scientific uncer- tainty). This overall conclusion of scientific inadequacy is not a clinical practice recommendation or guideline. It is also not a judgment on the qual- ity of the research in this field using methods acceptable at the time. The overall conclusion also adds urgency to the committeeâs recommendations for a more strategic research effort that defines the relevant populations and subpopulations; develops and tests treatment modalities alone and in combination, in individual and group formats (for psychotherapy), and of various intensities and durations; uses the latest and most rigorous methods for designing and executing study protocols; and follows all study partici- pants through the end of treatment and for meaningful periods thereafter. The committee was also struck by the scant evidence exploring some of the possibly unique aspects of PTSD in veterans. For the most part we can- not say whether the treatment of PTSD in veterans should be the same as in civilians, and whether important subpopulations of veterans defined by age, sex, trauma type, socioeconomic status, educational level, Â­ comorbidities, and brain injury should be treated the same or differently. The committee could only conclude that well-designed research is needed to answer the key questions regarding the efficacy of treatment modalities in veterans. Success will depend on the collaboration of VA and other government agencies, researchers, clinicians, and patient and veter- ansâ groups and will further require the continued support and attention of policymakers and the public. The individuals returning from current con- flicts and now re-entering civilian life with this disorder deserve no less. Alfred O. Berg Chair

Next: Summary »
Treatment of Posttraumatic Stress Disorder: An Assessment of the Evidence Get This Book
× 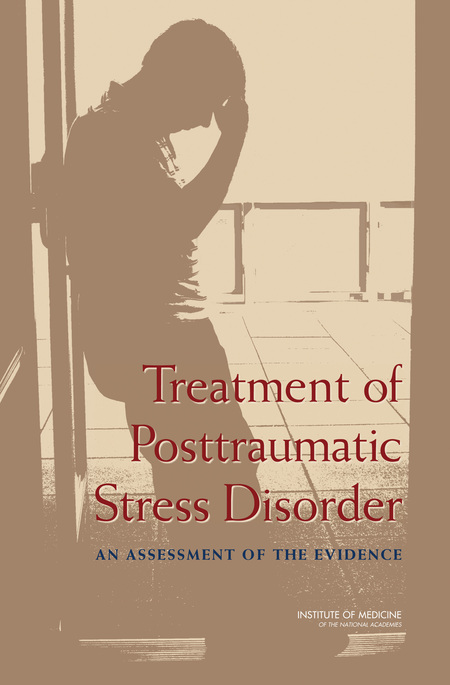 Mental disorders, including posttraumatic stress disorder (PTSD), constitute an important health care need of veterans, especially those recently separated from service. Treatment of Posttraumatic Stress Disorder: An Assessment of the Evidence takes a systematic look the efficacy of pharmacologic and psychological treatment modalities for PTSD on behalf of the Department of Veterans Affairs. By reviewing existing studies in order to draw conclusions about the strength of evidence on several types of treatment, the Committee on the Treatment of Posttraumatic Stress Disorder found that many of these studies were faulty in design and performance, and that relatively few of these studies have been conducted in populations of veterans, despite suggestions that civilian and veteran populations respond differently to various types of treatment. The committee also notes that the evidence is scarce on the acceptability, efficacy, or generalizability of treatment in ethnic and cultural minorities, as few studies stratified results by ethnic background.

Despite challenges in the consistency, quality, and depth of research, the committee found the evidence sufficient to conclude the efficacy of exposure therapies in treating PTSD. The committee found the evidence inadequate to determine efficacy of different types of pharmacotherapies, of three different psychotherapy modalities, and of psychotherapy delivered in group formats. The committee also made eight critical recommendations, some in response to the VA's questions related to recovery and the length and timing of PTSD treatment, and others addressing research methodology, gaps in evidence and funding issues.