Visit NAP.edu/10766 to get more information about this book, to buy it in print, or to download it as a free PDF.
Page i Share Cite
Suggested Citation:"Front Matter." National Research Council. 2008. Parole, Desistance from Crime, and Community Integration. Washington, DC: The National Academies Press. doi: 10.17226/11988.
×

THE NATIONAL ACADEMIES PRESSâ 500 Fifth Street, N.W.â Washington, DC 20001 NOTICE: The project that is the subject of this report was approved by the Govern- ing Board of the National Research Council, whose members are drawn from the councils of the National Academy of Sciences, the National Academy of Engineer- ing, and the Institute of Medicine. The members of the committee responsible for the report were chosen for their special competences and with regard for appropri- ate balance. This study was supported by a contract between the National Academy of Sciences and the National Institute of Justice. Any opinions, findings, conclusions, or rec- ommendations expressed in this publication are those of the author(s) and do not necessarily reflect the views of the organizations or agencies that provided support for the project. International Standard Book Number-13:â 978-309-11081-5 International Standard Book Number-10:â 0-309-11081-5 Additional copies of this report are available from the National Academies Press, 500 Fifth Street, N.W., Lockbox 285, Washington, DC 20055; (800) 624-6242 or (202) 334-3313 (in the Washington metropolitan area); Internet http://www.nap. edu. Printed in the United States of America. Copyright 2008 by the National Academy of Sciences. All rights reserved. Suggested citation: National Research Council. (2008). Parole, Desistance from Crime, and Community Integration. Committee on Community Supervision and Desistance from Crime. Committee on Law and Justice, Division of Behavioral and Social Sciences and Education. Washington, DC: The National Academies Press.

Preface Because the United States has the highest rate of imprisonment in the industrialized world, it also has the highest number of offendersâmore than 600,000âreturning to their communities, mostly cities, every year. Unfortunately, more than one-half of all released offenders will return to prison within 3 years of their release. The proportion of released offenders who return to prison has changed very little over the past three decades. It is in broad public interest to provide services and treatment in prison and as part of community supervision that will reduce the rate of recidivismâthe return to prison for parole violations or the commission of new crimes. Reductions in recidivism would simultaneously reduce state corrections costs and improve community safety. In this volume we attempt to pull together what is known from research about various models of community supervision designed to reduce recidi- vism and promote desistance from crime. We identify gaps in the research literature, and we discuss how currently available resources might best be used to improve community supervision outcomes. This report is based in part on a workshop held by the Committee on Community Supervision and Desistance from Crime in January 2006. Four leading scholars presented papers to stimulate and guide the committeeâs discussion of traditional and new models of community supervision. The committee owes much to their work: David Farabee of the University of California Los Angeles; Faye S. Taxman of Virginia Commonwealth Uni- versity; David B. Wexler, University of Arizona and University of Puerto ix

 PREFACE Rico; and Pamela K. Lattimore, University of South Carolina and Research Triangle Institute. The committeeâs work was also aided by the workshop discussants, who represented a distinguished group from the research and practice communities: Michael Jacobson, Vera Institute in New York City; Martin Horn, commissioner, New York City Department of Corrections; Tom LeBel, University of Wisconsin, Milwaukee; Sharon Neumann, assistant deputy director, Community Sentencing Division, Oklahoma Department of Corrections; Jennifer L. Skeem, University of California, Irvine; Honorable Cindy Lederman, administrative judge, Eleventh Judicial Circuit, Juvenile Division, Miami-Dade County, Florida; Peggy B. Burke, Center for Effective Public Policy, Silver Spring, Maryland; and Jeremy Travis, president, John Jay College of Criminal Justice, New York City. The committee is grateful to all of these wonderful scholars and practitioners whose papers and com- ments provided such a sound foundation for this report. The committee also offers grateful thanks to Glenn R. Schmitt, acting director of the National Institute of Justice (NIJ) at the time the workshop was held. He not only facilitated funding for the committeeâs work, but also gave unstintingly of his time and shared his ideas with the committee and workshop participants. The committee also thanks Thomas Feucht, assis- tant director for research and evaluation at NIJ for his invaluable support for this project, and Patrick Clark, acting director of the evaluation division at NIJ, who first broached the idea of focusing on desistance and the ways in which community supervision could foster less or zero offending among those released from prison. The successful reintegration of former prisoners is one of the most formidable challenges facing society today. We hope that this volume will be of practical use to both the research and corrections communities in helping released offenders to desist from crime and become fully integrated and law-abiding citizens. This report has been reviewed in draft form by individuals chosen for their diverse perspectives and technical expertise, in accordance with procedures approved by the National Research Councilâs Report Review Committee. The purpose of this independent review is to provide candid and critical comments that will assist the institution in mak- ing its published report as sound as possible and to ensure that the report meets institutional standards for objectivity, evidence, and responsiveness to the study charge. The review comments and draft manuscript remain confidential to protect the integrity of the deliberative process. We thank the following individuals for their review of this report: Shawn Bushway, Program on the Economics of Crime and Justice Policy, School of Criminal Justice, University at Albany, State University of New York; Michael E. Ezell, Department of Sociology, Vanderbilt University; Julie Horney, Office of the Dean, School of Criminal Justice, University at

PREFACE xi Albany, State University of New York; Lila Kazemian, Department of So- ciology, John Jay College of Criminal Justice/City University of New York; Michael D. Maltz, Criminal Justice and Information and Decision Sciences (emeritus), University of Illinois at Chicago; Ray Paternoster, Department of Criminology, University of Maryland, College Park; Alex R. Piquero, John Jay College of Criminal Justice/City University of New York; Steven Raphael, Richard and Rhoda Goldman School of Public Policy, University of California, Berkeley; and Amy L. Solomon, The Urban Institute, Wash- ington, DC. Although the reviewers listed above have provided many constructive comments and suggestions, they were not asked to endorse the conclusions or recommendations, nor did they see the final draft of the report before its release. The review of this report was overseen by Alfred Blumstein, The H. John Heinz III School of Public Policy and Management, Carnegie Mellon University. Appointed by the National Research Council, he was respon- sible for making certain that an independent examination of this report was carried out in accordance with institutional procedures and that all review comments were carefully considered. Responsibility for the final content of this report rests entirely with the authoring committee and the institution. Joan Petersilia and Richard Rosenfeld Cochairs, Committee on Community â Supervision and Desistance from Crime

Next: Executive Summary »
Parole, Desistance from Crime, and Community Integration Get This Book
× 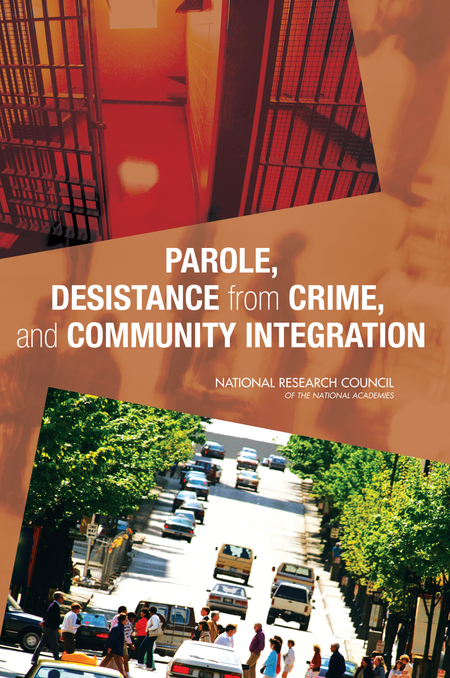 Every day, about 1,600 people are released from prisons in the United States. Of these 600,000 new releasees every year, about 480,000 are subject to parole or some other kind of postrelease supervision. Prison releasees represent a challenge, both to themselves and to the communities to which they return. Will the releasees see parole as an opportunity to be reintegrated into society, with jobs and homes and supportive families and friends? Or will they commit new crimes or violate the terms of their parole contracts? If so, will they be returned to prison or placed under more stringent community supervision? Will the communities to which they return see them as people to be reintegrated or people to be avoided? And, the institution of parole itself is challenged with three different functions: to facilitate reintegration for parolees who are ready for rehabilitation; to deter crime; and to apprehend those parolees who commit new crimes and return them to prison.

In recent decades, policy makers, researchers, and program administrators have focused almost exclusively on "recidivism," which is essentially the failure of releasees to refrain from crime or stay out of prison. In contrast, for this study the National Institute of Justice (NIJ) of the U.S. Department of Justice asked the National Research Council to focus on "desistance," which broadly covers continued absence of criminal activity and requires reintegration into society. Specifically, the committee was asked (1) to consider the current state of parole practices, new and emerging models of community supervision, and what is necessary for successful reentry and (2) to provide a research agenda on the effects of community supervision on desistance from criminal activity, adherence to conditions of parole, and successful reentry into the community. To carry out its charge, the committee organized and held a workshop focused on traditional and new models of community supervision, the empirical underpinnings of such models, and the infrastructure necessary to support successful reentry. Parole, Desistance from Crime, and Community Integration also reviews the literature on desistance from crime, community supervision, and the evaluation research on selected types of intervention.
Stay Connected!