An Assessment of the SBIR Program (2008)

Chapter:Appendix B: NRC Phase I Survey

Get This Book
Visit NAP.edu/10766 to get more information about this book, to buy it in print, or to download it as a free PDF.
« Previous: Appendix A: NRC Phase II Survey and NRC Firm Survey
Page 252 Share Cite
Suggested Citation:"Appendix B: NRC Phase I Survey." National Research Council. 2008. An Assessment of the SBIR Program. Washington, DC: The National Academies Press. doi: 10.17226/11989.
×

Appendix B
NRC Phase I Survey

This section describes a survey of Phase I SBIR awards over the period 1992-2001. The intent of the survey was to obtain information on those which did not proceed to Phase II, although most of the firms that did receive a Phase II were also surveyed.

We chose to survey the Principal Investigator (PI) rather than the firm to reduce the number of surveys that any one person would have to complete. In addition, if the Phase I did not result in a Phase II, the PI was more likely to have a better memory of it than firm officials. There were no PI email addresses for 5,030 Phase I awardees. This reduced the number of surveys sent since the survey was conducted by email.

The agency breakdown, including Phase I survey results, is given in Table App-B-1.

This survey is an important part of a major study commissioned by the U.S. Congress to review the SBIR program as it is operated at various federal agencies. The assessment, by the National Research Council (NRC), seeks to determine both the extent to which the SBIR programs meet their mandated objectives, and to investigate ways in which the programs could be improved. Over 1,200 firms have participated earlier this year in extensive survey efforts related to firm dynamics and Phase II awards. This survey attempts to determine the impact of Phase I awards that do not go on to Phase II. We need your help in this assessment. We believe that you were the PI on the listed Phase I.

We anticipate that the survey will take about 5-10 minutes of your time. If this Phase I resulted in a Phase II, this survey has only 3 questions; if there was not a Phase II, there are 14 questions. Where $ figures are requested (sales or funding,) please give your best estimate. Responses will be aggregated for statistical analysis and not attributed to the responding firm/PI, without the subsequent explicit permission of the firm.

Since you have been the PI on more than one Phase I from 1992 to 2001, you will receive additional surveys. These are not duplicates. Please complete as many surveys for those Phase Is that did not result in a Phase II as you deem to be reasonable.

Further information on the study can be found at <http://www7.nationalacademies.org/sbir>. BRTRC, Inc., is administering this survey for the NRC. If you need assistance in completing the survey, call 877-270-5392. If you have questions about the assessment more broadly, please contact Dr. Charles Wessner, Study Director, NRC.

NOTE: RESULTS APPEAR IN BOLD. RESULTS ARE REPORTED FOR ALL 5 AGENCIES (DoD, NIH, NSF, DoE, AND NASA). EXPLANATORY NOTES ARE IN TYPEWRITER FONT.

Part III. Funding and other assistance

Next: Appendix C: Case Studies »
An Assessment of the SBIR Program Get This Book
× 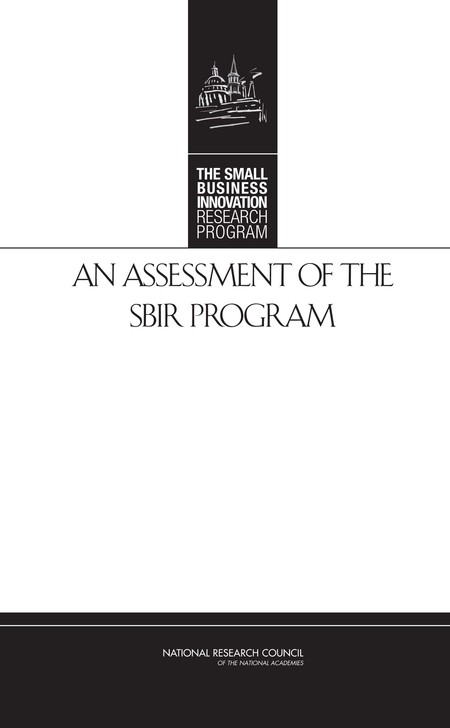 The SBIR program allocates 2.5 percent of 11 federal agencies' extramural R&D budgets to fund R&D projects by small businesses, providing approximately $2 billion annually in competitive awards. At the request of Congress, the National Academies conducted a comprehensive study of how the SBIR program has stimulated technological innovation and used small businesses to meet federal research and development needs. Drawing substantially on new data collection, this report provides a comprehensive overview of the SBIR program at the five agencies representing 96 percent of program expenditure-- DOD, NIH, NSF, DOE, and NASA--and makes recommendations on improvements to the program. Separate books on each agency will also be issued.