Everybody Counts: A Report to the Nation on the Future of Mathematics Education (1989)

Visit NAP.edu/10766 to get more information about this book, to buy it in print, or to download it as a free PDF.
Page i Share Cite
Suggested Citation:"FRONT MATTER." National Research Council. 1989. Everybody Counts: A Report to the Nation on the Future of Mathematics Education. Washington, DC: The National Academies Press. doi: 10.17226/1199.
×

FOREWORD In response to the urgent national need to revitalize mathematics and science education, the National Research Council (NRC) has undertaken an examination of U.S. mathematics education from kinder- garten through graduate study. Major studies being conducted for the NRC by the Mathematical Sciences Education Board, the Board on Mathematical Sciences, and their joint Committee on the Mathematical Sciences in the Year 2000 have the goals of identifying weaknesses in the present system as well as strengths to build on for the future. Everybody Counts is a public preface to the work of these three NRC units and other national organi- zations with which the NRC is cooperating in the revitalization of mathematics education. It outlines in stark terms the seriousness of the situation facing our country emphasizing how crucial it is for science , . . . . ~ ~ .. . . . ~ ~ . . . . . . tecnno~ogy, and the economy ot the nation that all students receive h~gh-quality education in mathematics. Yet, it goes well beyond this. Numerous reports have appeared in recent years analyzing the problems of American education. Every- bod~y Counts could easily be just one more report, pointing to problems and recommending that somebody, somewhere, should do something. Several features distinguish this report from others: It examines mathematics education as all one system, from kindergarten through graduate school. It treats all the major components of the system, from curricula, teaching, and assessment to human resources and national needs. · It does not merely identify problems, but also charts a general course for the future, outlining a national strategy for pursuing that course. . It is not the final report of a commission, but the beginning of a process through which teachers, state and local authorities, and the varied constituencies of mathematics education can draw together in a sustained revitalization effort. This report reflects the thinking of 70 leading Americans, among them classroom teachers; college and university faculty and administrators; research mathematicians and statisticians; scientists and engineers; mathematics supervisors; school principals; school superintendents; chief state school officers; school board members; members of state and local governments; and leaders of parent groups, business, and industry. It also signals to the nation that acting through the National Research Council the National Academy of Sciences, the National Academy of Engineering, and the Institute of Medicine are prepared to participate actively in the long-term work of rebuilding mathematics education in the United States. Few other tasks are more important to our children and to our nation. Cams Frank Press President, National Academy of Sciences Chairman, National Research Council

PREFA CE As science and technology have come to influence all aspects of life, from health and environment to financial affairs and national defense, so mathematics has come to be of vital importance to the educational agenda of our nation. Mathematics is the foundation of science and technology. Increasingly, it plays a major role in determining the strength of the nation's work force. Yet, evidence all around us shows that American students are not fulfilling their potential in mathematics education. Three of every four Americans stop studying mathematics before completing career or job prerequisites. Most students leave school without sufficient preparation in mathematics to cope with either on-thejob demands for problem-solving or college expectations for mathematical literacy. Industry, universities, and the armed forces are thus burdened by extensive and costly demands for remedial education. Our country cannot afford continuing generations of students limited by lack of mathematical power to second-class status in the society in which they live. It cannot afford to weaken its preeminent position in science and technology. The three units which we chair at the National Research Council have committed themselves to reme- dying this situation. As a first step, we commissioned Lynn Arthur Steen, professor of mathematics at St. Olaf College, to write a synthesis of the thinking developed through three years of analysis by the Math- ematical Sciences Education Board, two years of involvement by the Board on Mathematical Sciences (which deals with research), and the first year of work by the Committee on the Mathematical Sciences in the Year 2000, which is concerned with college and university mathematics. Everybody Counts describes various forces that impinge on mathematics and on education computers, research, demography, competitiveness and explains how each is a major force for change, and yet interactions among these forces produce a system that is peculiarly resistant to change. The problems are complex. While the facts are indisputable, there is not complete unanimity on interpretations, priorities, or proposed solutions, even within the scientific community. Nevertheless, change must come. When one compares the potential return on investment in education with the consequences of inaction, it becomes clear that we as a nation have no choice: we must improve the ways our children learn mathematics. Not merely a cry for reform, Everybocly Counts points to specific transitions which our nation's schools and colleges must make in their mathematics programs over the next two decades if they are to meet the needs of students and the country as well as the accelerating momentum of a grass-roots reform effort already well under way. It argues for development of a national support structure to undergird that effort and describes major pieces of such a structure to be put in place over the next year. Its intent is to seek a broad consensus on a national strategy for getting the job done. Throughout, it reflects our prime concern that, whatever any of us do as individuals or through organizations to improve education, we see our role as supporting the efforts of the central person who can bring about meaningful and lasting change: the teacher. . . . vail

Next: OPPORTUNITY »
Everybody Counts: A Report to the Nation on the Future of Mathematics Education Get This Book
× 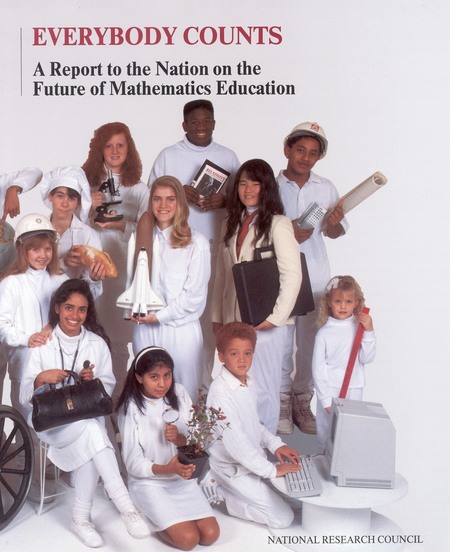 Mathematics is the key to opportunity. No longer only the language of science, mathematics is now essential to business, finance, health, and defense. Yet because of the lack of mathematical literacy, many students are not prepared for tomorrow's jobs. Everybody Counts suggests solutions. Written for everyone concerned about our children's education, this book discusses why students in this country do not perform well in mathematics and outlines a comprehensive plan for revitalizing mathematics education in America, from kindergarten through college.