Get This Book
Visit NAP.edu/10766 to get more information about this book, to buy it in print, or to download it as a free PDF.
« Previous: Summary
Page 9 Share Cite
Suggested Citation:"1 Introduction." National Research Council. 2008. Review of DOE's Nuclear Energy Research and Development Program. Washington, DC: The National Academies Press. doi: 10.17226/11998.
×

Growing energy demands, emerging concerns about the emissions of carbon dioxide from fossil fuel combustion, the increasing and volatile price of natural gas, and a sustained period of successful operation for the existing fleet of nuclear power plants have resulted in a renewal of interest in nuclear power in the United States. The Energy Policy Act of 2005 (EPAct05) advanced this interest by authorizing a number of initiatives intended to both accelerate new nuclear plant construction in the near term and spur longer-term research and development (R&D). Partly as a result of EPAct05, the nuclear power industry is considering applications for the construction of new light water reactor power plants in the United States. The U.S. Nuclear Regulatory Commission (USNRC) reports that it expects 21 applications for 32 new units between 2007 and 2009.1

The government plays a significant role in guiding the future of nuclear power. The nuclear industry in the United States is closely regulated to promote safe and secure power plant operation. The Nuclear Waste Policy Act of 1982 and its 1987 amendments make the government responsible for long-term management of spent reactor fuel. In addition, because power plant construction can be an expensive and lengthy process with substantial uncertainties, particularly those associated with regulatory and environmental permitting, the industry looks to government for assistance in managing the risks of investing in the first new reactors ordered in the United States since 1973.

The Office of Nuclear Energy (NE) at the U.S. Department of Energy (DOE) is a major agent of the government’s responsibility for advancing nuclear power. Specifically, NE takes its mission to be as follows:

… to lead the DOE investment in the development and exploration of advanced nuclear science and technology. NE leads the Government’s efforts to develop new nuclear energy generation technologies; to develop advanced, proliferation-resistant nuclear fuel technologies that maximize energy from nuclear fuel; and to maintain and enhance the national nuclear technology infrastructure.2

One consequence of the renewed interest in nuclear power for the NE mission has been a rapid growth in the NE research budget: by nearly 70 percent from the $193 million appropriated in FY 2003 to $320 million in FY 2006.3 The turnaround over a longer period was even more dramatic; in FY 1998 the NE research budget had collapsed to $2.2 million. In light of this growth, the FY 2006 President’s Budget Request (PBR) asked for funds to be set aside for the National Academy of Sciences to review the NE research programs and budget and to recommend priorities for the programs given the likelihood of constrained budget levels in the future (DOE, 2005). Following passage by Congress of the FY 2006 budget, the National Research Council (NRC) developed a statement of task (Appendix F) for a “comprehensive, independent evaluation of DOE’s nuclear energy program’s goals and plans, and processes for establishing program priorities and oversight (including the method for determining the relative allocation of budgetary resources).”

At the time the statement of task was approved, the scope of the project focused on five elements of the NE program, which were described in the prospectus for the study approved by the National Academies:

nuclear power plants would be governed and to finalize the licensed designs to a point that project and private investment decisions on new plant constructions can be firmly based.

In response to the FY 2006 PBR, NRC established the Committee on Review of DOE’s Nuclear Energy Research and Development Program. The statement of task for the committee closely matched that of the effort described in the above-mentioned prospectus, except that it introduced two issues that somewhat extended the scope. One was the appropriate federal role relative to that of “public, nongovernmental (including universities) and international efforts.” The other charged the committee with examining program management and organization, among other things, that might be “key[s] to success of the [technical] program.”

Following the required appropriations and procurement cycle, the committee first met on August 24, 2006, more than 18 months after the request for the study first appeared in the FY 2006 PBR. During the interim period, however, NE’s research program changed significantly. EPAct05 authorized expanded initiatives for the nuclear program and also resulted in the establishment of a new position, assistant secretary for nuclear energy, within DOE. Even more important was the public emergence in early 2006 of a major programmatic initiative—the Global Nuclear Energy Partnership (GNEP). GNEP’s stated technical objective is to develop, demonstrate, and deploy technologies to reprocess spent reactor fuel in a way that minimizes the risk of fissile material being diverted, reduces the volume of waste in long-term storage, and recovers the energy available in the unused portion of the spent fuel. If executed as envisioned by its advocates, GNEP would result in the construction of commercial scale facilities for spent fuel reprocessing and disposal by burning4 the resultant plutonium and minor actinides together in advanced burner reactors, thereby reducing the radioactive burden on the waste repository. As proposed, GNEP would cost billions of dollars over several decades.

The GNEP initiative had major budgetary implications in the nearer term as well. To accommodate GNEP, the FY 2007 PBR proposed to increase the AFCI budget5 by $154 million, from $79 million to $243 million, while increasing the total NE budget by only $98 million. This proposal would thus have resulted in $56 million being drawn from other NE programs to fund GNEP. However, the Congress did not pass a FY 2007 appropriation for NE; instead it authorized a continuing resolution for the full year, which contained $167 million for the GNEP program through the AFCI account. The FY 2008 PBR includes $395 million for GNEP and $672 million for research and development. Between the FY 2006 appropriation and the FY 2008 request, the NE research and development budget would rise by more than 150 percent (this does not include funding for the Idaho Facilities Man-

agement account, which would increase from $99 million to $104 million). Table 1-1 summarizes the budget history of the NE program.

THE COMMITTEE’S APPROACH TO EVALUATION

In the case of GNEP/AFCI, the committee relied on the Mission Need for GNEP, the GNEP Implementation Strategy, and the GNEP Strategic Plan documents for its evaluation (see Chapter 4 for further discussion). Although these appear to be the authoritative descriptions of the GNEP program, the GNEP Implementation Strategy and the GNEP Strategic Plan documents were not made public until well after the committee started its work. The committee believes that these documents provide an adequate basis for its overall assessment of GNEP but recognizes that they fall far short of the documentation needed for a detailed review. The GNEP Technology Development Plan was released late in the report process, but because it included a disclaimer that the plans it contained did “not necessarily reflect the views and decisions of the Department of Energy,” the committee could not accept it as DOE policy.

The other elements of the program were evaluated in more conventional terms, although each required its own approach:

possible as well, and these have been considered. Because this is a well-documented research program, the committee has used appropriate criteria from the Program Assessment and Review Tool (PART)6 process in its evaluation, as well as the elements of the statement of task.

THE COMMITTEE’S PERSPECTIVE ON THE NE RESEARCH PROGRAM

Despite the changes in program and budget experienced by the NE research program, there are some constant features that set the context for the committee’s evaluation approach, which was influenced by two observations. One is that while the details of the NE program have shifted considerably, its high-level goals have changed little if at all. While stated in somewhat different words in various reports, the committee believes that a reasonable summary of the goals for technology development in support of the NE mission is as follows:

The committee’s second observation is that predicting the course of nuclear technology development over the next several decades entails substantial uncertainties. Indeed, the committee heard presentations from several respected analysts about how this development might take place. Their views of the technological future differed in important ways. An important reason for this divergence is that the development of new nuclear technology requires a planning horizon measured in decades, in no small part because of the capital intensity of the commercial nuclear energy sector. Over such a time period, the committee believes that the success of various candidate technologies will depend on policy and other forces outside the control of any NE technology development program. For example,

How these uncertainties affect the elements of the NE program is discussed at the appropriate place in the balance of this report. In general, however, the committee’s view is that to select the winning technology path from among the options known today would be very premature. This conclusion is especially relevant for research that serves long-term objectives, such as GNEP/AFCI, Generation IV, and NHI.

Chapters 2 through 5 summarize the committee’s evaluation of each of the programs within the statement of task. A concluding chapter presents recommendations on program balance and priorities among the programs, as well as mecha-

nisms for maintaining oversight of the programs as external conditions inevitably change.

Next: 2 Nuclear Power 2010 »
Review of DOE's Nuclear Energy Research and Development Program Get This Book
× 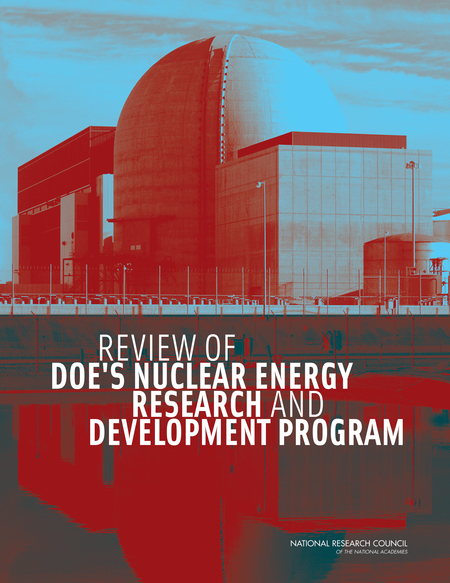 There has been a substantial resurgence of interest in nuclear power in the United States over the past few years. One consequence has been a rapid growth in the research budget of DOE's Office of Nuclear Energy (NE). In light of this growth, the Office of Management and Budget included within the FY2006 budget request a study by the National Academy of Sciences to review the NE research programs and recommend priorities among those programs. The programs to be evaluated were: Nuclear Power 2010 (NP 2010), Generation IV (GEN IV), the Nuclear Hydrogen Initiative (NHI), the Global Nuclear Energy Partnership (GNEP)/Advanced Fuel Cycle Initiative (AFCI), and the Idaho National Laboratory (INL) facilities. This book presents a description and analysis of each program along with specific findings and recommendations. It also provides an assessment of program priorities and oversight.