Get This Book
Visit NAP.edu/10766 to get more information about this book, to buy it in print, or to download it as a free PDF.
« Previous: 4 Genotoxicity and Carcinogenicity
Page 70 Share Cite
Suggested Citation:"5 Assessment of Other Health End Points." National Research Council. 2007. Health Effects of Beryllium Exposure: A Literature Review. Washington, DC: The National Academies Press. doi: 10.17226/12007.
×

5
Assessment of Other Health End Points

As described in Chapter 1, this report addresses the committee’s charge to provide an independent review of the toxicologic, epidemiologic, and other relevant data on beryllium, including carcinogenic and non-carcinogenic effects. The two principal health end points currently of concern in connection with inhaled beryllium, i.e., sensitization that leads to chronic beryllium disease (CBD) and cancer, were discussed in Chapters 3 and 4, respectively. As described in Chapter 3, CBD is primarily a disease of the lungs. Other systemic effects are not common and are usually secondary to CBD or related to extrapulmonary granulomatous lesions. In deriving a reference concentration for beryllium in air based on CBD, the U.S. Environmental Protection Agency (EPA 1998a,b) noted that systemic effects of inhaled beryllium other than those seen with CBD would be expected to occur only after exposure much greater than that at which CBD is observed. The oral reference dose (RfD) derived by EPA (1998a) is based on small-intestine lesions in a long-term study of dogs fed beryllium sulfate. No human studies were identified by EPA that could be used to derive an oral RfD.

This chapter completes the charge for the first report by examining the literature relevant to determining whether inhaled beryllium has systemic health effects other than CBD and cancer that might be critical end points for use in deriving health-based standards. The focus is on studies of reproductive and developmental effects because these are often sensitive end points. Studies of oral and parenteral exposure are also considered in some cases. The following specific questions were formulated to guide the literature review:

Those questions are examined in the following sections. Reproductive and developmental effects of beryllium are considered first and then other potentially relevant health end points.

EPA’s (1998b) review focused on hazard assessment of environmentally relevant doses and concluded that “the potential of beryllium to induce developmental and/or reproductive effects has not been adequately assessed” (p. 50). It should be noted that many of the animal studies may have been conducted at doses that result in maternal toxicity.

The animal studies reviewed include a chronic dog feeding study in which beryllium sulfate was mixed in the diet at three doses (from 0.023 to 1.3 mg/kg per day) and administered to males and females from before mating through weaning of pups (Morgareidge et al. 1976) and two studies previously reviewed by EPA (1991) in which beryllium compounds were administered parenterally to rats (Clary et al. 1975; Mathur et al. 1987). No adverse reproductive or developmental effects were reported in the dog study, and mixed results were reported in the rat studies.

Although neither reproductive nor developmental effects were reported in the chronic dog feeding study (Morgareidge et al. 1976), the design was noted to be nonconventional and to be a reason for low confidence in interpretation of its findings. The same group also conducted a 2-year study in which beryllium sulfate was administered to rats in drinking water (Morgareidge et al. 1975) and reported no effects in reproductive organs. Neither of those studies is reported in the peer-reviewed literature.

ATSDR (2002) also identified a limited number of parenteral studies that reported developmental effects of beryllium in rats and mice. Mathur et al. (1987) exposed pregnant rats by intravenous injection to beryllium nitrate at one-tenth the dose that was lethal to 50% of the animals (that is, the LD50). Normal pups were delivered if the dose was administered on day 1, 12, 13, 15, or 17 after coitus, but all pups died 2-3 days after delivery. If the dose was administered on day 11 after post coitus, all fetuses were resorbed. Day 11 is the day before formation of the placenta but a time when the maternal circulation is supplying nutrients to the fetuses. Thus, beryllium exposure early in pregnancy when blastocysts are supported only by uterine secretions did not interfere with implantation, and exposure later in pregnancy after formation of the placenta did not appear to affect in utero development. Developmental effects occurred in pregnant rats after intratracheal injection of beryllium oxide or beryllium chloride (Selivanova and Savinova 1986), and injecting beryllium salts into pregnant mice reached the fetus and caused developmental abnormalities in offspring (Bencko et al. 1979; Tsujii and Hashishima 1979).

Extrapulmonary effects of beryllium compounds are not common and most often secondary to severe lung disease or related to extra-pulmonary granulomatous lesions in humans. Systemic effects of beryllium are generally observed only at high doses in animals. ATSDR (2002) provides a comprehensive review of both human and animal data. Cardiovascular effects in humans (cor pulmonale) and animals (heart enlargement or increased arterial oxygen tension) were judged to be probably secondary to lung disease. Human case studies did not report significant effects on hematologic measures, but intermediate-duration, high-dose exposures caused anemia in several species. Hepatic effects, other than granulomas in the liver, have not been reported in humans or animals. Kidney stones and increased calcium in blood and urine have been reported in people with CBD, and a cohort mortality study of beryllium workers found an increased risk of death from chronic and unspecified nephritis, renal failure, and other renal sclerosis (Ward et al. 1992). Renal effects in animals were noted by ATSDR (2002) to be minor at sublethal doses. Some adrenal-gland effects have been reported in animals. Neurologic effects have not been noted in humans or animals after inhalation of beryllium.

Studies of reproductive and development effects, as well as other extrapulmonary effects, have generally been observed only at doses higher than the lowest doses that induce CBD or cancer.

Next: References »
Health Effects of Beryllium Exposure: A Literature Review Get This Book
× 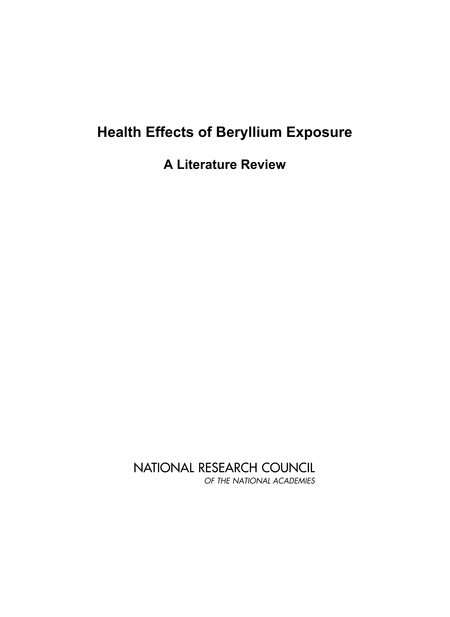 Beryllium is an important metal that is used in a number of industries—including the defense, aerospace, automotive, medical, and electronics industries—because of its exceptional strength, stability, and heat-absorbing capability. It is found in a variety of technologies, including nuclear devices, satellite systems, missile systems, radar systems, bushings and bearings in aircraft and heavy machinery, x-ray machines used for mammography, cellular telephone components, computer components, and connectors for fiber optics. To help determine the steps necessary to protect its workforce from the adverse effects of exposure to beryllium used in military aerospace applications, the U.S. Air Force requested that the National Research Council's Committee on Toxicology (COT) conduct an independent evaluation of the scientific literature on beryllium, provide risk estimates for cancer and noncancer health end points, and make recommendations about specific tests for surveillance and biomonitoring of workers.

The request specified that two reports be produced to accomplish those tasks. The first is to provide a review of the scientific literature on beryllium, and the second will expand more critically on the review in considering the maximum chronic inhalation exposure levels that are unlikely to produce adverse health effects, in estimating carcinogenic risks, and in providing guidance on testing methods for surveillance and monitoring of worker populations and other specific issues detailed in the statement of task. In response to the U.S. Air Force request, COT convened the Committee on Beryllium Alloy Exposures, which prepared this first report. Health Effects of Beryllium Exposure : A Literature Review identifies the available toxicologic, epidemiologic, and other literature on beryllium that is most relevant for addressing the statement of task, focusing primarily on beryllium sensitization, CBD, and cancer.