Get This Book
Visit NAP.edu/10766 to get more information about this book, to buy it in print, or to download it as a free PDF.
« Previous: DISTANCE IS DEAD
Page 14 Share Cite
Suggested Citation:"THE GATHERING STORM." National Academy of Sciences, National Academy of Engineering, and Institute of Medicine. 2007. Is America Falling Off the Flat Earth?. Washington, DC: The National Academies Press. doi: 10.17226/12021.
×

A study was conducted by the National Academies in 2005 that has important implications for all Americans. Titled Rising Above the Gathering Storm: Energizing and Employing America for a Brighter Economic Future, the study was requested, on a bipartisan basis, by Senators Lamar Alexander and Jeff Bingaman, of the Senate Committee on Energy and Natural Resources, later joined by Representatives Sherwood Boehlert and Bart Gordon, of the House Committee on Science and Technology. Its purpose was to examine an issue that was becoming an increasing concern to many Americans: the outlook for our nation’s prosperity. The effort turned out to be particularly timely—or perhaps a bit late. For example, in a recent PriceWaterhouseCoopers poll, 48% of the executives surveyed said they believed that the United States has lost competitive ground in recent years, whereas only 9% believed that the country had moved ahead in this regard.

By way of background, the National Academies is an independent, nonpartisan, not-for-profit, invitational professional organization consisting of three components. The first, the National Academy of Sciences, was created by President Lincoln and chartered by Congress in 1863 with the express purpose of providing advice on public-policy issues involving science. It was later joined by the National Academy of Engineering and the Institute of Medicine, each with a corresponding mission in its own fields of expertise. The Academies currently count 195 Nobel laureates among their membership. Participants in its studies serve pro bono.

The National Academies’ 2005 study of competitiveness involved 20 people and was allotted 90 days for its conduct. The book containing the investigation’s results was 564 pages long and provided a series of findings with supporting data, four overarching recommendations, and 20 highly specific implementing actions.

Members of the Academies’ competitiveness study group included the CEOs or former CEOs of several corporations, including ExxonMobil, DuPont, Intel, Merck, and Lockheed Martin; the presidents or former presidents of several universities, including Yale, Rensselaer, the University of Maryland, Texas A&M, and the Massachusetts Institute of Technology (MIT); three Nobel laureates; a state superintendent of schools; and several former presidential appointees, one of whom has since become secretary of defense.

The committee’s first action was to gather almost 70 subject-matter experts in Washington, DC, for a weekend of discussions. Apropos of the topic, much of the group’s work was conducted via cyberspace. The committee’s final report was anonymously critiqued by 37 reviewers selected by the Academies before its release and ultimately came to be known as the Gathering Storm report—after the first line in its title, Rising Above the Gathering Storm: Energizing and Employing America for a Brighter Economic Future.

The thrust of the Academies’ findings is straightforward. First, the report concludes that individual prosperity depends predominantly on individuals having high-quality jobs. It also observes that the same is true of a nation’s collective prosperity, in that if there are few high-quality jobs, there are not likely to be sufficient tax revenues to ensure homeland security, provide health care, pay Social Security, or educate the nation’s children. Second, the report concludes that the creation of new, high-quality jobs is today disproportionately dependent on advances in science and engineering.

Eight studies conducted in recent decades indicate that public investments in science and technology have produced annualized societal returns that range from 20% to 67%. Some economists estimate that about half the nation’s growth in gross domestic product per capita during the last half-century can be attributed to scientific and engineering achievements. An assessment conducted by the Bank of Boston a decade ago concluded that research performed at MIT alone had resulted in the creation of 1.1 million jobs in 4,000 new companies. Alan Greenspan, then Federal Reserve chairman, cited innovation as the reason for significant gains in productivity growth since 1995 and told Congress: “Had the innovations of recent decades, especially in information technologies, not come to fruition, productivity growth would have continued to languish at the rate of the preceding twenty years.” In recent decades, 60-80% of all newly created jobs have been in small to medium-sized companies (with fewer than 500 employees).

Given the increasing pace of advancement in science and technology—and their close companion, innovation—it seems highly likely that these disciplines will have equal or greater impact in the decades ahead. Some 5 million researchers around the world are now at work in the pursuit of new knowledge. According to the Federal Reserve Bank of

Dallas, each year enough new information (of all types) goes into storage somewhere in the world to equal 37,000 Libraries of Congress. Former President Bill Clinton observed that “where once nations measured their strength by the size of their armies and arsenals, in the world of the future knowledge will matter most.”

The leaders of other nations are unlikely to overlook the ubiquitous impact of investment in science and technology. For example, of China’s top nine leaders, eight are engineers, the other a geologist. In contrast, in the United States, the number of members of the most recent 435-member House of Representatives who listed their field as “engineering” was three, the same number who categorized themselves as “actors or artists.” As for scientists, none was to be found in the Senate, but representation in the House recently ballooned to five.

At last year’s multiday meeting of China’s National Academies of Science and Engineering, China’s President Hu, the prime minister, and all the members of the Politburo were present for most of the meeting. It has been observed that President Hu, who in his address to the gathering referred to China as “an innovation-driven nation,”could have taken most of the actions he proposed directly from the US National Academies’ report. Some years earlier, Deng Xiaoping abruptly dismissed any ideologic debate that might be prompted by China’s commitment to scientific and engineering competition in a free market, noting that “it doesn’t matter if it’s a black cat or a white cat. As long as it can catch mice, it’s a good cat!”

Indeed, in 2006, China announced a 15-year plan—that it termed “medium- to long-term”—for the further development of science and technology. The plan calls for increasing the contribution of science and technology to equal 60% of the country’s overall economic growth by the end of the period. Contrast that approach with that of America’s government, which generally considers “long-term” to mean 5 years, or America’s industry, which too often considers “long-term” to mean anything beyond the next quarter.

But it is not simply America’s economy that depends on the nation’s prowess in science and engineering. In fact, many of the demanding challenges facing the country today will require advances in science and engineering, including challenges in providing health care, supplying energy, protecting the environment, ensuring homeland security, finding and providing water, and maintaining a vibrant economy. Paul Peercy, chair of the Engineering Deans Council of the American Society for Engineering Education, observed, “I used to say ‘Look around, everything except the plants is engineered.’ Now I say, ‘Look around, everything and some of the plants are engineered.’”

Next: AMERICA, WE HAVE A PROBLEM »
Is America Falling Off the Flat Earth? Get This Book
× 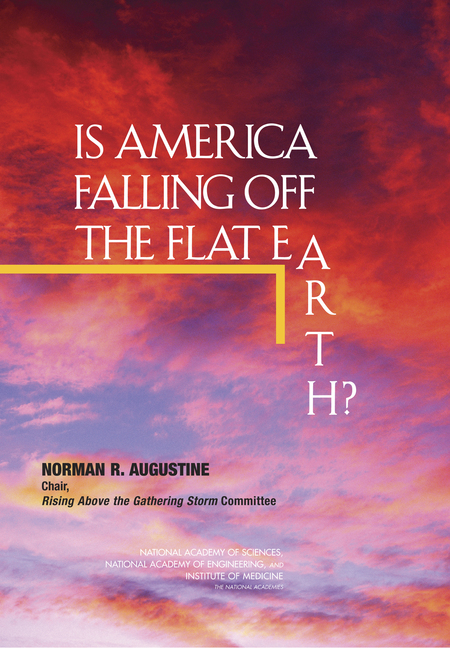 The aviation and telecommunication revolutions have conspired to make distance increasingly irrelevant. An important consequence of this is that US citizens, accustomed to competing with their neighbors for jobs, now must compete with candidates from all around the world. These candidates are numerous, highly motivated, increasingly well educated, and willing to work for a fraction of the compensation traditionally expected by US workers.

If the United States is to offset the latter disadvantage and provide its citizens with the opportunity for high-quality jobs, it will require the nation to excel at innovation--that is, to be first to market new products and services based on new knowledge and the ability to apply that knowledge. This capacity to discover, create and market will continue to be heavily dependent on the nation's prowess in science and technology.

Indicators of trends in these fields are, at best, highly disconcerting. While many factors warrant urgent attention, the two most critical are these: (1) America must repair its failing K-12 educational system, particularly in mathematics and science, in part by providing more teachers qualified to teach those subjects, and (2) the federal government must markedly increase its investment in basic research, that is, in the creation of new knowledge.

Only by providing leading-edge human capital and knowledge capital can America continue to maintain a high standard of living--including providing national security--for its citizens.