Get This Book
Visit NAP.edu/10766 to get more information about this book, to buy it in print, or to download it as a free PDF.
« Previous: Front Matter
Page 1 Share Cite
Suggested Citation:"Summary." National Research Council. 2008. Emergency and Continuous Exposure Guidance Levels for Selected Submarine Contaminants: Volume 2. Washington, DC: The National Academies Press. doi: 10.17226/12032.
×

Submariners live in an enclosed and isolated environment when at sea on a submerged submarine. Unlike workers who have respites from occupational exposures at the end of their shifts or workweeks, submariners are potentially exposed to air contaminants 24 h a day while the submarine is submerged. To protect submariners from potential adverse health effects associated with air contaminants, the U.S. Navy has established 1-h and 24-h emergency exposure guidance levels (EEGLs) and 90-day continuous exposure guidance levels (CEGLs) for a number of those contaminants.

EEGLs are defined as ceiling concentrations (concentrations not to be exceeded) of chemical substances in submarine air that will not cause irreversible harm to crew health or prevent the performance of essential tasks, such as closing a hatch or using a fire extinguisher, during rare emergency situations lasting 1-24 h. Exposures at the EEGLs may induce reversible effects, such as ocular or upper respiratory tract irritation, and are therefore acceptable only in emergencies, when some discomfort must be endured. After 24 h of exposure, the CEGLs would apply. CEGLs are ceiling concentrations designed to prevent immediate or delayed adverse health effects or degradation in crew performance that might result from continuous exposure to chemical substances lasting up to 90 days.

In December 1995, the Navy began reviewing and updating the submarine exposure guidance levels. Because the National Research Council (NRC) Committee on Toxicology (COT) has previously reviewed and provided recommendations for those and other types of exposure guidance levels, the Navy requested that COT review, or when necessary develop, EEGLs and CEGLs for a variety of substances. As a result of the Navy's request, the NRC convened the Committee on Emergency and Continuous Exposure Guidance Levels for Selected Submarine Contaminants in 2002.

Members of the committee were selected for their expertise in inhalation toxicology, neurotoxicology, immunotoxicology, reproductive and developmental toxicology, veterinary pathology, pharmacokinetics, epidemiology, and human-health risk assessment. The committee was specifically asked to accomplish the following tasks:

To accomplish its review, the committee was asked to use the Navy's supporting documentation and other relevant toxicologic and epidemiologic data and publish the results of its evaluations in two reports. This is the committee's second report. It contains the EEGL and CEGL recommendations for the following chemicals of concern to the Navy: ammonia, benzene, DBNP, Freon 12, Freon 114, hydrogen, 2190 oil mist, ozone, surface lead, toluene, and xylene. All other chemicals were addressed in the committee’s first report.

the exposure guidance levels. Secondary references were used to support the estimates derived and the selection of critical end points. Whenever possible, studies that followed accepted standard scientific methods were selected as key studies (studies used to derive the exposure guidance levels). Inhalation-exposure studies were used to derive the EEGL and CEGL values; data on other routes of exposure were considered where appropriate. Human studies were preferred over animal studies. When epidemiologic and human experimental studies were available, preference typically was given to human experimental studies because they were conducted in a controlled laboratory setting and allowed measurement of personal exposure and end points relevant for derivation of exposure guidance levels. The committee recognizes that statistical power of a study involving a small number of subjects needs to be considered. However, the committee did not develop criteria for assessing the adequacy of a study’s statistical power, because individual studies, whether human or animal, were never used in isolation to derive an EEGL or CEGL value. When appropriate human data were not available, standard laboratory animal studies were used, and preference was given to nonhuman-primate studies. A weight-of-evidence approach was used to select key studies and ensure that the selected data were consistent with the overall scientific database.

For derivation of the EEGL and CEGL values, the committee followed basic guidance provided by the NRC report Criteria and Methods for Preparing Emergency Exposure Guidance Level (EEGL), Short-Term Public Emergency Guidance Level (SPEGL), and Continuous Exposure Guidance Level (CEGL) Documents2 but also considered the guidance for developing similar exposure levels provided in more recent NRC reports. The basis of the EEGLs was acute or short-term inhalation and ocular toxicity data, whereas the basis of the CEGLs was repeated inhalation exposure data, and the effects of cumulative exposures were considered for derivation of the CEGL. The most sensitive end points were emphasized for derivation of both exposure levels. The committee considered only health end points relevant to healthy young men on the assumption that no women are serving as permanent crew aboard submarines.

When the key studies, health end points, and exposure levels were identified, the application of uncertainty factors was considered when extrapolating from animals to humans and when extrapolating from lowest observed-adverse-effect levels to no-observed-adverse-effect levels. When necessary, other factors were applied to account for critical data gaps or for potentially relevant variations in susceptibility.

In this report, the committee makes recommendations for 1-h and 24-h EEGLs and 90-day CEGLs for the following chemicals: ammonia, benzene, DBNP, Freon 12, Freon 114, hydrogen, 2190 oil mist, ozone, surface lead, toluene, and xylene. The recommendations are listed in Table S-1, and the Navy’s current and proposed values are included in the table for comparative purposes. The bases of the committee’s derivations are provided in the individual chemical profiles. Overall, the committee found substantial differences in the adequacy of the datasets used to derive the EEGL and CEGL values. Some chemicals, such as benzene and ozone, have robust datasets; others, such as DBNP, have a paucity of data available for determining the effects of inhalation exposure. Specific recommendations for research needed to improve the confidence of the derived exposure levels are provided in the individual chemical profiles.

The committee determined EEGL and CEGL values lower than the current exposure guidelines for hydrogen. The committee’s values are consistent with the approach used by the National Aeronautics and Space Administration to derive its guideline levels and that used by the U.S. Environmental Protection Agency to set exposure standards for explosive gases. All other EEGL and CEGL values determined by the committee are similar to or slightly higher than the values proposed by the Navy.

For two chemicals (DBNP and surface lead), the committee could not recommend exposure guidance levels because data were insufficient. For DBNP, the animal toxicity database available includes only studies of single or repeat doses, primarily by the oral route, that assess a small number of end points. Moreover, many of the data points are conflicting. Thus, much uncertainty is associated with any attempt to estimate EEGL and CEGL values for this compound. The committee recommends that the data gaps be addressed with appropriately designed studies before any further consideration of potential EEGL and CEGL derivation.

For surface lead, no data were available to the committee on the physical nature, chemical identity, routes of exposure, or bioavailability of the lead-containing materials of concern. To conduct submarine-specific lead health risk analyses, data concerning generation, location, dispersion, and extent of onboard lead contamination, including the lead concentration in submarine drinking water, must be available. Available methods for site-specific human health risk assessment for lead-containing dust require rigorous estimates of the quantity of dust ingested daily. It appears unlikely that published estimates of house-dust lead exposure could be applied with confidence to a submarine. In addition, no data were available to the committee concerning submariners’ urinary lead or blood lead. Thus, it is not clear whether a significant exposure of the crew to lead occurs. It is important to establish whether submariner blood lead concentrations differ from those of civilian adults and active military personnel not engaged in submarine operations who live in the United States. The committee

TABLE S-1 Comparison of U.S. Navy’s Current and Proposed Exposure Guidance Levels with Those Recommended by the Committee

highly recommends determining crew urinary lead or blood lead concentrations before submarine deployment and then identical measurements on completion of typical tours of duty. That approach would help to identify any submarine-associated lead exposure. If individual submariners are identified with increased blood lead, determination of the lead sources during deployment or as a result of onshore activity would be necessary.

The committee repeats and re-emphasizes here its research recommendations from its first report. The submarine atmosphere does not appear to be well characterized. For the chemicals reviewed in this report, only Freon 12, Freon 114, and hydrogen are regularly monitored in the submarine atmosphere. Exposure data, if available, on the other chemicals are limited to one-time sampling on a few submarines; whether the reported concentrations are representative of the submarine fleet is not known. Therefore, the committee agrees with the NRC report Submarine Air Quality3 that the Navy should “survey various classes of submarines for trace contaminants and particulate matter” and monitor submarines to “provide [a] complete analysis of submarine air and data on exposure of personnel to contaminants.” If the exposure assessments indicate that chemicals pose problems (that is, if concentrations are higher than 90-day CEGLs), relative source contributions of those chemicals should be determined. The committee notes that a few onboard sources, such as cigarette-smoking and some cooking methods, contribute to the formation of multiple compounds considered in this and its first report. Therefore, stricter management or elimination of those sources is likely to solve some exposure problems on submarines.

The committee did not address exposure to chemical mixtures. The committee recommends that empirical data that characterize mixtures found in submarine air be evaluated when they become available. The potential for antagonistic, additive, or synergistic interactions between contaminants in the submarine environment is subject to substantial uncertainty, remains largely unexamined, and needs to be studied.

As in the committee’s first report, several of the chemicals evaluated in this report are sensory irritants. The derivation of quantitative environmental and occupational exposure limits for sensory irritants is fraught with difficulty because measures of the ocular and respiratory tract irritation experienced by human subjects are often considered subjective. The results of controlled human exposures to many sensory irritants typically use such descriptors as “mild” or “mild to moderate,” and the data on sensory-irritation thresholds can be highly variable. Research is needed to quantify the diverse methods and end points

used in sensory-irritation studies so that the data can be used in public-health and occupational-health risk assessment with greater confidence.

Next: 1 Introduction »
Emergency and Continuous Exposure Guidance Levels for Selected Submarine Contaminants: Volume 2 Get This Book
× 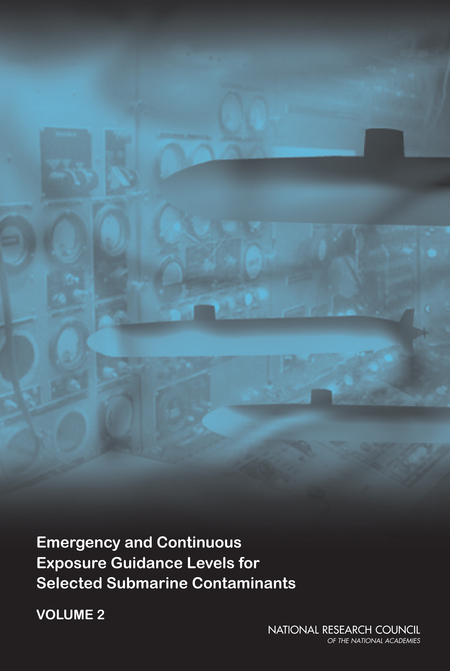