Visit NAP.edu/10766 to get more information about this book, to buy it in print, or to download it as a free PDF.
Page i Share Cite
Suggested Citation:"Front Matter." Institute of Medicine. 2008. Challenges and Successes in Reducing Health Disparities: Workshop Summary. Washington, DC: The National Academies Press. doi: 10.17226/12154.
×

Jennifer A. Cohen, Rapporteur Roundtable on Health Disparities Board on Population Health and Public Health Practice

THE NATIONAL ACADEMIES PRESS â 500 Fifth Street, N.W. â Washington, DC 20001 NOTICE: The project that is the subject of this report was approved by the Governing Board of the National Research Council, whose members are drawn from the councils of the National Academy of Sciences, the National Academy of Engineering, and the Institute of Medicine. This study was supported by multiple contracts and grants between the National Academy of Sciences and the Agency for Healthcare Research and Quality and the Office of Minority Health, U.S. Department of Health and Human Service (Contract HHSP23320042509XI, TO#11); California Endowment (Contract 20052634); California HealthCare Foundation (Contract 06-1213); Commonwealth Fund (Contract 20060048); Connecticut Health Foun- dation (unnumbered grant); Ford Foundation (Contract 1050-0152,FF5H003); Healthcare Georgia Foundation (unnumbered grant); The Henry J. Kaiser Family Foundation (Contract 01-1149-810); Kaiser Permanente (Contract 20072164); Â­Merck (unnumbered grant); Missouri Foundation for Health (Contract 06-0022-HPC); Robert Wood Johnson Foundation (Con- tract 56387); and W. K. Kellogg Foundation (Contract P0123822). Any opinions, findings, conclusions, or recommendations expressed in this publication are those of the author(s) and do not necessarily reflect the view of the organizations or agencies that provided support for this project. International Standard Book Number-13:â 978-0-309-11690-9 International Standard Book Number-10:â 0-309-11690-2 Additional copies of this report are available from the National Academies Press, 500 Fifth Street, N.W., Lockbox 285, Washington, DC 20055; (800) 624-6242 or (202) 334-3313 (in the Washington metropolitan area); Internet, http://www.nap.edu. For more information about the Institute of Medicine, visit the IOM home page at: www. iom.edu. Copyright 2008 by the National Academy of Sciences. All rights reserved. Printed in the United States of America The serpent has been a symbol of long life, healing, and knowledge among almost all cultures and religions since the beginning of recorded history. The serpent adopted as a logotype by the Institute of Medicine is a relief carving from ancient Greece, now held by the Staatliche Museen in Berlin. Suggested citation: IOM (Institute of Medicine). 2008. Challenges and successes in reducing health disparities: Workshop summary. Washington, DC: The National Academies Press.

Reviewers T his report has been reviewed in draft form by individuals chosen for their diverse perspectives and technical expertise, in accordance with procedures approved by the National Research Councilâs Report Review Committee. The purpose of this independent review is to provide candid and critical comments that will assist the institution in making its published report as sound as possible and to ensure that the report meets institutional standards for objectivity, evidence, and responsiveness to the study charge. The review comments and draft manuscript remain confiden- tial to protect the integrity of the deliberative process. We wish to thank the following individuals for their review of this report: Sharon E. Barrett, Association of Clinicians for the Underserved Anne C. Beal, The Commonwealth Fund Howard K. Koh, Harvard School of Public Health Brian D. Smedley, Opportunity Agenda Although the reviewers listed above have provided many constructive comments and suggestions, they were not asked to endorse the final draft of the report before its release. The review of this report was overseen by Dr.Â Melvin Worth. Appointed by the Institute of Medicine, he was respon- sible for making certain that an independent examination of this report was carried out in accordance with institutional procedures and that all review comments were carefully considered. Responsibility for the final content of this report rests entirely with the author and the institution. ix

Preface I n early 2007, the Institute of Medicine of the National Academies con- vened the Roundtable on Health Disparities to increase the Â­ visibility of racial and ethnic health disparities as a national problem, further the development of programs and strategies to reduce disparities, foster the emergence of leadership on this issue, and track promising activities and developments in health care that could lead to dramatically reducing or eliminating disparities. The Roundtable on Health Disparities includes representatives from the health professions, state and local government, foundations, philanthropy, academia, advocacy groups, and community- based organizations. Its mission is to facilitate communication across sectors andâabove allâto generate action. Through national and local activities, the Roundtable strives to advance the goal of eliminating health disparities. On July 31, 2007, the first workshop of the Roundtable on Health Dis- parities was held at Harris-Stowe State University in St. Louis, Missouri. To help stimulate new thinking about solutions and to inform its future meet- ings and discussions, the Roundtable brought together a diverse group of participants from a variety of fields to discuss racial and ethnic differences in life expectancy in the United States. Measured in terms of life expectancy, tens of millions of Americans experience levels of health that are more typical of middle- and low-income developing countries. These mortality differences are caused primarily by chronic diseases and injuries with well- established risk factors and are potentially amenable to intervention. The goals of the workshop were to increase the Roundtableâs understanding of (1) the importance of differences in life expectancy within the United States, xiii

xiv PREFACE (2) the reasons for the differences, and (3) the implications of this informa- tion for programs and policy makers. This workshop provided the Roundtable members and sponsors with an opportunity to hear from a diverse group of people from across the country and to engage in an open dialogue about relevant issues and con- cerns related to reducing health disparities. Workshop participants offered different points of view and shared unique approaches for reducing dispari- ties. While some of the workshop participants work on reducing disparities in health care, others strive to alleviate health disparities by addressing fac- tors that determine a personâs overall health, called the social or nonÂ­medical determinants of health. This workshop provided an open forum during which representatives from these two disparate groups could share their evidence, research, experiences, and knowledge and, together with other workshop attendees, strategize actionable goals, remedies, and solutions for reducing health disparities. Acknowledgments The Roundtable on Health Disparities would like to thank all of the workshop participants for their individual contributions to this workshop. The participantsâ willingness to share their time and expertise helped to inform the attendees and led to frank discussions about disparities in the United States. We would like to thank Drs. Horowitz and Lawlor for collaborating on a background paper that was commissioned by the RoundÂ­table for this workshop. Their paper, âCommunity Approaches to Addressing Health Disparities,â is in Appendix D. We would also like to thank Dr.Â MurrayÂ­ for providing the Roundtable with a copy of his paper âEight Americas: Investigating Disparities Across Races, Â­ Counties, and Race-Â­Counties in the United Statesâ to further clarify the material in his presentation. Dr.Â Murrayâs published paper is in Appendix C. Â­ Presentersâ biosketches and a listing of workshop participants can be found in A Â­ ppendixÂ B. We would also like to extend our appreciation to Dr. Henry Givens, President of Harris-Stowe State University, for hosting the workshop in the Bank of America Theater at Emerson Performance Center on the Harris- Stowe State University Campus. We are also indebted to Dr. James Â­Kimmey, President and Chief Executive Officer of the Missouri Foundation for Health, for sponsoring this workshop and for Dr. Kimmeyâs tireless efforts to ensure that the workshop was a success. Special thanks are also extended to Damon Green from the Missouri Foundation for Health for all of his hard work and exceptional organizational skills. The Roundtable on Health Disparities would also like to thank IOM staff for their ongoing efforts to support the work of the Roundtable.

PREFACE xv S Â­ incere gratitude is extended to Dr. Rose Marie Martinez, the Director of the Board on Population Health and Public Health Practice; Dr. Faith Mitchell, for coordinating and overseeing the formation of the Roundtable and for planning and organizing this workshop; Jennifer Cohen, for her dedication to writing this workshop summary and for her oversight and management of the Roundtable after Faithâs departure; and Thelma Cox, for skillfully overseeing all of the administrative responsibilities. We would also like to acknowledge the work of IOM staff members Christie Bell, Lara Andersen, Tia Carter, and Hope Hare for their ongoing assistance and support. We also gratefully acknowledge the efforts of IOM Anniversary Fellow, Roderick King, for reviewing early drafts of this summary and providing helpful advice. Finally, we would like to thank all the sponsors who make the RoundÂ­ table on Health Disparities a reality. Financial support for this Roundtable was provided by the Agency for Healthcare Research and Quality and the Office of Minority Health, U.S. Department of Health and Human Services; the Â­ California Endowment; the California HealthCare FoundaÂ­ tion; the CommonÂ­wealth Fund; the Connecticut Health Foundation; the Ford Foundation; the Healthcare Georgia Foundation; the Henry J. Kaiser Family Foundation; Kaiser Permanente; Merck; the Â­ Missouri Foundation for Health; the Robert Wood Johnson Foundation; and the W. K. Kellogg Foundation. Dr. Nicole Lurie, Chair Roundtable on Health Disparities

Next: 1 Introduction »
Challenges and Successes in Reducing Health Disparities: Workshop Summary Get This Book
× 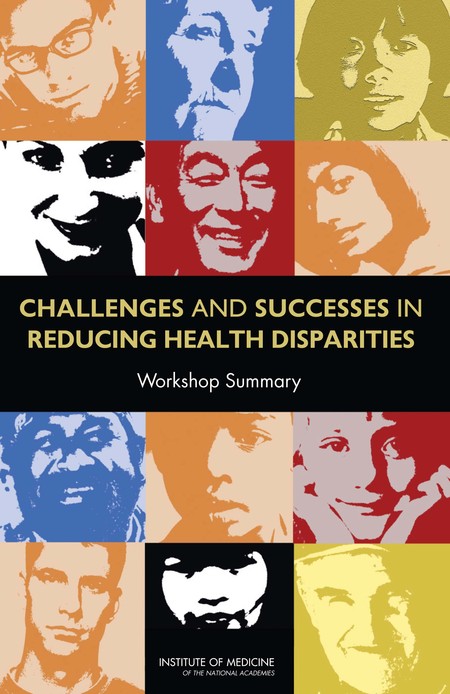 In early 2007, the Institute of Medicine convened the Roundtable on Health Disparities to increase the visibility of racial and ethnic health disparities as a national problem, to further the development of programs and strategies to reduce disparities, to foster the emergence of leadership on this issue, and to track promising activities and developments in health care that could lead to dramatically reducing or eliminating disparities. The Roundtable's first workshop, Challenges and Successes in Reducing Health Disparities, was held in St. Louis, Missouri, on July 31, 2007, and examined (1) the importance of differences in life expectancy within the United States, (2) the reasons for those differences, and (3) the implications of this information for programs and policy makers.