Science and Technology and the Future Development of Societies: International Workshop Proceedings (2008)

Visit NAP.edu/10766 to get more information about this book, to buy it in print, or to download it as a free PDF.
« Previous: SCIENCE AND SOCIETY ISSUES, The Role of Communications and Scientific Thinking--Barbara Schaal
Page 5 Share Cite
Suggested Citation:"Knowledge, Validation, and Transfer: Science, Communication, and Economic Development--John Enderby." National Research Council. 2008. Science and Technology and the Future Development of Societies: International Workshop Proceedings. Washington, DC: The National Academies Press. doi: 10.17226/12185.
×

Knowledge, Validation, and Transfer: Science, Communication, and Economic Development John Enderby Institute of Physics S cience, engineering, technology, and innovation (SET&I) are the bed- rock of a successful economy, particularly as nations are moving toward knowledge-based economies. Communication of SET&I knowledge plays a fundamental role in shaping policy on science-related issues and can be consid- ered a driving force for socioeconomic development. However, effective science communication is not simple. The United Kingdom has experienced its share of challenges in dealing with controversial issues such as genetically modified foods or bovine spongiform encephalopathy and has learned many lessons in attempting to engage the general public with science. Science and technology continue to advance at an increasingly rapid rate, and discussion of the issues that arise from these developments is highly important. SET&I are particularly important for developing countries in order to raise living standards, create wealth, and ensure that their natural resources and bio- diversity are not degraded. They also underpin the majority of the Millennium Development Goals. Developing countries face numerous challenges to develop- ment. There has been extensive land degradation through deforestation and over- cultivation. There exists a scarcity of safe drinking water in numerous countries, and high rates of disease have a profound effect on their economies. Climate change could be a serious obstacle for economic and human development and has the potential to adversely affect gains already made. SET&I have a role to play in addressing these challenges. Communicating the ways in which SET&I will address these issues to all levels of a nationâs society is crucial. We there- fore begin by considering access to validated knowledge generated by primary research papers. 

 SCIENCE AND SOCIETY ISSUES FULL AND FAIR ACCESS TO SCIENTIFIC LITERATURE In developed countries it can be assumed that investigators will have access to the primary literature as both readers and authors. Moreover, such literature will have undergone quality control through the mechanism of peer review. It is becoming increasingly recognized that scientists in developing countries will be placed at a major disadvantage if similar rights do not exist for them. First, in a subject that is rapidly developing, time, money, and effort could be wasted if only yesterdayâs science is available. Second, high-quality work carried out by authors in developing countries should, if the authors so wish, be published in highly cited and read international journals. This two-way exchange of information can only assist the community of scientists worldwide. There have been many business models proposed to accomplish these most laudable aims, and these have been reviewed in the excellent book by John W Â­ illinsky (2005). At one extreme is the author pays/open access model pioneered by the Institute of Physics New Journal of Physics and the U.S.-based Public Library of Science, among others. The advantages of this model are obvious so far as readers are concerned; it is less obvious whether this model is advantageous to authors from developing countries or to authors who have not received research funding. One difficulty is that high-prestige/high-rejection-rate journals need to cover their costs by levy- ing substantial charges on successful authors. Some have suggested that authors should pay part of the fee on submission and the rest on acceptance, but this may lead to increased bureaucracy at the institutional level. At the other extreme is the subscription model in which the reader (or more often the parent institution) pays for access. This model gives advantage to authors because their work can be submitted and assessed free of charge. On the other hand the inexorable rise in subscription rates leads to cancellations and loss of access. The International Network for the Availability of Scientific Pub- lications and the Health InterNetwork Access to Research Initiative (HINARI) are addressing this issue for developing countries with considerable success; an example of the work of HINARI in Kenya can be found in Willinskyâs (2005) Access Principle. Between these two extremes are a variety of hybrid models. It is important, in my personal view, not to become too obsessed with one particular model. Rather, one should explore all possibilities, not least those opened up by the World Wide Web, to ensure the fundamental right for full and fair access, which I define as the opportunity to read research papers and to submit research papers decoupled from the level of economic development.

KNOWLEDGE, VALIDATION, AND TRANSFER  ACCESS TO OVERLOOKED MATERIAL In the debate about open access, patent and gray literature are often over- looked. The free-access Web site http://www.scidev.net provides news, views, and information on issues relating to science, engineering, and technology (SET). As far as innovation is concerned, patent literature is of particular importance. Patents are of course just one example of materials subject to intellectual prop- erty (IP) protection, which includes copyright, trademarks, industrial designs, b Â­ reedersâ rights, and so forth. Again, the situation is developing and the Royal Society (2003) report, Keep- ing Science Open, made several recommendations of relevance to developing countries. For example, it recommended that developing countries should not be required to implement trade-related aspects of intellectual property rights until their state of development is such that the stimulation effect on innovation will be worth the costs and restraints inherent in IP systems. It further recommended that the World Intellectual Property Organization should continue to work with governments to provide guidelines for informed consent and profit sharing that can be translated into practical situations involving the exploitation of traditional knowledge for the benefits of the holders of such knowledge and humankind in general. THE SUPPRESSION OF RESEARCH RESULTS As a general principle the results of research should be in the public domain, even if negative or null conclusions follow (e.g., in drug trials). There may be occasions, however, when the results of research need to be withheld, perhaps for a finite period. Issues relating to national defense and security, law enforcement, or trade secrets could, on limited occasions, be the subject of restrictions; but the presumption must be that scientific research must be open for scrutiny unless cogent and compelling reasons dictate otherwise. SCIENCE AND THE PUBLIC INTEREST Knowledge sharing must increase peopleâs awareness of information devel- oped through science that can help them in their daily lives. It must also be multiÂ­ directional. Engagement in SET&I issues by nonscientists will help to stimulate open dialogue, mutual understanding, and consensus between the scientific and nonscientific communities. Technologies, if harnessed appropriately, could have the potential for countries to make substantial strides in development. Emerging sciences such as nanotechnology, biotechnology, new materials, and informa- tion communication technology will have profound implications for long-term economic growth. It will be important for governments to engage all members of society in the issues surrounding the application of these technologies. Effective

 SCIENCE AND SOCIETY ISSUES science education also has a role in strengthening the science base. All stakeÂ­ holders in the SET enterprise must be sensitive to the concerns of fellow scientists and those of the general public. The Royal Society (2006) has produced a report on good practice in communicating new scientific research to the public. It pro- posed a checklist of some 15 items that could help researchers take into account public interest and to avoid some of the difficulties scientists have had in the past with science deemed controversial by a variety of interested parties. SET AND ITS APPEAL TO YOUNGER PEOPLE If SET are to prosper, and if it is believed, as most countries believe, that they are an important component of economic development, then a good supply of talented individuals going into science is a necessity. In this regard, the Rel- evance of Science Education (ROSE) study is of particular interest. Schreiner and SjÃ¸berg (2004) report fully on the project rationale, development, and logistics. A useful summary can be found in an article by ï¿½ï¿½ï¿½ï¿½ï¿½ï¿½ï¿½ï¿½ï¿½ï¿½ï¿½ï¿½ï¿½ï¿½ï¿½ï¿½ï¿½ï¿½ï¿½ï¿½ï¿½ï¿½ï¿½ï¿½ï¿½ï¿½ï¿½ï¿½ï¿½ï¿½ SjÃ¸berg and Schreiner (2006).ï¿½ There are dramatic differences between students in developed and in developing countries. In developing countries, students have a strong desire to take part in SET. In most developed countries, students are, on average, much less enthusi- astic. Moreover, the gender bias against SET is far more marked in the northern countries of the Organisation for Economic Co-operation and Development than elsewhere. Clearly, this study raises concerns for Europe and the United States, but at the same time is encouraging for countries undergoing economic develop- ment. There are policy implications for both developed and developing counties. In the spirit of this paper, the rich countries of the West have a duty to ensure that scientists from developing countries are not disadvantaged, either by design or by accident, from actions such as unnecessary restrictions on â¢ travel, â¢ the free and full access to validated knowledge, and â¢ the ability to set up appropriate collaborations. Let me finally quote Paul Schlumberger in writing to his son, Conrad, in 1915. He summarizes how the SET community should approach some of the issues raised at this meeting: If the convergence of scientific and commercial viewpoints is too dif- ficult, it is better to opt for the viewpoint of Science. Science is a great force for peace, for the individual as well as for humanity.

Next: The Morality of Exact Sciences--Yousef Sobouti »
Science and Technology and the Future Development of Societies: International Workshop Proceedings Get This Book
× 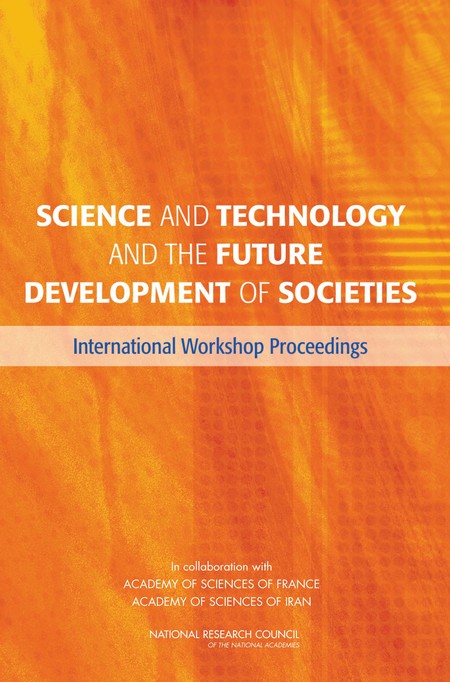 In June 2006, seventeen scientists and educators selected by the National Academies, the Academy of Sciences of Iran, and the Académie des Sciences of France held a workshop at the estate of the Fondation des Treilles in Toutour, France, to discuss issues concerning the role of science in the development of modern societies.

Science and Technology and the Future Development of Societies includes the presentations made at the workshop and summarizes the discussions that followed the presentations. Topics of the workshop included science and society issues, the role of science and engineering in development; obstacles and opportunities in the application of science and technology to development; scientific thinking of decision makers; management and utilization of scientific knowledge; and science, society, and education. This book also provides useful background for the further development of interactions of Western scientists and educators with Iranian specialists.