Changing the Conversation: Messages for Improving Public Understanding of Engineering (2008)

Visit NAP.edu/10766 to get more information about this book, to buy it in print, or to download it as a free PDF.
Page i Share Cite
Suggested Citation:"Front Matter." National Academy of Engineering. 2008. Changing the Conversation: Messages for Improving Public Understanding of Engineering. Washington, DC: The National Academies Press. doi: 10.17226/12187.
×

PREFACE This report is the final product of an 18-month study by the Com- mittee on Public Understanding of Engineering Messages, a group of experts on diverse subjects brought together under the auspices of the National Academy of Engineering (NAE). The committeeâs charge was to identify and test a small number of messages that appear likely to improve the public understanding of engineering. To fulfill that charge, the committee used the services of professional marketing and com- munications firms, hired through a competitive request-for-proposals process. Working with the committee, these firms conducted qualita- tive and quantitative research to collect data and develop messages, themes, and taglines based on that data. This report follows Raising Public Awareness of Engineering, an NAE report published in 2002, which revealed that the engineer- ing community has been spending hundreds of millions of dollars a Â­ nnually to promote the public understanding of engineering with little measurable impact on young people or adults. That studyâs com- mittee concluded that the messages being communicated had not been developed in a systematic way and recommended that more effective, consistent messages be developed and used in a coordinated way by vii

viii Preface organizations interested in enhancing public understanding of the critical role engineers play in todayâs world. Given the concerns in the United States about the importance of STEM (science, technology, engineering, mathematics) education to global competitiveness, national security, and quality of life, the cur- rent report is especially timely. But messaging is about much more than âprimingâ the engineering-education pipeline. The vast majority of Americans will never become engineers, but all Americansâyoung and oldâcan benefit by having a better understanding of the role engineers play in the creation of technologies. Effective messaging can help raise the level of technological literacy in the general population, a key competency for the 21st century. This report will be of special interest to engineering professional societies, technology-intensive industries, colleges of engineering, science and technology centers, and other organizations that commu- nicate with policy makers, Kâ12 teachers and students, and the public at large about engineering. Federal and state agencies concerned with reforming STEM education and supporting research, innovation, and technology development similarly will find that this report can be use- ful in outreach efforts. On behalf of the committee, I urge the engineering community to embrace the very useful information in this document. Don P. Giddens, chair Committee on Public Understanding of Engineering Messages

ACKNOWLEDGMENTS This report has been reviewed, in draft form, by individuals chosen for their diverse perspectives and technical expertise, in accordance with procedures approved by the National Academies. The purpose of this independent review process is to provide candid and critical com- ments to assist the committee and the National Academy of Engineer- ing (NAE) in making its published reports as sound as possible and to ensure that the report meets institutional standards for objectivity, evidence, and responsiveness to the study charge. The reviewersâ com- ments and the draft manuscript remain confidential to protect the integrity of the deliberative process. We wish to thank the following individuals for their reviews of this report: Todd R. Allen, Global University Recruitment Team, Johnson & Johnson Tony Beard, PriceWeber Marketing Communications, Inc. Leslie Collins, National Engineers Week Foundation Eugene M. DeLoatch, School of Engineering, Morgan State University ix

 Acknowledgments Kimberly D. Douglas, Women in Engineering and Science Â­Program, Kansas State University Ioannis Miaoulis, Boston Museum of Science Jon Miller, Department of Political Science, Michigan State University Teri Reed-Rhoads, College of Engineering, Purdue University Betty Shanahan, Society of Women Engineers Lilian Wu, University Relations, IBM Although the reviewers listed above provided many constructive comments and suggestions, they were not asked to endorse the conclu- sions or recommendations and did not see the final draft of the report before its public release. The review was overseen by Robert F. Sproull, Sun Microsystems, Inc., who was appointed by NAE to ensure that an independent examination of this report was carried out in accordance with institutional procedures and that all review comments were care- fully considered. Responsibility for the final content of this report rests entirely with the authoring committee and NAE. In addition to the reviewers, the committee wishes to thank con- sultant Maria Ivancin, Market Research Bureau, who assisted the NAE staff in overseeing the research and provided advice throughout the project. Her input was critical to the success of the study. The committee also thanks the project staff. Maribeth Keitz man- aged the committeeâs logistical and administrative needs, making sure meetings ran efficiently and smoothly. NAE senior editor Carol R. Arenberg substantially improved the readability of the report. Study director Greg Pearson managed the project from start to finish.

Next: Executive Summary »
Changing the Conversation: Messages for Improving Public Understanding of Engineering Get This Book
× 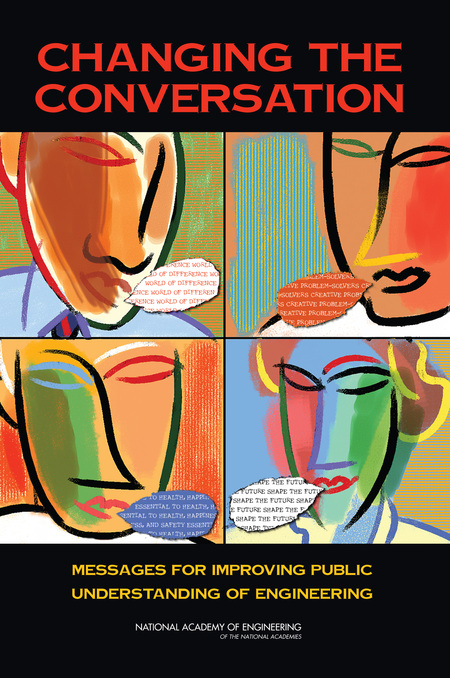 Can the United States continue to lead the world in innovation? The answer may hinge in part on how well the public understands engineering, a key component of the 'innovation engine'. A related concern is how to encourage young people--particularly girls and under-represented minorities--to consider engineering as a career option.

Changing the Conversation provides actionable strategies and market-tested messages for presenting a richer, more positive image of engineering. This book presents and discusses in detail market research about what the public finds most appealing about engineering--as well as what turns the public off.

Changing the Conversation is a vital tool for improving the public image of engineering and outreach efforts related to engineering. It will be used by engineers in professional and academic settings including informal learning environments (such as museums and science centers), engineering schools, national engineering societies, technology-based corporations that support education and other outreach to schools and communities, and federal and state agencies and labs that do or promote engineering, technology, and science.