Visit NAP.edu/10766 to get more information about this book, to buy it in print, or to download it as a free PDF.
Page i Share Cite
Suggested Citation:"Front Matter." National Research Council. 2009. Learning Science in Informal Environments: People, Places, and Pursuits. Washington, DC: The National Academies Press. doi: 10.17226/12190.
×

vii Acknowledgments This report would not have been possible without the important contri- butions of National Research Council (NRC) leadership and staff, and many other organizations. First, we acknowledge the support and sponsorship of the National Sci- ence Foundation (NSF). We particularly thank David Ucko, deputy division director of the Division of Research on Learning in Formal and Informal Settings, whose initial and continuing engagement with the committee sup- ported and encouraged the development of the report. We also acknowledge the contributions of participants in the planning process. In particular, a number of people participated in a planning meeting to define the scope of the study. We thank Alan Friedman, New York Hall of Science for chairing that meeting. We also thank Lynn Dierking and John Falk, Oregon State University; Kathleen McLean, Independent Exhibitions; and Martin Storksdieck, Institute for Learning Innovation, for preparing papers to elicit discussion at the planning meeting. The success of the meeting was largely due to the insights provided by the meeting participants, including Sue Allen, The Exploratorium; Dennis Bartels, TERC; Rick Bonney, Cornell Lab of Ornithology; Kevin Crowley, University of Pittsburgh; Zahava Doering, Smithsonian Institution; Sally Duensing, Kingâs College London; John Durant, at-Bristol; Kirsten Ellenbogen, Science Museum of Minnesota; Patrice Legro, Koshland Museum of Science; Bruce Lewenstein, Cornell University; Mary Ellen Munley, Visitor Studies Association; Wendy Pollock, Association for Science-Technology Centers; Dennis Schatz, Pacific Science Center; Leona Schauble, Vanderbilt University; Marsha Semmel, Institute of Museum and Library Services; Cary I. Sneider, Boston Museum of Science; Elizabeth Stage, Lawrence Hall of Science, University of California, Berkeley; David Ucko,

viii Acknowledgments NSF; and Ellen Wahl, Liberty Science Center. Following the planning meeting Julie Johnson, Science Museum of Minnesota, consulted with the project to help assemble the committee. Over the course of the study, members of the committee benefited from discussion and presentations by the many individuals who participated in our four fact-finding meetings. In particular, our initial framing of the domain of science learning in informal environments underwent significant revisions and refinements as a result of the scholarly and thoughtful contributions made by the background paper writers, presenters, and responders. At our first meeting, Lynn Dierking, Oregon State University, gave an overview of the informal learning field in science, technology, engineering, and math- ematics. Shalom Fisch, MediaKidz Research and Consulting, discussed the effects of educational media. Sheila Grinell, Strategic Designs for Cultural Institutions, spoke about the recent evolution of practice in informal science. George Hein, Lesley University and TERC, discussed the need for the field to be both cautious and bold. Jon Miller, Northwestern University, described a framework for understanding the processes through which children and adults learn about science, technology, and other complex subjects. The second meeting included a diverse set of presenters. Maureen Cal- lanan, University of California, Santa Cruz, described the sociocultural and constructivist theories of learning. Kevin Dunbar, University of Toronto, sum- marized the cognitive and neurocognitive mechanisms of science learning and how they play out in informal environments. Margaret Eisenhart, University of Colorado, Boulder, discussed the aspects of informal learning environments that afford opportunities to underserved or underrepresented populations. Leslie Goodyear, Education Development Center, Inc., and Vera Michalchik, SRI International, presented methods and findings from evaluations of in- formal programs that serve underrepresented or underserved populations. Kris GutiÃ©rrez, University of California, Los Angeles, gave specific examples of how informal learning environments serve diverse populations. Karen Knutson, UPCLOSE, University of Pittsburgh, discussed views of learning sci- ence in informal environments inherent in programs and evaluations. K. Ann Renninger, Swarthmore College, gave an overview of theories of motivation and how they map to learning in informal environments. At the third meeting, the committee heard evidence about the science learning that takes place in various informal venues and pressing policy issues in the field. Bronwyn Bevan, The Exploratorium; Christine Klein, an independent consultant; and Elizabeth Reisner, Policy Study Associates, par- ticipated in a panel discussion of current policy issues in informal learning environments. Deborah Perry, Selinda Research Associates, Inc., described how exhibits and designed spaces are constructed for learning science. Saul Rockman, Rockman Et Al, discussed the evidence of science learning from traditional forms of media. Bonnie Sachatello-Sawyer, Hopa Mountain, Inc., gave an overview of the design and impact of adult science learning programs.

Acknowledgments ix At the fourth meeting, the public session was concerned primarily with the status of the papers prepared to support the committeeâs work and the organizational structure being implemented in NSF as it relates to this project. David Ucko provided an overview of the new organizational structure and focus of the education program offices at NSF. At our final meeting, the committee discussed the planned practitioner volume on science learning in informal environments that the Board on Science Education is developing as a resource for practitioners based on the evidence, findings, and conclusions of this consensus study. Two of the current study members are also members of the oversight group for the practitioner volume: Sue Allen, The Exploratorium, and Gil Noam, Harvard University. The five other members of the practitioner volume oversight group also attended our final meeting: Myles Gordon, consultant; Leslie Rupert Herrenkohl, University of Washington; Natalie Rusk, MIT Media Lab; Bonnie Sachatello-Sawyer; and Dennis Schatz, Pacific Science Center. We are grateful to each member of the group for providing us with excellent feedback. The practitioner volume, sponsored by NSFâs Division of Research on Learning in Formal and Informal Settings, the Institute for Museum and Library Services, and the Burroughs Wellcome Fund, will be released follow- ing publication of this report. We also acknowledge the efforts of the eight authors who prepared background papers. Arthur Bangert and Michael Brody, Montana State University, along with Justin Dillon, Kingâs College London, were asked to review the literature on assessment outcomes. Laura Carstensen and Casey Lindberg, Stanford University, along with Edwin Carstensen, University of Rochester, were asked to synthesize the literature on older adult learning in informal environments. Shirley Brice Heath, Stanford University and Brown University, was asked to describe how issues of diversity influence individual conceptions of science. The Institute for Learning Innovation was asked to review the evidence in evaluation studies of the impact of designed spaces. Bryan McKinley Jones Brayboy, University of Utah, and Angelina E. Castagno, Northern Arizona University, were asked to review and synthesize the literature on native science. K. Ann Renninger, Swarthmore College, was asked to review research on interest and motivation in the context of learn- ing science in informal environments. Rockman Et Al was asked to provide a review of the evidence of the impact of traditional media (e.g., television, radio, print). Sarah Schwartz, Harvard University, was asked to provide a synopsis of the scope and institutional investments in after-school and out- of-school-time programs. Many individuals at the NRC assisted the committee. The study would not have been possible without the efforts and guidance of Jean Moon, Patricia Morison, and Heidi Schweingruber. Each was an active participant in the deliberations of the committee, helping us to focus on our key mes- sages and conclusions. In addition, they made profound contributions to the development of the report through periodic leadership meetings with the

 Acknowledgments committee co-chairs and the NRC staff. We are grateful to Victoria Ward and Kemi Yai, who arranged logistics for our meetings and facilitated the pro- ceedings of the meetings themselves. We would also like to thank Rebecca Krone for assisting with the construction of the reference lists in each chapter of the report. The synthesis of the diverse literatures reviewed in this report would not have been possible without the efforts of Matthew Von Hendy, who conducted multiple literature searches and acquired copies of studies essential to our review. This report has been reviewed in draft form by individuals chosen for their diverse perspectives and technical expertise, in accordance with procedures approved by the Report Review Committee of the NRC. The purpose of this independent review is to provide candid and critical comments that will as- sist the institution in making its published report as sound as possible and to ensure that the report meets institutional standards for objectivity, evidence, and responsiveness to the charge. The review comments and draft manuscript remain confidential to protect the integrity of the deliberative process. We wish to thank the following individuals for their review of this report: David Anderson, Department of Curriculum Studies, University of British Co- lumbia; Bronwyn Bevan, Informal Learning and Schools, The Exploratorium, San Francisco, CA; Ilan Chabay, Public Learning and Understanding of Science (PLUS), University of Gothenburg, Sweden; Lynn D. Dierking, Free-Choice Learning and Department of Science and Mathematics Education, Oregon State University; Shalom Fisch, Office of the President, MediaKidz Research and Consulting, Teaneck, NJ; Shirley Brice Heath, Anthropology and Educa- tion, Stanford University and Department of Education, Brown University; Bonnie L. Kaiser, Office of the Dean of Graduate and Postgraduate Studies, The Rockefeller University; Frank C. Keil, Department of Psychology, Yale University; Leona Schauble, Peabody College, Vanderbilt University; and Cary I. Sneider, Boston Museum of Science, Portland, OR. Although the reviewers listed above provided many constructive com- ments and suggestions, they were not asked to endorse the conclusions and recommendations nor did they see the final draft of the report before its release. The review of this report was overseen by Adam Gamoran, Center for Education Research, University of WisconsinâMadison, and May Berenbaum, Department of Entomology, University of Illinois, UrbanaâChampaign. Appointed by the NRC, they were responsible for making certain that an independent examination of this report was carried out in accordance with institutional procedures and that all review comments were carefully con- sidered. Responsibility for the final content of this report, however, rests entirely with the authoring committee and the institution. Philip Bell and Bruce Lewenstein, Co-chairs Andrew W. Shouse, Senior Program Officer Michael A. Feder, Senior Program Officer

Next: Summary »
Learning Science in Informal Environments: People, Places, and Pursuits Get This Book
× 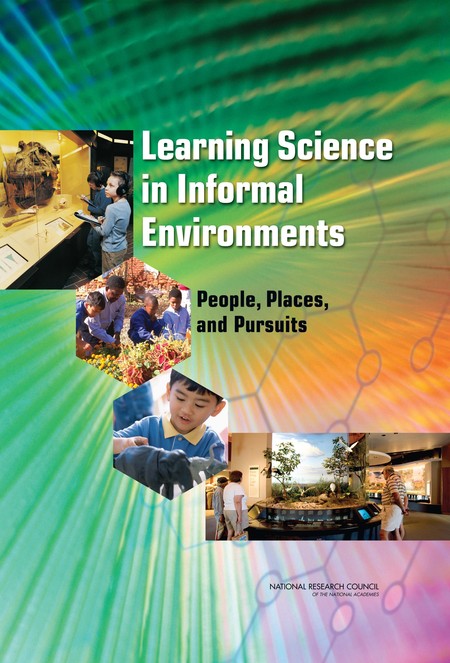 Informal science is a burgeoning field that operates across a broad range of venues and envisages learning outcomes for individuals, schools, families, and society. The evidence base that describes informal science, its promise, and effects is informed by a range of disciplines and perspectives, including field-based research, visitor studies, and psychological and anthropological studies of learning.

Learning Science in Informal Environments draws together disparate literatures, synthesizes the state of knowledge, and articulates a common framework for the next generation of research on learning science in informal environments across a life span. Contributors include recognized experts in a range of disciplines--research and evaluation, exhibit designers, program developers, and educators. They also have experience in a range of settings--museums, after-school programs, science and technology centers, media enterprises, aquariums, zoos, state parks, and botanical gardens.