Get This Book
Visit NAP.edu/10766 to get more information about this book, to buy it in print, or to download it as a free PDF.
« Previous: 24 Diabetes Mellitus
Page 633 Share Cite
Suggested Citation:"25 Hepatobiliary Disease." National Research Council. 1989. Diet and Health: Implications for Reducing Chronic Disease Risk. Washington, DC: The National Academies Press. doi: 10.17226/1222.
×

Hepatobiliary disease includes a heterogeneous group of diseases of the liver and biliary system caused by viral, bacterial, and parasitic infections, neoplasia, toxic chemicals, alcohol consumption, poor nutrition, metabolic disorders, and cardiac failure. The two predominant diseases of the liver in the United States are viral hepatitis and cirrhosis; the predominant chronic disease of the biliary system is cholelithiasis.

Cirrhosis of the Liver

Cirrhosis of the liver is a chronic and usually relentlessly progressive disease characterized by loss of normal liver structure, fibrosis, impairment of the blood supply, and regeneration of disorganized liver lobules. These changes eventually result in liver failure. This disease has ranked among the 10 leading causes of death in the United States since 1950, and in middle-aged adults, it has ranked even higher in some years. In 1983, cirrhosis was the cause of 28,000 deaths, making it the ninth leading cause of death in the United States (Grant et al., 1986).

Cirrhosis may be caused by viral hepatitis, hemochromatosis, obstructive lesions of the biliary system, congestive heart failure, and chronic alcoholism. Specific causes of liver cirrhosis cannot be determined from conventional vital statistics, particularly from mortality statistics based on death certificates, even in technically developed countries. Physicians frequently fail to attribute liver cirrhosis to alcohol because of the social stigma attached to alcoholism. Estimates of the proportion of deaths from cirrhosis due to alcohol consumption in the United States range from 50 to 95% (NIAAA, 1983). In this chapter, it is assumed that most cases of liver cirrhosis are due to alcohol consumption, and rates of prevalence, incidence, and mortality for liver cirrhosis are used as indicators of alcoholic cirrhosis.

Evidence Associating Dietary Factors with Cirrhosis of the Liver

The evidence for alcohol as a cause of cirrhosis derives from more than a century of anecdotal clinical observations made after the disease syndrome was described and named by Laënnec (1819). Further evidence is provided by many clinical and epidemiologic studies and by studies in laboratory animals (see Chapter 16). National mortality rates for liver cirrhosis were closely associated with fluctuations in the availability and consumption of alcohol in several countries before, during, and after World War II (Terris, 1967). The association was so strong and consistent that a causal relationship has been widely accepted. Recent epidemiologic studies have focused on the

social and economic factors that influence alcohol consumption and thus the rates of mortality from cirrhosis. Early stages of alcoholic liver injury are reversible, but advanced stages are usually relentlessly progressive. The only known prevention for alcoholic cirrhosis is to limit consumption of alcohol.

Interactions of Alcohol with Diet

For many years cirrhosis among alcoholics was attributed to nutritional deficiencies associated with alcoholism and not to the direct effects of alcohol on the liver. This belief was based on experiments in animals, principally in rats, in which cirrhosis could be produced by protein deficiency but not by alcohol alone (see Chapter 16) and on the frequent occurrence of nutritional deficiencies among alcoholics. However, more recent experiments have demonstrated that alcohol produces liver toxicity independently of the adverse effects of nutrient deficiencies, and cirrhosis has been reproduced in baboons by alcohol in the absence of nutrient deficiencies (Lieber et al., 1975; Popper and Lieber, 1980; see also Chapter 16).

Evidence Associating Nondietary Factors with Cirrhosis of the Liver

It has long been known that alcoholism clusters in families, and rapidly accumulating evidence indicates that certain genotypes are more susceptible (see Chapters 4 and 16). A number of genetic markers have been associated with chronic alcoholism.

Most of these observations have been concerned with alcoholism and not specifically with cirrhosis. Since the major determinants of the effects of alcohol on tissue are the duration and intensity of exposure to alcohol and its metabolites, the genetic control of susceptibility to cirrhosis is probably associated with the alcohol-metabolizing enzymes of the liver (see Chapter 16). Therefore, both alcoholism and alcoholic cirrhosis are probably the results of genetic-environmental interactions.

There are two major varieties of gallstones: those composed primarily of cholesterol and those composed of heme pigments. Approximately 80% of the gallstones found in the U.S. population are composed of cholesterol. Therefore, the following discussion is limited to those. The prevalence of cholelithiasis in adults in industrialized countries, including the United States, is about 10%; the prevalence among women is about twice that among men (Strom and West, 1985). The prevalence of cholelithiasis is much higher in populations with American Indian ancestry, reaching up to 65% in some American Indian groups (Hesse, 1959). Cholelithiasis and associated cholecystitis are not frequent causes of death, but they are frequent causes of hospital admission and surgical intervention.

The physiological abnormality underlying the formation of gallstones is the accumulation of bile supersaturated with cholesterol. Supersaturation occurs when there is a high rate of cholesterol secretion, a low rate of bile acid secretion, a reduced bile acid pool, and low secretion of phospholipids.

In general, dietary factors in gallstone formation—except for those involved in obesity—have not been conclusively identified. There is conflicting and inconsistent evidence regarding the effects of polyunsaturated fats on bile cholesterol saturation and cholelithiasis (see Chapter 7). In some experiments in humans, very high intakes of polyunsaturated fatty acids increase the cholesterol saturation of bile and increase its lithogenicity. There is no evidence that PUFA intakes of up to 10% of total calories affect the lithogenicity of bile.

Several species of rodents are highly susceptible to the induction of gallstones when fed diets enriched with cholesterol and fats and are thus useful in studying the pathogenesis of gallstones. However, this susceptibility appears to be due to a genetic variation in their ability to metabolize cholesterol and bile salts, and their existence does not establish a causal relationship with dietary fats or cholesterol in humans (see Chapter 7).

The predominant cause of gallstones and their accompanying complications—cholecystitis and bile duct obstruction—appears to be a genetically determined metabolic trait causing some people to secrete lithogenic bile. The strong predisposition to cholelithiasis among American Indians (Hesse, 1959) and people with American Indian ancestry supports the concept of genetic susceptibility. However, no specific genetic marker for this trait has been identified.

Alcoholic cirrhosis and cholesterol gallstones are the major diseases of the liver and biliary system in the United States. Alcoholic cirrhosis results from prolonged and excessive consumption of alcoholic beverages. As with most diet-related diseases, there is a genetic basis for susceptibility both to alcohol abuse and to liver cirrhosis.

Cholesterol gallstones occur in approximately 10% of the U.S. population and are much more frequent among those with admixtures of American Indian blood. They are the major cause of chronic gallbladder disease and are responsible for a substantial number of surgical interventions, particularly in women. The only firmly established nutrition-related condition predisposing to gallstones is obesity, which causes excessive secretion of cholesterol into bile. Experiments in humans and animals suggest that polyunsaturated fat and cholesterol intake may contribute to cholesterol gallstones, but the evidence does not support a causal relationship for these dietary components in the general population. A subset of the population may be genetically susceptible to gallstone formation despite only average intakes of polyunsaturated fats and cholesterol.

· Major efforts are under way at the national level to control the abuse of alcoholic beverages (NIAAA, 1987). Efforts to develop effective educational and treatment regimens for alcohol dependence should be continued. Research aimed at discovering the genetic basis of alcohol dependence is needed for designing more effective alcoholism prevention strategies.

· The genetic-environmental (nutritional) interactions responsible for the formation of gallstones and lithogenic bile are poorly understood. Recent progress in the molecular biology of lipid and lipoprotein metabolism  and in the genetic control of lipid metabolism should provide an opportunity for new studies on these diseases.

Next: 26 Dental Caries »
Diet and Health: Implications for Reducing Chronic Disease Risk Get This Book
× 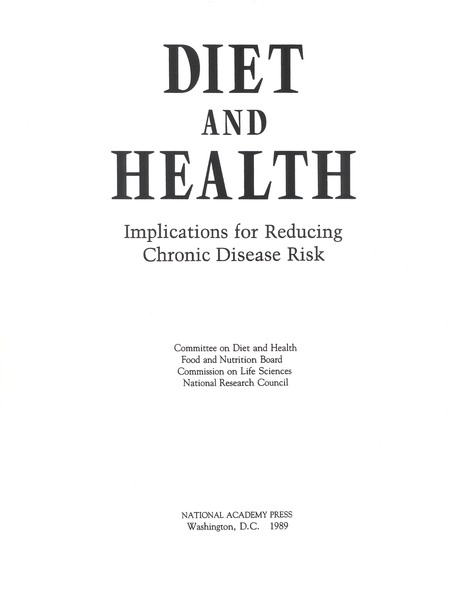 Diet and Health examines the many complex issues concerning diet and its role in increasing or decreasing the risk of chronic disease. It proposes dietary recommendations for reducing the risk of the major diseases and causes of death today: atherosclerotic cardiovascular diseases (including heart attack and stroke), cancer, high blood pressure, obesity, osteoporosis, diabetes mellitus, liver disease, and dental caries.