Visit NAP.edu/10766 to get more information about this book, to buy it in print, or to download it as a free PDF.
Page i Share Cite
Suggested Citation:"Front Matter." National Research Council. 2008. Using the American Community Survey for the National Science Foundation's Science and Engineering Workforce Statistics Programs. Washington, DC: The National Academies Press. doi: 10.17226/12244.
×

THE NATIONAL ACADEMIES PRESSâ 500 Fifth Street, N.W.â Washington, DC 20001 NOTICE: The project that is the subject of this report was approved by the Gov- erning Board of the National Research Council, whose members are drawn from the councils of the National Academy of Sciences, the National Academy of Engi- neering, and the Institute of Medicine. The members of the committee responsible for the report were chosen for their special competences and with regard for appropriate balance. This study was supported by National Science Foundation Award Number SRS- 0632055 to the National Academy of Sciences. Support of the work of the Commit- tee on National Statistics is provided by a consortium of federal agencies through a grant from the National Science Foundation (award number SBR-0453930). Any opinions, findings, conclusions, or recommendations expressed in this publication are those of the author(s) and do not necessarily reflect the views of the organiza- tions or agencies that provided support for the project. International Standard Book Number-13:â 978-0-309-12153-8 International Standard Book Number-10:â 0-309-12153-1 Additional copies of this report are available from the National Academies Press, 500 Fifth Street, N.W., Lockbox 285, Washington, DC 20055; (800) 624-6242 or (202) 334-3313 (in the Washington metropolitan area); Internet, http://www.nap.edu. Printed in the United States of America Copyright 2008 by the National Academy of Sciences. All rights reserved. Suggested citation: National Research Council. (2008). Using the American Com- munity Survey for the National Science Foundationâs Science and Engineering Work- force Statistics Programs. Panel on Assessing the Benefits of the American Com- munity Survey for the NSF Division of Science Resources Statistics, Committee on National Statistics, Division of Behavioral and Social Sciences and Education. Washington, DC: The National Academies Press.

Acknowledgments T his report results from contributions and expertise provided by many individuals. First, I acknowledge and thank my fellow panel members, who offered their time and collective expertise in plan- ning the October 2007 workshop, served as moderators and active par- ticipants during the workshop, and were full partners in writing this report. Staff of the National Science Foundation (NSF) and the Census Bureau were incredibly helpful in assisting the panelâs work and providing the information necessary for our making informed and realistic recommen- dations. The panel is grateful for their helpful presentations at the panelâs two open meetings and their timely responses to the panelâs numerous questions about their programs. In particular, we thank Nirmala Kannankutty, who served as liaison between the panel staff and NSF and contributed very useful presenta- tions on the work of the Division of Science Resources Statistics at NSF. Mary Frase and Stephen Cohen at NSF contributed to the discussions at the panelâs meetings and provided helpful presentations on the NSF man- dates and sample design options. The panel is also indebted to Ron Fecso, who prepared the original analysis of survey design options when he was on the staff of the NSF and continued to assist the panel with advice even after he had moved to the Government Accountability Office. Overall, the panelâs work and the assistance we received from the NSF staff would not have been possible without the invaluable participation of Lynda Carlson, director of the Division. vii

viii ACKNOWLEDGMENTS Susan Schechter, Jennifer Tancreto, and Cheryl Landman from the Census Bureau expertly answered the panelâs questions about the uses of the American Community Survey (ACS) and particular concerns sur- rounding NSFâs and other usersâ needs for information on graduatesâ fields of degree. Ms. Tancretoâs workshop presentation on the testing for the field-of-degree question and the timeline for testing offered the panel an essential framework for its work on the topic. Several users of the Scientists and Engineers Statistical Data System program, including three panel members, offered insight on the varied options for research with these data at the workshop. The panel is grateful for the outside perspective on the important uses of the National Survey of College Graduates data provided by Donna Ginther of the University of Kansas and Sharon Levin of the University of Missouri at St. Louis. In testimony before the panel, Graham Kalton, Westat, who had chaired the National Research Council (NRC) Panel on the Functional- ity and Usability of Data from the American Community Survey, offered a fresh perspective on the design options under discussion and helped guide the panel to consider a broader range of alternatives. The panel acknowledges the excellent work of the staff of the Com- mittee on National Statistics (CNSTAT) and the NRC for support in devel- oping and organizing the workshop and this report. We are especially grateful for the excellent leadership of Tom Plewes, the panelâs study director. Tom used his experience and wise counsel to facilitate com- munication among panel members and between the panel and the NSF staff and to keep the project on schedule. His attention to the needs of the panel was invaluable in the process of producing this report. Tom was ably assisted by Caryn Kuebler of the CNSTAT staff, and Michael Siri of the CNSTAT staff, who provided administrative support. The panel also benefited from the work of Eugenia Grohman of the Division of Behav- ioral and Social Sciences and Education for editing the report. We are especially indebted to Constance F. Citro, CNSTAT director, for her general expertise and for sharing her extensive knowledge of the ACS. Her participation in the panelâs meetings and deliberations benefited the report in numerous ways. This report has been reviewed in draft form by individuals chosen for their diverse perspectives and technical expertise, in accordance with procedures approved by the Report Review Committee of the NRC. The purpose of this independent review is to provide candid and critical com- ments that assist the institution in making its report as sound as possible, and to ensure that the report meets institutional standards for objectivity, evidence, and responsiveness to the study charge. The review comments and draft manuscript remain confidential to protect the integrity of the deliberative process.

ACKNOWLEDGMENTS ix The panel thanks the following individuals for their review of this report: Barbara A. Bailar, consultant, Washington, DC; Richard Freeman, National Bureau of Economic Research, Cambridge, MA; Donna K. Ginther, Economics Department, University of Kansas; James M. Â­Lepkowski, Insti- tute for Social Research, University of Michigan; Sharon Lohr, Depart- ment of Mathematics and Statistics, Arizona State University; Sally C. Morton, Research Triangle Institute, Research Triangle, NC; and Paula E. Stephan, Department of Economics, Andrew Young School of Policy Studies, Â­Georgia State University.Â  Although the reviewers listed above have provided many construc- tive comments and suggestions, they were not asked to endorse the con- clusions or recommendations, nor did they see the final draft of the report before its release. The review of this report was overseen by Richard Kulka, Abt Associates, Durham, NC. Appointed by the NRC, he was responsible for making certain that the independent examination of this report was carried out in accordance with institutional procedures and that all review comments were carefully considered. Responsibility for the final content of the report rests entirely with the authoring committee and the institution. Hal Stern, Chair Panel on Assessing the Benefits of the American Community Survey for the NSF Division of Science Resources Statistics

Next: Executive Summary »
Using the American Community Survey for the National Science Foundation's Science and Engineering Workforce Statistics Programs Get This Book
× 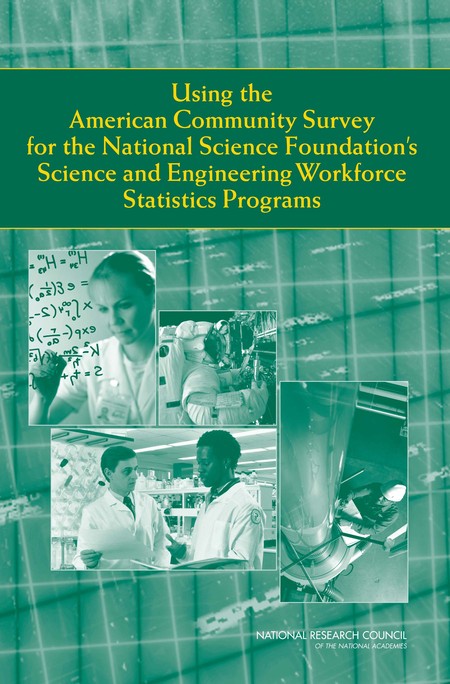 The National Science Foundation (NSF) has long collected information on the number and characteristics of individuals with education or employment in science and engineering and related fields in the United States. An important motivation for this effort is to fulfill a congressional mandate to monitor the status of women and minorities in the science and engineering workforce. Consequently, many statistics are calculated by race or ethnicity, gender, and disability status. For more than 25 years, NSF obtained a sample frame for identifying the target population for information it gathered from the list of respondents to the decennial census long-form who indicated that they had earned a bachelors or higher degree. The probability that an individual was sampled from this list was dependent on both demographic and employment characteristics. But, the source for the sample frame will no longer be available because the census long-form is being replaced as of the 2010 census with the continuous collection of detailed demographic and other information in the new American Community Survey (ACS). At the request of NSF's Science Resources Statistics Division, the Committee on National Statistics of the National Research Council formed a panel to conduct a workshop and study the issues involved in replacing the decennial census long-form sample with a sample from the ACS to serve as the frame for the information the NSF gathers. The workshop had the specific objective of identifying issues for the collection of field of degree information on the ACS with regard to goals, content, statistical methodology, data quality, and data products.