Visit NAP.edu/10766 to get more information about this book, to buy it in print, or to download it as a free PDF.
Page i Share Cite
Suggested Citation:"Front Matter." National Research Council. 2009. Emerging Technologies to Benefit Farmers in Sub-Saharan Africa and South Asia. Washington, DC: The National Academies Press. doi: 10.17226/12455.
×

THE NATIONAL ACADEMIES PRESSâ 500 Fifth Street, N.W.â Washington, DC 20001 NOTICE: The project that is the subject of this report was approved by the Govern- ing Board of the National Research Council, whose members are drawn from the councils of the National Academy of Sciences, the National Academy of Engineer- ing, and the Institute of Medicine. The members of the committee responsible for the report were chosen for their special competences and with regard for appropri- ate balance. This study was supported by a grant from the Bill & Melinda Gates Foundation under Contract 223-01-2460/0031. Any opinions, findings, conclusions, or rec- ommendations expressed in this publication are those of the authors and do not necessarily reflect the views of the organizations or agencies that provided support for the project. International Standard Book Number-13: 978-0-309-12494-2 International Standard Book Number-10: 0-309-12494-8 Additional copies of this report are available from the National Academies Press, 500 Fifth Street, N.W., Lockbox 285, Washington, DC 20055; (800) 624-6242 or (202) 334-3313 (in the Washington metropolitan area); Internet, http://www.nap. edu Cover: African women farmers transplanting rice. Courtesy, International Rice Research Institute. Copyright 2009 by the National Academy of Sciences. All rights reserved. Printed in the United States of America

Preface In 2006, the Bill & Melinda Gates Foundation approached the Na- tional Research Councilâs Board on Agriculture and Natural Resources (BANR) about organizing a study to identify recent scientific knowledge and promising technologies that could transform the production capabili- ties of small-holder farmers in sub-Saharan Africa (SSA) and South Asia (SA). The premise underlying the proposed study was that the historical increase in agricultural productivity in the United States occurred largely through scientific and technological innovations. Crop productivity in SSA and SA lags far behind that in most agricultural areas of the world, but there also has not been a systematic application of science and technology that could improve the situation. The subsistence farming practiced in these regions results in yields and incomes that are unpredictable, leads to environmental degradation, and ultimately leads to a lack of food security. Many of the farmers produce barely enough food to survive, let alone pro- vide a âcash crop.â Identifying ways to improve agricultural productivity in SSA and SA has been the focus of many private, national, and international organiza- tions in recent years, and many publications describe the challenges and opportunities in addressing the factors that constrain agriculture in these regions. Among them is the 2004 publication by the InterAcademy Council, Realizing the Promise and Potential of African Agriculture. That report de- scribes the unique features of African agriculture and the array of farming systems distributed across its agroecological zones and identifies broad sci- ence and technology strategies for increasing crop yields. With those reports in mind, the study committee assembled by the National Research Council vii

viii Preface began its work by querying scientists and agriculturalists at research insti- tutions in Africa and South Asia to learn what they thought were the most serious constraints affecting farmers (see Appendix C). But although the committee believed it important to ground its study in reality, the vision and expectation of the assignment were to take a longer view of the agricultural situation in SSA and SA and to consider science and technology that would bring about dramatic improvements, even if the technology required 10 to 20 years to implement. Indeed, the committee was asked to focus on na- scent innovations, including those that posed high risks, but could also be novel and powerful. In light of that scope, the committee considered basic research projects that could be performed at any location, providing there were an application and a reasonable cost:benefit ratio. The diverse study committee included people with appropriate knowl- edge of science and technology in plant and animal agriculture, many of whom had knowledge of and work experience in SSA and SA. It was important to find the right combination of committee members who knew the agricultural constraints of the regions and the status of cutting-edge agricultural science and technology, but it was not possible to include ex- perts in all the relevant subjects. That was true not only for some aspects of plant and animal agriculture but for a number of topics in nanotechnology, chemistry, physics, and engineering. To try to address that limitation, ex- perts representing diverse fields (economics, global and rural development, metagenomics, cyberinfrastructure, soil science, weed science, livestock reproductive physiology, environmental engineering, agricultural engineer- ing, space-systems technology, nanotechnology systems for monitoring en- vironmental quality, and molecular genetics and genomics) were invited to the first workshop to complement the knowledge and experience of the committee. The interdisciplinary approach proved to be valuable in shap- ing the scope of additional workshops, and the committee is grateful to all those experts (see Appendix D). The workshops covered a wide variety of topics that are described in the report. The severity of the current agricultural situation in SSA and SA and the accompanying social, political, and health consequences made it difficult not to consider the potential benefits of currently available technologies and approaches that could be adapted to help farmers in these regions. Consequently, as we formulated our report, we felt it important to define âemergingâ technologies as both existing technologies that might not yet have been effectively applied to problems in SSA and SA and approaches that will require additional research and technological development before they can be applied. The task required the committee to take on a mindset to be realistic and visionary at the same time. As the committee developed a framework for developing priorities among different research approaches and technological directions, it was struck with the difficulty of establish-

Preface ix ing priorities among them, because improving agricultural productivity requires a systems approach. The committeeâs recommendations ultimately reflect that reality, and include priorities for improving all elements of the production system. The committee believes that its report provides a compressive overview of many current and some future problems that will affect agricultural pro- ductivity in SSA and SA. It was prepared as an independent study funded by the Bill & Melinda Gates Foundation to identify emerging technologies in agriculture that have the potential to improve the quality of life of small- holder farmers in the regions. We hope that a broad range of stakeholders will find the reportâs conclusions and recommendations to be of value in their efforts to improve agriculture and enhance the lives of people living in those regions. On behalf of the committee, I want to express our thanks and ap- preciation to Robin Schoen, director of BANR, for the time and effort she put into assembling the committee, planning the meetings and workshops, and organizing the written report. Those tasks would have been impos- sible without her enduring patience and hard work. We also thank all the BANR study staff for their support and assistance with our meetings and in preparing the final report. Brian A. Larkins, Chair Committee on a Study of Technologies to Benefit Farmers in Africa and South Asia

xii Acknowledgments Although the reviewers listed above have provided many constructive comments and suggestions, they were not asked to endorse the conclu- sions or recommendations, nor did they see the final draft of the report before its release. The review of this report was overseen by Enriqueta C. Bond, Burroughs Wellcome Fund, and R. James Cook, Washington State University (Emeritus). Appointed by the National Research Council, they were responsible for making certain that an independent examination of this report was carried out in accordance with institutional procedures and that all review comments were carefully considered. Responsibility for the final content of this report rests entirely with the authoring committee and the institution.

Next: Executive Summary »
Emerging Technologies to Benefit Farmers in Sub-Saharan Africa and South Asia Get This Book
× 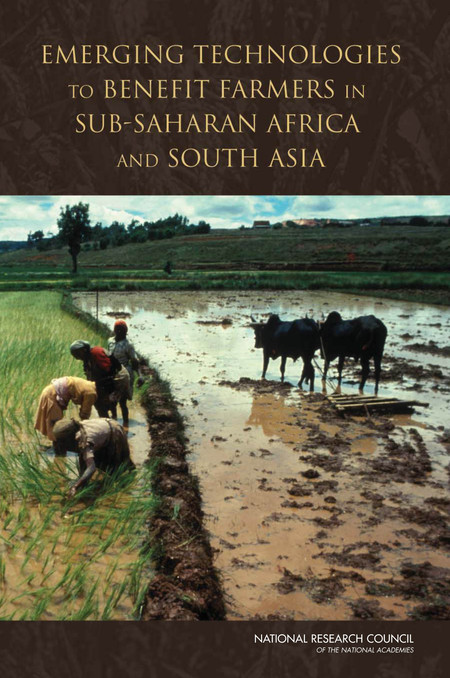 Increased agricultural productivity is a major stepping stone on the path out of poverty in sub-Saharan Africa and South Asia, but farmers there face tremendous challenges improving production. Poor soil, inefficient water use, and a lack of access to plant breeding resources, nutritious animal feed, high quality seed, and fuel and electricity-combined with some of the most extreme environmental conditions on Earth-have made yields in crop and animal production far lower in these regions than world averages.