Get This Book
Visit NAP.edu/10766 to get more information about this book, to buy it in print, or to download it as a free PDF.
« Previous: Kenneth W. Hamming
Page 140 Share Cite
Suggested Citation:"Heinz Heinemann." National Academy of Engineering. 2008. Memorial Tributes: Volume 12. Washington, DC: The National Academies Press. doi: 10.17226/12473.
× 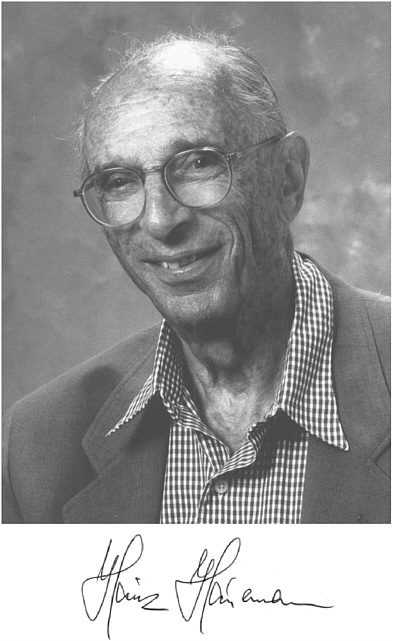 “For conception and development of new petroleum processes and contributions to the advancement of catalysis.”

HEINZ HEINEMANN, a scientist with a long and distinguished career in industry and academia, died of pneumonia at the age of 92 on November 23, 2005. During the last decade of his life, he was distinguished staff scientist, Lawrence Berkeley National Laboratory (LBNL), University of California, Berkeley, working in the Washington, D.C., office of LBNL. Dr. Heinemann was known for his work on catalytic petroleum refining and petrochemical processes. He also worked on coal gasification and coal liquefaction. Not content to stop working in 1978 after a 40-year career in industry, he spent many more years conducting research and lecturing in a university setting.

Born on August 21, 1913, just before the start of World War I, in Berlin, Germany, Heinz was the son of Felix and Edith Heinemann. He spent his youth in Germany, where he attended the University of Berlin and Technische Hochschule, Berlin, in the early 1930s. The Heinemann family asserts that the Nazi regime refused to accept his Ph.D. thesis because he was Jewish, and that, therefore, Heinemann left Germany for Basel, Switzerland, where he received a Ph.D. in physical chemistry from the University of Basel in 1937. He then immigrated to the United States in 1938 and became a U.S. citizen in 1944. Several years later, in 1948, he married Elaine Silverman. The marriage was graced by a daughter, Sue, and a son, Peter. After 46 years

of marriage, Heinz and Elaine Heinemann were parted by Mrs. Heinemann’s death in 1993. Heinz was remarried in 1995 to Dr. Barbara A. Tenenbaum of Washington, D.C.

Heinz arrived in the United States at the tail end of the Great Depression but managed to find work with oil companies in Louisiana and Texas. He was also awarded a postdoctoral fellowship at the Carnegie Institute of Technology, known today as Carnegie Mellon University, where he was involved in research on ethanol produced from sugar cane. According to the Heinemann family, the fellowship was funded by President Rafael Trujillo of the Dominican Republic, where sugar cane was the primary crop. From 1941 to 1948, Heinz worked as a chemist with the Attapulgus Clay Company in Philadelphia, Pennsylvania, where he did research on using bauxite and clays as adsorbents, drying agents, and catalysts.

In 1948, Heinz joined the Houdry Process Corporation in Marcus Hook, Pennsylvania, where he became a key participant in a group at the forefront of research on catalysis in the petroleum industry. Eugene J. Houdry, the man who headed the company, had been the driving force in the 1930s in introducing catalytic cracking in petroleum-refining operations, and the Houdry research group Heinz joined significantly advanced the fundamental understanding of catalytic processes in petroleum refining. In the early 1950s, for example, the group elucidated the bifunctional nature of platinum-on-alumina catalysts, which were being used in the reforming of petroleum naphthas to produce gasoline with improved antiknock properties. Heinz Heinemann was a key figure in this important research, as were several other Houdry scientists, including G.A. Mills, T.H. Milliken, and A.G. Oblad.

The amount of platinum in the reforming catalysts was typically very small, about 0.5 percent by weight, and the surface area of the alumina support was very high, on the order of 200 m2/g. The alumina surface generally contained chloride ions in an amount roughly comparable to the amount of platinum; this was a consequence of using chloroplatinic acid in the preparation of the catalysts. Additional amounts of halide ions (e.g., chloride or fluoride) were sometimes incorporated

This concept of a reforming catalyst with two distinctly different kinds of active sites capable of catalyzing two distinctly different kinds of chemical steps in a reaction sequence was clearly illustrated by the studies of Heinz Heinemann and his fellow scientists. Thus, for example, in the conversion of methylcyclopentane to benzene, metal sites catalyze the dehydrogenation of methylcyclopentane to methyl-cyclopentenes, which subsequently desorb from these sites and readsorb on acidic sites to undergo a rearrangement to cyclohexene. After desorption from the acidic sites, the cyclohexene then adsorbs on metal sites for the final dehydrogenation to benzene prior to desorption of the latter into the gas phase.

Heinz Heinemann’s interests extended beyond catalytic reforming to other processes in petroleum refining. He became known as a key figure in catalysis in the oil industry, as well as in the broader catalysis community. He was a co-founder of the Catalysis Club of Philadelphia, the first of a number of similar groups that appeared across the United States and eventually provided a foundation for the Catalysis Society of North America. Heinz was also instrumental in organizing the International Congress on Catalysis and was president from 1956 to 1960.

From 1957 to 1969, he was director of chemical and engineering research for the M.W. Kellogg Company in New York and from 1969 to 1978 was manager of catalysis research for Mobil Research and Development (R&D) Company in Princeton, New Jersey. During his tenure at Mobil, the

company’s process for converting methanol to gasoline was developed.

After retiring from Mobil at the then-mandatory age of 65 in 1978, Heinz began a long association with LBNL, University of California, Berkeley, which continued for the remainder of his life. From 1978 to 1994, he conducted research on coal gasification, coal liquefaction, hydrodenitrogenation, oxydehydrogenation, methane-oxidative coupling, Fischer-Tropsch synthesis, and nitrogen oxide-emission control; he was also a lecturer in the Department of Chemical Engineering at Berkeley. Heinz collaborated on research projects with a number of faculty members in the departments of chemistry and chemical engineering and was a consultant to chemical and petroleum companies. In 1995, he left Berkeley to work in the Washington, D.C., office of LBNL, where he brought scientists from LBNL each month to give presentations on their work.

Heinz Heinemann gave freely of his time to many activities on behalf of the catalysis community and the chemistry and chemical engineering communities in general. At technical and scientific symposia, he actively participated in the discussion periods following the formal presentations, and his questions and comments always reflected a keen awareness of the issues.

He founded Catalysis Reviews and served as editor of the journal for the first 20 years of its existence. He was also a consulting editor for numerous books in the Chemical Industries Series published by Marcel Dekker Inc. While working at Mobil R&D, he was a member of the Flood Control Commission of Princeton Township and a director of the Princeton Art Association. From 1976 to 1978, he was a member of the New Jersey Governor’s Advisory Council on Research.

Heinz received many honors and awards for his contributions to catalysis, petroleum chemistry, and chemical engineering technology. These included his election to the National Academy of Engineering in 1976 and his selection as honoree of the second Advances in Catalysis Chemistry Symposium held in Salt Lake City, Utah, in 1982. He also received the Industrial and Engineering Chemistry Award of the American Chemical

Dr. Heinemann was a distinguished leader in his field for much of the twentieth century and the first years of the twenty-first century. He will be remembered not only for his very significant contributions to industrial catalysis, but also for his effective role as a senior statesman in the field.

Next: Stanley Hiller, Jr. »
Memorial Tributes: Volume 12 Get This Book
×