Get This Book
Visit NAP.edu/10766 to get more information about this book, to buy it in print, or to download it as a free PDF.
« Previous: Hendrick Kramers
Page 168 Share Cite
Suggested Citation:"Thomas Duane Larson." National Academy of Engineering. 2008. Memorial Tributes: Volume 12. Washington, DC: The National Academies Press. doi: 10.17226/12473.
× 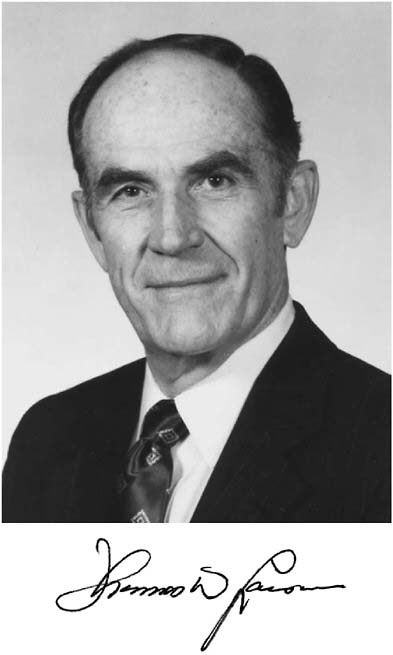 “For outstanding contributions in academic leadership, and for creative research and management accomplishments contributing to the advancement of U.S. transportation.”

THOMAS D. LARSON, educator, administrator of transportation agencies at the state and federal levels, leader in transportation associations, and consultant to the transportation industry, died on July 20, 2006, at the age of 77. Larson was born on September 28, 1928, in Philipsburg, Pennsylvania, and grew up on a farm in nearby Grassflat, Pennsylvania. He received his primary education in Philipsburg and earned his B.S. (1952), M.S. (1959), and Ph.D. (1962) from Pennsylvania State University. He also completed postdoctoral studies at Oklahoma State University (1966) and Massachusetts Institute of Technology (1982).

Dr. Larson began his career as a plant engineer at Bethlehem Steel Corporation in Bethlehem and Steelton, Pennsylvania. From 1954 to 1957, he served in the U.S. Navy Civil Engineers Corps, where he was officer-in-charge of construction at Grand Turk and Nantucket, Rhode Island, and public works officer at Camp Lejune, North Carolina. Also, in 1957, he was a designer in the Flood Control Division of the Pennsylvania Department of Forests and Waters.

From 1957 to 1962, while working on his M.S. and Ph.D., he was an instructor in civil engineering at Penn State. By 1979, he had advanced to the rank of full professor, researcher, and

administrator. He founded and directed the Pennsylvania Transportation Institute at Penn State, which was a source of significant funding for research, mostly on highways and bridges. As a result of this research, Larson published some 100 reports, technical papers, and journal articles, as well as one textbook.

From 1979 to 1987, Dr. Larson was secretary of transportation for the Commonwealth of Pennsylvania under Governor Richard Thornburgh. During that time, he was recognized by the National Governors Association as “Outstanding State Cabinet Official” and was elected a member of the National Academy of Engineering (NAE). He returned to Penn State as a chaired professor in 1987.

In 1989, Dr. Larson retired from Penn State as Pennsylvania Professor Emeritus of government and Management and professor emeritus of civil engineering. On August 10 of that year, he was appointed by President George H.W. Bush as the twelfth administrator of the Federal Highway Administration (FHWA), responsible for the overall management of the organization, including the Federal Highway Aid Program. While at FHWA, he was involved in the development of the Intermodal Surface Transportation Efficiency Act, one of the top items on Bush’s domestic agenda. The measure was signed into law in 1991.

In addition to his regular membership in NAE (1985), he was councillor and a member of the Executive Committee of the NAE Council; a member of the Charles Stark Draper Prize Committee; and a fellow of the National Academies Committee

Dr. Larson lived his personal life with the same energy he exhibited in his professional life. In October 2004, he was thrown from a horse-drawn cart and hit his head on a tree. He was hospitalized and, initially, showed some improvement, but he never fully recovered. He is survived by Esther, his wife of 50 years, and three daughters, Catherine Bisbee, Suzanne Fetter, and Merilee Peery.

Next: Erastus H. Lee »
Memorial Tributes: Volume 12 Get This Book
×