Get This Book
Visit NAP.edu/10766 to get more information about this book, to buy it in print, or to download it as a free PDF.
« Previous: Willis Alfred Adcock
Page 8 Share Cite
Suggested Citation:"Robert Adler." National Academy of Engineering. 2008. Memorial Tributes: Volume 12. Washington, DC: The National Academies Press. doi: 10.17226/12473.
× 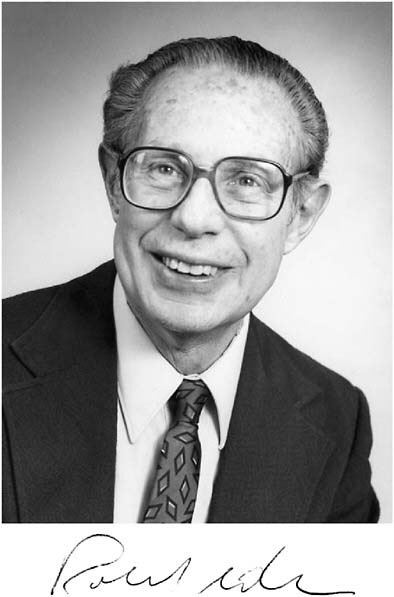 “For development of microwave tubes.”

BY JOHN J. PEDERSON AND JOHN I. TAYLOR

DR. ROBERT ADLER, a prolific inventor and renowned physicist, perhaps best known as creator of the ultrasonic wireless remote control for television, died February 15, 2007, at the age of 93. Elected to the National Academy of Engineering in 1967, Dr. Adler made many scientific contributions to the electronics industry, including landmark inventions in consumer products and sophisticated, specialized communications equipment. His technical achievements and contributions are documented in his nearly 200 U.S. patents, his numerous honors, and his voluminous technical publications.

Although he will be remembered for his technical achievements, Bob Adler’s simple humanity, strength of character, and outstanding leadership skills were his most memorable traits. A gentle, modest, patient, selfless, and soft-spoken man of unimposing appearance and demeanor, he had a comprehensive knowledge of the laws of physics. His avid appetite for reading, coupled with the extraordinary scope of his scientific curiosity, enabled him to assimilate new discoveries and advances almost instantly. He also had outstanding mentoring and teaching skills and a natural talent for finding a middle ground between conflicting hypotheses and points of view.

Bob had a better command of English than most native speakers. In presentations, he had an uncanny intuition about the level of understanding of his audience and an ability to adjust to that level. Even when discussing sophisticated scientific subjects, he never “talked down” to his listeners. In fact, he conversed equally well with colleagues, secretaries, janitors, and chairmen of the board.

Bob was not an ivory-tower scientist. It was important to him that his innovations be manufactured cost-effectively and sold profitably to consumers. Practical to the core, he had a unique ability to see his inventions, and those of his colleagues, through the whole process, from concept to commercial application.

Bob had little patience for administrative tasks and paperwork, which he assigned to an associate research director. Thus he was free to provide full-time oversight and to participate actively in ongoing scientific projects. He was an expert in multitasking long before the computer era. Bob was appreciated as a respected colleague and teacher, not just a department head or boss, by everyone who knew and worked with him.

Born in Vienna, Austria, on December 4, 1913, to Jenny Herzmark Adler, a physician, and Max Adler, Ph.D, a sociologist, Bob received his doctorate in physics at the University of Vienna in 1937, a year before the Anschluss (Hitler’s bloodless coup deposing Chancellor Kurt Schuschnigg and annexing Austria). At the time, the property of Austrian Jewish citizens was summarily expropriated, and Jews were stripped of their civil rights. To avoid persecution, Bob fled to Belgium in 1939. From there he went to England and, in 1941, to the United States, where he was discovered by top engineering executives of Zenith Radio Corporation. He began a six-decade-long career with Zenith when he joined the research division in Chicago in 1941.

When the United States entered World War II, Zenith focused all of its production on supporting the war effort. However, Bob had not yet become a U.S. citizen and was

technically considered a German national, so he did not qualify for security clearance for classified materials. Zenith management set him up in an isolated lab facility and gave him carte blanche to work on unclassified projects of his own design for the duration of the war.

Bob’s pioneering developments spanned the decades from the Golden Age of television to the era of high-definition TV. Bob was named associate director of Zenith in 1952, vice president in 1959, and vice president and director of research in 1963. He retired as research vice president in 1979 and served as a technical consultant to the company until 1999, when Zenith merged with LG Electronics. Bob’s inventions found their way into Zenith products, as well as the products of his post-Zenith clients and, from time to time, the products of competitors. Bob Adler was a vital part of Zenith’s lifeblood during the company’s glory years.

Bob’s early work included the development of the gatedbeam tube, which, at the time, represented an entirely new concept in vacuum tubes. This invention greatly simplified the sound system and improved reception in television receivers by screening out certain types of interference. At the same time, it lowered the cost of the sound channel. Bob was also instrumental in originating and developing Zenith’s “fringe lock” synchronizing circuit, which improved stability in fringe areas of television reception. This invention was widely used for many years, and its principles are still used in many fields, from home entertainment to space exploration.

The electron-beam parametric amplifier, developed in 1958 by Zenith’s Bob Adler and Glen Wade, then of Stanford University, was the most sensitive practical amplifier for ultra-high-frequency (UHF) signals at that time. The device was used by radio astronomers in the United States and abroad and by the U.S. Air Force for long-range missile detection.

Bob’s original work in the field of acousto-optical interaction was instrumental in the 1966 public demonstration, by a team of Zenith engineers, of an experimental television display

using ultrasonic deflection and modulation of a laser beam to produce a giant TV picture on a wall without a cathode ray tube. In addition, his early work on electromechanical filters paved the way for the development of the highly compact filters widely used in aircraft receivers after World War II. In the mid-1960s, he pioneered the use of surface acoustic waves (SAWs) in intermediate-frequency filters for color television sets, a technology that has since become universal, not only in televisions, but also in cellular telephone handsets.

By 1978, the U.S. home electronics industry had to be restructured to meet competition from foreign imports. Rather than preside over the downsizing of Zenith’s research operations, Bob resigned, at the age of 65, but he continued to be a technical consultant for Zenith, EloTouch Systems (now Tyco Electronics), and others for the next quarter century. Bob pioneered the use of SAW technology for touch screens, which are now widely used in airport kiosks and museums.

Accolades, Honors, Emmys, and the Hall of Fame

Bob Adler is widely recognized in the consumer electronics field as the inventor of Zenith’s wireless “Space Command” ultrasonic remote control for TV sets, which was introduced in 1956 and revolutionized TV viewing worldwide. He received the 1958 Outstanding Technical Achievement Award of the Institute of Radio Engineers (now the Institute of Electrical and Electronics Engineers [IEEE]) for his “original work on ultrasonic remote controls” for television. He had been a fellow of IEEE since 1951, a professional honor conferred by the IEEE board of directors for “eminence and distinguished service.” Bob was cited for “developments of transmission and detection devices for frequency-modulated signals and of electromechanical filter systems.”

In 1967, Bob was the recipient of the first Inventor-of-the-Year Award from George Washington University’s Patent, Trademark, and Copyright Research Institute for his inventions of electronic products, devices, and systems used in aircraft communications, radar, TV receivers, and FM broadcasting. In 1970, IEEE honored him with the Consumer Electronics Outstanding Achievement Award, which is given annually to an engineer who has contributed significantly to the advancement of consumer electronics through engineering.

In 1974, Bob received the IEEE Outstanding Technical Paper Award for “An Optical Video Disc Player,” a report on his early work on what became the digital video disc, or DVD. IEEE also awarded him the Edison Medal, its principal annual award presented for a career of meritorious achievement in electrical science, electrical engineering, or electrical arts. In 1981, he received the IEEE Sonics and Ultrasonics Achievement Award.

With Zenith colleague Eugene Polley, Bob Adler was honored in 1997 by the National Academy of Television Arts and Sciences with an Emmy Award for his pioneering work on wireless TV remote control. He was a charter inductee in the Consumer Electronics Hall of Fame in 2000, the same year he was inducted into the Television Academy’s Emmy Silver Circle.

Bob had a pervasive love and appreciation for the natural wonders of the world and the universe. He was a devotee of the fine arts, a cat lover, and a private pilot. For decades he was active in the Chicago cultural community, including the Art Institute of Chicago, the Chicago Symphony Orchestra, Music of Baroque, and community theater. He was as passionate about hiking and skiing as he was about science and the arts. At the age of 89, he was still an avid downhill skier and enjoyed hiking with his wife. A world traveler for both pleasure and business, Bob was fluent in German, English, and French (he was an active participant in a Chicago-area French club for 35 years).

In preparation for technical conferences abroad, he studied

other languages, specifically Russian and Japanese, so he could communicate with featured speakers in their native tongues and react to comments and questions from the floor. In 1969, for example, when he arrived in Moscow as a member of the IEEE delegation to the Popov Society meeting, he had taught himself Russian so that, as a goodwill gesture, he could present his paper in that language.

Technology, of course, was his passion, and he was still inventing in his 90s. Thirty-nine of his 200 U.S. patents were granted during the twilight phase of his career. The U.S. Patent and Trademark Office published his latest patent application, for advances in touch-screen technology, in early February 2007, just days before he died.

Dr. Robert Adler will long be remembered for the scope of his scientific vision, his modest and gentle manner, his extraordinary patience and communication skills, and his contributions to the advancement of technology.

He is survived by his wife, Ingrid Adler (nee Koch).

John J. Pederson worked with Bob Adler beginning in 1947 when Mr. Pederson joined Zenith as patent solicitor. He was manager of Zenith’s Patent Department in 1952, was named general patent counsel and director of patents in 1972, and was elected vice president, patents and consumer affairs, in 1981. He has been active in volunteer executive counseling for 10 years following his 1991 retirement from Zenith.

Next: Rutherford Aris »
Memorial Tributes: Volume 12 Get This Book
×