Get This Book
Visit NAP.edu/10766 to get more information about this book, to buy it in print, or to download it as a free PDF.
« Previous: Thomas Duane Larson
Page 172 Share Cite
Suggested Citation:"Erastus H. Lee." National Academy of Engineering. 2008. Memorial Tributes: Volume 12. Washington, DC: The National Academies Press. doi: 10.17226/12473.
× 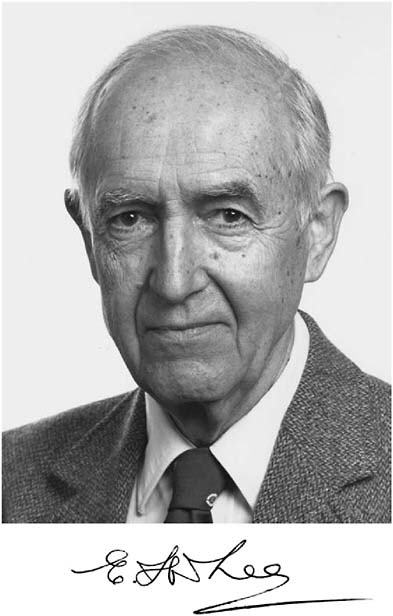 “For contributions to advances in mechanics and their application to rocket engine and nuclear power plant design.”

ERASTUS LEE, Rosalind and John Redfem Jr. Chair Emeritus of Engineering, Rensselaer Polytechnic Institute (RPI), died on May 17, 2006, at the age of 90. He was with Rensselaer for 10 very productive years, from 1981 to 1991; prior to that, Ras, as he was known to friends and colleagues, was professor emeritus, Division of Applied Mechanics and Department of Aeronautics and Astronautics, Stanford University, where he had been active for 20 years.

Ras was born on February 2, 1916, in Southport, England, to Herbert J. and Emma Cook Lee. A recipient of several scholarships, Ras graduated in 1937 with 1st Class Honors from the University of Cambridge, where he majored in mechanical sciences and mathematics. He came to the United States for the first time on a two-year fellowship from the Commonwealth Fund of New York to study with Professor S.P. Timoshenko, a renowned professor at Stanford University. Ras earned his Ph.D. in mechanical engineering and mathematics from Stanford in 1940.

Ras remained in the United States during World War II, first as a progress officer in the British Purchasing Commission in New York City and later in the British Air Commission in Washington, D.C. Officer Lee was involved in planning deliveries of aircraft from U.S. companies and keeping records of modifications required to meet British needs.

In 1941, Ras and his bride, Shirley Wilson, whom he met at Stanford, decided to return to England, whereupon he worked at the Ordnance Board and later in the Armament Research Department. In 1944, he was elected a fellow of his College at Cambridge, Gonville and Caius, and in 1945, he received an M.A. from Cambridge. By this time he was contemplating an academic career but decided he should have some experience in engineering practice first. In 1946, he was offered the position of assistant director in charge of the Technical Section, Production Department in the newly established Department of Atomic Energy, where he was involved in the initial designs for the British atomic energy program. However, the next phase—power production—would have taken another five years, so Ras decided it was time to begin his academic career in earnest. He returned to the United State for the second time in 1948 to take up a permanent position as associate professor at Brown University. He remained at Brown until 1962, when he accepted a position at Stanford.

During World War II, the U.S. Navy was keenly interested in impact deformation and the penetration mechanics of projectiles. The Office of Naval Research (ONR) brought a world authority on plasticity, Professor William Prager, to Brown University to conduct research and provided substantial financial support for the establishment of the Graduate Division of Applied Mathematics; Ras was recruited as an associate professor. Soon he was promoted to professor and later elected chairman of the division, a position he held for five years.

In time, several generations of graduate students were brought into the field of plasticity (the study of the consequences of loading materials beyond their elastic range), and these students gradually spread to other leading universities. The year of Ras’s retirement from Stanford, his former students and colleagues presented him with a commemorative volume, Topics in Plasticity, edited by Wei H. Yang (AM Press, Ann Arbor, Michigan), that includes articles and encomiums describing Ras’s path-finding contributions in mechanics and engineering science.

Ras was elected to the National Academy of Engineering in 1975, “for contributions to advances in mechanics and their application to rocket engine and nuclear power plant design.” He was a fellow of the American Academy of Mechanics, a life fellow of the American Society of Mechanical Engineers, a John Simon Guggenheim Memorial Fellow, recipient of an Alexander von Humboldt Senior Scientist Award, and a Timoshenko Medalist of the American Society of Mechanical Engineers. This medal, awarded for outstanding contributions in applied mechanics, was named after his professor and mentor of 40 years before!

Despite his brilliance, Ras was always a modest gentleman who willingly served in technical, scientific, or social capacities, but seldom talked about his accomplishments. In fact, he came very close to not having the opportunity to pursue his desires at all. In pre-World War II England, after elementary school, children had to take a scholarship examination for entrance to secondary school, and headmasters had the authority to keep them from taking the examination. Ras’s older brother had been denied permission because of the humble status of the family, and the headmaster had suggested that he become a bricklayer. With the future of his three children at stake, Ras’s father demanded that his children be allowed to take the examination. As it turned out, all three passed their respective examinations. Ras entered King George V School, the local secondary school, in 1927 and went on from there to the University of Cambridge and a brilliant career.

Ras was predeceased by his wife, Shirley Wilson Lee, and is survived by four children: Michael Lee of Providence, Rhode Island; Martin Lee of Durham, New Hampshire; Margaret Lee of Mill Valley, California; and Susan Greenleaf of Peacham, Vermont. He is also survived by four grandchildren.

Addition by the Family:

In 1990–1991 Ras (my Dad) began to experience lapses in his memory. Although these were simply puzzling at first, they signaled the onset of Alzheimer’s disease. The initial forgetfulness turned into difficulties performing mathematical

calculations. He forgot much about his life in America and eventually even lost his ability to clearly recognize family members. After Mum’s death in 2002, Dad came to live with my wife and me from January 2003 until February 2006, when he entered a nursing home. Once we learned the art of care giving, these years were the most rewarding of my life. Remarkably, his personality remained essentially unchanged by Alzheimer’s disease. He remained gentle, reasonable, optimistic, and helpful, and he always loved to eat.

In spite of the ravages of Alzheimer’s, Dad never forgot three early mentors. Edgar Brining “Boss” Hewlett was Dad’s scoutmaster, who led his charges on camping expeditions to the Lake District and North Wales, and instilled in Dad a love of hiking, camping, and the outdoors. Boss was also ahead of his time in warning his scouts about the dangers of smoking and drinking. Dad always attributed his longevity to Boss’s advice on smoking. George Millward, headmaster of King George V, had been a keen student at Caius College, Cambridge, and he loved mathematics, physics, and science in general. He instilled his passion in a small select group of boys including Dad and one lone girl, who had to suffer the embarrassment of walking over to class from the girls’ school. Finally, Stephen “Timmie” Timoshenko was Dad’s Ph.D. supervisor during an eventful two years at Stanford when Dad met my mother, shared an apartment with Nick Hoff, skied in the Sierras, drove around the U.S. in the summer of 1939 with another commonwealth fellow, and, according to family legend, in the final month of his stay at Stanford wrote his thesis entitled “The behavior of a mass striking a beam.”

In his years with us Dad had lost all his memories of the 43 years as a professor at Brown, Stanford, and Rensselaer. In order to prompt what was left of his memory we constructed a “memory wall” in the dining room with pictures of Dad throughout his life, with fellow scouts, with family, with colleagues, and while lecturing. We always tried to remind him of who he had been: He was a teacher loved by his many graduate students. He was a prized colleague, who was always collegial. He was an outstanding researcher on the behavior of

materials under stress. Dad was a caring father, who followed silently 10 feet behind me on my first trip by public bus to school (to make sure I arrived safely), who took his children on hikes, and who coached me on multivariable calculus when I resumed my studies in mathematics and physics after a one-year hiatus at Stanford-in-Germany. He was a devoted husband who supported my Mum’s many passions and idealism. He would use a clothespin to replace a lost button on his coat, and his desk at Stanford was piled so high with papers that he had to work on the pullout shelf. But he could always find an important paper in one of the piles. As long as he had clothespins to keep himself together, Dad did not need the material trappings of life such as stylish clothes, fine meals and accommodations, hobbies, or indulgences of any sort. He did not covet awards and prizes, and yet many were bestowed upon him. He found great satisfaction in his profession, his family, and his daily walk, and for him, this was enough.

Next: Joseph T. Ling »
Memorial Tributes: Volume 12 Get This Book
×