Get This Book
Visit NAP.edu/10766 to get more information about this book, to buy it in print, or to download it as a free PDF.
« Previous: Robert Adler
Page 16 Share Cite
Suggested Citation:"Rutherford Aris." National Academy of Engineering. 2008. Memorial Tributes: Volume 12. Washington, DC: The National Academies Press. doi: 10.17226/12473.
× 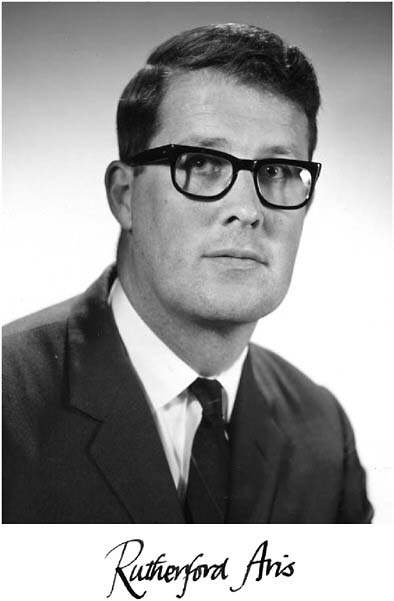 “For contributions to the literature of chemical engineering on control theory and optimization and on the theory of reaction and diffusion.”

RUTHERFORD ARIS, regents professor emeritus of chemical engineering and classics at the University of Minnesota, died on November 2, 2005, after a long and distinguished career. Aris was born in Bournemouth, England, on September 15, 1929 to parents Algernon and Janet Aris. He had all his formal education in Great Britain. Aris completed a first-class honors B.Sc. degree in mathematics, with a minor in physics, at the University of London at the age of 16. However, the university did not think it proper to award a degree to someone so young, requiring him to wait until 1948, when he was 19, to receive the degree. Meanwhile, he worked in industry at Imperial Chemical Industries (ICI) Ltd. as a laboratory assistant from 1946 to 1948. From 1948 to 1950 he pursued postgraduate studies at the University of Edinburgh, supported by ICI, and rejoined ICI as a technical officer during 1950–1955. At the invitation of Neal Amundson, Aris spent the year 1955–1956 at the University of Minnesota as a research fellow. He returned to England and was a lecturer in technical mathematics at Edinburgh University in the period 1956–1958. In 1958 he was invited to join the Chemical Engineering Department at Minnesota as an assistant professor even though he had no Ph.D. degree. At the same time he became an external Ph.D. student at the University of London and completed his Ph.D. in mathematics and chemical

engineering in 1960. In 1961, Aris’ Ph.D. thesis, “The Optimal Design of Chemical Reactors,” was published as a monograph by Academic Press and was so popular that it appeared also in Japanese, Russian, and Czech. In 1964, the University of London also awarded him the D.Sc. degree. Aris had a long and distinguished career at Minnesota, becoming a full professor in 1963 and receiving a regents professorship in 1978. He served as chairman of the Chemical Engineering Department from 1974 to 1978. Aris retired in 1996 and remained active as a regents professor emeritus until 2005.

Aris had an enormous impact on the field of chemical engineering through his publications (13 books and more than 300 research articles), teaching and advising (he received prestigious teaching awards and mentored more than 65 master’s and Ph.D. students), and his influence on the directions of the profession. Among Rutherford Aris’s most important technical contributions are his detailed explanations for sudden temperature runaways and oscillating behavior of processes involving chemical reactions. His work in this area led to better design and control of potentially explosive chemical processes and safer industrial operations. From the beginning of his career, he led the way in developing new mathematical techniques for optimizing and controlling chemical manufacturing processes and teaching these new methods to engineering students and industrial practitioners. His work on chemical kinetics and

chemical reactor design provided a deeper understanding of observed phenomena and allowed much improved design of chemical processes. Today we have safer, more cost-effective, and more energy-efficient industrial manufacturing because of Aris’s discoveries, teaching, and influence on his field.

In the latter part of his career, Aris also pursued his deep interest in paleography (ancient manuscripts) by taking a part-time appointment in the Classics Department where he taught students and published research articles. In this field he also published two monographs: “Index of Scripts in E. A. Lowe’s ‘Codices Latini Antiquores’ Pts. I-XI & Supp.” in 1982 and “Explicatio Formarum Litterarum. The Unfolding of Letterforms” in 1990.

Aris’s professional contributions have been recognized by numerous honors and awards. Among these are more than 20 distinguished lectureships from universities in the U.S. and Europe and a large number of prestigious awards from engineering and scientific societies here and abroad. These include awards from the British Institution of Chemical Engineers, the German DECHEMA, the American Automatic Control Council, the International Symposium on Chemical Reaction Engineering, and the American Institute of Chemical Engineers (Alpha Chi Sigma, Wilhelm, W. K. Lewis, and Founders’ awards). Aris was elected to the National Academy of Engineering in 1975 and to the American Academy of Arts and Sciences in 1988.

Rutherford Aris had a wonderful sense of humor and enjoyed pranks. Some time after he was listed in “Who’s Who,” the publisher began sending him a second questionnaire to complete under the name Aris Rutherford. Even after repeated letters to the publisher stating that there was no such person, the questionnaires kept coming. So Aris completed the questionnaire for this fictitious person in his wonderful style. Aris Macpherson Rutherford was listed as a colorful professor of distillation who had trained at the Strath Spey and Glenlivit Institute of Distillation. Among his publications were books entitled “Sampling Techniques” and “American Football–A Guide for Interested Scots.” After the newspapers were alerted

to this entry in “Who’s Who,” the prank was uncovered.

Having a remarkable facility with language, Rutherford Aris once published a technical paper written entirely in Latin, and throughout his life he wrote delightful poetry providing enjoyment for friends and colleagues. For more than 25 years Aris composed clever and hilarious poems to “roast” each year’s Lacey Lecturer at Caltech. As a result of his intense interest in medieval manuscripts, he became a superb calligrapher who encouraged this art in others. In 1964, Aris founded a series of departmental seminars having eclectic themes from all fields in order to further an appreciation of the arts in his engineering students and colleagues. This popular seminar series continues today with financial support from alumni.

A devout Christian, Rutherford Aris was an exemplary gentleman and scholar who stimulated the best professional and personal qualities in his students and colleagues. His former students have attained high positions in industry and distinguished professorships at leading universities in this country and abroad, but Aris’s values of high moral and ethical standards and his practice of helping others are the most important lessons he taught.

Next: Stanley Backer »
Memorial Tributes: Volume 12 Get This Book
×