Get This Book
Visit NAP.edu/10766 to get more information about this book, to buy it in print, or to download it as a free PDF.
« Previous: Frederic C.E. Oder
Page 234 Share Cite
Suggested Citation:"Ronald Samuel Rivlin." National Academy of Engineering. 2008. Memorial Tributes: Volume 12. Washington, DC: The National Academies Press. doi: 10.17226/12473.
× 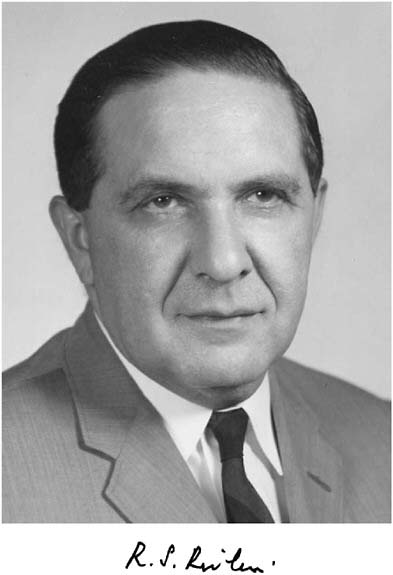 “For formulating the large deformation elasticity theory and for verifying and applying the theory extensively to general nonlinear continua in the areas of viscoelasticities, electromagnetics, and thermodynamics.”

BY G.I. BARENBLATT AND D.D. JOSEPH

RONALD S. RIVLIN, one of the great applied mechanicians of the twentieth century, died at the age of 90 on October 4, 2005, at his home in Palo Alto, California, where he and his wife, Violet, had recently moved to be near John, his only son, daughter-in-law Susan, and grandson Michael. Ronald Rivlin will be remembered not only for his great scientific work but also for his remarkable personality, his wit, and his dedication to speaking the unvarnished truth.

Born in London on May 6, 1915, Rivlin graduated from St. John’s College, University of Cambridge, with a B.A. in physics and mathematics in 1937 and a doctorate (Sc.D.) in 1952. He began his career as a research scientist at the General Electric (GE) Company (1937–1942), where he worked on the first commercial television receiver. From 1942 to 1944, Rivlin worked at Telecommunications Research Establishment.

In 1944, he moved to the British Rubber Producers Research Association (BRPRA), where he pursued his interest in viscoelastic liquids. His decision to move to BRPRA was influenced by L. Treloar, whom he had met while still at GE, and the normal-force-driven rod-climbing experiments of Karl Weissenberg he witnessed at BRPRA.

Rivlin began his career in academia in 1953, when he became a professor of applied mathematics at Brown University, where he taught and conducted research until 1967. In 1963, he co-hosted, with R.S. Marvin, the Fourth International Congress on Rheology, in Providence, Rhode Island. In 1967, Rivlin moved to Lehigh University, where he remained until his retirement in 1980.

Rivlin made crucial contributions to the theories of finite elasticity, stability, constitutive equations for elastic and viscoelastic solids and fluids, internal variables, non-Newtonian fluids, electromagnetism, fracture, waves of linear viscoelastic materials, and crystal physics. Unlike his academic competitors, however, he did not publish books, so his intellectual legacy is distributed among hundreds of papers written over a period of 60 years of exceptional scientific productivity.

His colleagues, concerned that without books his seminal contributions might dissolve into the huge ocean of scientific literature, collected and published his work, together with an extended autobiographical sketch of his personal recollections and amusing comments on the dark side of academic life. As he said, “God created the professor, and the devil created the colleague” (Collected Papers of R.S. Rivlin: 2 vol., edited by G.I. Barenblatt and D.D. Joseph).

Rivlin is one of a few giants who created the branch of theoretical physics and engineering now known as nonlinear continuum mechanics. Much of his work deals with fundamental problems that were being investigated by specialists in mechanics, such as William Prager and Daniel Drucker at Brown University; however, Prager and Drucker had little or no influence on Rivlin’s work.

Clifford Truesdell, on the contrary, had a great deal of influence on Rivlin. Truesdell was the leader of a group of talented mechanicians and mathematicians who called their work “rational mechanics.” In the early days, Rivlin and Truesdell had cordial relations based on mutual respect. Later, their relationship deteriorated, although many have traced their conflicts back to the 1960s. Truesdell’s followers, especially Walter Noll, were encouraged to develop mechanics

as an axiomatic subject in the spirit of David Hilbert. Rivlin’s approach was to combine deep theoretical analysis with concrete practicality.

Rivlin was one of the creators of the theory of large elastic deformation, based on the theory of neo-Hookean and Mooney-Rivlin solids. Rivlin’s work on the deformations and strengths of rubber and rubber-like materials, which began early on in his career under the influence of Treloar, had tremendous implications for real-world applications. Whereas the classical mechanics approach of applying linear theory of elasticity did not have practical applications, Rivlin, with unsurpassed elegance, overcame the formidable difficulties in understanding the finite deformations characteristic of these materials. His exact solutions are universally recognized as a tipping point that demonstrated to the engineering community that rigorous mathematical results for nonlinear and large deformations could guide engineering design. Today, Rivlin’s work provides a mathematical foundation for a wide variety of applications.

In 1953, Rivlin, with A.G. Thomas, published a paper on the rupture of vulcanized rubber in which, by simple but ingenious experiments and by drawing freely on the results of his earlier work on finite-elasticity theory, he established the application of the Griffith criterion for fracture to vulcanized rubber. Griffith’s theory requires that the specific energy of crack propagation be a constant, although, under certain assumptions, it can be treated as a function of the rate of crack extension. This essential paper (in a research field now highly developed) showed the interrelations among the rupture, fatigue failure, tensile strength, and other properties of elastomers and other high-polymeric materials and led to the field of fracture-mechanics research on elastomers. The 50th anniversary of this great work was celebrated at a special conference called “Fracture Mechanics and Elastomers: 50 Not Out” held in 2004 at the Rubber Institute in Hertford, U.K.

Rivlin’s work figured prominently in the development of constitutive equations for non-Newtonian fluids. The Reiner-Rivlin equation (stress is a quadratic function of the

rate-of-strain tensor) was an early, non-Newtonian constitutive equation, perhaps the first that could properly be called “frame-invariant.” This had been proposed by Markus Reiner based on phenomenological arguments; Rivlin deduced the same equation as the mathematical form consistent with stress being a function only of the rate-of-deformation tensor and the independence of the calculation from superposed rigid rotation (frame-invariance). Rivlin’s name stands with those of Oldroyd, Ericksen, Green, Coleman, and Noll as a fundamental contributor to the development of modern constitutive theories of elastic liquids.

Next: George A. Samara »
Memorial Tributes: Volume 12 Get This Book
×