Get This Book
Visit NAP.edu/10766 to get more information about this book, to buy it in print, or to download it as a free PDF.
« Previous: Dudley A. Saville
Page 260 Share Cite
Suggested Citation:"Milton Clayton Shaw." National Academy of Engineering. 2008. Memorial Tributes: Volume 12. Washington, DC: The National Academies Press. doi: 10.17226/12473.
× 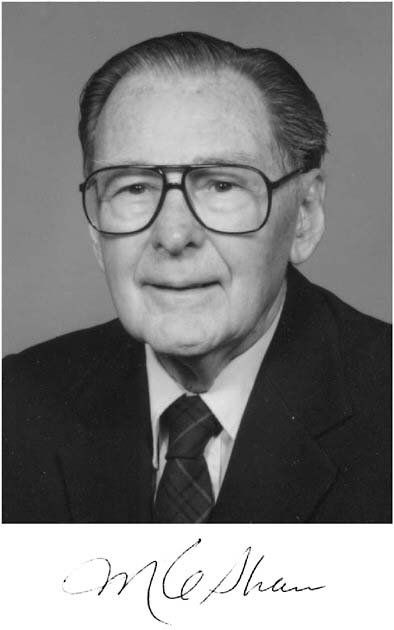 “For contributions to chemical synthesis, lubrication and bearing design, and machine tool design and performance.”

MILTON SHAW, a distinguished and influential educator in manufacturing engineering, died on September 7, 2006, at the age of 91. He was elected to the National Academy of Engineering (NAE) in 1968 for his contributions to chemical synthesis, lubrication and bearing design, and machine tool design and performance.

Shaw was born in Philadelphia, Pennsylvania, on May 27, 1915, to parents who had little formal education but were hard workers and instilled in him a solid sense of values. As a boy, he was active in the Boy Scouts; he became an Eagle Scout and then a Sea Scout. When he finished high school, his parents borrowed against his father’s life insurance so he could enter a five-year cooperative program at Drexel University leading to a B.Sc. in mechanical engineering, which he received in 1938. For six months of each of the second, third, and fourth years, he worked in industry; he also joined the Reserve Officers Training Corp. His experiences in these programs were invaluable, and the wages he earned offset his expenses. Upon graduation, he was commissioned a second lieutenant in the U.S. Infantry Reserve.

Shaw graduated during the worst part of the Depression when jobs of any sort were difficult to find. Fortunately, a physicist from the University of Cincinnati came looking for an

engineering graduate willing to study chemistry, physics, and mathematics in the College of Liberal Arts while conducting basic research on the development of a new line of cutting fluids. In return for being able to work as a mechanical engineer, Shaw was willing to start over as a liberal arts student, with an emphasis on chemistry. This unique cooperative program was sponsored by the Cincinnati Milling Machine Company (predecessor of Cincinnati Milacron).

In his first year, Shaw studied all of the material required for an undergraduate chemistry major. In the next three years, he took every available graduate course in chemistry and some in physics and mathematics. In 1942, after writing a doctoral thesis on the chemical aspects of cutting-fluid action, he received his Sc.D. As a result of his interdisciplinary studies, a combination of engineering and physical sciences became the foundation for his research.

Late in the fall of 1941, as he was finishing work on his degree, he was offered and accepted an assistant professorship at the Massachusetts Institute of Technology (MIT). However, a few days after the attack on Pearl Harbor, his future boss at MIT called and told him to report immediately to Langley Field, Virginia, to work in the Engine Division of the National Advisory Committee for Aeronautics (NACA), later NASA. In the spring of 1942, he moved to the Lewis Laboratory near Cleveland, where he worked his way up to the position of chief of the Materials Branch at NACA.

Early in 1946, Shaw was finally able to return to his teaching position at MIT, where, with strong support from industry, he established a first-class materials-processing research program. The primary focus of the program was on metal cutting and grinding, and doctoral students working under his supervision produced numerous high-quality research papers on a variety of problems, such as grinding-process temperatures, the temperatures generated ahead of the cutting tool in machining, measurement of forces and the number of cutting points in grinding, the influence of chip thickness on size effects, and the dynamics of chip formation and fracture. Thus Shaw became a world leader in research on metal cutting and grinding, and

students from all over the world began to seek positions in his laboratory.

In the fall of 1952, Shaw made his first trip abroad, visiting laboratories and delivering lectures all over Europe. In the spirit of the Organization for European Cooperative Development, he became a founding member (and the first U.S. member) of the College International pour l’Etude Scientifique des Techniques de Production Mechanique (CIRP), an organization in which he remained active and a leader for more than 50 years. CIRP was organized so that large and small countries could participate equally. In English, this international institution is known as the International Academy for Production Engineering Research.

In 1961, Shaw moved to Carnegie Institute of Technology (subsequently Carnegie Mellon University [CMU]) as professor and head of the Department of Mechanical Engineering. During his tenure at CMU, his main areas of focus were form-and-finish grinding (FFG) and stock-removal grinding (SRG), the use of single grains to evaluate grinding performance, and work on high-speed grinding sponsored by the Abrasive Grain Association, the Grinding Wheel Institute, and the National Science Foundation. In addition he worked on lubrication and wear, the fracture of metals and ceramics, hardness testing, and plastic indentation. With a grant from the National Science Foundation, he established the Processing Research Institute, a forerunner of NSF engineering research center where a university interacts extensively with industry. Shaw retired from CMU as university professor in 1978.

He then moved to Arizona State University (ASU) as professor in the Department of Aerospace and Engineering Science. His work at ASU led to more insights into the cutting and grinding of hard materials, ceramics, rubber elasticity, and fracture. In 1985, he became professor emeritus at ASU, but he continued to work with graduate students there until 1998.

Shaw had a unique ability to transfer knowledge from a given field into a new direction or in support of a new application and to develop basic scientific explanations for practical observations. For example, in his Ph.D. dissertation on

mechanical activation, he used a metal-cutting setup to initiate chemical reactions that are difficult to initiate and control and are extremely dangerous (known as Grignard reactions). He developed a “mechanical fuse” by applying metal-cutting principles to the bumper of an automobile to absorb energy during slow-speed impact. Similarly, he incorporated an extrusion die near the tool face to draw the metal-cutting chips to form copper wire. He used simple experiments, explanations, and modeling to demonstrate phenomena of concern, and he encouraged his collaborators to rely on their expertise to solve problems instead of developing elaborate proposals for what to do and how to do it. In this way, the researchers who worked with him produced practical results.

Shaw published more than 300 technical papers and four books and edited the proceedings of several conferences. He held 19 U.S. and foreign patents and was a consultant for some 150 companies in the United States and abroad. His classic book, Metal Cutting Principles, was originally published in 1953 by MIT Press and was republished by Oxford University Press (OUP) in 1984; a revised second edition was published by OUP in 2005. Shaw was coauthor, with Fred Macks, of The Analysis and Lubrication of Bearings (McGraw-Hill Book Company, 1949) and author of Principles of Abrasive Processing (Oxford University Press, 1966) and Engineering Problem Solving: A Classical Perspective (Noyes Publications, 2001). The latter is an introduction to engineering for students trying to decide which branch of engineering to pursue.

Toward the end of his life, Shaw was still investigating questions he had not fully answered, such as the role of micro-cracks in machining, size effect, and thermoplastic shear instability versus brittle fracture in the machining of hard materials. His last paper, published in 2003, was an investigation of the size effect in metal cutting.

Milton Shaw’s 60 plus years of pioneering research led to improvements in the productivity, quality, and cost of material-removal processes that benefited industry and society in general. His research results led to many important technological developments, and his scholarship was an inspiration to countless engineers and educators. A role model and mentor to researchers in the United States and abroad, he brought dignity and respect to manufacturing-engineering research and education.

Mary Jane Shaw, his wife of 67 years, a college graduate in

romance languages, typed and proofread all of his manuscripts. The Shaw home was always open to students from all over the world, on a personal and professional level. The Shaws helped rebuild bridges between the United States and Germany and Japan following World War II and opened doors for many students from India. They also traveled widely and made friends all over the world.

Shaw was as active at home as he was at the university. In the early years, he undertook several home improvement projects: designing and constructing an underground garage, adding two bedrooms and a bath to the house, and building a garage for his parents. He was an avid gardener and always kept the yard in beautiful condition. He involved both family and students in boating, water skiing, and snow skiing. He took an active role in guiding his children’s and grandchildren’s education and ensured that they had the resources to pursue their interests at the best colleges and universities. He also encouraged them to travel abroad, to become familiar with other cultures and ways of life. Shaw loved children and, in his later years, he enjoyed playing with his great-grandchildren. He saw in them and their exuberance confirmation this new generation would continue on the course he had set, just as the previous ones had. He would have loved to witness that.

A few years ago, reflecting on the fullness of his life, Shaw wrote: “In looking back, there is little I would change. I have found it stimulating to work closely with young people and to see them mature and go on to take an important place in society. I believe this is the most satisfying aspect of my entire career.”

Next: Shan-Fu Shen »
Memorial Tributes: Volume 12 Get This Book
×